Every year, the truck and jeans capital of Wisconsin becomes home to the largest aviation gathering on the planet. Thousands of aircraft and hundreds of thousands of people converge on the usually peaceful burg, and thousands of its residents flee for other climes, leaving the keys to their residences in the hands of strangers (but these strangers are aviation people…so it’s OK). The entire city of Oshkosh turns its attention to the sky, and a large percentage of the population that stays in town supports the event known as AirVenture in one way or another. Whether it’s providing food service, driving buses, or helping out with traffic control, the local volunteers join the many other volunteers from around the world that make up the main event of the homebuilding year.

For many, the week of AirVenture is their primary vacation and has been for as long as they can remember. Every year, they trek to Camp Scholler or their other favorite haunt to spend time helping to set up, enjoy the show, and stay through teardown. And most of them pay to do so, directly, or through volunteer time. Many more people attend by ground than they do by air—and the number that attend by air is staggering. Anyone who has flown into Oshkosh knows the feeling of accomplishment as they clear the runway and hear, “Nice job yellow high-wing; welcome to Oshkosh!” 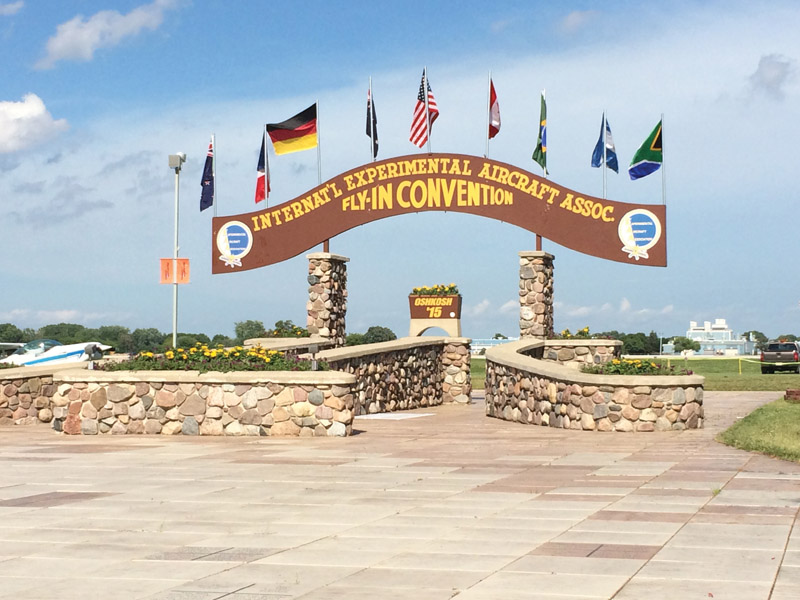 The famous brown arch at Oshkosh a day or two before the start of AirVenture.

What is it then that attracts people from all over the world to a formerly small Midwestern town in Wisconsin? What makes us all gather in one place to share food, conversation, and experiences? Why do we put up with the stress of the Fisk Arrival and wipe our brow with relief when it is complete? Is it the airplanes? Is it the shopping? No—it is more than that. Simply put, it comes down to the people. Nowhere else in the world can you mingle with so many aviation-minded humans for so long in one place. We flock together for the same reason we attribute to the birds: We share the feathers, the love of flying, the passion for aviation that has gone away for so many of the people on the planet.

Oshkosh, for me, is a mad, busy, tiring week of talking, meeting others, smiling—and collapsing each night for a few hours of sleep before charging back into the fray first thing in the morning. Eighteen-hour days rule, for there is so much to do and so many people to see and talk to. I must admit that I rarely see the airshow, looking up only when I hear something that sounds different: a small jet sailplane, the synchronized exhaust note of Lycomings, or the silence that accompanies a sailplane. (I’m not much for the overt noise of the big iron or the transonic whine of too-long props at too fine a pitch. But I respect that others find this to be the most exciting part.) No, the afternoon show is when I catch up with friends and those who will become my friends by finding the little knots of people who have likewise burned out on paying rapt attention to every single airshow act.

Slowing down to spend time with individuals at AirVenture can be difficult, but it is rewarding. You may be surprised at how many people you recognize by name from internet forums, type clubs, and chat rooms—people that you knew of, but never knew for real—until you joined them sitting in the grass under the wing of their airplane. For many, the show isn’t up in the air or in the vendor areas; it is out in the fields of airplanes, some with tents pitched beside them, others simply tied down with a lawn chair or two for company. Last year, I ventured to the far southern reaches of the show, a different place entirely from the big event of Oshkosh. It’s laughingly known as “Fond du Lac North” because it might be closer to the next town than to Oshkosh itself. The airplanes there nuzzle up against tall corn on new-mown grass, far away from the madding crowds. It’s a hike, but well worth it if you want some quiet time and good conversation with people who just want to be with their planes.

AirVenture is something different for everyone, of course. It has something for everyone—even those not crazy about flying machines. That is probably its greatest charm: the fact that it has a niche for all. You can attend for decades—for a lifetime—and still be hearing about cool things from other people that you never knew existed, all within the confines of the AirVenture grounds.

Why should you go? For one shining week, the city of Oshkosh opens its arms to this strange and wonderful community we call aviation—and how could you miss that?

Let’s Be Safe Out There

Last year’s arrival weekend at AirVenture was, to say the least, a challenge. With weather below minimums much of Saturday, arrivals were slow, and airplanes from across the continent were piling up at airfields a few hours from Lake Winnebago. Sunday morning saw an early morning thunderstorm pass through, with low clouds continuing until late morning when the clouds lifted and the sun began to peek through. With the clearer weather came a positive storm of aircraft, converging on Wittman Field from all directions. The result was more chaotic than anyone can remember, and the stories I heard of near misses and uncoordinated aircraft movements were enough to make me glad I had arrived on Friday. Airplanes were everywhere, headed in every direction—and some tried landing on the same piece of pavement from opposite directions at the same time.

This was not our finest hour. We need to do better. 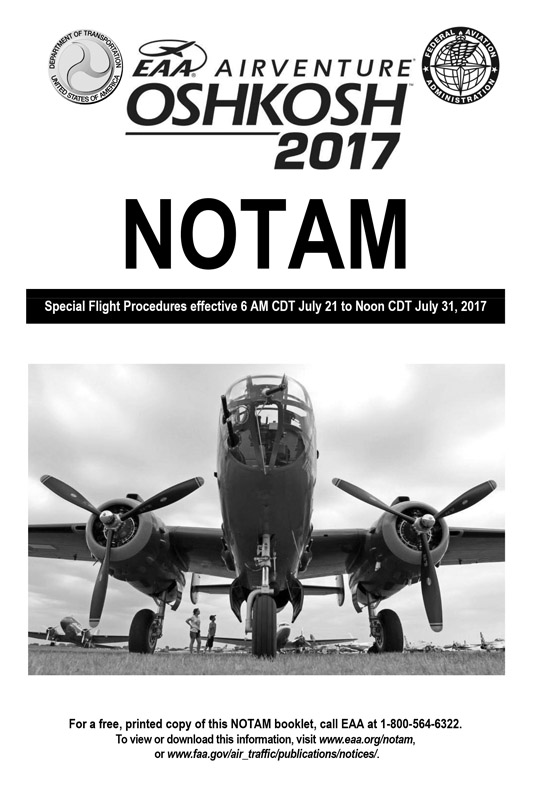 The 2017 NOTAM is now available online. It’s imperative that you read the latest version before flying into AirVenture.

The AirVenture NOTAM (Notice to Airmen), for those that have never read it—and that sadly appears to be many pilots who fly in each year—is thick. But the truth is, only a few of the pages apply to any particular pilot. The basic VFR arrival is really no different procedurally than arriving at any towered airport: Come up to the edge of the Class D airspace at a known point, and the tower directs you to a path to a runway on which to land. The difficulty has always been getting people to that reporting point (Fisk) in an orderly fashion without conflict. The mix of aircraft speeds makes it difficult for everyone to form up in a single-file line. The “high road, low road” path (for fast and slow airplanes, respectively) still puts everyone at the same point—with faster airplanes descending onto the slower ones, often under blind conditions. Pilots who rarely fly with a great deal of traffic become overwhelmed and forget what they have studied beforehand.

And then there are the ones who read the NOTAM years ago and haven’t glanced at it since, modifying their procedures based on discussions with others until, like the game of telephone, the procedure they use bears no resemblance to what they are supposed to be doing. Read and follow the NOTAM—it is what everyone is supposed to be using. But if you find it confusing or overwhelming, you still need to use it—ask questions until you understand. Here are a few things I’ve learned over the years that might make it simpler:

1. You need to be in line over the railroad tracks, on speed and altitude at Ripon—not after. The leg from Ripon to Fisk is not where you line up and sort yourself out; that is done before you cross Ripon. If you get cut off or slowed down too much between Ripon and Fisk, break out and come back for another try. You’ll get in, just a little later than you thought.

2. When you get to Fisk, you’ll be assigned a runway—either the east/west or north/south at Wittman. From that point on, consider those two as two separate airports, each with its own tower. Under no circumstances cross the boundary between the two unless directed by the tower, and they won’t do that. Last year, many broke this rule, and why no metal was bent is beyond those who watched.

3. If the field closes to arrivals and holding is required, consider doing what I do—go land somewhere else. The Green Lake hold fills up far too fast for my taste, and people don’t seem to know their right from their left—or clockwise from counterclockwise. There are lots of little airports within ten minutes’ flying time of Ripon. Go get some fuel, stretch your legs, and wait for the mess to sort itself out, then follow in a calm, cool, collected manner. Yeah, your arrival might be delayed by an hour—but you’ve got a week, right?

4. Remember to let the other guy have the right of way—always. You’re good, you’re experienced, you know what’s going on, and they might not. Be courteous, let them have their way, and follow up later. It’s far nobler to give way than it is to push ahead and make a bad situation worse for everyone. Never be in such a hurry that you put others at risk—knowingly, or unknowingly.

Keep your head on a swivel, give way if you have to, and have fun. We’ll see you safely on the ground at the biggest aviation event of the year!