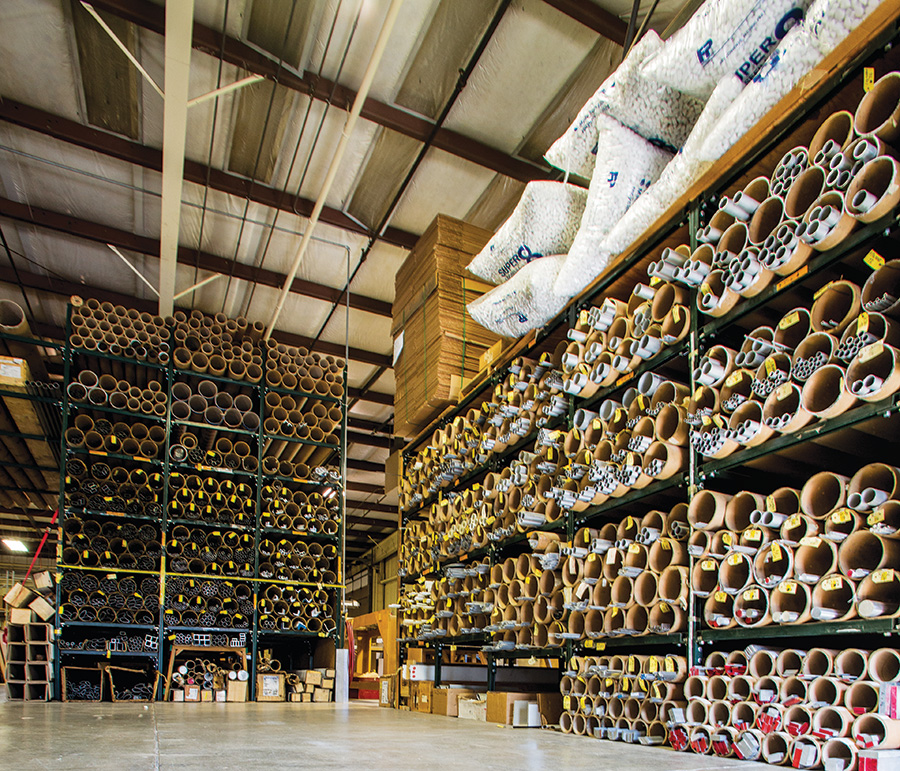 Home to Wicks Aircraft Supply & Motorsports is a 30,000-square-foot steel-sided khaki rectangle at 410 Pine Street in the small central Illinois town of Highland, population 9860. Climbing the awning-shaded steps to the main entrance, visitors and customers enter what is best described as a friendly small-town hardware store with a serious fixation on aviation. 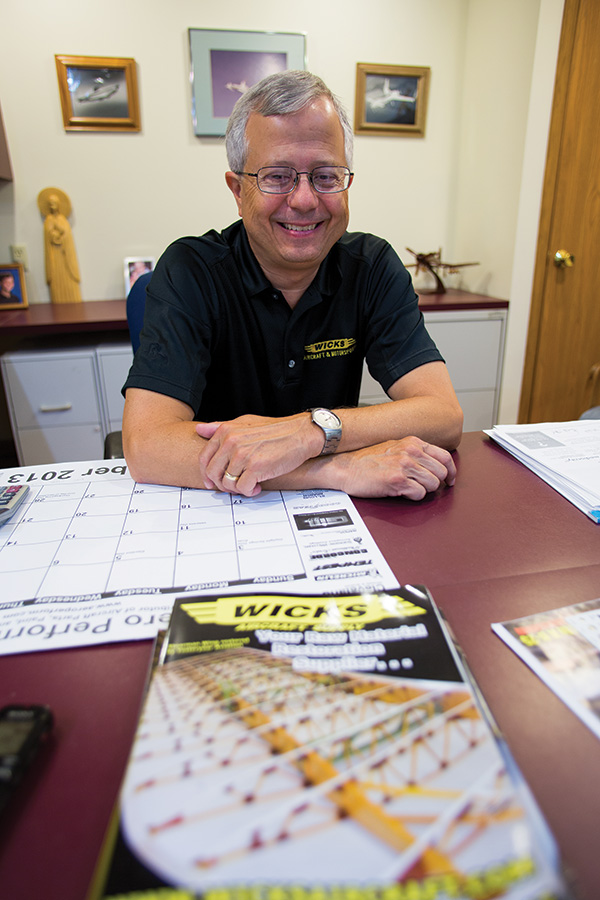 Covering several hundred square feet, the tidy store provides a snapshot of the company’s products that range from the time-tested raw materials of flight, 4130 steel and Sitka spruce, to 21st-century avionics and the latest in LED aircraft lights and lithium batteries. Photos of customer airplanes fill a bulletin board not far from the framed lifetime membership certificate for Martin M. Wick, EAA 162301.

From Pipe Organs to Aircraft Parts

Wicks Aircraft Supply was born in 1974, the offspring of the Wicks Organ Company, a family business founded by three brothers in 1906. One of five kids, Scott is third generation and the company’s second president. It was his father Martin who “had a love and passion for flying,” Scott says, that gave the company wings.

Wicks Organ was in the aviation business during WW-II, when Martin, who passed away in 2002, started work. Unable to build organs, which use aircraft-grade Sitka spruce for their many wooden parts, Wicks put its artisans to work building wooden wings for airplanes like the PT-19, Scott says. Returning to organs after the war, Martin became president in 1948 and spent a lot of time in the air. In the organ business, “churches are our showrooms,” Scott says, and his father would fly customers from one to the other.

Martin’s right-hand man and organ shop supervisor was Dick Hasse, an airframe and powerplant mechanic. In 1973, he built a Bowers Fly Baby, and “my dad found that intriguing,” Scott says. In early 1974, “they learned about the KR-2 and said, ‘Hey, we can build this.'” So they did, in just three months. Wicks displayed the pristine homebuilt at EAA Oshkosh that year, handing out organ company cards to everyone interested, and the phones rang often in the months that followed. With Ken Rand’s blessing, Wicks started selling raw material and hardware kits and offering technical assistance. “I think we sold a hundred KR kits in two years…and 40 years later, here we are,” says Scott. 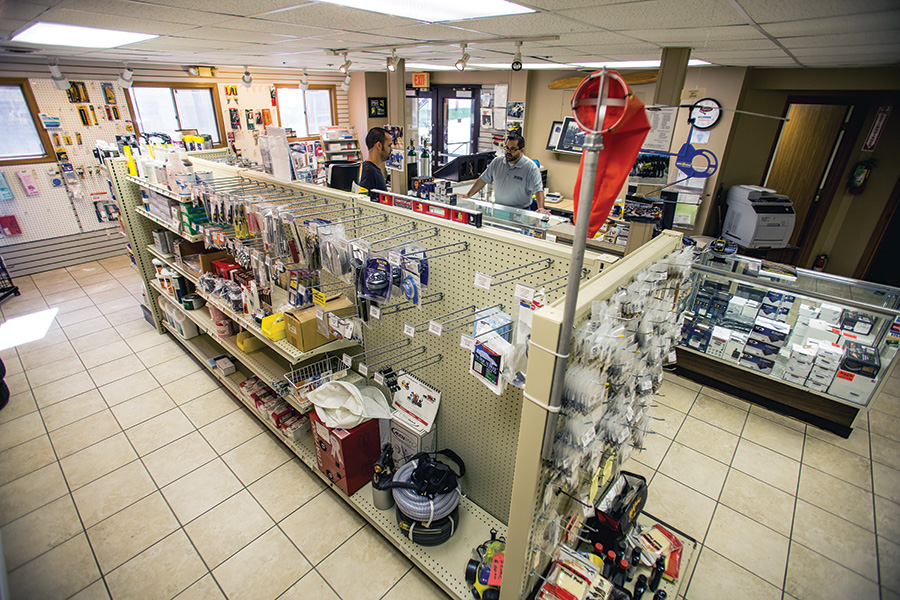 As he’s recounting the company history, a customer walks into the store, and another trait of small-town hardware stores is immediately clear as Eric Cleveland, Wicks general manager, offers a warm greeting and offer of help. The man pulls out a list and Eric starts filling it.

Highland is 35 miles from downtown St. Louis, Missouri, “and we get a dozen or more walk-in customers every week,” says Scott. “A lot of them have questions, want to see the part, and that’s something you can’t do on the web site.”

Phone and online orders represent the majority of the company’s business, and they get the same small-town service in that “customers don’t have to navigate their way through three different levels to get help.” The only real difference between calling and visiting is walking into the store and seeing something on display that’s not on your shopping list, like the 32-inch-long aerosol spray can hose that would be perfect for an airplane’s hard-to-reach recesses, and immediately acting on the thought, “I could use one of those.” 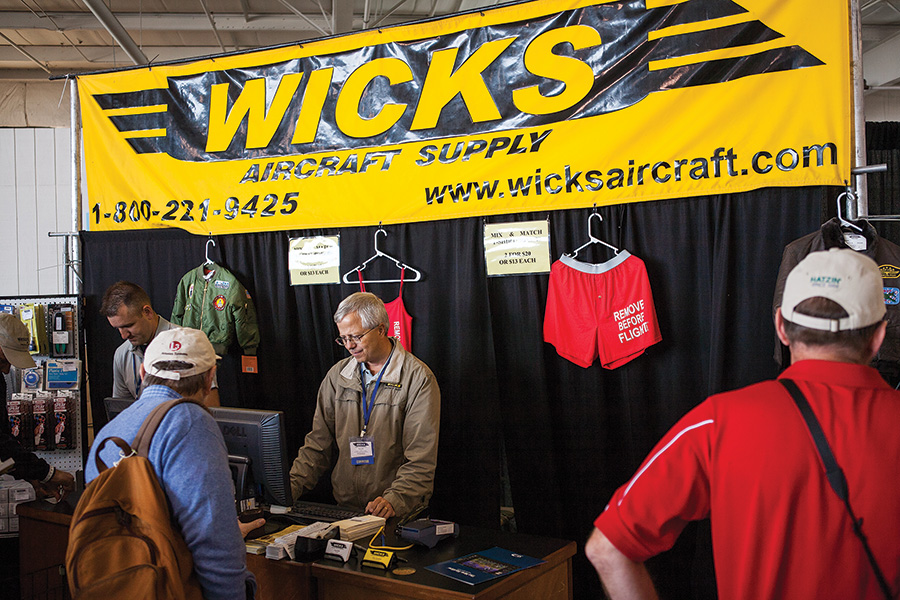 Wicks is a long-time EAA AirVenture exhibitor, and half of the company team travels to Oshkosh every year.

When a customer poses a question beyond the knowledgeable reach of those on the phones, the query is passed to Keith Gibbs, who helped Scott build a Titan Tornado and RV-8. Typically, he’ll get a half-dozen tech calls a day, but some days the question calls seem endless. “Most of the questions usually have something to do with fittings,” says Keith, adding that the callers don’t fully understand the differences between tube and pipe threads. “Or they need some measurements to see if a part will fit, so I’ll pull it off the self and measure it with a micrometer, if necessary, to answer their question.” 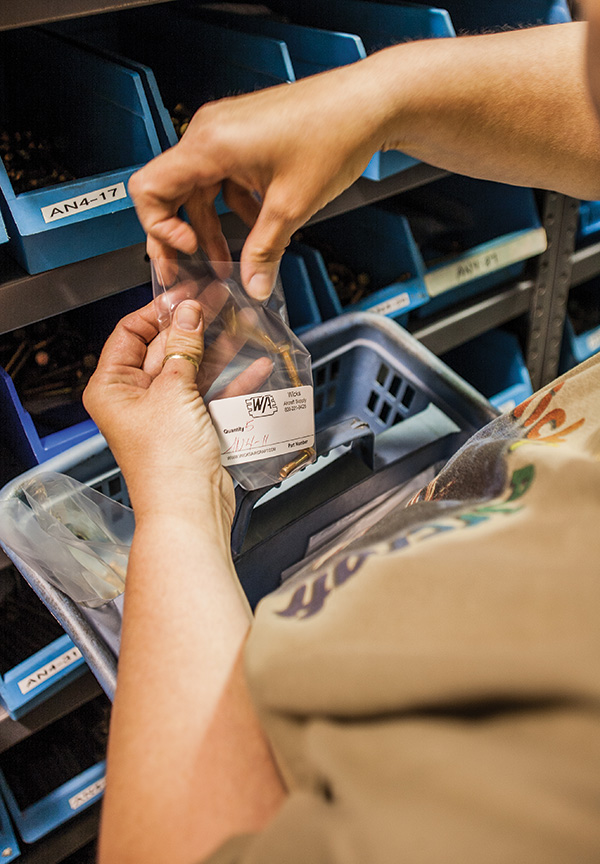 When the printer spits out an order, part pullers label plastic bags that will hold small parts like fasteners before walking the aisles to collect them.

When he’s not on the phone, Keith does just about everything else, from picking parts to packaging and shipping. On a team with just 12 members, every position is important, Scott says. Cross-training prepares each member of the team to handle three different jobs. From purchasing, phone reps, and parts pullers, to receiving, packing, and shipping, the absence of any one of them means customer packages won’t ship that day.

Perhaps more important than covering each other for vacation or illnesses, the cross-training demonstrates how every employee’s primary effort affects everyone else. And it builds a self-supporting team. When a ream of orders flowed out of the warehouse printer late one Friday afternoon, a half dozen people formed a team to fill the orders and get them on the UPS truck before quitting time. 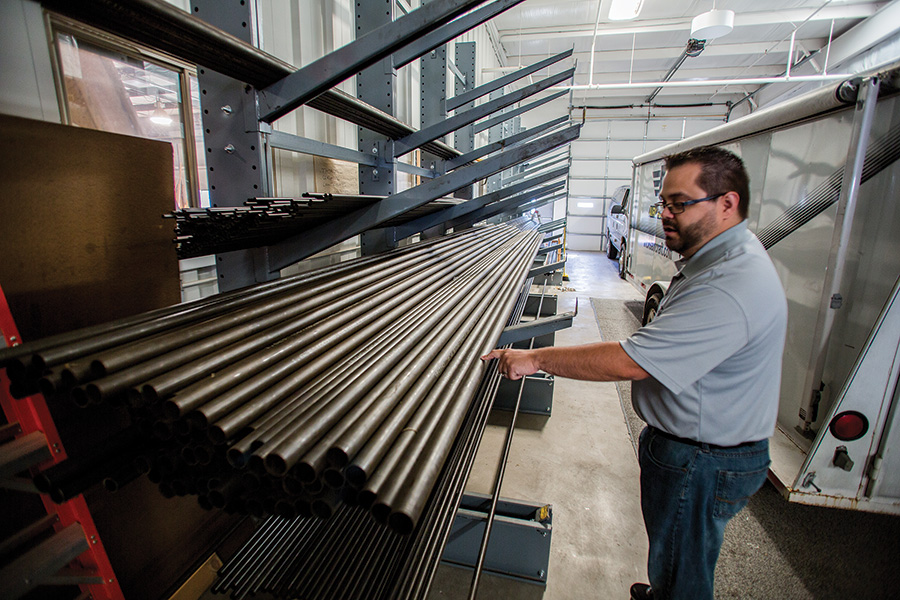 Changing With the Times

A lot has changed over the last 40 years, and Wicks has adapted to the cultural and financial consequences of an ever-evolving aviation market and economy. The business started by supplying the raw materials amateur builders needed to create airplanes from plans. Once a majority, plans builders are now a small minority to kit builders, and Wicks meets their needs with everything from make-and-model-specific hardware kits for a dozen different designs, to the components, accessories, and electronics needed to complete a project. 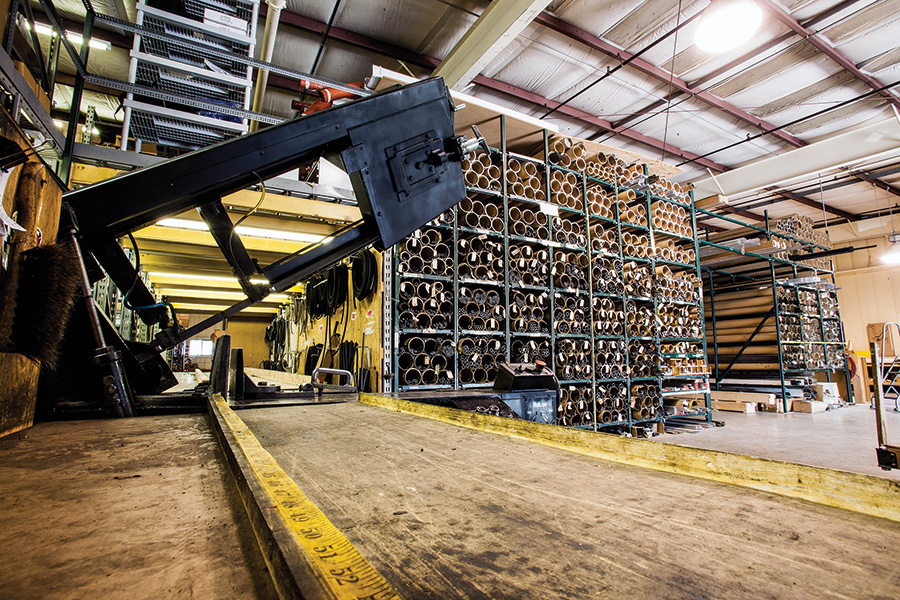 A pivot-arm band saw awaits its next order of 4130 tubing to be pulled from the racks.

Kits have been good for business—and aviation as a whole—because they have helped the industry grow. Which is why, Scott says, “I’m doing as much, if not more, business as ever” in raw materials, steel tubing, wood, and composites.

Over the past few years, there seems to be a surge in Pietenpol projects, he says, probably because they are so easy and inexpensive to build. While the number of scratch builders has declined, the number of people and A&Ps restoring certificated airplanes have taken their place, Scott says, and the kit manufacturers themselves have become customers. “We supply all the metal for the Bearhawk kits.” 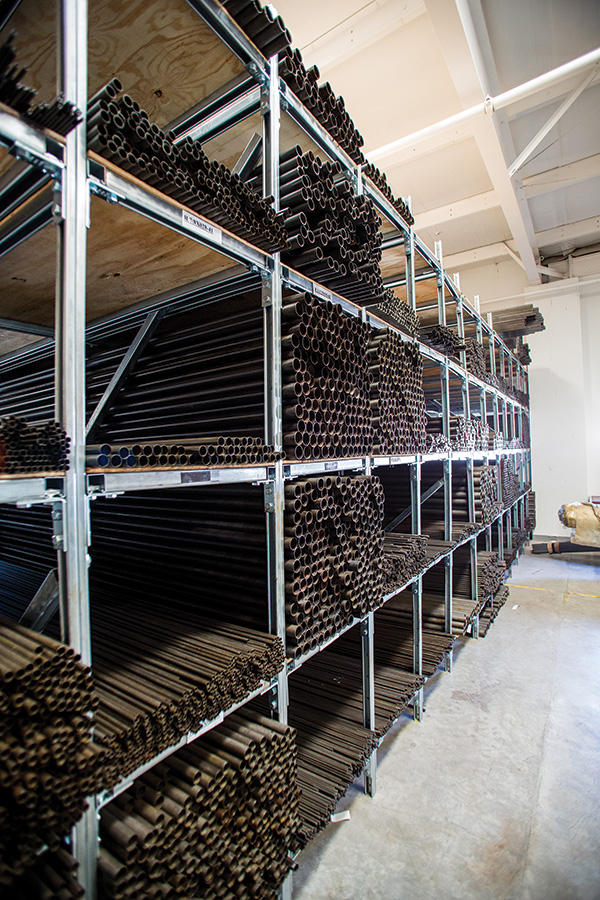 When Wicks bought the inventory of a retiring 4130 tubing supplier, it had to build an addition to hold it all.

Aviation isn’t the only consumer of aviation’s raw materials. Like airplanes, builders of motorcycles and racecars need a reliable source of 4130 steel tubing, and as this business grew over the years, the company added “Motorsports” to its name five years ago to recognize—and welcome—these craftsmen. “We didn’t really add any inventory,” said Eric Cleveland, Wicks’ general manager, who started as a parts picker in 1996. The exception is the thick-wall 4130 tubing preferred by those who build car chassis.

“Chrome-moly steel is a big thing for us now,” said Eric. Not long after the economic meltdown of 2008, Wicks acquired the abundant inventory (and built a warehouse addition dedicated to it) of another supplier, a family business without a succession plan once the founder retired. 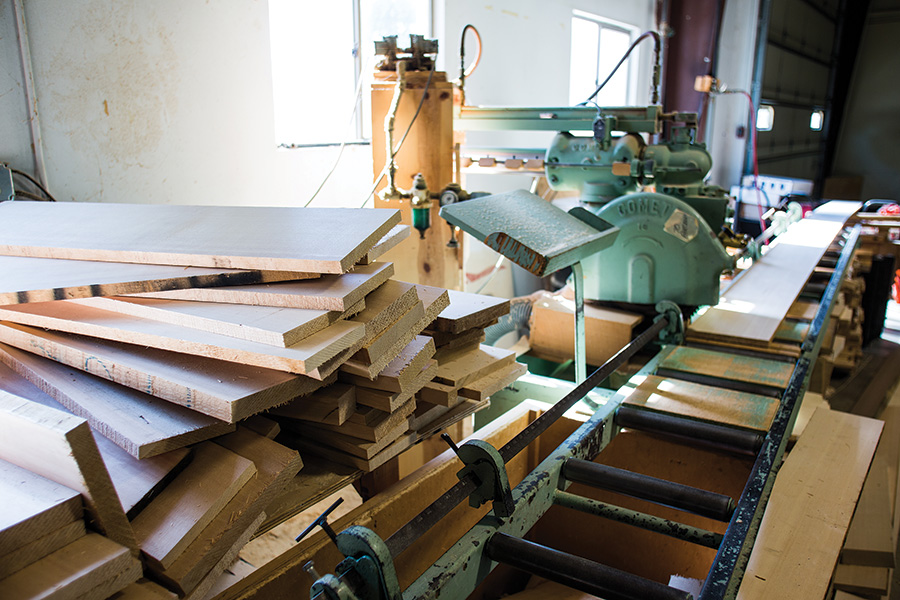 Because its standards surpass the Sitka spruce mil-spec, Wicks collects a fair amount of different size trimmings after cutting the raw materials to meet a customer’s order.

There are no hidden caches of Wicks’ other raw material, Sitka spruce. “It’s still hard to get,” said Scott, and it doesn’t come cheaply. “Our best sources are the suppliers we’ve been working with for years. There is a mil-spec for aviation-quality spruce that allows for some pitch pockets, knots, and off grain, but customers don’t like to see those things, and when they do, they send it back. So we don’t send it out.”

The spruce mil-spec calls for eight grains per inch, Eric added. “Ours usually has a lot more than eight grains per inch. The big problem in achieving that is increased waste. Because we’re so picky, we cut around the defects. That’s tough on the guys cutting it. The surface looks good until the final sanding reveals a bad spot, so they have to get another board and start all over again.” 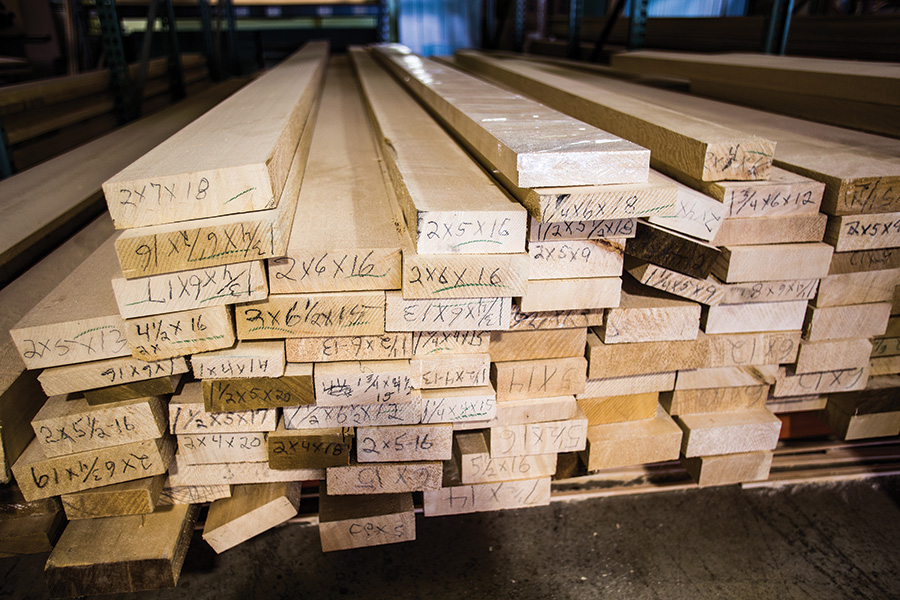 Sitka spruce spar stock awaits an order by an aircraft builder or restorer.

Wicks sells some of the spruce that doesn’t make the aviation cut to Wicks Organ, which uses the wood throughout the instrument’s structure, such as the chests that hold the organ’s pipes. Since his mother retired and his younger brother Mark got a job flying several years ago, Scott has been president of both companies.

The Latest and Greatest

It seems clear that aviation is Scott’s dominant enthusiasm. An instrument-rated commercial pilot with multi-engine rating, he started flying in high school.

Turning toward the prominent display of Aerovoltz lithium batteries, Scott eagerly explained that Aerovoltz employed lithium iron phosphate, which has none of the heat problems associated with lithium polymer batteries. Rated at 13.6 volts, the 16-cell Aerovoltz delivers 500 cold cranking amps, the lead-acid battery equivalent of 28 amp hours—and it weighs three pounds. For Experimental/Amateur-Built aircraft only, said Scott, “but a number of glider pilots use them to run their radios.” He added that the Aerovoltz batteries require a balanced charger designed specifically for them. 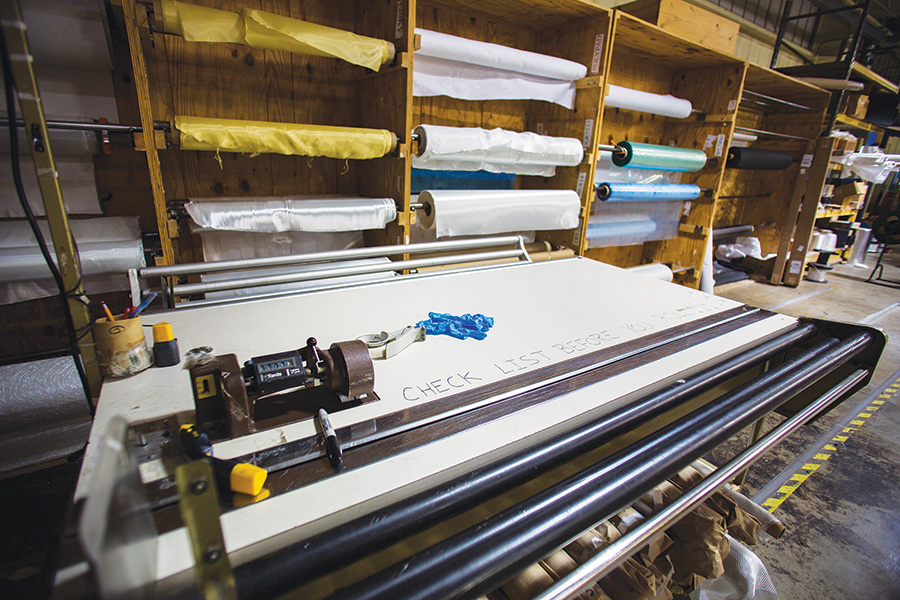 To cover an airplane, Wicks offers PolyFiber and Stewart Systems products and often holds workshops on their use at its facility. 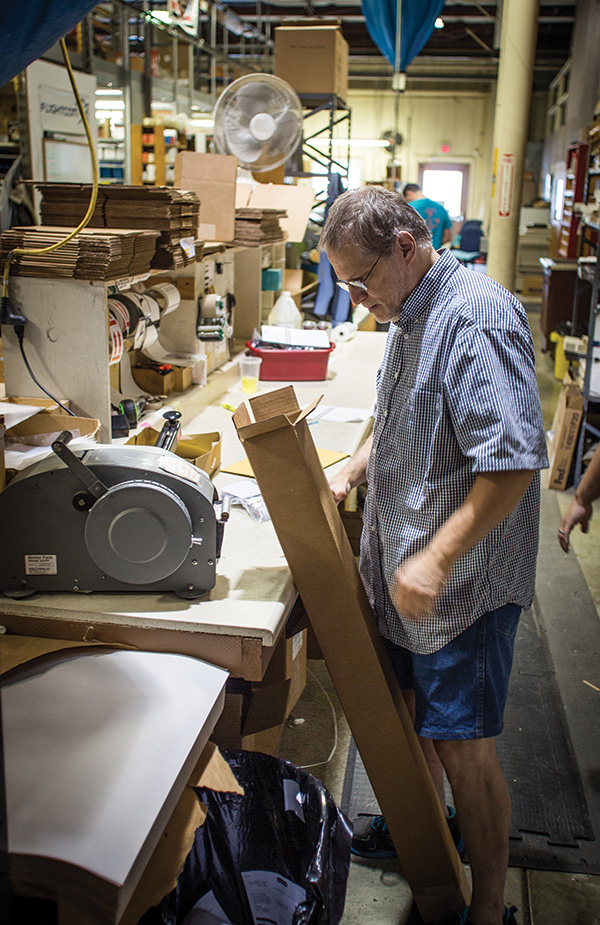 With a small team, everyone at Wicks is cross-trained. When he’s not involved with his primary responsibility, IT manager Ray Haynes helps pick, package, and ship orders.

Scott was equally enthused about the addition of Stewart Systems’ “green” water-based aircraft coverings. “We’ve done workshops with them and other covering systems here” at the Wicks facility in Highland. There isn’t a set schedule for them, he added, but customers can find out about them on the Wicks web site.

Time will tell if there will be a fourth generation in the Wicks family businesses. Scott and his wife Debra have four kids: three sons and a daughter who is a music education major at Xavier University. During breaks she works on organs, often “voicing” or tuning an organ’s pipes. The boys are interested in different aspects of the business as well, Scott says, “So we’ll see.” As his parents did with him, Scott and Debra will let their children decide what they want to do. “All my other siblings also have children, so they may be entering the business as well.”

No matter who and how many of the fourth generation continue, all will surely proceed in the family tradition of courtesy and dedication to service and high quality. 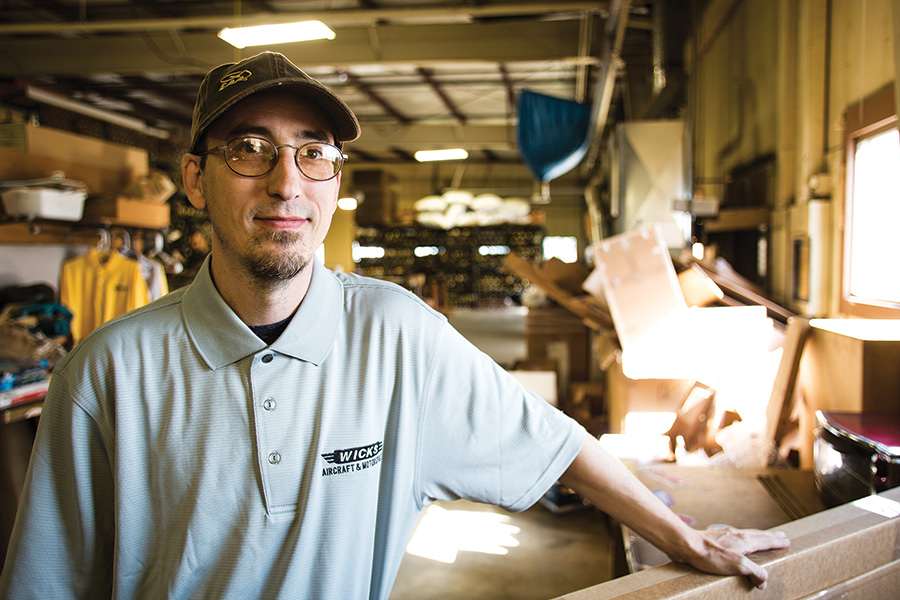 Tom Wilson - November 3, 2020
0
Overheard comments are often the most interesting, probably because your brain is in a...