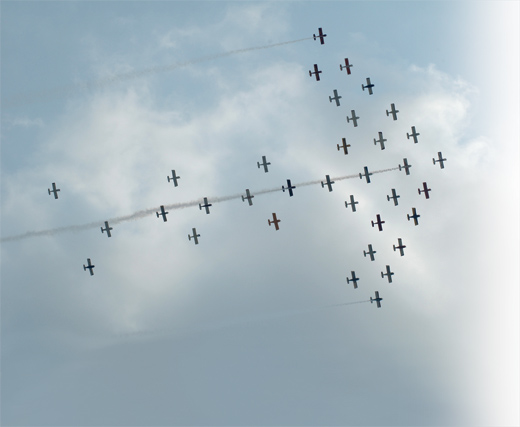 A group of four Van’s RVs are precisely lined up at the runup area at Chino Airport in Southern California. The flight lead, Gary “Condor” Sobek, is looking up the line of RVs waiting for the hand signal that the flight is ready to go. When the runups are complete and satisfactory, a “thumb’s up” is passed down from the last RV (number four) to three, to two, to one. 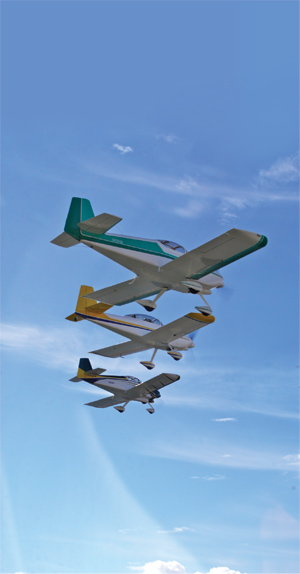 Flight lead then calls: “Chino tower, Raven flight of four RVs is ready to go 26 Right; request left turn out.” The tower responds: “Raven flight, cleared for takeoff; left turn out approved.” The four RVs taxi out and line up for a four-ship takeoff in a slightly acute—the wingman’s leading edge even with the trailing edge of lead or, in the case of number four wingman, even with the trailing edge of number three—strong right “fingertip” position, and look for the lead’s hand signals. Lead indicates with his raised hand and swirling index finger indicating that throttles be advanced to 1700 rpm; lead makes an exaggerated head nod, and the flight of four starts its takeoff run.

Once airborne, the individual wingmen close to their correct positions, and the flight begins its turn and climbs toward the practice area over Lake Matthews.

A Day in Our Lives

What you’ve just read about is nowhere near the beginning of our preparations for formation practice, but it is the most visible element to bystanders. It’s fair to ask why we do it, but the answer can’t be summed in a single word (though “fun” comes closest). We do it for a variety of reasons. Formation flying is complex and demanding; we train for it rigorously and with greater detail planning than most pilots ever commit. Like any demanding exercise, when it’s done well, formation flying is tremendously rewarding. Finally, it’s a social event—we as a group join to talk about flying, sure, but sharing such an activity tends to strengthen our bonds as friends. 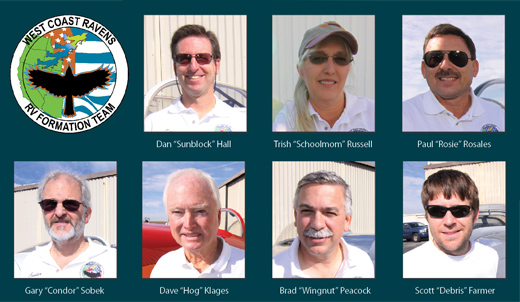 During a formation flight, a series of hand signals or plane movements, such as rocking the wing, moving the rudder back and forth rapidly, or moving the elevator up and down rapidly, are used by the flight lead to communicate the various configurations of the formation. The mantra “A quiet flight is a good flight” is the rule, and radio communications are held to a minimum.

We’ve flown locally around Chino with as many as 16 planes during the “pre-show” at the Chino Planes of Fame Airshow; and at the annual Aviation Nation at Nellis Air Force Base in 2010, we had a total of 22 planes. The really large flights are an ensemble of RV formation groups from all over the country. All the members of the flight are “carded” FFI wingmen, flight leads, or check pilots. These flights are all lead by Stu “Falcon” McCurdy, and he does a wonderful job of leading the group. 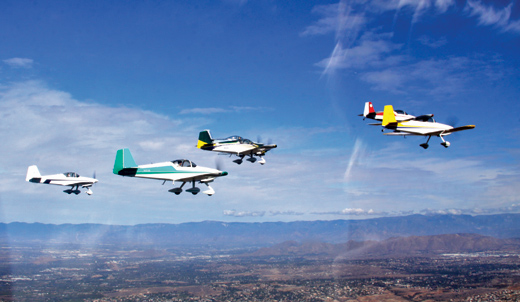 This is the Double V formation with six ships. 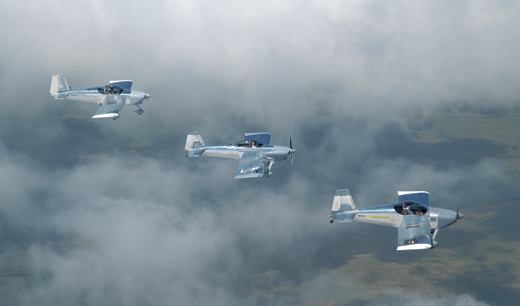 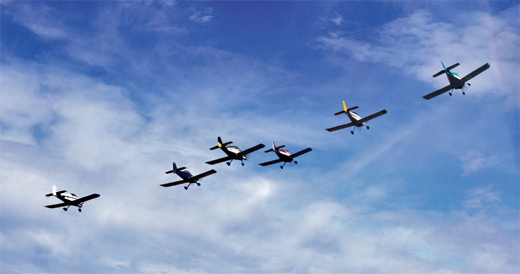 This is the Delta formation with six ships. 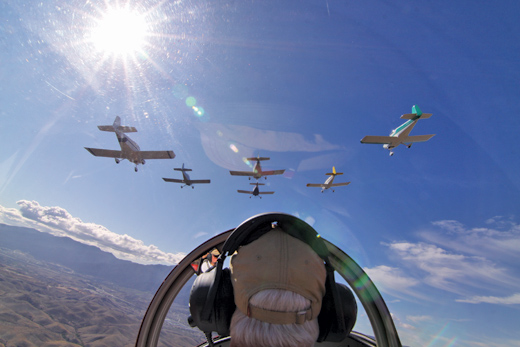 This is an interesting view of the Double V formation. The RV-8 used as the camera platform here is not part of the Double V, but was positioned to get the shot.

The flight of four RVs does the various formation configurations and then maneuvers in these positions through various turns, climbs and dives such as lazy eights. The flight is configured in an Echelon and then the lead signals for a break or pitchout and a rejoin. The RVs are in an extended trail position following the break, where the RVs are approximately 500 to 800 feet in trail. The rejoin is accomplished when the flight lead signals by wagging his wings and then turning in the direction of the rejoin, either right or left. The rejoin is accomplished by the wingmen individually turning their planes in a slightly tighter arc (radius) than the lead, establishing a reference picture by visually placing their planes in a position where the lead’s vertical fin is superimposed over the outboard wing, and individually flying the arc up for the rejoin. This is one of the most challenging maneuvers, and it takes much practice to do it correctly.

Once the rest of the flight has rejoined on the flight lead, the practice continues until it is time to return to the airport.

The flight of four RVs actually began 30 to 40 minutes before the flight taxied out, with a detailed brief by the flight lead, where the individual pilots/wingmen are assigned their positions as two, three or four, and all aspects of the flight, from beginning to end, including specific maneuvers, are discussed and agreed upon. At the completion of the flight, the pilots meet to debrief. 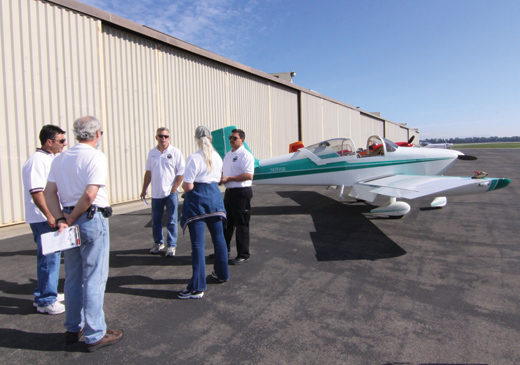 Each mission begins with a thorough briefing. Every formation to be attempted and contingencies for mechanical problems are discussed before anyone mounts up.

As the number of RVs and other Experimental airplanes increases, a great deal of camaraderie with other RV owners develops. Flying together for an outing or the $100 hamburger is a great deal of fun; however, whenever you fly in proximity to another airplane there can be risk. We know it, and we work to mitigate risk wherever possible.

Participation in a formation clinic, where you can meet experienced formation pilots and fly with them is a great and fun way to learn the formation standards and procedures, and to meet new friends with a similar interest. Check www.eaa105.org/Useful_Info/Useful_

Info.html for the various formation groups around the country.

The people I fly with are all good friends. We are lucky at Chino Airport, as there are more than 20 RVs based there, with a dozen active and flying about every weekend. We fly with other friends in the area from Cable, Torrance, Redlands, Riverside and Rosamond Airports, and several other airports in Southern California.

Bottom line: Formation flying is a lot of work, and requires skill, concentration, practice and plenty of patience. I think it makes us all better pilots, more in control of the airplane and proficient with precise, in-flight maneuvering. It makes the difference between a driver and a pilot.

I’ve known Dave Klages for several years, flown with him a bit, and by tangential association, have met most of the Chino formation crew. He is an enthusiastic builder and excellent pilot. A quick wit, ready smile and wry sense of humor do him no harm.

But something interesting happened before the flight that produced many of the photos for this story. He and the rest of the crew became perceptibly more serious as the briefing got underway. This briefing was thorough yet efficient, covering everything from the basic plan for the morning and communication frequencies, to emergency procedures and contingencies for aircraft dropping out for any reason. By the end, each of us knew what was supposed to happen and what to do if our mission didn’t go according to plan.

The flying itself was uniformly good, despite challenging conditions—it was just bumpy enough to keep everyone busy—and the added variable of the extra aircraft (flown by Klages with me in the back seat, camera in hand) in the formation.

At first, the call signs—Hog, Condor, Schoolmom, for example—seemed a bit silly, but then you realize they serve an important purpose. These call signs function in the same manner as referring to each ship as a number within the formation: for simplicity and clarity. N-numbers are never spoken, or needed.

Chino Airport sees a fair share of neo-military and formation work, so departing as a flight and returning with an overhead break fazed neither the tower controllers nor the other traffic in the pattern. Nevertheless, this group took care to slot into the pattern traffic with a minimum of disruption. After parking, where a formation shutdown was attempted—sorry, those lightweight fixed-pitch props make it hard for the guys with constant-speed props to have all the engines clatter to a stop at the same instant—the pilots extracted themselves, shared notes and committed a serious debrief. The mood was definitely lighter than during the preflight brief. And, most important, every one of them was smiling broadly.