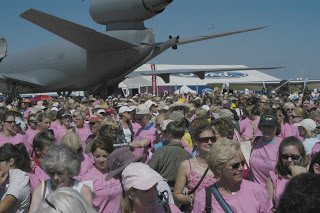 Ten-thirty a.m. August 1, in AeroShell Square at EAA’s AirVenture 2008—anyone there found their way blocked by a sea of pink-shirted women that covered the concrete from the KC 135 Tanker to the Ford TriMotor to the DC-3s. An estimated 1,000 women pilots turned up to be seen and photographed in an effort to set a record as being the largest gathering of women pilots in one place at one time, ever.

“This idea, spawned by EAA consultant Patricia Luebke, has taken off,” said Elissa Lines, V.P. of Development for EAA. “We hope that the sheer number of us gathered here today on AeroShell Square will inspire other women and girls to take a chance on aviation, or even just to try out flying for fun, or more.”

[sc:ad180 ] So, who was there? Patty Wagstaff, Julie Clark, Debbie Rihn-Harvey, Jill Long, Jackie Warda – all air show greats, stood shoulder to shoulder with Women Airforce Service Pilots who ferried WWII aircraft and trained cadets in the 1940s, as well as engineers such as Anna Mracek Dietrich (Terrafugia) and educators, including Dr. Peggy Chabrian, President of Women in Aviation, International. Mary Grady, from AvWeb, and this reporter, despite her feelings about pink, made the trek to the square, too.

Where did they come from? All over the U.S., and abroad, too. Michelle Bassenesi, a flight instructor, flew in from Rome, Italy, where she teaches, just to be counted. Another flew her 1996 Pulsar (which she built and has flown for 1,000 hours) from Oregon, to be at this show. Two more teamed up and arrived for the first time on their own in a Cessna 172. Denise Waters, an A&P; mechanic and constant presence in the EAA KidVenture tent during the show, came to honor the spirit that drove her to build a Wheeler Express with her father.

And what did they prove? That women who fly (and several who build) do come to EAA AirVenture, and in numbers that can influence the next generation of general aviation pilots, who might just be women, too.

Larry Anglisano - July 24, 2021
0
Calibration and hardware installation errors are common sources of trouble, so follow the install manuals to the letter.