If our glimpses into the history of homebuilding over the last quarter century have illustrated anything, its that change is the constant. Certainly there have been innovative advances in design and technology in amateur-built aviation, and the FAA has sometimes found itself playing catch up in light of these developments. Homebuilders have enjoyed tremendous freedom to build and fly, and to avail themselves of cutting-edge products not yet certified. But with this freedom came the opportunity to flout the rules, and the few who abused the privilege could not go unaddressed indefinitely. 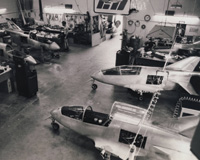 This BD-5 builder-assistance facility looks like a factory production line. Where are the homebuilders?

One area that has seen significant growth over the last two decades is getting help with building. It was inevitable that as homebuilt aircraft became more sophisticated and complex, some builders would seek authoritative assistance in construction of their aircraft, whether through the kit manufacturer or via a third party. Early on, especially in composite designs such as the first Glasairs and Lancairs, kit manufacturers had their hands full just delivering kits let alone trying to make them easier to build. Yet, as more of these designs were completed, builders let the manufacturers know what areas of construction were the most vexing and/or time consuming (such as closing a wing), and this led to changes in the composition of the kit (think quickbuild options) and the growth of builder assistance. Recognizing the need and seeing the potential to boost sales (and to get more airplanes flying sooner), some manufacturers began offering in-house programs to facilitate construction-with the vast majority of them adhering fastidiously to the spirit and intent of the FAAs guidance on major portion requirements. Independent builder shops also sprang up, thriving in part on referrals from manufacturers who lacked their own programs or were overbooked. A number of these shops went on to become full service, in some cases servicing kit buyers who had no intention of lending a hand in the construction. When such abuses came to the FAAs attention, the move was on to revise the guidance on commercial assistance, and to hold builders, kit manufacturers and even FAA inspectors (or DARs) more accountable in determining who contributed what during the build.

Some Things Remain the Same

The FAAs purpose in issuing Advisory Circulars on commercial assistance is as ever: to ensure that the builder of an Experimental/Amateur-Built aircraft has indeed done the majority of the work. This has been encouraged through various means, including the FAA certifying certain kits as meeting its major-portion requirements and attempts to educate builders about their responsibilities during construction. However, even if a kit is in compliance with the Federal Aviation Regulations (FARs), that doesn’t mean the builder has actually completed the majority of the work, and therein lies the rub. A clue to the changing nature of the FAAs stance on this issue can be found in the Advisory Circulars and the related documentation. This is a bit of a thorny issue. While the FARs govern policy for building an amateur-built aircraft, the ACs give kit manufacturers and builders guidance on how to comply. So the ACs effectively become the rules to adhere to. Advisory Circular No. 20-139 (Commercial Assistance During Construction of Amateur-Built Aircraft) spells out what kind of commercial help can be used during construction, and FAA Form 8000-38 (Fabrication/Assembly Operation Checklist) provides an itemized list for builders to use so that they stay within the major portion guidelines. These two documents are at the heart of the changes being proposed by the FAA regarding builder assistance.

Form 8000-38 consists of just over four pages, divided into sections that cover the fuselage, wings, flight controls, empennage, canard, landing gear, propulsion, main rotor/tail rotor drive (for rotorcraft) and cockpit interior. Two columns for each category of tasks allows for checking off who accomplished the task, the kit manufacturer or the builder.

At present, the FAAs proposed revision of the AC guidance includes provision of a longer and more detailed checklist, an altered definition of fabrication, the call for more detailed questioning by the DAR/inspector during the inspection for the amateur-built certificate, stricter record-keeping requirements, and a new definition of commercial assistance and how it counts toward or against the major portion of the construction. The proposed revised checklist contains similar tasks under similar categories as the previous version, but there are four columns under the accomplished by section that include manufacturer kit/part/component, commercial assistance, amateur builder as assembly and amateur builder as fabrication. This further distinction between fabrication and assembly is new; previously it was assumed that the majority of the items would be fabricated by the builder. Under the proposed changes, not only are builders obligated to prove that they have built the major portion of the aircraft with extensive documentation and record-keeping, but the inspector must also document what went into his decision making.

Where We Stand Now

After an extended comment period, the Amateur-Built Aircraft Aviation Rulemaking Committee (a group of kit manufacturers and industry stalwarts) is expected to reconvene early in 2009 to consider its recommendations on the FAAs proposed changes. The major findings of the current ARC report on builder assistance are that the advisory language is inadequate, the forms need updating, and the kit evaluation process is not sufficiently standardized. Also at issue is how to define major portion when evaluating a kit, both at the manufacturer level and when the aircraft is fully assembled. Whether these issues can be resolved satisfactorily is anyones guess, but that the FAA and the ARC are willing to meet again to discuss the changes is promising. The desire to get assistance with amateur aircraft building isn’t likely to abate anytime soon, nor will the FAAs desire to rein in overzealous manufacturers and builder-assistance providers. Some sort of compromise that recognizes and addresses the realities of todays amateur-building practices may be the best way to keep the homebuilt aviation community growing, which is something we all want.

May 1988 A letter to the Editor seems particularly germane to our discussion of the evolving nature of kits. Ed Everett writes: We all admire the likes of the Glasair, the Lancair and the Wheeler Express… but sometimes I cant help thinking that in an effort to capitalize on the lack of performance-type aircraft from Wichita that many of the new companies are not offering homebuilt aircraft. They are offering unassembled production planes for those who want to build a plane. I guess each has a right to his desire, but for some reason I resent people calling a $30,000 kit, mass-produced from production molds, an Experimental aircraft. How many identical kits must be supplied before the experiment has proved itself?… Please continue to support those of us who substitute ingenuity for cash.

June 1988 In a long feature article, Dick Starks details the first flights of the Dawn Patrols Nieuports-completed at 37 mph-with the 1986 Oshkosh fly-in as the ultimate destination. At this point Starks is still a middle school math teacher; the Nieuports had just been certified and the 40-hour fly-off completed. The planes are outfitted with wood machine guns, and the pilots use CB radios for inter-plane communication. Breaker, Breaker… You copy?

July 1988 Denney Aerocraft Co. of Nampa, Idaho, occupies the full-page space on the inside front cover with an advertisement for the Kitfox kit. The copy compares the Kitfox to the J-3 Cub and says that, Performance figures for solo flight will blow your sox off! The Kitfox prototype flew at Sun n Fun 88 on Full Lotus floats.

Around the Patch covers, among other topics, the introduction of the Pulsar kit at the 14th annual Sun n Fun fly-in in 1988. The creation of Mark Brown, the Pulsar had been trailered to the show with only 5 hours flying time on it. It was said to cruise at 130 mph on a 65-horsepower Rotax 532LC engine. Also new at Sun n Fun was Randy Schlitters RANS S-10, which he flew 1500 miles from Hays, Kansas, and the Cirrus VK-30, which made its public flight debut, traveling from Baraboo, Wisconsin, at 200+ mph.

Jeanette Rand, who took up running Rand-Robinson Engineering after her husband, Ken, was killed in a plane crash in 1979, is profiled. The company’s latest product, the KR-100 kit, featured many pre-fab parts and was powered by an O-200 engine. A flight review of Sparky Sparks KR-2, by Dave Martin, is also featured in this issue.

Jim Loyd, who survived a crash in his own homebuilt, discusses ways to make a cockpit safer and more comfortable. Among his recommendations are modifying toggle switches and rocker switches to be more readily identifiable, and installation of cockpit-mounted rudder stops and cable returns.

Dave Prizio - July 27, 2012
1
Could a plane as large, expensive and complicated as the Lancair Evolution be completed by an experienced homebuilder? We have the answer to that intriguing question.