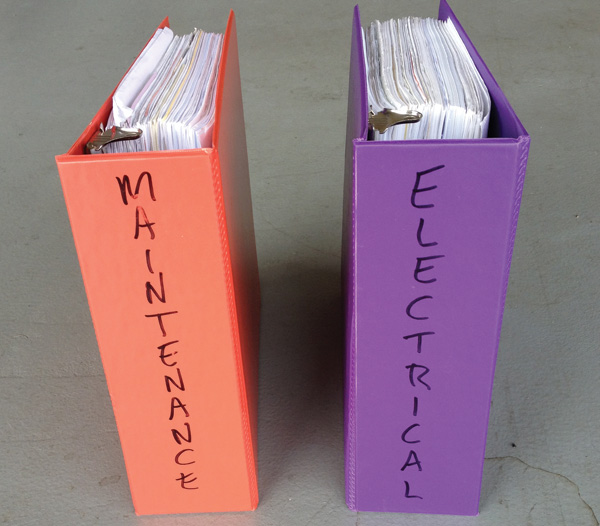 The reader’s frustration is understandable since Title 14, Aeronautics and Space, Code of Federal Regulations (14 CFR), and its predecessors, were originally written with Type Certificated (TC) aircraft uppermost in the minds of the writers. All of the specifics and nuances of regulating E/A-B aircraft were added as afterthoughts. The result is a patchwork of orders and regulations regarding E/A-B aircraft and a variety of interpretations that cannot be definitively resolved to everyone’s satisfaction. But we can search through the information that is available to see if any agreement and understanding can be gained regarding the FAA’s intended use or requirement of “maintenance records” and “aircraft logbooks” for our E/A-B aircraft.

We’ll start by searching the text of 14 CFR for “aircraft logbook,” and we find the phrase, “…engine…notation…must be inserted in the aircraft logbook, or alternate equivalent document…,” in a section dealing with TC aircraft. Next we’ll search the text in 14 CFR for “maintenance records” and find that the term is frequently used. For example: “…shall ensure…appropriate entries in the aircraft maintenance records…” is also found in a section dealing with TC aircraft. These words show that the FAA intends that a logbook, or equivalent document, and aircraft maintenance records must exist in some format for each TC aircraft. 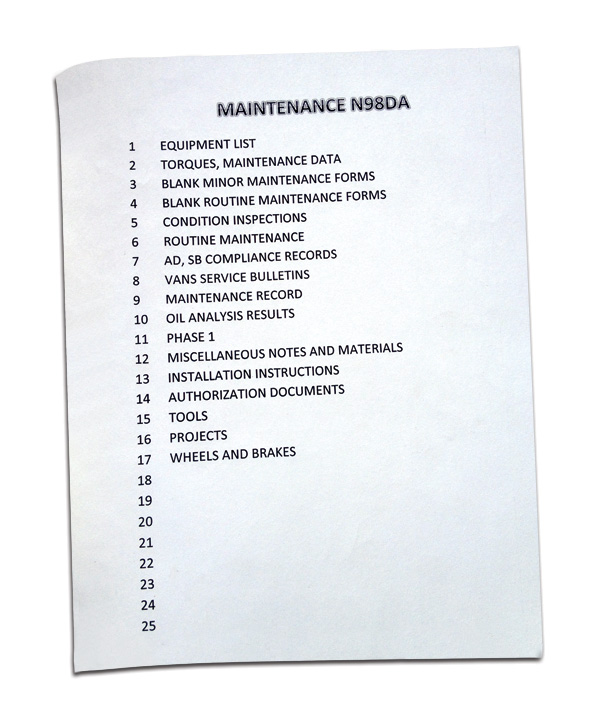 Table of contents from a loose-leaf binder for maintenance records. Note the extra lines for adding additional categories.

But since neither “aircraft logbook” or “maintenance records” are defined in 14 CFR, Part 1, Definitions and Abbreviations, we will attempt for ourselves to achieve some degree of agreement or understanding regarding the definitions or meaning of those two terms as they would pertain to any TC or E/A-B aircraft. Our proposed definitions are:

Aircraft Logbook: A collected location of paper (bound or unbound), digital, or other format, where information regarding a specific individual aircraft is placed in order to provide for subsequent access.

Aircraft Maintenance Records: Information regarding the inspection, maintenance, modification, damage, or repair of a specific individual aircraft that is placed into an aircraft logbook or some other location for subsequent access.

Having a logbook that goes along with the engine is a good idea—especially if you purchase (or sell) a used engine.

The first finding relevant to answering the maintenance records question for an E/A-B aircraft whose Operating Limitations were written in accordance with FAA Order 8130.2G is found in this wording from Paragraph 4104. b.: “This aircraft must be operated in accordance with applicable air traffic and general operating rules of 14 CFR part 91.” This statement puts us right back into searching through 14 CFR Part 91 to determine which applicable general operating rules may require having maintenance records and aircraft logbooks for E/A-B aircraft.

Section 91.417 Maintenance Records is a logical place to start looking, and we soon find a requirement in 91.417 (a) (1) (iii) that maintenance records must include: “The signature and certificate number of the person approving the aircraft for return to service.” But persons working on E/A-B aircraft are not required to have a certificate, nor any training for a certificate, nor any specific knowledge of, or training on, all of the provisions of 91.417. So Section 91.417, in the context of requiring E/A-B aircraft to have maintenance records, is not an applicable general operating rule. 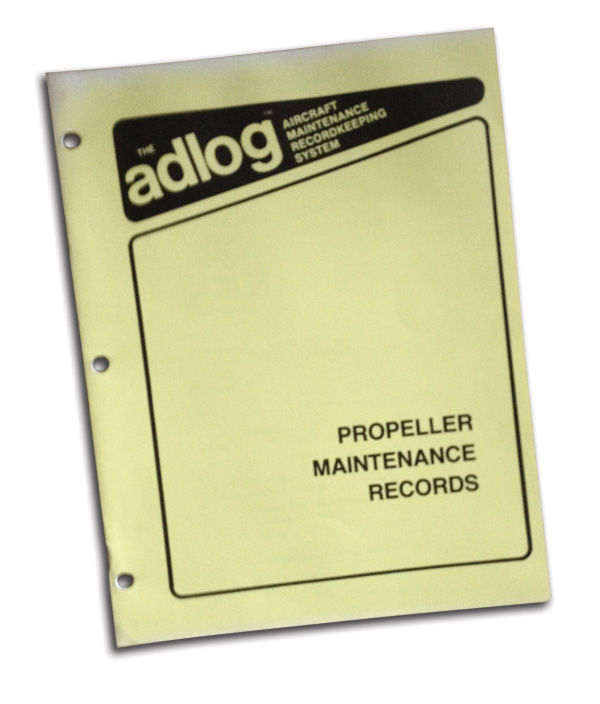 The adlog system consists of a 3-ring binder with color-coded tabs to organize all maintenance records. This propeller logbook fits into the binder.

While we are in the vicinity of Section 91.417, let’s look at Section 91.419, Transfer of maintenance records, wherein only paragraphs 91.417 (a) (2) and 91.417 (a) (1) are referenced. But since the records described in those two paragraphs are not required by 91.417 to be maintained for E/A-B aircraft, then those records would also not be required to be available for transfer at the time of sale of an E/A-B aircraft.

Next from 8130.2G, we will extract paragraph 4104. b. (8): “After completion of phase I flight testing, unless appropriately equipped for night and/or instrument flight in accordance with 14 CFR 91.205, this aircraft is to be operated under VFR, day only.” This is a very significant paragraph deserving of its own article, but we’ll note it just in passing now because we want to get to the next paragraph, 4104. b. (9):

“Aircraft instruments and equipment installed and used under 14 CFR 91.205 must be inspected and maintained in accordance with the requirements of 14 CFR part 91. Any maintenance or inspection of this equipment must be recorded in the aircraft logbook and maintenance records.” 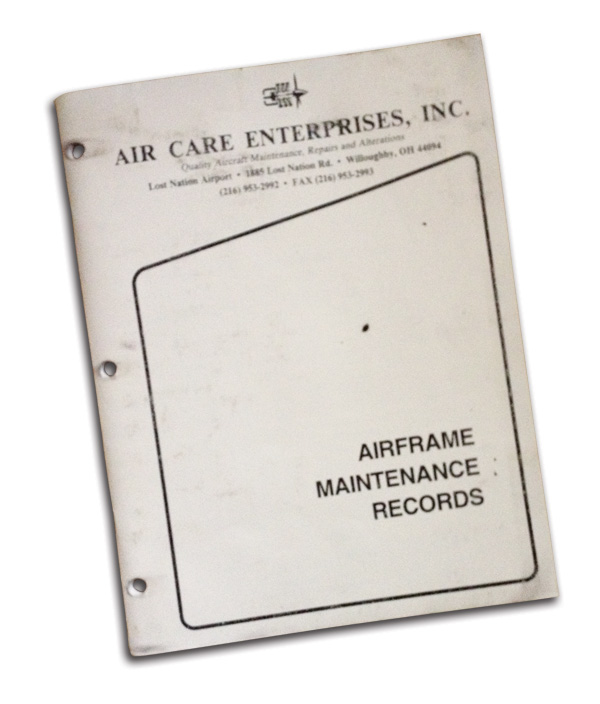 A bound airframe logbook removes any doubt about the order of maintenance, or that it has been performed.

The next three FAA Order 8130.2G paragraph partial extractions that we’ll look at are:

4104. b. (19): “After incorporating a major change…the aircraft owner must make a detailed aircraft logbook and maintenance records entry describing the change before the test flight.”

4104. b. (22): “No person may operate this aircraft unless within the preceding 12 calendar months it has had a condition inspection performed in accordance with the scope and detail of 14 CFR part 43, appendix D…This inspection will be recorded in the aircraft logbook and maintenance records.”

4104. b. (23): “Condition inspections must be recorded in the aircraft logbook and maintenance records…”

There’s not much doubt for those E/A-B aircraft whose Operating Limitations include the above three paragraphs that both an aircraft logbook and maintenance records are expected to exist for that entire E/A-B aircraft and not just for the items found in 91.205.

Since Appendix D of 14 CFR Part 43—Maintenance, Preventive Maintenance, Rebuilding, and Alteration has been referenced in paragraph 4104. b. (22) of FAA Order 8130.2G, let’s look at Part 43 to find 43.1 (b) applicability: “This part does not apply to—(1) Any aircraft for which the FAA has issued an experimental certificate, unless the FAA has previously issued a different kind of airworthiness certificate for that aircraft.” 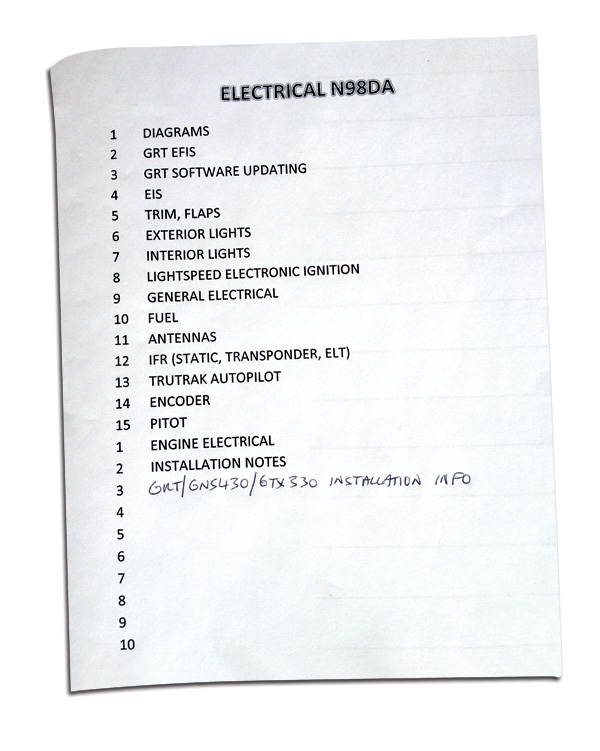 Many builders tinker constantly with their aircraft’s avionics and electrical systems. This table of contents page is easily updated with additional categories.

Are there some other applicable general operating rules of CFR 14 Part 91 that may also describe or require entries in aircraft logbooks and maintenance records for E/A-B aircraft? Probably, so let’s resume our search of CFR 14 Part 91 to see what else may turn up.

There are some sections of Part 91 that are worded beginning in the fashion of “No person may use…” or “No person may operate…” an aircraft unless some specific criteria regarding the aircraft or its equipment is met, and that criteria may involve having maintenance records. Therefore these sections demand regulatory compliance by a person maintaining or operating E/A-B aircraft as well as TC aircraft. The following is not presented as a comprehensive list of such sections, but instead provides some partial extracts with comments and relevant references to other 14 CFR Part 91 sections:

91.207 Emergency locator transmitters. (c) (2): “The new expiration date for replacing (or recharging) the battery must be legibly marked on the outside of the transmitter and entered in the aircraft maintenance record.”

91.411 Altimeter system and altitude reporting equipment tests and inspections: This section refers to Appendices E and F of Part 43. From Appendix E (d) Records: “To comply with the provisions of 43.9 of this chapter…shall enter that data in the airplane log or other permanent record.”

91.413 ATC transponder tests and inspections: This section refers to Appendix F of Part 43. From Appendix F (k) Records: “To comply with the provisions of 43.9 of this chapter as to content, form, and disposition of records.”

It is apparent that it would not be possible for a builder, pilot, operator, owner, or maintainer of most E/A-B aircraft to function legally without having records to keep track of the items that some 14 CFR Part 91 regulations require be recorded, not only for his or her own use, but for substantiation of the fact that he or she is legally in compliance with those specific regulations should some authority request such proof.