There’s an old joke that says that Lycoming once made two identical engines – but nobody can prove that it did! The genesis for this humor is undoubtedly the special publication we reviewed in today’s engine class titled Lycoming Certificated Aircraft Engines, otherwise known as SSP-110-1. This 51 page document lists all 750 (ish) certified models of engines that Lycoming can produce. This sounds like an extraordinarily large product line, until one realizes that the differences between two “models” might be very subtle. 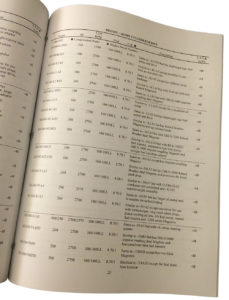 For instance, the difference between two models might only be that one has Slick magneto, while the other has Bendix mags. Such subtleties are important when certification is involved – less so when putting together engines for homebuilt use. However – and this is a big caveat – we can’t ignore such minor variations entirely, especially when looking at the more complex configurations, such as counterweighted engines used with constant speed props.

You see, Lycoming develops specific engine models in conjunction with airframe and propeller suppliers to make sure that harmonic vibrations are minimized and that each installation will be smooth. All counterweighted engines are not alike, with variations in the number and configuration of the counterweights – depending on what is needed for a given prop and engine mount. Buying a salvage engine with such counterweights means that the builder needs to do their research to determine what prop and airframe it was designed for, and careful consideration has to be given for using off of its design point.

Fortunately, the simpler engines can be looked at more easily – but there are still variations that can cause headaches for a builder who doesn’t do his or her homework. Intakes can be on the front, bottom or back of the sump for instance- and if the engine you choose came off a Cessna instead of a Piper, it might not have the necessary fuel pump pad for your low wing design. How about those dual-mag engines – no, not dual ignition, the ones that use a mag installation that has two mags, but a single drive!

So when you find that perfect deal, make sure that the O-540-H1B5D you have selected will really work – after all, it is the same as the –H1A5, except that it is “…equipped with the D6LN-3200 Dual magneto system and the necessary drive train to support it.”