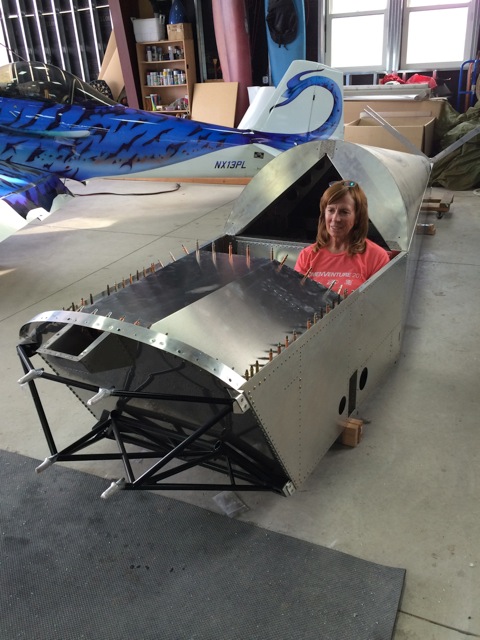 There comes a time in every fuselage build where you just have to get in and see how the cockpit feels! We reached that point on our Xenos Motorglider project yesterday, and my pilot wife Louise tried it out first. The Xenos is basically a Sonex with a longer tail and MUCH longer wings. So the cockpit is comfy for two and a few extra things thrown in back. As far as anyone knows, we’re both too mature to make airplane noises of course, but we did imagine what the view will be like when we get some cushions and the controls installed.

Progress is important in any airplane project – seeing significant change once in awhile is good for the morale, and a major checkpoint has always been “flipping the canoe – a reference to all-metal airplanes built upside down on a jig. The Xenos is built without a jig of course, but the moment is the same – you can now imagine the size of the fuselage, and how much room it will take in the hangar. You can see the spars for the “Y” tail attached to the rear of the fuselage – we’ll probably install the tail surfaces some day soon, and then get it on the gear so that we can more easily roll it around the shop as needed.

There are lots of details to work on for the control systems – then we’ll get started on those long wings. We’re looking forward to building up the Aerovee motor ourselves – and then we’ll have a way to enjoy all those mountain waves we get of the eastern side of the Sierra Nevada. Gotta’ go – it’s my turn to try on the cockpit!