Editor’s Note: Part 1 of this short series appeared in the March 2012 issue.

In the Swift rigid-wing hang glider, an Eck/Geiger HP-10 motor with its associated batteries and controller are neatly streamlined, allowing Manfred Ruhmer, world hang gliding champion, to note that flight characteristics are not noticeably different from those of the pure glider version. The electrified Swift is even aerobatic, recently having performed three large loops over a Swiss ski resort in a demonstration of its prowess.

The Swift features an open structure with a compact power package.

Ruhmer’s interest was aroused by the small motor’s weight of 3.75 kilograms (8.25 pounds) and direct-drive speed of 2000 rpm, which allowed a large, folding blade to be mounted on the stern of the slender fuselage. The motor can achieve a peak 10 kilowatts (13.4 horsepower) for brief periods and 8 kW continually. Initially, the airplane flew with a Czech Jeti Spin 200 model aircraft electronic speed controller (ESC), though Ruhmer has switched to the Eck/Geiger controller. 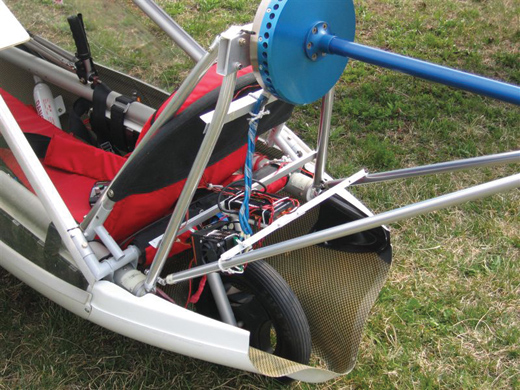 An HP-10 motor, controller and battery packs fit into a tight area, maintaining the Swift’s aerodynamics.

The unit uses battery packs arranged with 16 batteries in series and nine in parallel configuration for a total of 144 cells (A123 Systems LiFePO4), weighing 12.5 kg (27.5 pounds) and providing 58 volts and 20.7 amp hours. In a 2009 email, Ruhmer noted, “The flying characteristics are the same as for the free-flying [footlaunch] version.” He added that aerodynamically, the machine reacts just as the foot-launcher does, and for slow speed and weak thermal soaring, the Swift “is a very good machine.” He can make several takeoffs in one afternoon, soar about the local landscape, and relaunch repeatedly on one battery charge.

Winning a €10,000 ($12,718 at press time) prize in this year’s Berblinger Prize competition, part of the Friedrichshafen Aero Expo, Ruhmer’s electrified Swift was calculated by judges to fly on a diesel fuel equivalent between zero and 0.38 liters per 100 kg (619 mpg). To further save costs, the aircraft can be carried atop an automobile.

The Alpaero Exel was originally equipped with a two-stroke, two-cylinder JPX-320D engine, but recently changed from fiberglass construction to carbon fiber to make allowances for a heavier, but more efficient, Briggs & Stratton four-stroke, V-twin unit. This solution makes it easier to use, well in agreement with the schedule of conditions of this single-seater. Alpaero claims lower vibration, easy maintenance and fuel consumption of only 4 liters per hour to feed its 28 horses.

With a reduction system for the B&S under consideration, Claude Noin, the airplane’s designer, has produced an electric version of the craft, using the Eck/Geiger 13.5 kW HPD 13.5 for launching and climb to soaring altitude.

To assist climb and gliding performance, the Exel can be fitted with a wingtip extension that increases the span to 14.8 meters (48.6 feet), close to standard class.

Exelec, the electric version, was created during the latter part of 2010 and the first months of 2011, and made its first flight in May 2011.

LiFePO4 batteries have a slightly lower energy density than lithium ion, but they are less expensive and do not present a fire hazard. Even with that lower energy, Exelec can take off in 150 meters (492 feet), climb 2 meters per second (397 fpm), and go up to 1000 meters (3200 feet), all at once or in stages, while carrying a pilot up to 190 pounds. 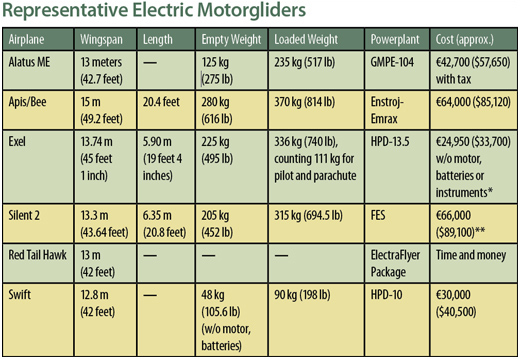 *Add about $6000 for the Eck/Geiger motor and controller, with battery prices varying depending on pack size.
**Based on relative values of kits for other Silent models, deduct approximately 10,000 to 12,000 Euros for a kit if it becomes available.

Beyond the size and weight limits of this category of electric craft, the Apis/Bee is a Slovenian standard class-sized self-launching sailplane, normally sent aloft by a Hirth F-33 two-stroke engine. Dropping the buzz machine for a smoother, quieter electric powerplant, Pipistrel gives us an eager climber (6 meters per second, or 1181 fpm) and an accomplished soarer, with no less than 10 world records to its credit. It’s included here because it represents the next step up into competition level.

Its tail and wing airfoils, and wing planform, are emulated in the G2 Taurus Electro and the Green Flight Challenge-winning G4, a testament to Pipistrel’s design prowess.

According the Michael Coates, the U.S. distributor for Pipistrel, and part of the team that fielded the G4, the Apis/Bee is the culmination of 20 years of development, with several players offering similar-looking machines derived from the first iteration. Coates reports more than 250 modifications since taking over the design as its sole source in 2008. “In Germany, somebody had already copyrighted the word Apis for another aircraft,” he explained. “Apis is Latin for Bee, so the same plane is now sold around the world as either the Pipistrel Apis or the Pipistrel Bee, depending on the market.”

Pipistrel’s current iteration has an electric motor developed by Roman Susnik that puts out 40 kW (53 hp) and weighs a mere 11.7 kg (25.7 pounds). Some 55 kg (121 pounds) of batteries provide motive power while helping the plane maintain a svelte 280-kg (616 pound) empty weight, the heaviest of our survey, but still light for a self-launcher of its size. Apis can accommodate pilots of up to 90 kg (198 pounds).

Mark Beierle has produced a line of Gull aircraft for 25 years, part of the early wave of Part 103 ultralights. While some models can be soared, they are more touring vehicles than sailplanes. Beierle, however, has attempted to fit his products into the FAA legal definitions of ultralights.

Their high cantilever, all-metal wings and pod-and-boom fuselage give the Gulls a unique upright look and a high-visibility cockpit. Beierle has mounted a range of two- and four-stroke engines over the years, including his own Rad-Cam engine on which he spent several years of development. Working with Thomas Senkel, a German physicist, he helped create a 20 kW, 36-coil, 42-magnet, 16-pound disk-like motor. The motor is powered by a 74-volt Rhino model aircraft battery array of 210 cells formed into packs of 20 cells in parallel with each of those parallel arrangements set in series with additional parallel packs. Dale Kramer (of Lazair fame) says this simplifies balancing of cells, with each parallel cell receiving an equal charge. A 500-amp Kelly controller manages the flow of electrons to the motor. 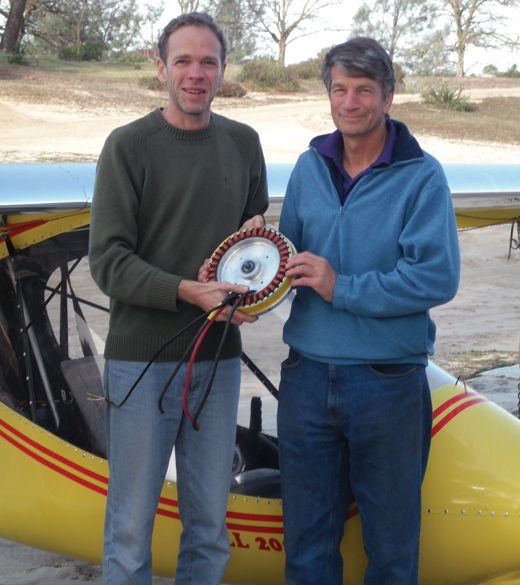 A battery pack that would fit into a 5-gallon fuel can, emulating the ultralight rules, weighs about 40 pounds—not much more than the 30-pound load imposed by 5 gallons of fossil fuel.

Beierle demonstrated the Electric eGull 2000 at the Arlington, Washington, fly-in and at AirVenture in 2011. Videos show an airplane with good takeoff and climb, and Earthstar’s penchant for staying within Part 103 guidelines. The craft merits comparison with Kramer’s electric Lazair, also shown at Oshkosh. 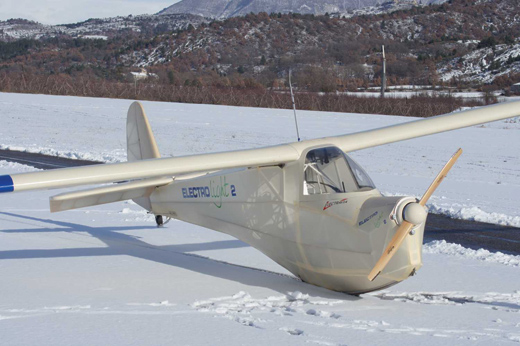 This Fauconnet sailplane features a motor on its newly configured nose. The e-Pod mounting was adapted to the airplane.

Burt Rutan gave Road & Track magazine an interview in the 1970s that included his idea for distributing power around an electric aircraft through the use of multiple small motors, similar to his recent flying car design (or is it a drivable airplane?). These, according to his visionary approach, would even replace control surfaces. Powering up motors differentially would cause the airplane to roll, yaw and pitch as commanded, possibly more efficiently than one on which control surface deflections caused additional drag. This has been attempted over the last few years, in varying guises.

As part of a graduate school engineering exercise, students at Queen Mary University of London showed that enough small motors could provide motive force for a sailplane. Using Graupner model motors, model batteries and wireless speed controllers, they managed to maintain altitude with 16 280mm (11-inch) push-pull propellers flailing away. Derek Piggott, a distinguished test pilot (more than 300 different types flown), sailplane instructor, and movie pilot (chief pilot for Those Magnificent Men in Their Flying Machines and The Blue Max) did the flight honors. At least on early flights, the airplane had to be towed aloft and could not self-launch.

Greg Cole found he could attach slender power pods to the rear of the wings on his Sparrowhawk and use model aircraft motors driving folding propellers for power. The airplane flew in this configuration, but Cole was let down by the quality and reliability of the imported motors. 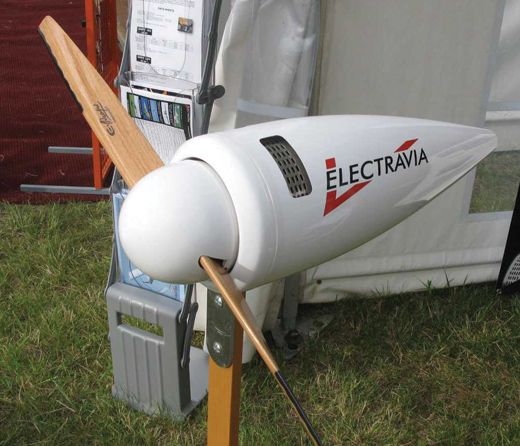 Electravia will shortly introduce a power pod, which the company intends to unveil on a Fauconnet (the French version of the vintage Scheibe L-Spatz sailplane). This single-motor attachment, nearly identical to half the system used on its speed-record-holding Cri-Cri, can power a range of existing sailplanes. The only disadvantage it has is not folding up and reducing drag when electrons are not flowing. It does allow antique and classic sailplanes to join the self-launching club, though.

Light, compact motors are making that vision a reality, and good as these current examples are, they may someday look as antiquated as a Piper Cub or early hang glider relative to what is coming.

Even having slipped into “ultralight” realms only possible with European ULM rules, this survey cannot begin to show all the possible configurations and permutations possible with electric power on board. Aircraft are on the brink of breaking free of constraints that four-cylinder, horizontally opposed and two-stroke engines have imposed on structures and aerodynamics for the last seven decades, and several European and American designers have exciting new designs waiting in the wings, so to speak. The possibilities are truly endless for the intrepid souls who will venture into this new realm.

Larry Larson - November 20, 2015
0
The complete assembled paint booth. The 90-degree dryer vent connects to the board...

Paul Dye - April 18, 2020
1
This was going to get ugly. Crossing southern Louisiana in the middle of the afternoon...