The dreaded letter. Every airplane owner (practically) has gotten one at some point. A problem has been detected with a particular part or piece of your aircraft, and the manufacturer is notifying you via a service bulletin, or the FAA is notifying you via an airworthiness directive, of both the problem and the solution.

The difference between the manufacturer’s notice and the FAA’s notice is that one is optional (don’t do it at your own risk), and the other, bearing the FAA’s seal, is mandatory (don’t do it in the time allotted, and your airplane is legally grounded).

Kitbuilt and plansbuilt Experimental aircraft do not come under the FAA’s Airworthiness Directives. However, the prudent manufacturers do issue the occasional service bulletin when a structural problem with the parts they manufacture or the aircraft they designed comes to light. 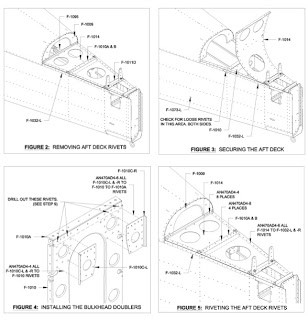 Van’s Aircraft is particularly good about issuing service bulletins, which is good. And they just issued a major one for the RV-10, which is bad. To date Van’s has issued few service bulletins on this generally well-designed machine. The nosewheel construction change (see earlier blog) is an excellent example of an optional fix, which left “unfixed” will eventually bite the flier. That change came about because of builder feedback to the manufacturer. This new service bulletin addresses damage in a tail F-1010 bulkhead, which is integral in the attachment of the forward spar of the horizontal and vertical stabilizers. Cracks have been found in the 500-hour-old factory demonstrator.

The fix? Two doublers for the suspect bulkhead must be installed within five hours of discovering any cracks. The choice? Owners can ignore the issue (not smart), or if upon inspecting their tail bulkheads they see no cracks, they can opt to re-inspect the area every 25 hours until the next scheduled condition inspection (typically done yearly and known as the Experimental’s annual), at which time the factory recommends that the doublers be installed.

Doesn’t sound too bad until you look at the diagrams in the how-to section. Inspecting the area requires disassembling the tail, removal of the tailcone and its electrical contents including any actuators for the elevator trim, and then drilling out key rivets–about nine steps in the bulletin. To perform the insertion of the doublers one must carefully disassemble the area obscuring the suspect bulkhead–18 steps in all. How long will it take? That’s up to the builder, but an educated guess is a couple of days’ work at a normal pace.

Our airplane is being shot with primer, prepping for its first coat of paint as I type. Oh well. Timing is everything. And, no, I don’t wish we were just now building the tail section (the introductory kit in this airplane). I’ll take a couple days of disassembly and repair time over three and a half years of building any day.