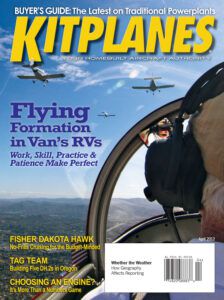 Formation flying was the subject of our April 2012 cover. RV builder Dave Klages took us through the prep and practice for formation work from his home base in Chino, California. (Why does the homebuilt world seem to center somewhere between Chino and Mojave?) Klages wrote, “It’s fair to ask why we do it, but the answer can’t be summed in a single word (though “fun” comes closest). We do it for a variety of reasons. Formation flying is complex and demanding; we train for it rigorously and with greater detail planning than most pilots ever commit. Like any demanding exercise, when it’s done well, formation flying is tremendously rewarding. Bottom line: Formation flying is a lot of work and requires skill, concentration, practice and plenty of patience. I think it makes us all better pilots, more in control of the airplane and proficient with precise, in-flight maneuvering. It makes the difference between a driver and a pilot. “

LeRoy Cook had a report on the Fisher Flying Products lineup, which was at the time under newish ownership. Paul Reidlinger had purchased the company from Gene and Darlene Hanson in 2007. About the aircraft, LeRoy said, “The Fisher designs present one of the most affordable ways to get airborne, with their low prices and variety of building options. One can scratch-build from a set of full-scale plans scanned from the original pencil drawings. (Riedlinger says a set of Dakota Hawk plans weighs 10 pounds.) But partial and complete kits are available for the less hard-core builder. Quickbuild kits are also available, with completed wing spars and ribs (there are a total of 56 main and nose ribs in the biplanes), finished fuselage sides and empennage assemblies. The Dakota Hawk we flew represented an investment of just $26,500…” Cook concluded the overview by saying, “If you’re looking for a docile cross-country machine, the Dakota Hawk will likely fill the bill without bankrupting you.”

Dave Prizio had a guest editorial in this issue where he took a personal look at building with a partner, in this case, his longtime friend Ed Zaleski. “I love having someone to work with when building an airplane, and I enjoy helping other people work on theirs,” he concluded. “Many different people have helped me along the way, especially on my first project. Now I get to pay that back by helping others. In these exchanges, I have had a lot of fun with some great new friends and enjoyed the old ones even more. The personal relationships that have resulted are every bit as rewarding as the actual building process, maybe more so.”

Your current editor in chief had recently handed the stick to Mary Bernard but maintained a column as editor at large. His subject? The weather station at Sandberg, California, a location that always seemed to have the worst weather in the Los Angeles area. After finishing his two-wheeled visit, Cook opined, “I was quite surprised to see how Sandberg looked from the ground. In my mind’s eye, I had the station in a shallow, clear valley with trees surrounding it on hillsides. I should have been looking at a true topo map, not just the satellite view. For all the times I wondered why anyone would build an intermediate weather station in such a valley, I now know precisely why someone would build it on top of Bald Mountain.”

This issue also had Part 1 of our Engine Buyer’s Guide for the year. Back then, we separated “conventional” and “alternative” engines into two issues; these days, they’re combined. We concluded the coverage by saying, “As you can see, the industry-wide slump has caused most engine manufacturers to keep the wallet tightly in hand, spending for development programs only where they make unimpeachable sense. There may well be big spending behind the scenes—and developments like the ULPower are encouraging— but the outlook for traditional engines in 2012 is for a familiar landscape. We’re all looking for a few green shoots.” 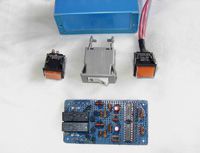 Mel Asberry - May 18, 2011
0
DAR Mel Asberry continues his discussion of aircraft operating limitations by looking at why we do what we do during those important Phase I tests.

Tom Brusehaver - October 20, 2016
3
Building a classic biplane for the next generation of aviators. By Tom Brusehaver.