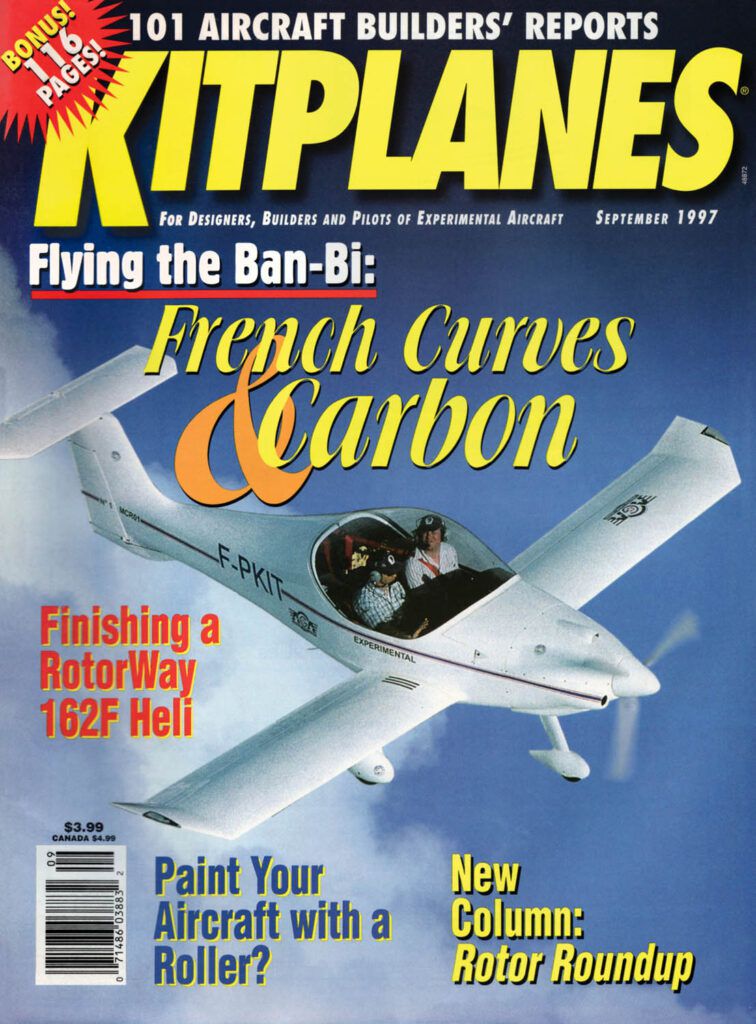 The rakish, T-tail Ban-Bi homebuilt was on our September 1997 cover, teased as “French Curves & Carbon.” Designed by Michel Colomban, father of the tiny, twin-engine Cri Cri, the Rotax 912-powered Ban-Bi was flown at Sun ’n Fun that year, with 6-foot-4 Keith Beverage doing the pilot report. He said that there was plenty of room in the cabin for him and noted a verified cruise speed of 160 mph at 4500 feet and 75% power. That wasn’t all. “We pushed the throttle and saw speeds up to 185 mph,” he said, noting that “cruising at 130 mph, the engine sips just 2 gph of fuel, giving the airplane a no-reserve range of 1430 miles.” At the time, the kit price was just under $30K.

We devoted 24 pages to Completions in this issue, with the number of submissions partially spurred by our giving away a Bendix/King KLX 100 handheld GPS/com. (Remember that?) Highlighted designs included many Avid Flyers (though there were more Kitfoxes listed, no doubt making SkyStar’s management smile), several Lancairs and Glasairs, numerous Kolbs and a whole lot of rotorcraft, led by 11 Mini-500s and four RotorWay Execs.

Elsewhere in this issue, Jeff Dunham was nearly done with his RotorWay Exec project in Part 7 of his build series. “It’s been seven months,” he said, “and our RotorWay 162F kit helicopter is just about finished and ready to fly. Last time we completed almost everything that could be done in the garage, so now we’re about to head to the airport.” Among the challenges was to get the Exec to fit through his garage door, a problem solved by removing the tail rotor boom and collapsing the rear landing-skid struts so the Exec could “wheelie” out the door and onto a trailer for a trip to the airport.

Electronics International had recently introduced its FP-5 fuel flow and pressure instrument. Author Thoral Gilland offered an exhaustive look at the instrument, which had recently been updated to show fuel flow and consumption to tenths of a gallon (its previous resolution was 1 gallon). At the time, fuel totalizers were mainly found in high-end certified aircraft and not commonly in homebuilts. In fact, the test article for this story was actually a Piper Comanche owned by Larry D. Moore. “After my first few shake-down flights, the difference between what is actually burned and what the FP-5L shows as fuel burned is less than 0.2 gallon,” he said. Funny how an instrument we take largely for granted today was still a big deal in 1997.

Another technology we consider part of our everyday fabric today is dynamic prop balancing, but it was not exactly common even by the mid-1990s. Bob Gray discussed the process using a MicroVib system on his VariEze. His baseline test showed the prop/engine combined vibration level to be 1.27 inches per second. Anything above 0.8 ips is considered “dangerous,” so he followed the now-familiar process of adding weight to the prop extension. (This was an O-200-powered Eze, so no Lycoming-style starter ring gear.) Eventually with almost 50 grams (1.7 ounces) added, Gray got the final balance down to 0.052 ips, a very good number.

A small ad in this issue from Van’s Aircraft touted the new RV-8, whose quickbuild kit was still in progress. “Workin’ on it,” the ad said. At the time, the RV-6 was the volume leader; the quickbuild version of the -6 was $19,995. The ad also noted that some 1600 of Van’s designs had been completed. Fast forward to the end of 2022, when more than 11,000 RVs had been completed.

Jon Croke - September 19, 2022
0
Your aircraft’s engine requires monitoring of various temperatures for you to know that it... 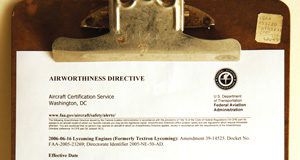 Tom Wilson - December 2, 2022
2
Apparently having done something evil in a former life, I’ve been consigned to toil...