Under my benevolent dictatorship here, three things are not openly discussed in print: poetry, religion and politics. I figure you have better sources for all, and the pages of this magazine are too precious to be squandered off topic. We have heard, loud and clear, that our unflinching focus on all things homebuilding—aircraft reports, how-to features, honest product evaluations and in-depth aircraft-project reports—is what our readers want. 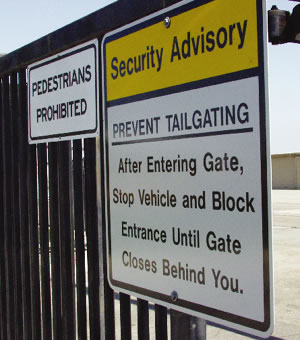 Signs of the time? Just wait…

Permit me to break one of the rules and say this: In the area of airport security, our own government is, in my view, out of control. Under the guise of thwarting terrorism, the Transportation Security Administration (TSA) has been busy separating us from our own airplanes and chipping away—nay, taking a metaphorical chainsaw—to our constitutional rights.

Perhaps, like me, you ignored some of the recent trouble from the TSA because the order was hidden in the Large Aircraft Security Program (LASP). Not many of us own large aircraft—in this case, defined as having a maximum gross weight of 12,500 pounds or more—so in the natural course of filtering news and events, this one got lopped in with overproduction of tomatoes in Paraguay. The LASP generally seeks to implement airline-like security measures to all users of large aircraft, including the requirement for flight crew background checks and other onerous security requirements. Note this is not for commercial operations; it’s for all GA activity for large aircraft.

By itself, the LASP is bad enough, but it comes on the heels of a secret TSA requirement for background checks and badging for personnel with access to the ramp at airports served by commercial service. This so-called badging plan has been postponed until June 1, but poses a serious threat to our freedom to operate at all airports, not just the big ones. In the specious fight against terrorism in every dusty corner of our society, the TSA has, in my opinion, repeatedly trampled on our freedoms. When the rules themselves are secret, and are both created and enforced by the same agency, we have lost every bit of due process. If we are not successful in beating back the TSA, badging requirements will be extended to smaller airports and limits on what (and whom) you and I can carry in our 2000-pound homebuilts will be established. The camel is more than halfway into the tent, and he needs to be shooed out.

Worst of all is the trickle-down to the often small-minded bureaucrats who manage our local airports. Fear of something happening on their airport, on their watch, has prompted rules and procedures that range from the minor annoyance of locked gates and reduced access points to an all-out prohibition against street vehicles in the hangar areas. We need to fight these restrictions at all levels.

If you had a master plan to kill general aviation in this country, I cant think of a better one than to combine obscene and ineffective security rules with a brutally bad economy. If we don’t all stand up, call out the nonsense, support our alphabet groups (AOPA and EAA, in particular), attend local airport meetings and generally have our say, we’re done.

A couple of months ago, when I commented on the loss of Superior Air Parts to bankruptcy, it seemed like the deal with Lycoming was a lock. My fear at the time was that reduced competition would be bad for prices and hard on consumers already reeling from a dreadful economy. The U.S. Department of Justice decided, in early March, to look into the sale of Superior’s assets from an anti-trust standpoint. In addition, the Texas Attorney General began an investigation into the possibility of reduced competition as the result of the sale. The bankruptcy court rejected Lycoming’s bid, as well as a second offer for the assets by Continental Motors. Will someone step up to revive Superior as a standalone company? Wish I had the answer.

Marc Cook has been in aviation journalism for 20 years and in magazine work for more than 25. He is a 4000-hour instrument-rated, multi-engine pilot with experience in nearly 150 types. He’s completed two kit aircraft, an Aero Designs Pulsar XP and a Glastar Sportsman 2+2.