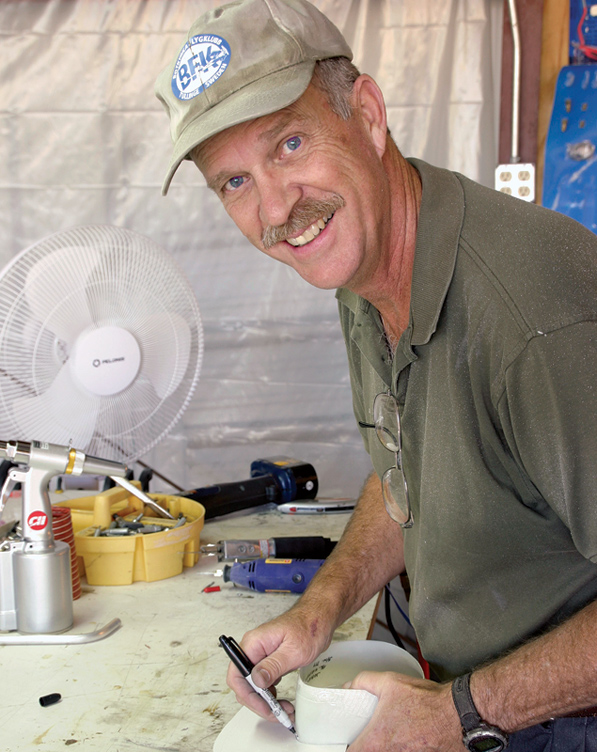 Bob Fritz, in his element.

Near the end of the memorial service for Bob Fritz, a local Swansboro pilot flew Bob’s Jabiru J230 over the group of 200 friends and family. As the surprisingly quiet little Light Sport pulled a gentle turn back toward the east, the pilots, who had naturally clustered together, smiled. And as cliched as this sounds, we all shared the same thought: Bob was up there in the airplane, grinning, saying, "You see what I’m talking about? How fun is this?"

Laughing at the prospect of flying over your own funeral would have been totally in keeping with Bob’s slightly twisted sense of humor. Nobody reported feeling a rush of cold wind on the neck or any other paranormal activity, but as we kept going back for more Swedish meatballs after the service, we couldn’t help but to tell Bob stories, reflecting on the service and concluding that he would approve. Probably correct us on a few of the details, too.

When the first brain tumor was discovered and dissected, doctors gave Bob roughly 12 months with treatment (and just 3 without), though he did receive a prognosis of two years because he was otherwise in good health, a young 61 years old at the time. The doctors got it about right: Bob’s illness consumed him 25 months after diagnosis. Glioblastoma Multifora Stage 4 is notoriously aggressive, even in the healthy and determined. Following the first surgery to remove the golfball-sized mass, Bob underwent whole-head radiation plus chemotherapy, but five months after the initial surgery additional tumors were detected. He suffered through an anterior temporal lobe resection where a 2-inch square section of brain was removed. Bob joked afterward that "they left the good parts."

While still in the hospital, Bob had difficulties with the post-operative treatments, and was even advised to consider hospice care. His wife, Li, wouldn’t hear of it, and as soon as Bob returned home in the summer of 2009, he recovered quickly. In fact, his monthly MRI (magnetic resonance imaging) was clear through April of 2010. A third seizure in mid May-less than a month after I’d spent time with him at the CAFE Foundation Electric Aircraft Symposium, foreshadowed further complications partly forestalled by chemo and cyberknife treatments. But the disease was moving quickly.

It’s important to understand that Bob had many months of good health, and was productive and upbeat during that period. When I saw him at the EAS in Sonoma, he seemed 90% his old self, curious about the electric-aircraft technology and questioning widely held beliefs. His vigor and Li’s determination made me think he stood a chance at outrunning GBM Stage 4.

Bob’s contributions to this magazine are difficult to quantify, because they reach far beyond the number of pages attributed to him. I have heard from many readers who undertook learning how to work with machine tools after Bob’s clear and clever tutorials. Bob had a knack for teaching, which came across in his written work for us. I’d like to think that Bob and I were friends as well as business associates, and so it’ll be both his presence behind the scenes as well as his voice on our pages that I’ll miss. 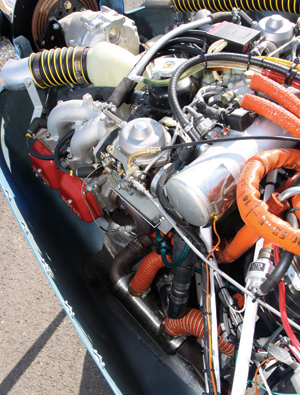 Beneath the hoses and hardware is a four-cylinder engine small enough to power a motorcycle.

This month’s cover story chronicles the development of George Happ’s RANS S-19 to accept the Rotax 914 engine. I enjoyed the brief trip to a brisk but beautiful Salt Lake City in February-sadly, without my downhill skis or the time to use them-but most of all came to appreciate Happ’s careful, methodical approach to doing what no one else had on the front of an S-19. (And he was the first "civilian" builder of the 19 to boot!) As we spoke, it became clear to me that he had considered the installation from many angles, and had used his experience fitting the 914 to his RANS S-7S as a soft template.

And that’s just what it takes to swap engines safely-care, caution and almost unlimited perseverance. Happ carried an advantage into battle because his day job running Matco Manufacturing gives him access to CNC machinery, and his engineering background prevents him from sticking a thumb in the air and saying, "that looks about right." His homemade engine mount has been tested by simulating flight loads while it was hanging from a fork lift. He is conversant enough with design software to appreciate load paths, and to perceive when the math is good and when it isn’t.

He believes the results were worth the effort, and for my part, the 914 impresses. By and large, it operates a lot like the 912. With the constant-speed prop on Happ’s S-19, there is one more control to deal with, but it’s a rotary switch-click to the configuration you want and go back to watching the scenery. Throttle response is great and the turbo seems very stable, or at least the controller is. Manifold pressure faithfully followed throttle movement in every configuration we tried.

I did notice a significant EGT (exhaust-gas temperature) spread between the front and rear cylinders, which share a Y manifold and a carburetor on each side. The fronts ran noticeably rich, almost as though the fuel portion of the air/fuel mixture couldn’t quite make the turn down to the aft cylinders’ intakes as effectively as it slides into the front cylinders’. I recall a very mild form of this characteristic in my old Pulsar, powered by an early Rotax 912. Today we can balance the injectors on a conventional engine with mechanical fuel injection and achieve nearly ideal cylinder-to-cylinder filling, which improves efficiency and power. One of these days, you have to think that Rotax will succumb and fit fuel injection-and a mighty fine engine will become near perfect.

Kitplanes - February 2, 2023
0
Our cover featured a SeaRey amphibian chilling out on the water. Inside, Dave Forster...

Kitplanes - May 21, 2009
0
Sawtooth MythIn his article All About Avionics: EFIS Dreams Stein Bruch complains about the...