For the past few months I’ve conducted a market-study on lithium ion batteries offered as replacements for legacy lead-acid engine starting batteries. Lithium iron-phosphate in cylindrical jelly-roll cells seems to be the front-running favorite combination for chemistry and form factors. This combination has demonstrated the lowest risk with the greatest utility in the manufacturing of engine-cranking batteries. I’ve written several purveyors of lithium batteries requesting engineering data and operational features unique to their products—data that would be mandatory were the supplier seeking to get their product installed on type certified aircraft. 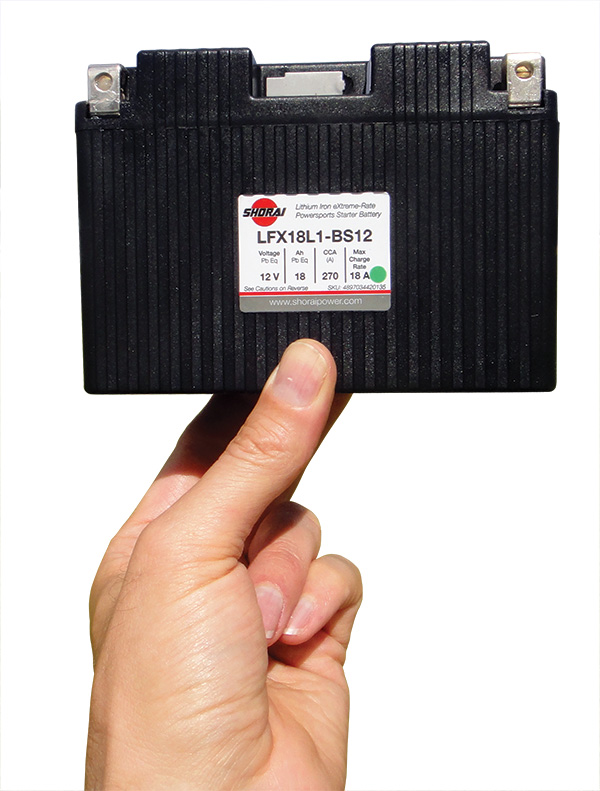 The latest lithium iron batteries, like this one from Shorai, are incredibly light—but the cautious homebuilder should weigh the pros and cons of this weight saving carefully.

Responses ranged from “That data is not available,” or “Sorry, company proprietary,” or “Don’t know about the numbers, but we sell a lot of them and customers are happy with them.” A few suppliers did respond in a cooperative way. However, even the most knowledgeable and cooperative suppliers did not understand the special role that batteries play in many owner-built and maintained aircraft. I’m engaged in an ongoing dialog with the most promising participants and will work with them to refine their marketing approach to owners of Experimental aircraft.

A popular marketing term amongst lithium vendors is “Pb-Eq,” or lead-acid equivalent. I’ve come to understand that this term is intended to claim that Lithium Battery X cranks an engine as well as Lead-Acid Battery Y. Another popular phrase is “drop-in replacement” for a legacy lead-acid device. These terms are not quantified…i.e., they have no side-by-side numbers of overall performance that describe the differences between the two chemistries. In an earlier episode, I described a tiny lead-acid jelly-roll cell from Bolder Technologies being offered about 15 years ago. That product cranked an engine right smartly, but in no way was it a “drop-in replacement” for any example of an airframe systems battery. Some suppliers have offered the notion that lead-acid batteries are less tolerant of deep discharge than the new kids on the block. These assertions are in error.

I was able to peek inside a TSO’d lithium product from True Blue Power. This battery is fabricated from a large array of LiPo jelly-roll cells, along with a boatload of electronics. Further, much of the solid-state circuitry carries or switches the load demands of a turbine engine starter motor—generally 1000+ amps! This is not a trivial achievement in meeting design goals. Given that this battery is qualified to fly on TC aircraft, it might be said to feature the ultimate battery management system.

Know that the Tesla all-electric car uses thousands of the 18650 cylindrical cells in its battery arrays in combination with sophisticated (read complicated) battery management systems.

Compared with lead-acid, the lithium cell is not nearly so robust. Maximizing service life demands that a cell not be charged to more that 90% of its chemical capacity. Further, a cell will last much longer if not discharged to less than 30% of its chemical capacity. The BMS for some models of the Prius are programmed to operate the battery within similar upper and lower boundaries. Products with advanced BMS claim and probably deliver on the longest service life, but battery management intelligence designed for automobiles doesn’t sound particularly attractive for airplanes! Does the BMS contained in EarthX products exert similar control of stored energy? Don’t know yet.

Consider a product fitted with connectors for an external charger/BMS. Most airplanes are put away with the battery fully charged. Assuming that one attaches a BMS to a hangared airplane, exactly how is this already-charged battery expected to benefit from the nurturing of a really smart charger? Yet some vendors of lithium products claim that battery life may double if the battery receives routine maintenance from the external BMS. Doubled you say? Gee, this battery cost me $250! Anything I should do to recoup that investment seems almost a mandatory.

Consider this offering wherein technical details in the advertisement are limited to two lines:

This no-frills device cites no BMS. The line of chargers offered for use with the Antigravity line of batteries use a simple 2-wire interface not unlike those we’ve used on lead-acid batteries for 100+ years. The technical details for this product are most noteworthy for what is not said.

The interesting thing is that all of the batteries cited above are assembled from commercial off-the-shelf lithium iron phosphate jelly-roll cells. Some years ago, I did a study on a wide range of brands in AA-alkaline cells. I discovered that there was little difference in performance, in spite of a wide range of pricing and marketing for the alkaline AA flashlight battery. It’s not clear that differences in popular LiPo cells of the same size are very great either. It follows that broad variation in claims for performance and operating recommendations may be grounded more in lack of knowledge than well-considered application of the physics.

Just because a supplier says, “Yeah, we have a BMS,” doesn’t tell you everything you need to know about how that battery will perform. For example, some versions of the 18650 jelly-roll cell are fitted with a simple self-resetting, over-current protection and claim to have a BMS. Other suppliers of the same cell offer sophisticated electronics on an etched circuit board within the battery. Suppliers on eBay are offering battery management modules that target 4-cell series strings of various sizes.

This begs questions that go to understanding how any product offered may (or may not) be applicable to the electrically dependent OBAM aircraft. These questions go beyond the siren call of weight savings and acceptance of present levels of risk for battery fires. These questions go to electrical performance for energy content. How about potential for battery damage due to aggressive, dumb-charging by the typical 40-60 amp alternator? Will service life be commensurate with breathtaking acquisition costs? Are there BMS-induced behaviors that were never a concern with the lead-acid battery?

Another line of questions go to deducing how many watt-hours are available to run critical systems without placing the battery at risk for damage. If I leave the master switch on and the battery stands fully depleted for a day, two days, a week…at what point do I come back to a trashed battery? If I use ground power to start my airplane and then connect the depleted battery to a normally operating 14.2V bus fed with a 60A alternator, how well does the battery recover…or should it be removed for charging by a specialized charger? Finally, what is the rationale for the wide variation in recommendations across the product lines for operation and maintenance of the battery? The latter question is significant, given that the majority of offerings are fabricated from commercial off-the-shelf lithium-iron phosphate jelly-roll cells.

The True Blue battery cited earlier is as close as you can get to a drop-in performance replacement for its lead-acid counterpart in bizjets. Except for a design goal of lowering weight, the electrical performance has to be equal to or better than SVRLA (sealed, valve-regulated, lead-acid) batteries it replaces. The electronics wrapped around that task are astounding. I just bought a really nice, low-mileage minivan for half of what that battery costs. I hoped I was going to discover at least one or two products that are truly drop-in replacements for something like an Odyssey PC680 in airplanes. Some purveyors of lithium products do claim that marketplace position. However, data backing such claims are not yet in hand. Based on what I know about the LiPo jelly-roll cells from which the majority of these batteries are made, I am skeptical of claims for “drop-in equivalency.”

EarthX does use a proprietary prismatic (box shaped) battery. For the aviation user, “equivalency” speaks of issues beyond engine cranking and fitting into a battery box. Until data on contained energy, along with limitations for access to that energy, are published, the question of “equivalency” is not fully answered.

As my relationship with the lithium battery industry matures, I’ll bring new discoveries to the pages of KITPLANES®. In the meantime, consider joining us on the AeroElectric-List, a forum for exploration, discussion, and discovery of all things electric. If any KITPLANES® readers are experimenting with lithium in their low-risk, day-VFR airplane with gravity feed fuel and magnetos, please join us on the List and share your observations. If any readers are experimenting with lithium in electrically-dependent airplanes, I implore you join the List and let us all sift through the figures and facts together.

Give Me a Brake

Chuck Deiterich - May 18, 2011
0
When his Zenith CH 701 wouldn't stay put during runup and tended to roll on an incline, builder Chuck Deiterich came up with a do-it-yourself solution.