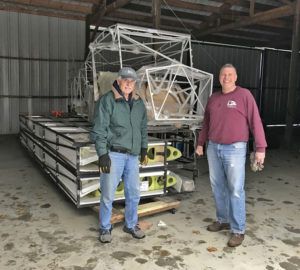 In a press release today, Bearhawk Aircraft announced the deliveries of the first two Bearhawk Companion kits. The new Bearhawk Companion is a side-by-side two-place aircraft. Introduced in August 2019, it is STOL capable, cruises at 130–150 mph, and carries up to 1,150 lb. of payload.

The first to receive the kit was Greg Charest from Boston, Massachusetts, who wanted an aircraft with proven strength and a wide performance envelope. His dilemma was deciding between the Bearhawk 4-Place and Bearhawk Patrol, then the Companion was introduced.

“Weather this year has been back and forth, between cold and warm,” he stated. “A little luck with warm weather helped with an uneventful kit delivery and the Companion is under cover for a couple of weeks while work on the shop is completed.”

A first time aircraft builder, Charest says he has a close friend in Vermont with whom he’s worked on aircraft before. He’s expecting his friend to help with the large assemblies. “Like many other first time builders, I am a little nervous about being able to complete such a big project. Fortunately, there is great support available from Mark Goldberg at AviPro and a very active Bearhawk builder community. Bob and Mark want to see the first build go well,” declared Charest.

From owning and fixing Cessnas, to his current Aeronca Champ, Charest is looking forward to having a plane built with new parts. “I’m super excited about eventually being able to fly and maintain a new airplane, rather than something built in the 1970s,” he exclaimed.

A second Bearhawk Companion customer, Chad Marks of Montana, received his Companion kit also this month. “I’m going through things right now. This is my first time to build an aircraft. It’s all new to me,” he said. Marks has a degree in aviation. While educated in aircraft and systems, he admits all of his background is from college. Marks has been interested in flying for years, but it was always financially impossible. Now Marks says he’s fulfilling a lifelong dream. Following research on available aircraft, Marks concluded with the Bearhawk. Living in Montana, “This type of backcountry aircraft was what I wanted,” he said. “Metal wings, payload, speed, all I read about it fit the criteria. Tubular frame, sturdy, reliable,” he went on.

He is looking forward to flying with and teaching his daughter one day, so a tandem aircraft seemed less suitable than one with side-by-side seating. Marks says he expects the Companion will fly like the Bearhawk Patrol, though with greater payload and without the higher cost of ownership of the Bearhawk 4-Place.

Bearhawk Aircraft says that buyers have been asking for a side-by-side, two-place aircraft with all the features of the Bearhawk designs. The Bearhawk Companion delivers that with its design based on the Patrol’s wings and a fuselage derived from the 4-Place. The result is a rugged utility plane with a large area for cargo, i.e. a “sporty SUV/pickup” version of the Bearhawk.

The Bearhawk Companion is designed to appeal to backcountry and cross-country flyers alike. Side-by-side seating is preferred by some for its two-passenger configuration with both occupants having a broad view through the windshield. The arrangement also allows full access to the instrument panel. This can be advantageous for pilot training and flights into instrument conditions.

The Bearhawk Companion can be powered by the lower cost and readily available Lycoming 4-cylinder engines including the 320/360/370/375 variants and IO-390 providing 150–210 hp. A large cargo area will occupy the cabin behind the seats. The Companion offers 2,200 lb. gross weight, an increase of 200 lb. over the tandem Patrol. The Bearhawk Companion will be capable of carrying 225 lb. of cargo in the baggage area.