The other down under is an untamed wilderness comprising the South and North islands of New Zealand. Together they outsize Great Britain. However, just over 5,000 aircraft are registered in New Zealand, while Great Britain is the fourth-largest aerospace producer in the world and lists about 27,000 aircraft operating in country. Nevertheless, the Bearhawk has come to roost in the southern hemisphere.

The first ever Bearhawk gathering took place in New Zealand the last weekend in April 2021. In attendance were two 4-Place Bearhawk aircraft, a Patrol, and an LSA. “Participants included other wannabes [not to be confused with wallabies] and guys still building,” according to Bearhawk.

Graeme Prankerd, of Stratford, owns PBH, the only Bearhawk Patrol flying in New Zealand. Jonathan Battson of Christchurch and father/son team Murray and Dave Patterson, also of South Island, fly 4-Place Bearhawks NJB and FHR, respectively. Not in the photos were the Bearhawk LSA and its owner Nic Roberts of Hawkes Bay, presently the lone example of this model in New Zealand. Simon Nicholson expects to have his 4-Place completed by Christmas 2021. While the seasons may be different down under, the holiday still falls in the late December timeframe.

All Bearhawk models appeal to backcountry and cross-country flyers alike, and can perform a variety of flying activities. The 4-Place Bearhawk fills a utility and transport role extremely well with its large cabin. The Bearhawk Patrol is a tandem two-place version that excels at accessing remote airstrips. The Bearhawk LSA is a lightweight design that meets U.S. Sport Pilot requirements. The Bearhawk Companion is a side-by-side 2-place model with superior strength and payload capability. Each aircraft excels at stable slow flight and attains higher than expected cruise speeds. Bearhawk Aircraft manufactures high quality quick-build kits for all models. 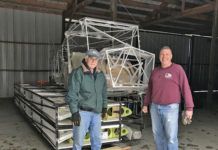