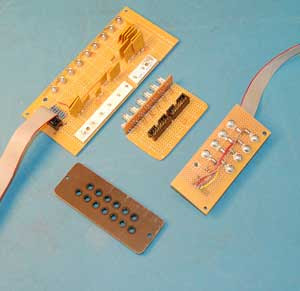 With instrument panels now being populated by flat screens, digital readouts and all manner of 21st century silicon wizardry, it seems odd to rely on 60-year-old technology to protect them from power spikes. Specifically, the mechanical circuit breaker. Have you ever seen one on a computer?

Wondering what was new in the realm of electrical protection, we did some research the modern way, i.e., on the Internet, and came across an article by our own Jim Weir on the subject of polyfuses.

These solid-state circuit breakers are a matrix of plastic and carbon encapsulated in a dime-size wafer. When cool, they pass power through the carbon; when hot, the plastic melts and the carbon filaments are no longer connected. Take away the cause of the excess heat, the filaments reconnect and the circuit is reset.

With that in mind I decided to use this technology on my current project, a Jabiru J250. It turns out to be an exceptionally easy task; if you can figure out the wiring for the panel, you can build this with just a bit of help.

My assistance came in the form of a good friend, Rob, also a pilot, who is rather an expert in electronics.

Rob got a bit fancy, though. Your old mechanical circuit breaker has a satisfaction factor in that when it pops, you can see it. Granted, satisfaction doesn’t extend far if it does so in flight, but you see what I mean.

The polyfuse, however, is worse than a DOS error message for information. You don’t even get Gates speak; it just opens up. Rob decided to rectify (electrical pun intended) that by recognizing that the polyfuse continues to pass a minute amount of power even when tripped. An LED requires little power, so putting one in parallel with each circuit means that when it trips, the light goes on.

Now that the circuit is built, Ill be installing it and reporting on its performance.

Scott Spangler - August 16, 2019
1
Creating a bespoke airplane is one benefit of building from plans; when assembling a kit, builders cannot make many changes.