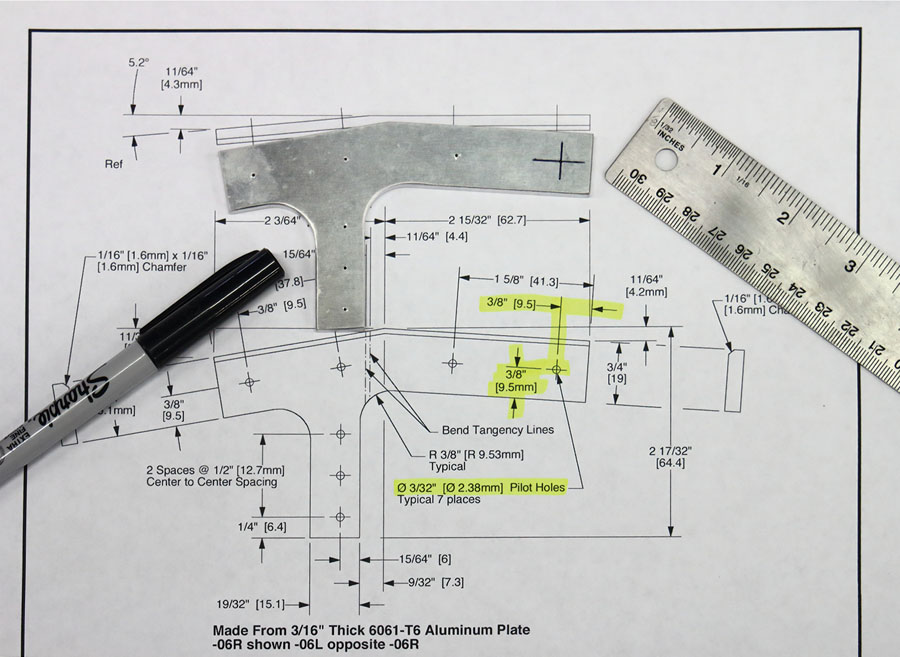 A seemingly complicated part layout can be simplified by narrowing your focus from the part as a whole, to a single hole in the part.

Imagine it’s your first day in freshman algebra class and you’ve been handed a thick textbook. You page through tentatively but keep returning to Page 341, where you swear the typesetter used every letter and symbol on their keyboard in a single formula. You’re convinced you’ve gotten in over your head. Your spirit sinks. What you’re staring at, however, is a problem you’ll grasp in nine months, after you’ve gained additional algebra knowledge and familiarity by working through the textbook page by page. But even on that first day of class, if you narrow your focus on the formula’s bits and pieces, I bet you’ll see portions you already understand, if only n2.

Airplane builders are no different. We page through a kit’s plans or build manual, subconsciously assigning a difficulty level to each page until we freeze on the page that has the most ink. And if the ink doesn’t get us, a pre-conceived belief that we won’t be able to fit the canopy or cowl, or rig the wings, will surely freeze us in our tracks. Even builders who have progressed well into their project, regardless of their success to date, continue to glance ahead, fretting over an upcoming assembly or procedure because, as humans, we enjoy worrying.

Highly experienced builders aren’t immune, either. No matter how many airplanes they’ve built, they still worry about an unfamiliar procedure or struggle to accept a particular designer’s unique way of doing something, such as building a turtle deck by fitting the formers to the skins, rather than fitting the skins to the formers. If it isn’t familiar, it’s feared. And fear can freeze your progress or prevent you from building, or finishing, the airplane you really want.

The way to begin moving forward, or keep moving forward, is to narrow your focus to a smaller, more manageable task. Circling back to the algebra analogy, if you look at an algebraic formula as a collection of individual addition, subtraction, division, and multiplication tasks performed in a particular sequence, the formula itself looks less ominous. Airplane construction can be approached the same way. An airplane is a collection of individual parts, and each part is its own project. The individual parts become individual assemblies (rear spars, aileron bellcranks, flaps), and each assembly can be thought of as a project unto itself. In time, the assemblies become an airplane.

Tail kits are a perfect example of building with narrowed focus and a great way to get started building an airplane. Not only can you test the water without a large financial commitment, you can wade into a project surrounded by fewer parts and a more attainable goal. The tail is a great place to begin, even if you have committed to a full airframe kit, as very quickly you’ll have recognizable airplane parts to show for your effort. That is a great way to boost your confidence, impress your friends, and scare your spouse. “You’re really doing this, aren’t you?”

If your chosen kit was supplied with a builder’s manual, it has a Step 1. It very likely has many Step 1s, one for each substantial task. For instance, the AeroVee Engine Assembly Manual has 45 Step 1s. If your kit was provided with plans, there is a drawing on which you are supposed to begin construction, or a beginning drawing for each major assembly. A plans page for an aileron may show both the details for the parts and how to assemble the parts into an aileron. A manual may have a single step that says, “Make the parts shown on Page A-22.” That can leave you staring at seven or 10 or 20 parts. Narrow your focus to one part. Then another. If a part looks particularly complicated, narrow your focus further—I call it tunnel vision—to an individual dimension, bend, or hole placement. When all of the parts are made, assembling the aileron can be approached as individual tasks, like positioning a hinge, match-drilling a rib, and bolting a counterweight in place. When you narrow your focus to a single Step 1, a single drawing, a single part, you reduce a significant project to a series of single tasks.

As you work through the plans or build manual, and advance your project (and skills) incrementally, you’ll also become familiar with the aircraft designer’s way of communicating. You’ll begin to recognize visual cues at a glance and their meaning will register subconsciously. Your ability to absorb and interpret the plans will take less effort. The pages bathed in ink will become less daunting. Once more to the algebra comparison: When you were new to the formula for volume (Length x Width x Height, or LxWxH), seeing just the letters may have seemed foreign, but now you can apply it without thought, recognize it at a glance, and quote the formula to anyone who asks, “How do you calculate volume?”

Narrowing your focus is a great tool to employ when your project has you feeling overwhelmed, discouraged, or stuck, as it reduces a multi-year project down to how you’ll spend the next 10 minutes. Think of the ink on a page as multiple opportunities to move forward, not a single task to be conquered at once. Don’t fixate on your plan’s equivalent of the last problem in the algebra textbook. Wrapping this up with a different analogy: When faced with a cornfield full of deer, a successful hunter takes aim on a single deer, not the whole herd, and they never take the hardest shot as their first.

Jim Weir - September 19, 2011
0
Break out your laptops, iPhones and iPads. There is a new batch of apps and other software that can help pilots chart their course when traveling cross-country.