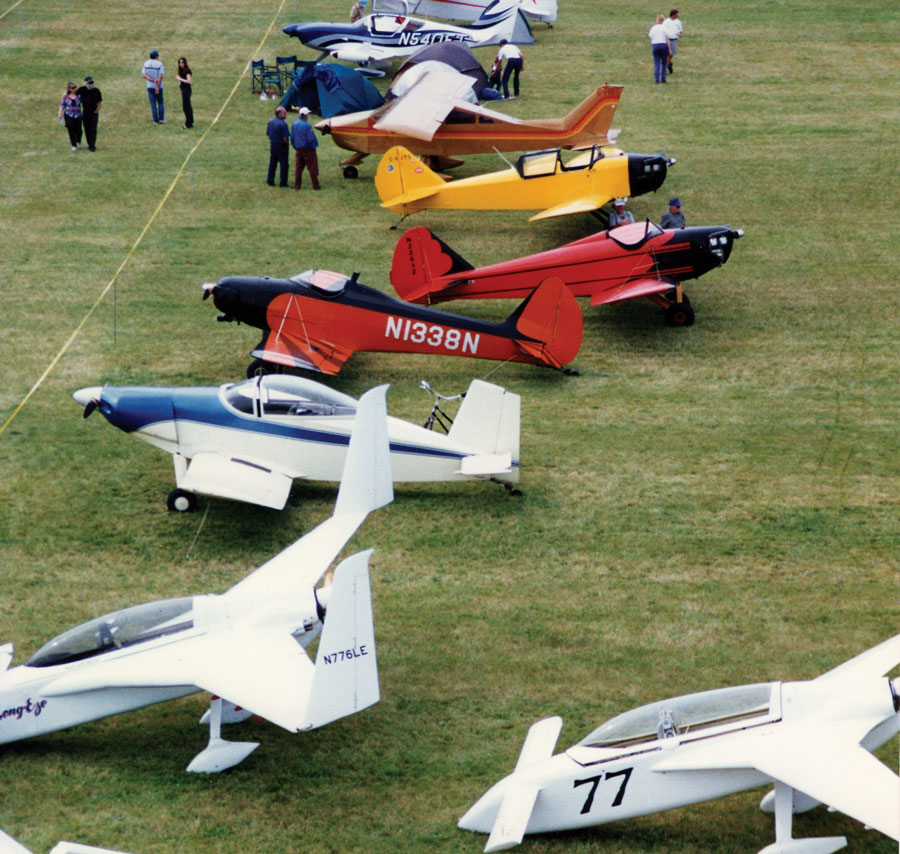 It’s the kind of story sadly related around the coffeepot in the pilot shack. Some acquaintance recently bought a completed homebuilt and quickly crashed his new acquisition.

But how common is that, really? Once the test period is flown off, shouldn’t the plane be just as safe as any other homebuilt? Are new purchasers of flying Experimental/Amateur-Built aircraft in for a period of difficulty?

Let’s look at the safety record of purchased homebuilts.

How common are used homebuilts, anyway? As Figure 1 shows, about 2000 homebuilts change hands each year. That’s about one in every 14 homebuilts. The estimate is based on the number of E/A-B aircraft that show a new owner compared to the previous year. 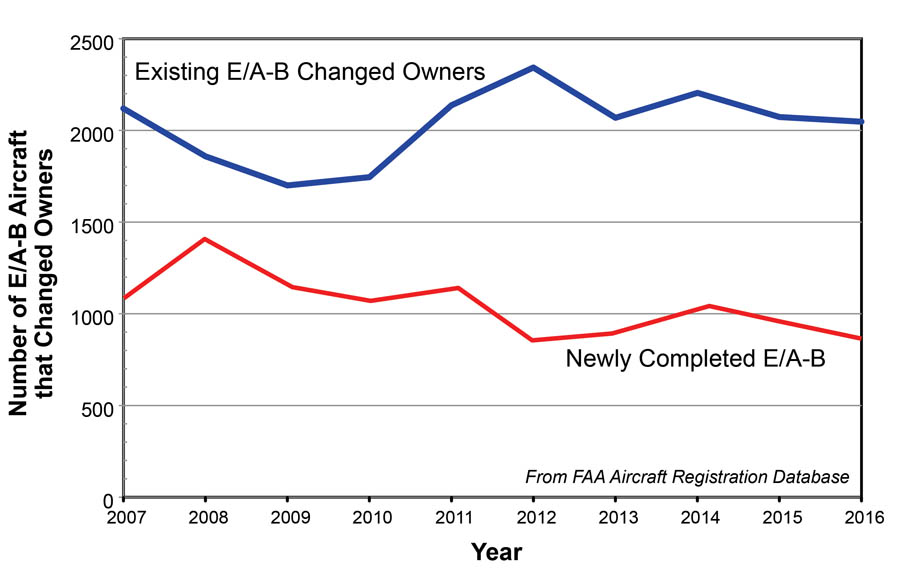 Of course, that doesn’t mean that the entire fleet changes hands every 14 years. Most of us know builders who have kept their planes for decades. And some homebuilts change hands multiple times. When I bought my 14-year-old Fly Baby in 1996, I was its fourth owner.

There’s nothing in the FAA registry that directly notes whether a given E/A-B aircraft is still owned by the builder. However, most homebuilts end up with their builder’s name as the manufacturer. If the registered owner’s name is different from the name listed in the “manufacturer” column, it’s likely a purchased homebuilt. If it’s the same, we can assume the plane is still owned by the builder.

It’s not perfect, but it’s a good start. A rough check shows about 42% of registered homebuilts are still owned by the builder, with about half owned by a buyer. About eight percent are ambiguous; this is usually due to a corporate name being used as either the manufacturer or owner. 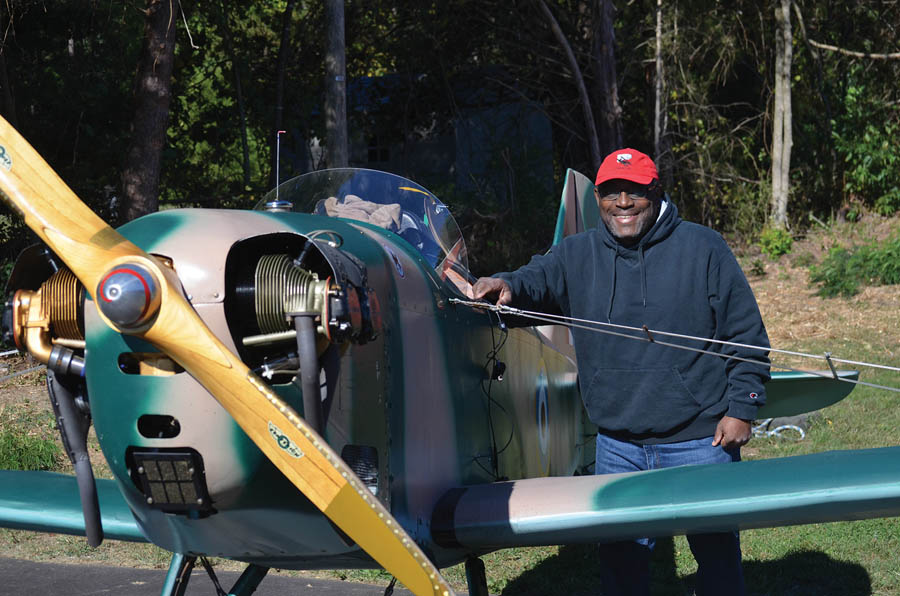 Older homebuilts may have had multiple owners. Bill Hills bought his 1975 Fly Baby in 2017, the eighth in the line of ownership. (Photo: Bill Hills)

Of course, with almost 70 years of E/A-B aircraft, it’s not surprising that a lot of aircraft have been sold. If we look at more recent designs, the percentages change. Out of 1342 RV-8s registered as of January 1, 2018, about 56% were still owned by the original builder, and 32% had changed hands. Using the “model year” information in the FAA database, it appears that RV-8s are retained by the original builder for 12-14 years after completion. 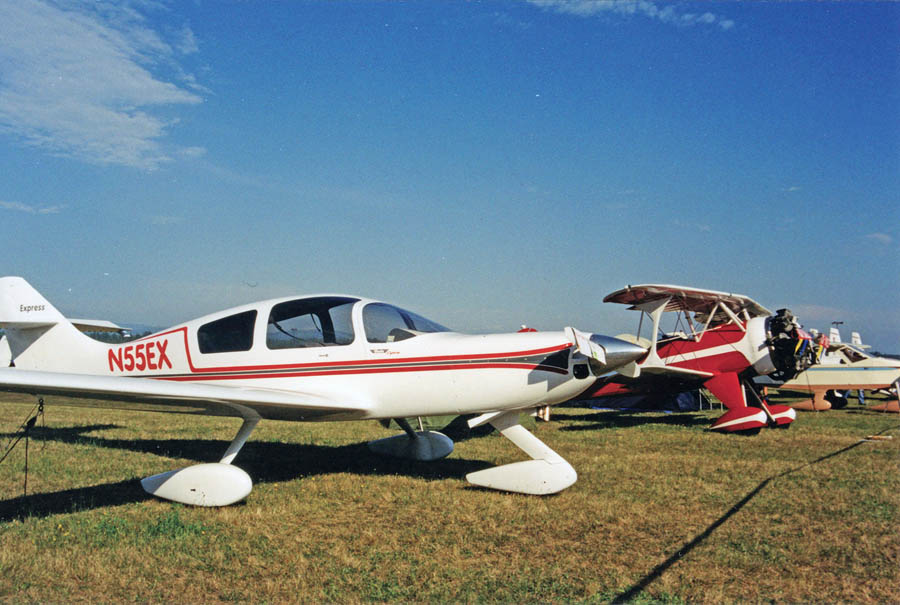 Purchasing a discontinued homebuilt may lead to challenges in getting checked out.

The same process of comparing the manufacturer name with the owner name can also be used to identify builder versus buyer status for aircraft in the NTSB accident database.

There are other clues, too. Often, the NTSB report notes if the plane was built by the pilot or was purchased.

Otherwise, a big clue for a purchased E/A-B aircraft is when the pilot has fewer hours in type than the aircraft total time. We’ll assume that the accident plane is owned by someone other than the builder if they have at least two hours less time in type (a bit of leeway, as most pilots won’t log the ground-test time).

This isn’t perfect (I have more time-in-type than my purchased Fly Baby’s total time) but is probably a pretty good indicator. 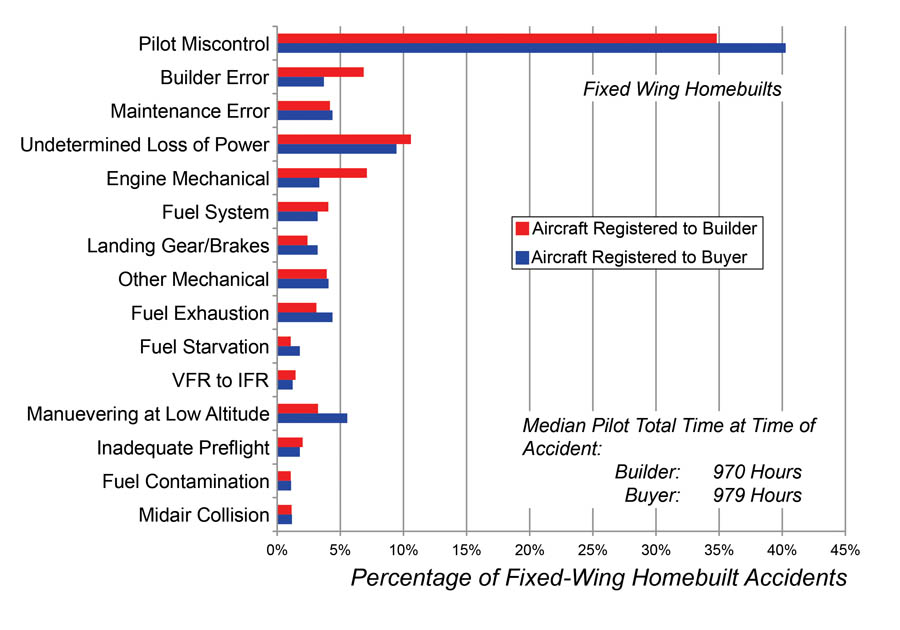 Builder-flown aircraft suffered more accidents for builder error and for engine mechanical issues (including undetermined engine failure). This is perfectly understandable, as the builder-owned period usually includes the first flight and the majority of the test flight period.

But the increased rate of pilot miscontrol accidents among those flown by purchasers is readily apparent. It’s almost six percentage points higher, or about 15% higher, than the builder-flown rate.

The buyer-owned portion has other fascinations. More accidents related to fuel management might indicate new owners aren’t familiar with the fuel systems of their purchases. “Maneuvering at low altitude” is a bit of a surprise, too. Do builders have a bit more caution with the planes they took so long to build? Or are used homebuilts appealing to fighter pilot wannabes?

One curious discovery during the analysis: The total accidents come out almost the same for builder-flown and buyer-flown aircraft. For the 3196 fixed-wing accidents in my 1998-2016 database, 1577 aircraft were owned by the builders and 1619 by subsequent purchasers.

I love it when numbers like this come out so close—it lets one compare the raw number of accidents, rather than percentages. Figure 3 illustrates the results over the 19-year period covered by my database. Red bars show where builder-owned aircraft have more accidents, blue indicates when purchaser-flown are worse. Many of the usual analysis factors were a wash.

Again, pilot miscontrol catches the eye. The purchased homebuilts suffered over 100 more accidents than the builder-owned E/A-Bs in the 19-year period. 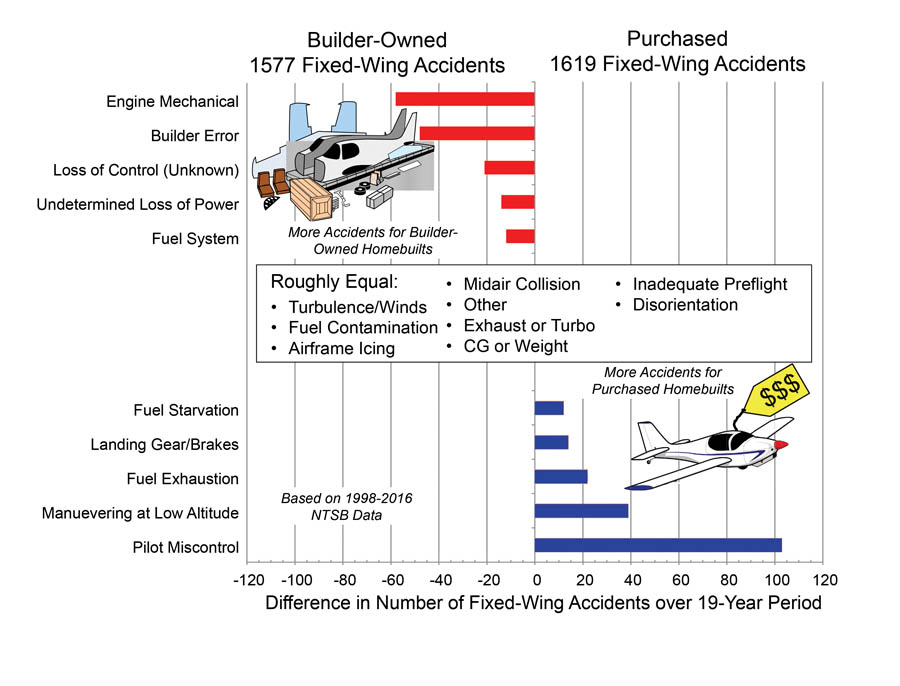 The classic concerns regarding a purchased homebuilt are the issues related to the buyer getting accustomed to their new airplane.

The FAA General Aviation Survey says that the average homebuilt flies about 50 hours per year. Let’s look at the accidents where the pilot had 50 hours or less time in type at the time of the accident. Of the accidents in my 1998-2016 database that met this criteria, there were 483 in aircraft owned by the original builder and 703 by subsequent purchasers.

Sound bad for the buyers? Not really. As related earlier, about 2000 homebuilts change hands in an average year. Only half that many new homebuilts typically get added to the FAA rolls in the same time period. About 1.85% of purchased homebuilts have an accident in the pilot’s first 50 hours versus 2.5% for those E/A-Bs owned by the builders. 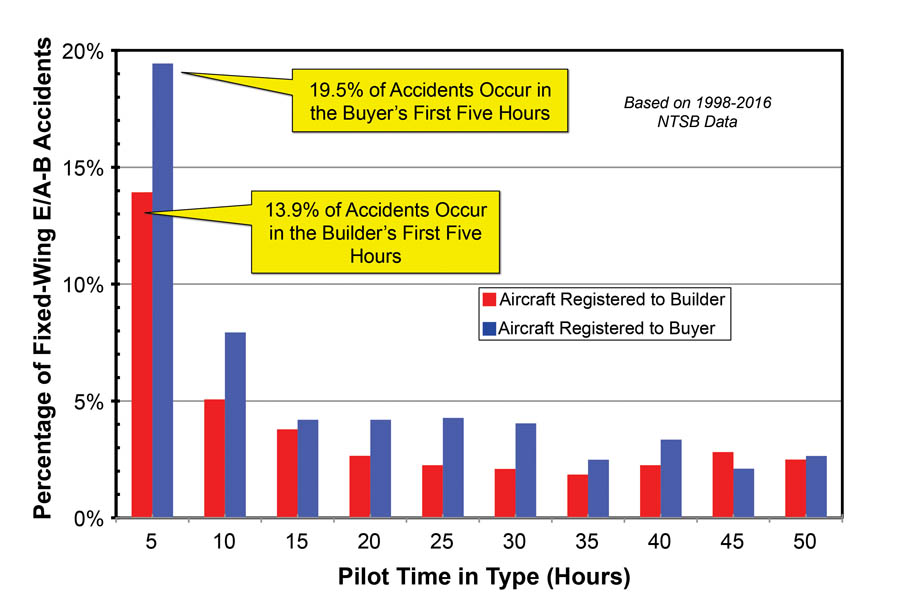 Sounds good for the buyers so far, but let’s break down that time-in-type a little further. Figure 4 shows the percentage of accidents in five-hour increments. About 14% of the E/A-B builder-flown accidents occur in the first five hours versus 19.5% of the purchased-homebuilt accidents.

This is fairly significant, especially when one realizes that the first five hours for builder-owned aircraft includes the very first flight of the aircraft, and the rate is still less. Despite the higher rate of mechanical failures for new homebuilts, builders still see proportionately fewer accidents in their first few hours of flight! 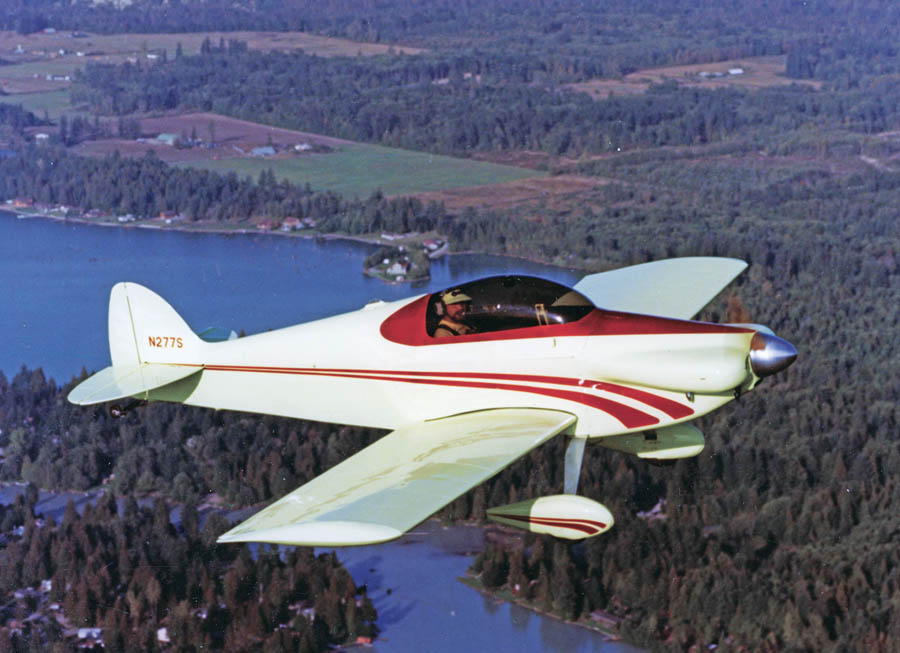 Older homebuilts tend to be taildraggers, but some like this Sonerai were also available in tricycle gear configuration.

Obviously, purchasers are being surprised by the way their new E/A-B aircraft flies. The pilot miscontrol rates seem to confirm this, with 36.6% of builder-flown accidents versus 40.6% of buyer-flown.

Curiously, the higher rate isn’t due to stalls. It’s from loss of directional control issues on takeoff or landing. And when you see that, it’s time to start thinking about conventional-gear aircraft.

In other words, taildraggers.

As Figure 5 shows, the pilot miscontrol rates for tricycle-gear homebuilts are almost identical, whether one is looking at the overall accidents, those in the first 50 hours, or even those in the first five hours in type. But the taildragger rate is higher for purchased homebuilts, and it gets worse with lower pilot time in type. 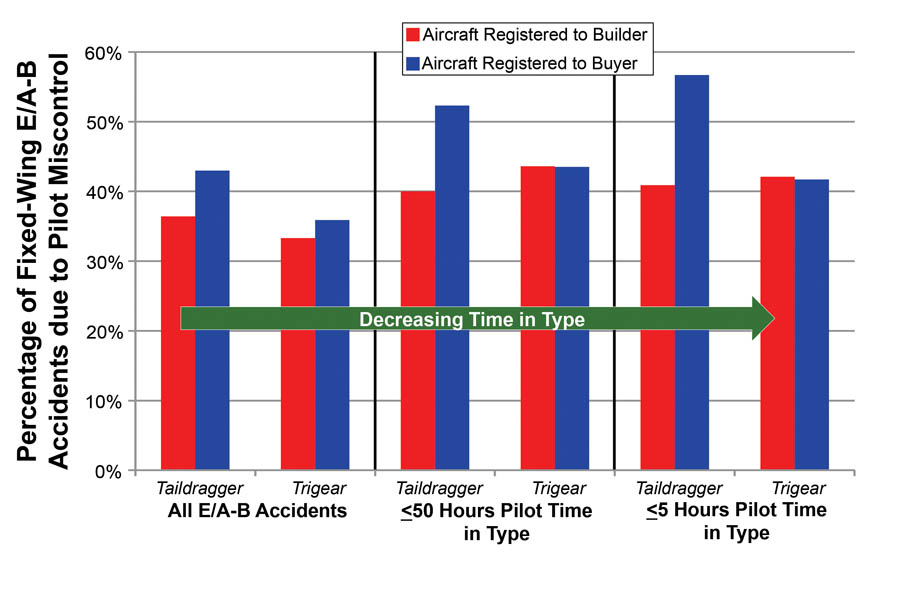 The overall purchased-aircraft tail-dragger accident rate is about seven percentage points higher than for builder-flown conventional-gear aircraft—about 18% more. But when one looks at the rates for pilots with five hours or less time in type, the difference is twice that.

It’s not due to relatively less overall inexperience. The pilots flying purchased homebuilts in the low time-in-type cases actually have a slightly greater median total flight time. It really appears that buyers of used homebuilt taildraggers are not preparing themselves like they should.

It’s getting harder to find taildragger instruction, but that should apply to both builders and buyers. One aspect may be that the buyers are flying older designs. The average year of completion for buyer-flown homebuilts in my accident database is 1989. A lot of those designs will have come from the ’60s and ’70s, when sensitive conventional-gear aircraft were not rare.

Another aspect is the potential that builders are more “networked” than buyers. A builder will take three years or more building their aircraft. That gives them plenty of time to connect with other builders and with owners; they learn about idiosyncrasies, and it may lead to contacts for in-depth checkouts prior to their first flight.

A purchaser, on the other hand, works on a much shorter timeframe. They don’t have the longer-term opportunities to research the aircraft and find checkout support. A few hours in a cuddly taildragger like a Champ won’t prepare them for flying some of the 1960s designs common to the used market.

Homebuilts are not like certified airplanes. They’re designed differently, they’re built differently, and quite often they fly differently. Purchasers’ experiences flying Standard Category aircraft may not prepare them properly. And, obviously, buyers of used E/A-B taildraggers should take even more care.

How does a potential purchaser reduce their risk? The same way builders do: by thorough pre-first-flight research regarding the plane’s expected characteristics, a good checkout (if available), and by utilizing the EAA’s Flight Advisor program.

Buying a completed homebuilt is a great shortcut to a world of interesting aircraft and outstanding performance. But there are pitfalls, and potential buyers need to understand the aircraft and the risks.

Almost all of us learned to fly in aircraft certified to Part 23 or its regulatory predecessors. These federal standards produce aircraft that handle similarly and exhibit positive stability. A checkout flight in a production aircraft is usually more about learning how to operate the buttons, levers, and knobs than learning how moving the controls affects the aircraft.

This homogeneity in behavior may cause problems for a purchaser when opting for an aircraft that does not comply with those standards. An E/A-B airplane may not always react to the controls as the pilot would normally expect and may not possess the stability that a pilot might normally rely upon. Good designers use Part 23 as a target, but in older designs especially, surprises can be waiting.

For most people buying a used homebuilt, the usual concern is whether the mechanical issues have been solved. But while an E/A-B aircraft with 200 hours might be past its teething period, it may harbor handling quirks or instability intrinsic to its design. Without a thorough checkout, this can lead to trouble—and for some older designs, finding a qualified check pilot is extremely difficult.

When I bring up E/A-B handling issues among homebuilders, there’s usually a bit of outrage. “We don’t want our planes to handle like certified aircraft! We want sports cars, not trucks!”

Consider: The Pitts Special is a fully certified Standard Category aircraft. You can build one from scratch if you like, or you can write a check to Aviat Aircraft and pick up your ready-to-fly Special.

I’ve never flown a Pitts Special, but don’t believe I’ve ever seen the term “truck-like” used when describing its handling. So it’s not impossible to comply with Part 23 and still have a sporty-flying aircraft.