Ever since I was a little kid, I loved to go see the airshows, especially the Cleveland National Air Show. You could always count on some nice WW-II iron and usually it was either the Thunderbirds or the Blue Angels that were the grand attraction. And it was an honor to actually be invited to have my first homebuilt airplane, an RV-4, on display at the very same airshow.

I bet there are many of you out there that have had the same experience of having your airplane on display at your hometown airshow. I would venture to say that you have had as much fun as I have explaining to people that you built it and flew it, and maybe you have taken some young kid or an adult that has that spark in the eye for a ride. I know I’ve taken a few hundred Young Eagles for their first ride, as well as many more adults. A number of them have let me know when they soloed or got their license. It’s way cool knowing you brought aviation into someone’s life in an impactful way. 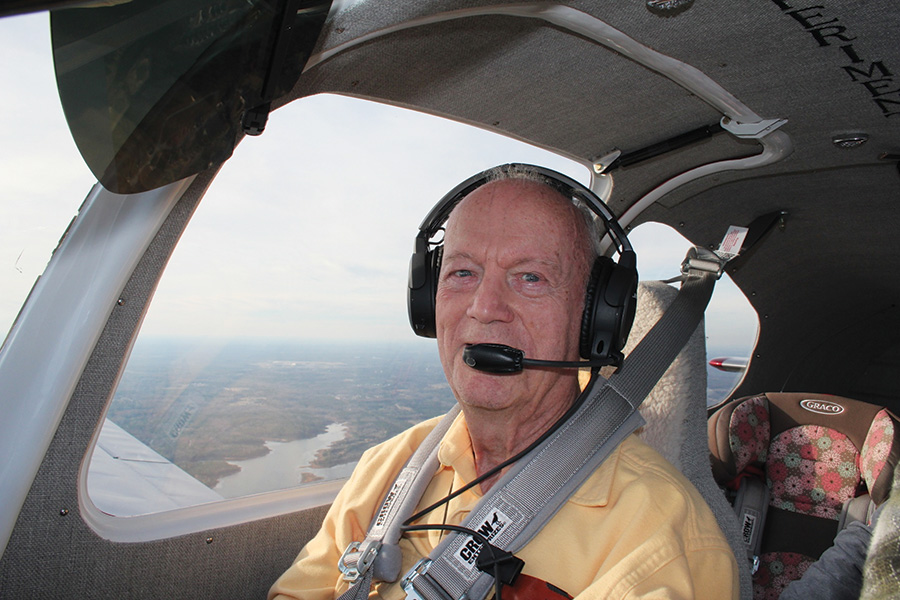 In recent years I have discovered a different side of airshows and fly-ins that I really enjoy. Some of you may know that I also fly a Stearman, and I am very fortunate to fly as part of a formation team whose members have military and airline experience. These guys are the real deal with actual combat experience in Vietnam. We don’t do any fancy aerobatics, but instead perform flybys of the various formations that were used when wartime pilots were being trained.

While I really like the flying part, I enjoy the ground display even more because we usually get a good number (although decreasing) of wartime pilots who come by and want to share their stories of learning to fly the Stearman. Some just want to quietly reminisce, but others love to talk, and I certainly love to listen! One team member pilot’s father-in-law (now deceased) was actually in the Army Air Corp when the Stearmans (PT-17) were accepted into the inventory. And yes, I took him flying. What an honor!

The difference in our experiences is amazing. See, we usually are standing around in shorts and polo shirts, as most airshows are in the nice-weather seasons. We use our fancy GPSs to get to the show, and if we have a passenger, we certainly use a nice, quiet intercom. Oh, and if it might be a little chilly, there’s always the heated motorcycle vest we can plug in. 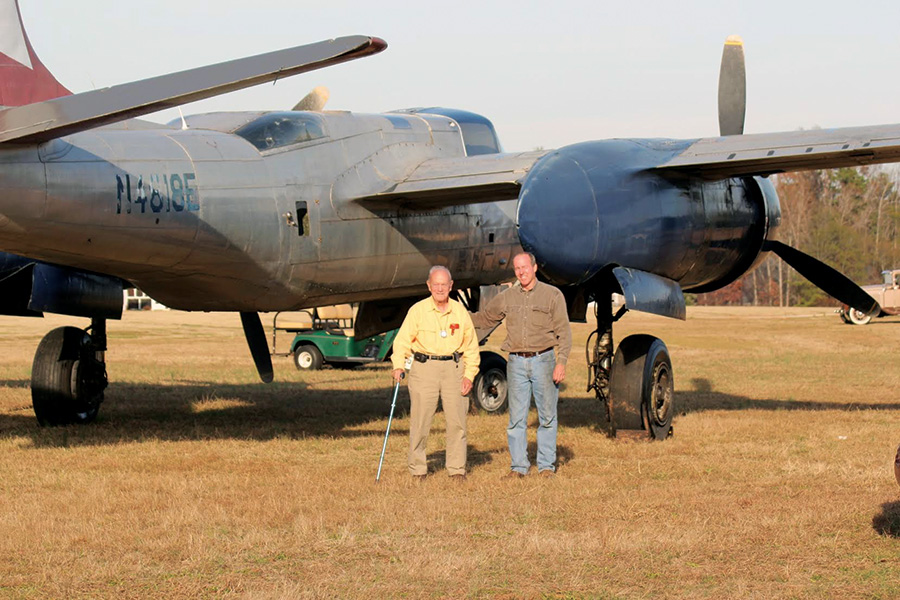 Dave Andrews and Zip Hinton, owner of the A-20 Always.

It wasn’t the same for these guys. There was a war on, and the country needed pilots. We get a chuckle with regards to the Stearman POH, not only for its lack of content, but for some of its seemingly silly things, like starting procedures below 0 F. Really? Who would ever do that? Well, these guys did, and they didn’t have the nice windproof Gore-Tex gear we have today. One of our members has flown with a guy whose logbook showed flights at -20 F in Iowa! On top of the cold there was usually an instructor yelling at them, not exactly like our flights where we are able to enjoy scenery and the wind in the wires. For them it was perform or get washed out. But for those who made it, it was on to other missions.

One fellow told me how he went on to fly the Catalina PBY-5A in the South Pacific as a rescue aircraft. He said his transition training to the Catalina was in the Gulf of Mexico. His next words were, “Those weren’t really waves in the Gulf. Now in the South Pacific, those were waves!” He told stories of hitting big waves so hard that they punched out rivets in the hull. And they could only stay in the water for so long before they had to take off and let the water drain out, then go back at it again for more downed crewman. He said sometimes the water was so rough that they couldn’t take back off and would taxi for hours. They were in war and did their job without complaining, risking their lives to save others. 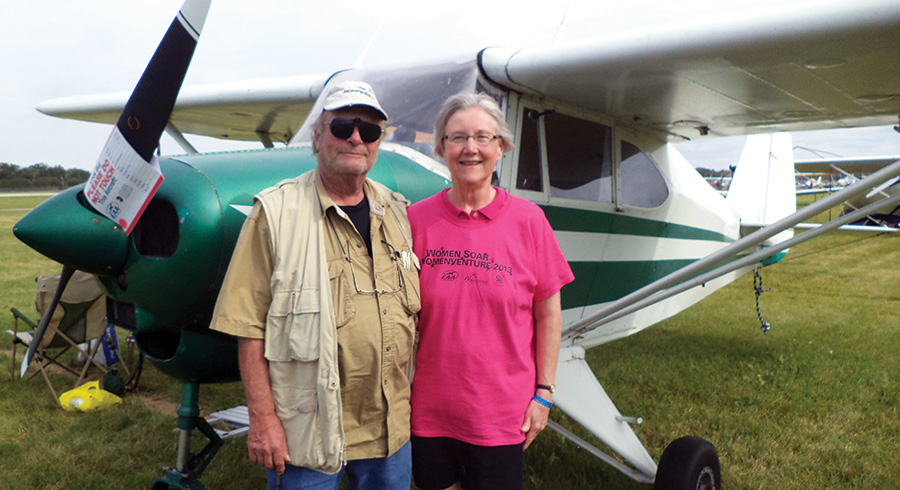 Alan and Lalah Harding at AirVenture. Back in the mid ’70s, before GPS, Alan and two other pilots ferried three new Piper Warriors from the U.S. to Australia. They navigated by adjusting heading every two hours based on forecast winds aloft and magnetic variation.

One of our neighbors at Mallards Landing, our fly-in community, happened to own an A-20. It was actually the same aircraft that was featured in the movie Always. He finally decided to donate it to a museum and word got out of the departure date. A fair number of people showed up, and just like at the fly-ins, I’ve learned to look for the “old guys who stand back and stare.” My son and I noticed one individual doing just that, standing there with the help of a cane. We walked over and asked him if the airplane meant anything special to him, and he humbly said that yesterday was the 62nd anniversary of his last flight in one. Wow! I knowingly looked at my son and we both realized we had a winner, especially when he mentioned the big one, D-Day. Here was a real genuine war pilot, standing in my backyard. He mentioned a few other things, and then I asked him if he would like to go flying. It was interesting to watch him stand straight up and say, “When?”

Well, my son and I loaded him into the RV-10, and except for the takeoff and landing, the controls were his. His flying was impeccable, never off altitude by more than 50 feet while we flew around for 30 minutes. Then he came right back to the airport and said, “I think it is around here.” Again, no GPS!

Dave Andrews is his name, and he flew with the 416th Bomb Group. He has since told us a few more stories and given me all of his logbooks from the War, along with some pictures. One shows him standing next to his A-20 with a big hole in the side next to the cockpit. Dave says they were headed back to England on D-Day, and as they were crossing the Coast of France, he could see the White Cliffs of Dover. Thinking they were safe, he leaned forward to take off his flak jacket, and an 88mm anti-aircraft round came through the cockpit and took out the accessory case on the number 2 engine. He casually mentioned that the round went through right where his head had been a few seconds earlier!

This year at Osh an interesting thing happened as well. Carol and I were sitting down and having an ice cream at the Kelly’s Ice Cream stand. If you haven’t had one of their ice cream cones, you should. They are absolutely delicious! Anyway, we were at a table by ourselves when this couple asks if they could join us. They introduced themselves as Alan Harding and his wife, Lalah. I noticed the Piper Tri-Pacer on his hat and we started talking. Turns out he has been going to AirVenture since it was at Rockford. But that wasn’t his best story. Somehow we started discussing long-distance flying, probably since we had just returned from Alaska a few weeks earlier. Alan mentioned he and two other guys once ferried three new (less than 50 hours from the factory) Piper Warriors to Australia in the mid ’70s. I assumed they ferried them to the West Coast and then shipped them. Nope! They flew all the way. Knowing GPS didn’t exist then, I asked how they navigated. He said they adjusted headings every two hours based on forecast winds aloft and magnetic variation, which is significant in that part of the world, all without an autopilot. One of the airplanes had a sextant, but no one knew how to use it! Hilo, Hawaii was only missed by 60 miles, but they could see it a long ways out. After Hilo the next stop was Funafuti in the island nation of Tuvalu, about 600 nm north of Fiji. Their diesel generator had failed the week before and had just been fixed to power the AM radio station they were homing on, unbeknownst to them! Alan said he didn’t do any more transoceanic flights after that, even though he was asked. 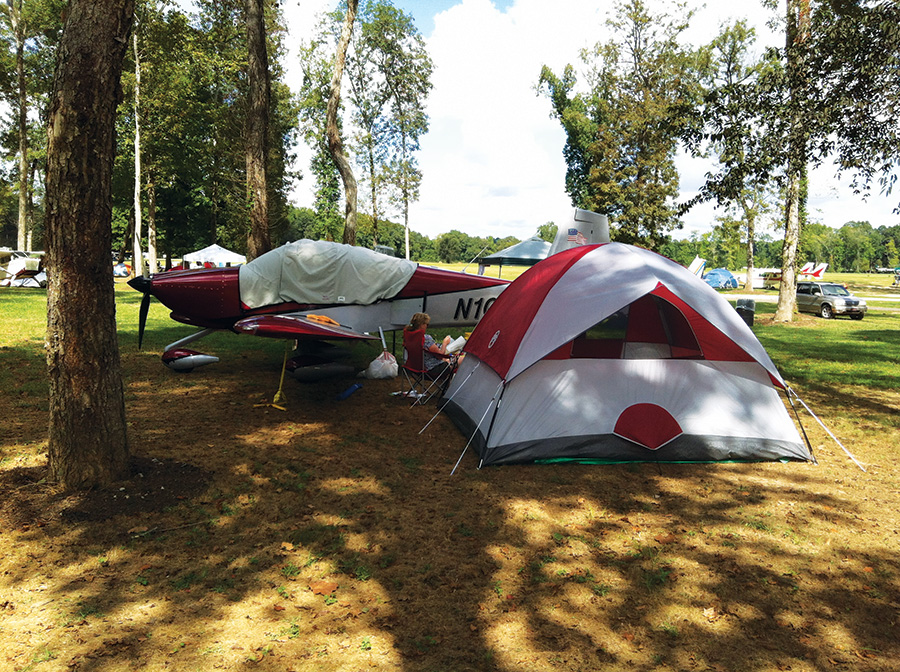 The author’s RV-10 camping under the trees at Triple Tree. Really prime camping as far as fly-ins go!

I remember working on my Commercial license in the Aeroclub’s T-34B with only a compass and a clock for all of the cross-country work, but those days are long since gone. I thought about turning off the four GPSs and the autopilot for the trip home, but I didn’t. It’s so much more fun to use the automation and enjoy the scenery, as well as make sure we aren’t violating any protected airspace. After all, that’s why we fly, right-to have fun? And I sure am glad there are guys like Dave Andrews and his colleagues who flew when it wasn’t so much fun.

I’ll close with another fly-in gem that some of you may already know about, and that is the Triple Tree Aerodrome Fly-in located in Woodruff, South Carolina that usually occurs the first week of September. In all of my years of flying and attending fly-ins, I have to say that this is becoming my favorite one. Three things really stand out to me. First, all of the volunteers are constantly riding around on carts asking if you need anything, could use a ride, etc. Second, the evening meals are fantastic, rivaling some four-star hotels we’ve probably all stayed in at one time or another! Third, there aren’t any vendors or airshows distracting everyone. We all get to sit around and solidify old friendships or make new ones and, of course, tell some aviation stories while watching Cubs and Cessna 150s in formation at sunset. Now that’s fun!