[The editors of KITPLANES® are well aware that as it is now July, winter weather is but a fond dream to many in the temperate zones of the northern hemisphere. But our aviation friends south of the equator might still find this relevant—and besides, it took several months for us to pry the manuscript out of the icebox that was Missouri this past winter.]

When winter hits northwestern Missouri, the opportunities to get some open-cockpit flying in become almost like national holidays to us. They are few and far between. The days with the temperature high enough to actually strap on your plane and commit aviation are very rare. When the temperature is high enough for you to be able to fly, the other major weather factor has to be factored in, too. 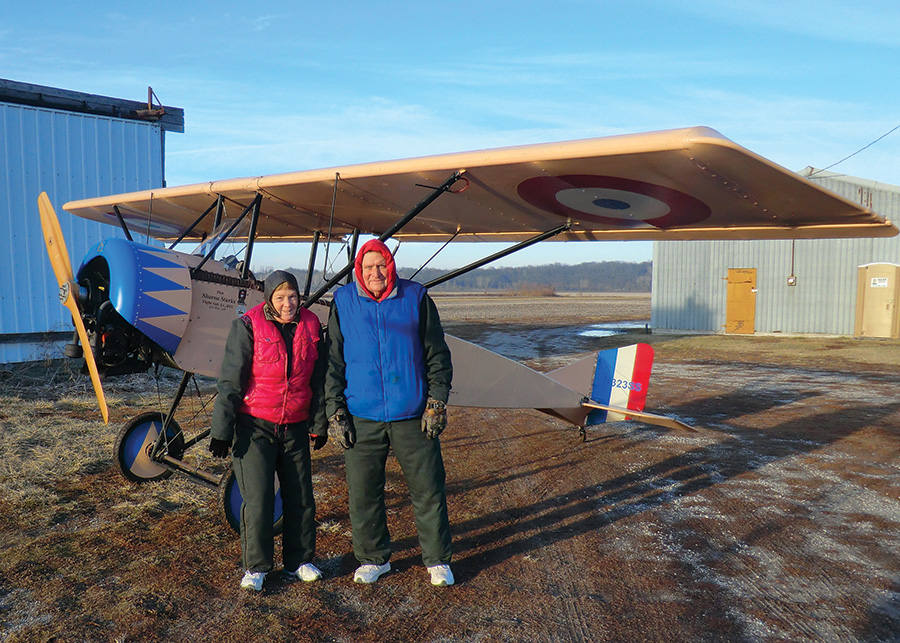 Dick and Sharon Starks get ready to fly their Morane Parasol and Nieuport 11 replicas. After landing they were a lot colder and more tensed up!

Yep, a warm winter weather day in Missouri usually means howling winds from the southwest. Just the other day, in January, it got to 51 degrees! We all hit the airport, ready to blow some rust outta the cylinders of our lonely birds.

It was not to be. The winds slowly started to build, and by the time it did hit 51°, it was too windy to even open the hangar doors.

From October through April winter weather flying in Missouri is a throw of the dice. Just last year we had snow on May 4th. Several years back when Sweetie and I were still teaching, we had a no-school snow day on October 5th.

From October through April we have to watch the weather like hawks, hoping for chances to fly without coming down with a terminal case of the shakes and shivers. You guys flying around in aircraft with enclosed cockpits and heaters just don’t know what you’re missing; then again, maybe you do. 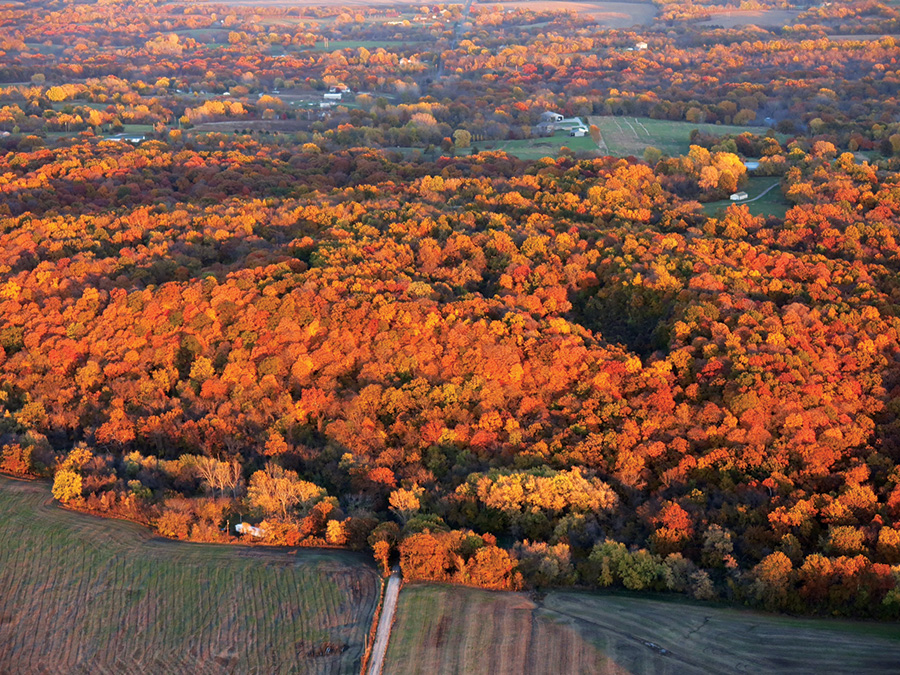 One good reason to fly in the fall is to see scenes like this. Three days after this photo was taken, there were steady winds over 30 mph and all the trees were bare and brown.

Mind you, there have been some winters when for long periods of time, there were no days with the desired weather conditions. We’d get so feverish for a flying fix we’d look for any excuse to go hit the airport. One winter, when we were a lot younger and a little more stupid, there was snow on the ground, but the runway was clear. After weeks of howling winds, the forecast was cold, but sunny, with light and variable winds. There were deep snowdrifts around the hangar doors. But, golly gee, the runway was clear. That was good enough for us. We loaded up our snow blowers and shovels and headed for the field. Snow was cleared around the hangar doors, so they could be opened. Planes were pushed out past the mounds of snow. 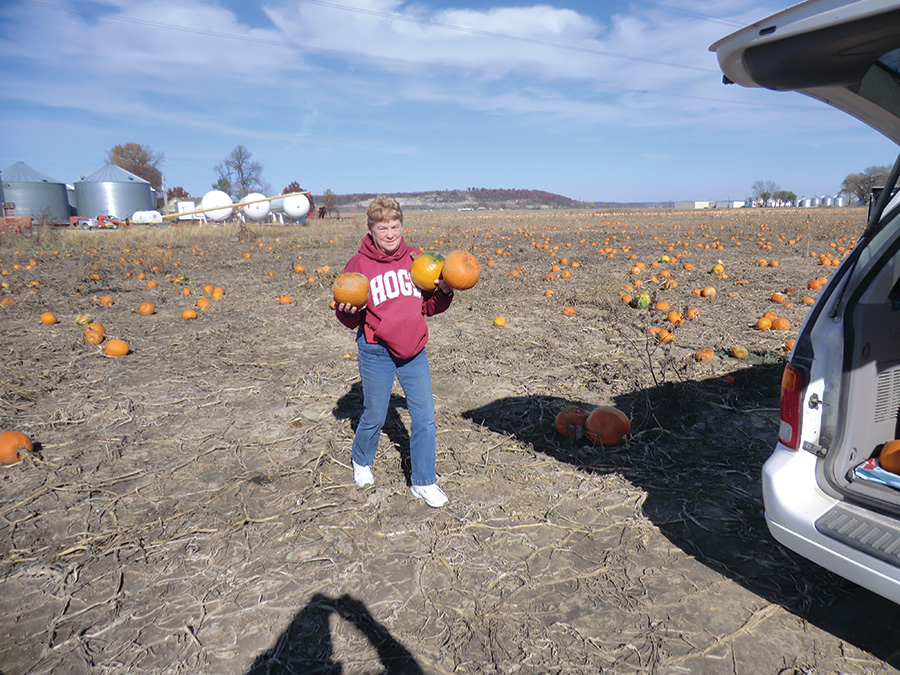 After the pumpkin patch closed for the season, several local kitchens and harvesters were invited to come out and take all the pumpkins they wanted. Sharon Starks loads up the Stealth Van with more bombs from what was left over.

Starting a plane in cold weather is always a challenge. But, we got ‘er done. After a lot of complaining from the engines, with sounds like the pistons were swapping holes and assorted gurgles, clunks, clangs, back-fires, farts, and other mechanical complaints, the engines were coerced into starting. They were given long warm-ups on the ground to make sure the oil was flowing. Once we were sure the oil was actually circulating, we mounted up, waddled out to the runway and took off. The flights were very short. It was brutal! We all made just one trip around the patch and that was enough. But, we’d got our flying fix for the month in only five minutes. Our work here was done.

It was after we landed that we realized we’d forgotten the one mandatory ingredient necessary for survivable wintertime flying. The most important item to have on hand in the hangar during these cold flying days is a huge hot pot of coffee ready before you take off. Nothing’s worse than standing there shivering uncontrollably while waiting for that stupid red light to come on.

Of course, if the coffee is made and you’ve just crawled out of your personal flying refrigerator, it’s always nice to be able to hold the foam cup in your shaking hands steady enough to actually drink from it. 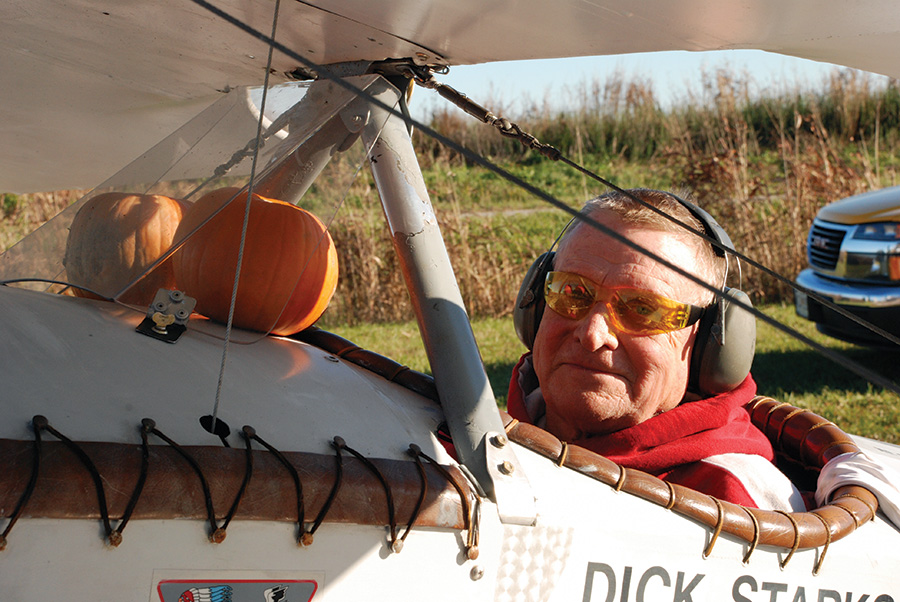 Dick Starks gets ready to head out in his Graham Lee designed Nieuport 11 fighter to do battle. You can notice his much easier to handle bomb load. They will fit in the pouch of a hoodie sweatshirt.

If you’re shaking too hard to hold the cup without slopping it all over the place, you’ve only got one other option—you’re gonna have to have some helping hands (not your own) place the cup, fill to the brim, and put it on the table for you. Then you bend over, and with as much dignity as you can muster, slurp the life-giving brew from the cup. But, having personally gone through this many times, I can say, when you’re that cold, you don’t give a hoot about dignity. 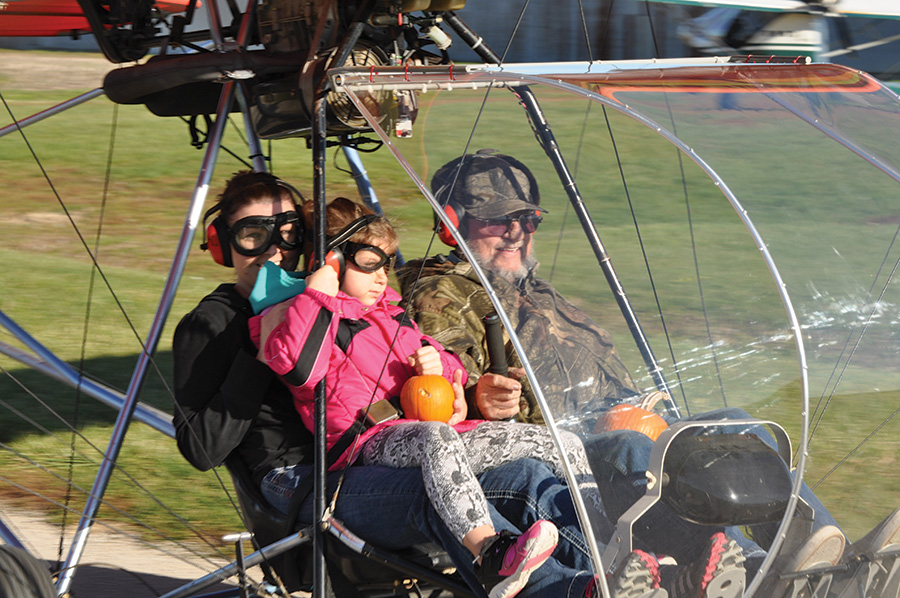 Tricia Starks and grandson Sam head out with Dick Lemons for a bomb run in Dick’s “Double-Wide.”

Why, you ask, do we as conscious, mature, serious adults, purposely choose to make ourselves suffer through this agony? It’s because the cool, dry air in winter also presents some wonderful excuses for some fine-quality flying time in an open-cockpit aircraft.

The air, when the temperature indicates you can go flying, is usually crystal clear. You feel like you can see forever. Your engine likes it, too. The oil never gets too hot. And, it feels like it’s gained 20 or 30 horsepower. Your prop feels like it grew a foot in diameter, too.

Since we fly just about any chance we get, whether it’s 100° or 40°, the difference in power is not that big a deal for our lightweight little birds. However, the no bugs element is a really big deal! A big old fat juicy June bug flying through the prop can just about take you out of the cockpit. They do leave a bruise, too! Best of all, you don’t have to clean all the bug innards off your prop, windshield, and the leading edges of the wings.

There’s one other very important item to consider. You must make sure that while you’re wearing all your cold-weather flying gear, you can actually climb into the cockpit. The acid test is making sure you can get out of the cockpit after you’ve landed and you’re pretty-much frozen stiff. Being able to get out of that cockpit quick is a necessity! After 30 or 40 minutes flying in an open cockpit in 40°, you usually have to go hit that porta-potty after the engine is shut down right now. 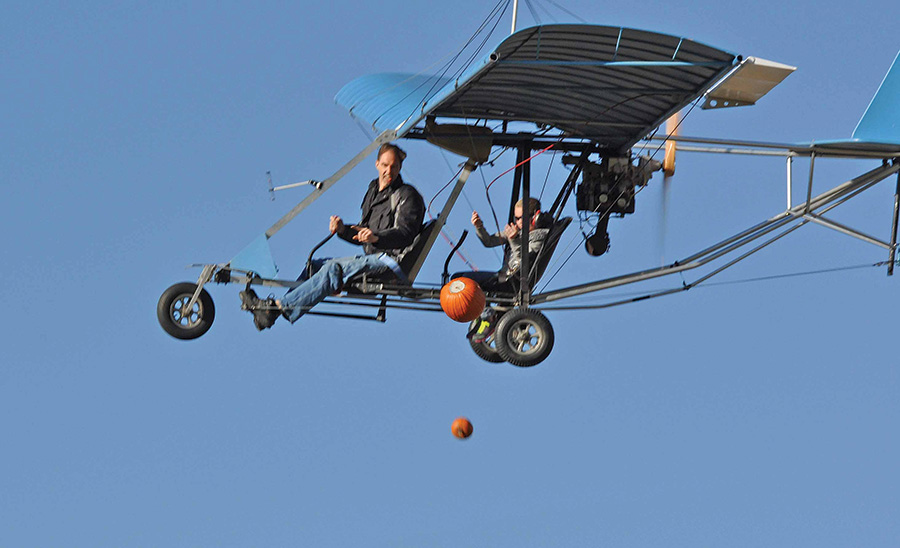 Bombs away!! The bunker buster heads downhill to make a most satisfying crump when it hits and explodes all over the place.

Actually, when it comes to clothing, just imagine what you’d wear if you were snow-blowing a long driveway when the temperature is in the 30s and you’re facing into a 90-mile-per-hour wind. That will be your designated cold weather flying gear. I can only shudder at what those brave young men went through in WW-I, flying in their open cockpits for hours at a time at altitudes up to 15,000 feet…and higher…in winter…without oxygen!

Our cold-weather tribulations are nothing compared to what they went through.

The fall/winter of 2013 was pretty much the same as other years of winter flying. Scattered among the days of bitter cold and howling winds were indescribable days of beautiful flying.

In 2013, the Annual Liberty Landing International Airport Pumpkin Drop Championship contest had lasted for three consecutive days. Not only did we have three days in a row of great flying, we had an unlimited supply of pumpkins. The owner of Liberty Landing International Airport, besides owning and flying a beautiful Citabria, also runs Carolyn’s Country Cousins Pumpkin Patch, a Kansas City holiday tradition. The summer of 2013 boasted the best pumpkin growing season in 10 years. A flight over the pumpkin field was just a sea of orange dots in the tens of thousands. And, this was after the season had ended. The owner said we could “have at it” and bomb as many as we wanted. Since we were dropping them in a field that was going to be planted later on in the fall, they would serve as some extra fertilizer for whatever was going to be planted there. So, for three straight incredible flying days, the “crump” of exploding pumpkins echoed over the river bottoms. It was just swell. Unlike last year, we didn’t have any near misses on the crowd of onlookers. We’d learned where to place the target. We set the bomb run line from IP to target on the other side of the runway, away from the avid crowd. The onlookers were at least 300 feet from the target and not in any danger…we thought. 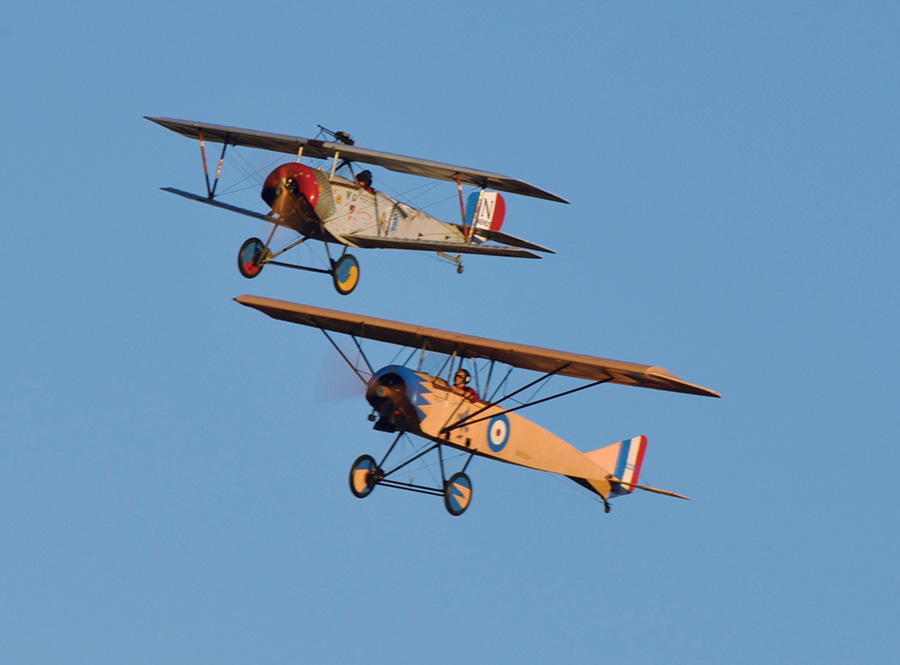 Another plus of winter flying is the incredible cacophony of colors you get when you’re looking down on a forest in all its fall color glory. It’s just plain eyeball-bugging. It was worth the price of shivering uncontrollably to look down on the crumpled sea of red, gold, yellow and green. Driving in a car looking at the trees in their fall colors is nothing compared to flying over the forest of undulating colors.

So, between dropping pumpkins and taking riders up to goggle at the wonderful fall colors, we had a real good start to the coming challenges of winter flying in our wonderful little WW-I replicas.

Now we just have to wait and see what new challenges the winter will uncover. Maybe someone will decide to re-cover a plane or build a new one; not Sweetie and me this winter. We’re taking a break. Our summer project is to strip and repaint her Kolb.

Dick Starks has written two books about the joy of flying; “You Want To Build And Fly A What?” and “Fokkers At Six O’clock!!” He was the recipient of Flying’s 2001 Bax Seat Award “for perpetuating the Gordon Baxter tradition of communicating the excitement and romance of flight.” Dick and his wife, Sharon, both fly WW-I replica aircraft.

Ron Alexander - November 18, 2008
0
Finishing tapes not only strengthen areas that need reinforcement, but they also cover unsightly screws, rivets and rib-lacing cord. This month we cover the types of tapes available, where they should be applied and how to apply them; by Ron Alexander.