Clint Eastwood (as Dirty Harry) once said, “A man’s got to know his limitations.” I think that when it comes to building and flying airplanes nothing could be closer to the truth. Yet I continue to see many push the limits of their knowledge and skills in both areas. Sometimes the result is an unreliable airplane that is a hangar queen due to poor workmanship. Sometimes it can be outright dangerous. And in too many cases, the outcome has been an accident with injuries or even death.

In today’s world of the Internet, the EAA (including local EAA Chapters), and with the proliferation of homebuilt aircraft throughout the world, there really isn’t any excuse for not seeking help in the areas that might push an individual’s comfort or experience zone. To ask for help is a sign of maturity and wisdom. Use it.

Even though I have built 10 airplanes over the course of many years, there are still a few skills that I know I am not competent enough to perform on an airplane. Welding is the biggest example that comes to mind. Sure, I’ve dabbled in it, and even met the requirements for my A&P Certificate. I remember taking the practical test for the A&P and explaining all I knew about welding and emphatically stating to the examiner that I knew I was not competent enough to weld on aircraft and didn’t intend to do it anytime soon. 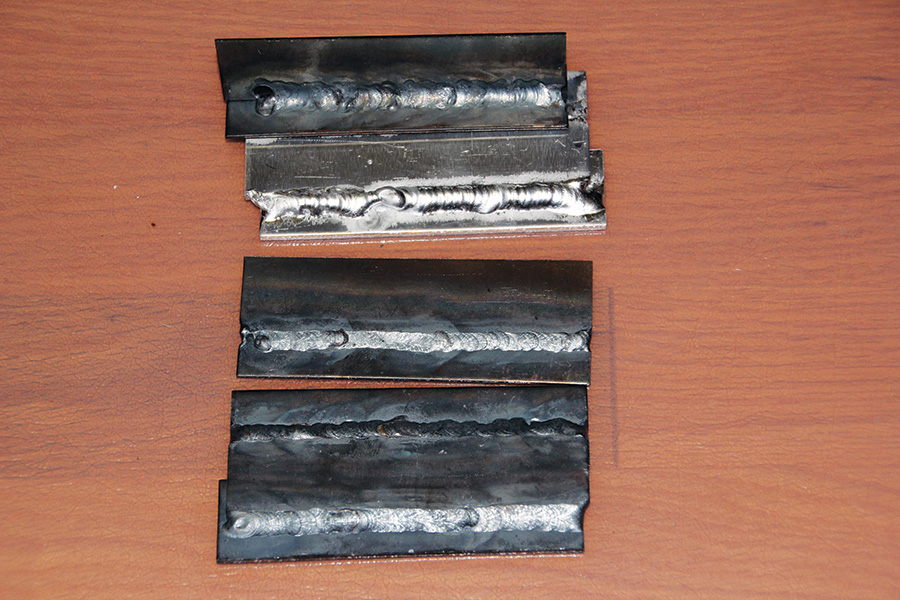 I acknowledge that I still need lots of practice, but these are the best welds I have done in my life, thanks to the EAA SportAir TIG Workshop.

Some of you may be aware of the recent nosegear service bulletin issued by Van’s Aircraft for the RV-10. Unfortunately, I was one of those who experienced the problem with some pretty severe cracking, requiring removal of the engine and engine mount so it could be properly repaired by—you guessed it—welding! I not only didn’t have the equipment, I still didn’t have the skills. So the aircraft was down an extra day while the mount was off to the welder. In the meantime there also appeared a crack on the pilot’s side step on my RV-10. Of course, it also needed welding. Here’s my limitations getting in the way again! A neighbor with a TIG welder offered to repair it and I watched. Boy, that sure looked easy! See, in the past the only welding I had done on 4130 steel was with a torch, and I was real good at creating lots of holes and scrap. Sound familiar? For the last few years, my torch was relegated to a dusty corner and came out only for cutting rebar or other non-skilled tasks.

For years I had been promising myself I would take one of the EAA SportAir Welding Workshops, and these two episodes told me it was time to act. So, last weekend I managed to attend the TIG course in Griffin, Georgia, taught by Scott Skrjanc of Lincoln Electric. This was a very intense course with only two hours of lecture. The rest of the two days were spent in your own booth with all of the proper tools and equipment to learn how to weld 4130, stainless steel, aluminum, and chrome-moly tubing. Scott is probably the Leonardo da Vinci of welding. I learned many things that weekend, including two important ones: I probably won’t live long enough to ever weld like Scott, and I probably still shouldn’t TIG weld on an aircraft! It sure looks easy, as I mentioned earlier, and I did manage to get some decent welds by the second day, but it takes lots of practice and experience. I’m pretty sure taking this class was not unlike learning to fly—it’s really a license to learn. As soon as I find a good deal on a TIG welder I will start practicing. 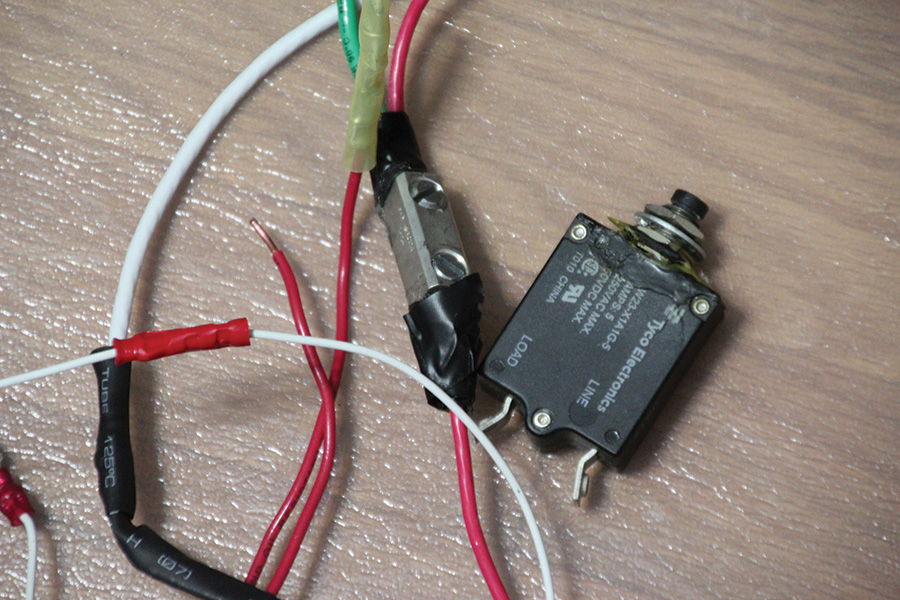 These were all pulled out of the same RV-10: Solid copper wiring with splices, screw wire splices, repaired circuit breaker, and three splices within 18 inches of wire.

Unlike welding, one of the areas I am pretty good at is the electrical system, and I’ve been performing a pretty fair number of panel upgrades this year. I really enjoy that part. What I don’t enjoy is seeing some of the really poor wiring jobs on some aircraft. I’ve seen way too many recently where personal limitations and skill levels were wildly exceeded. As an example, I assure you that there is no room for 14 AWG solid copper household wiring, screw-type wire splices, and repaired circuit breakers in any aircraft. Period. I had an RV-10 come through recently that was so bad we agreed to rewire the entire aircraft. It’s really a shame, and almost criminal, to sell an airplane in this shape to an unsuspecting buyer. By the way, a pre-buy was done, and the buyer was told the wiring was fine! So sad. When you look at the picture, I hope you cringe as badly as I did when I saw this. Yes, these came out of the airplane and were not “built” for this column. Bad practices aside, today’s interconnected avionics really require robust and proper wiring practices, so don’t hesitate to get help. Consider one of the EAA Sport Air Workshops on wiring as a starting point. 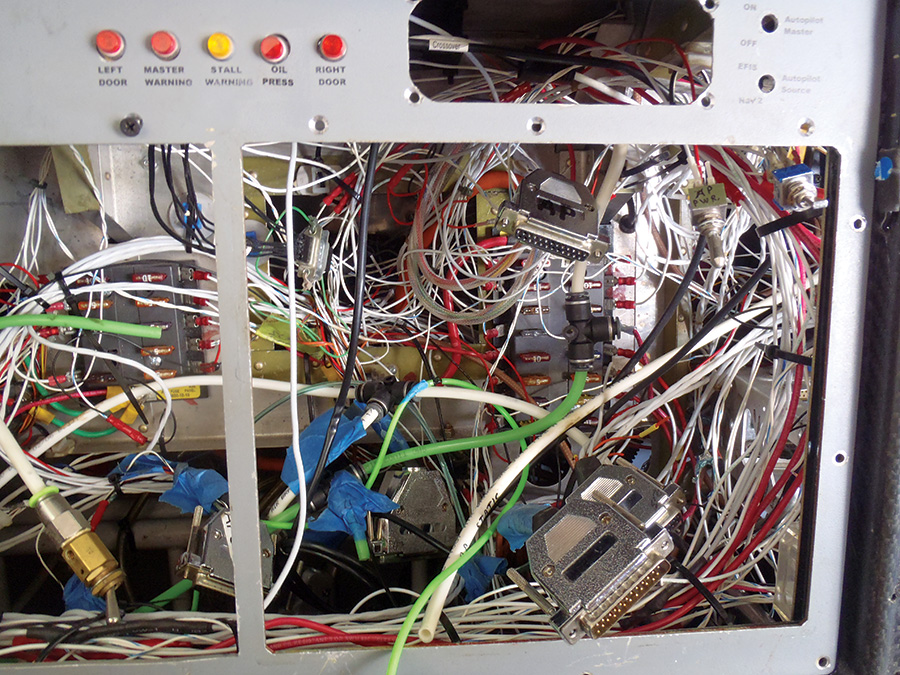 This is a good example of personal limitations being pushed. Lots of bad wiring practices here, all of which were hidden behind the panel.

When it comes to operating limitations, we’ve probably all seen a few people disregard them, whether it was flying with multiple people in the cockpit during Phase I or flying outside the test area prior to completion of Phase I. Sometimes they got away with it, and sometimes the outcomes were tragic. The FAA recently released Advisory Circular (AC) 90-116 that now spells out when it is appropriate to have an additional pilot in the cockpit during flight-testing of Amateur-Built aircraft. Unfortunately, it is a little complicated in that there are requirements for both the crew and the airplane. I think the crew requirements are very well spelled out and appropriate, but I think they will be hard to meet in most instances due to currency-in-type and total in-type experience. I bet those who are pre-disposed to not follow the rules will continue to not follow the rules. I hope I am proven wrong. As a DAR I have begun adding the verbiage to the limitations that allows an additional pilot onboard when in compliance with the Advisory Circular.

The last area of personal limitations I want to highlight has to do with the actual flying. We all learned the proper preflight procedures when we first learned to fly, and they primarily focused on the airplane. With the recent advance in avionics, especially automation, I believe there has to be just as much focus on preflighting the pilot. In many ways today’s newest Amateur-Built aircraft rival and even exceed the capabilities of the newest airliners. Autopilots can be engaged as soon as you dare on takeoff and then completely fly the route, the approach, and even execute the hold if a missed approach is necessary. But that doesn’t mean the pilot’s skills, proficiency, and understanding of the systems is on the same level. And especially for newly-rated Instrument pilots operating in some of today’s complex airspace, things can get ugly really fast. Much like welding, it takes practice to become proficient with the new systems. Time spent in the cockpit on the ground is time very well spent and can pay many dividends if things go wrong in flight, whether it’s a real systems failure or expedited requests from ATC. It is important to know how to use the equipment, as well as ensure it is doing exactly what you want it to do, and if not, how to stop it. I think the saying that “the pilot is the final authority as to the operation of the aircraft” is really pertinent here.

All of this doesn’t mean we shouldn’t delve into new areas, whether it’s building, flying, or learning a new skill. Just take the time to ask whether you might be exceeding your personal limitations. No sense getting scared when we should be having fun! See you next month.

Building as a Group

Dean Sigler - February 14, 2012
0
The Independence Five is an Oregon-based group building a bevy of DH.2s. Dean Sigler explores their approach to building and reports on how the project is progressing.

Dick Starks - December 12, 2012
0
When the National Geographic Channel throws down an aviation challenge, The Dawn Patrol answers the call.

Jim Weir - July 19, 2008
0
Columnist Jim Weir puts two, two, two LED lights in one hole, angled to ensure the maximum nav light visibility in any direction. He explains how to put the system together and explains why heat matters.