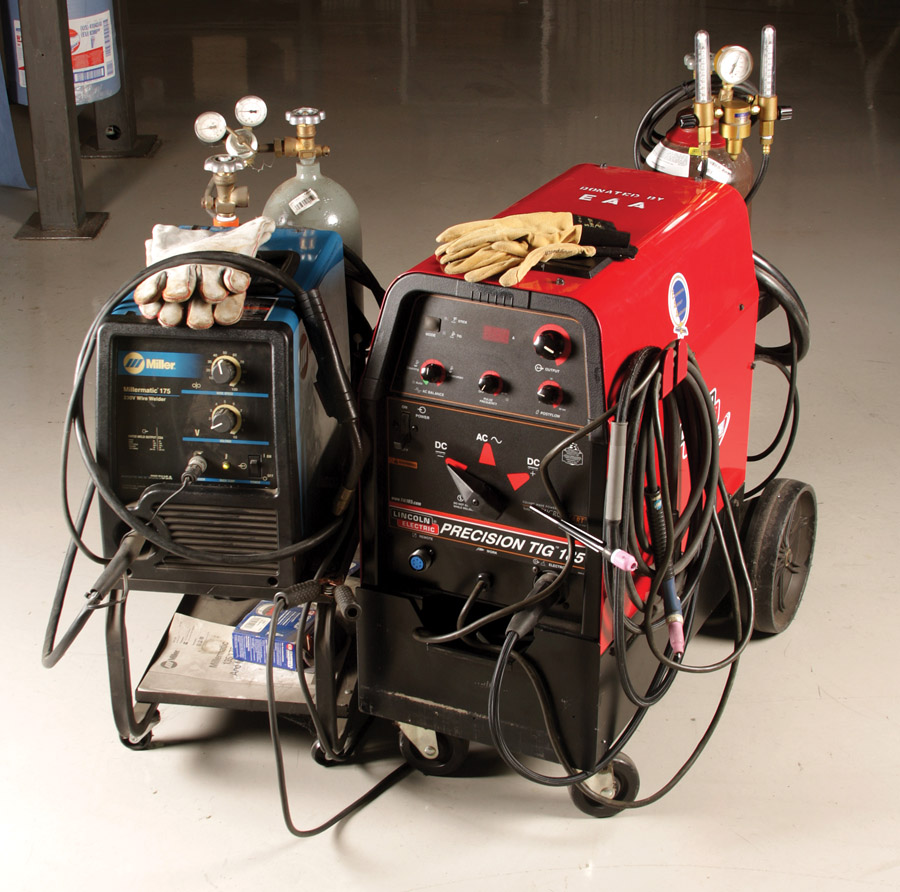 Way back in the December 2014 issue, I penned a column about making precision joints for tube weldments [“Totally Tubular: Tips for Tube Notching“]. It’s about time, then, to talk a little bit about welding.

The inspiration for the timing of this column came from my local EAA Chapter (494 of Corona, California), which won an industrial-grade Lincoln TIG welder from the EAA at the 2017 OSH airshow. The only hitch was you had to pick it up at AirVenture and be responsible for transportation. Our chapter treasurer, Conrad Norquist, sent an email requesting attending members to volunteer to pick up the “TIG welder we won” and help load it onto the famed DC-3, Flabob Express, for the trip home. 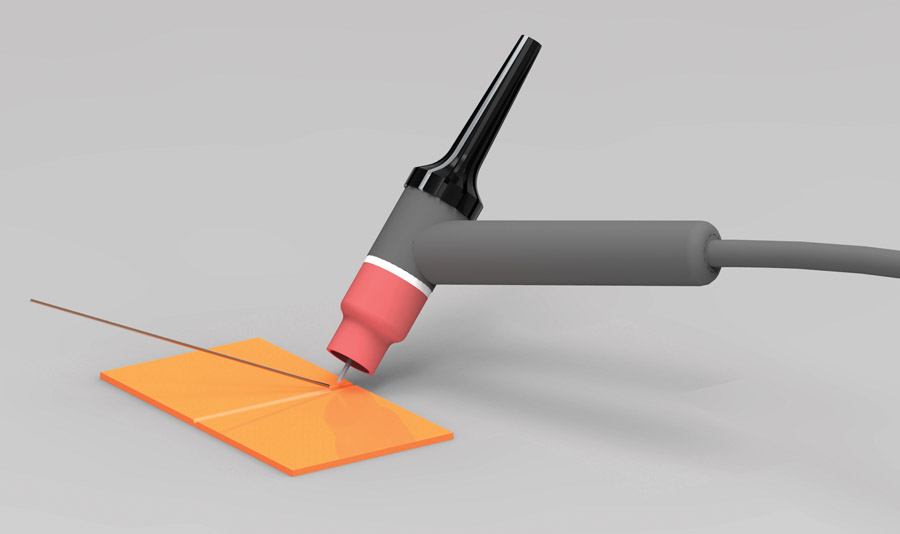 TIG welding consists of the torch, which has the gas hose and arc-conducting wire integrated into the handle. The pink ceramic nozzle directs the shielding gas over the blunted needle-point tungsten electrode. The welder holds the torch in one hand and feeds the filler rod into the weld seam with the other, usually in a series of evenly spaced “dabs” that result in the classic dime-on-dime TIG bead.

That was pretty exciting news! If you’re going to get a welder for aircraft work, it should be a TIG machine. TIG is the crème de la crème method for aircraft welding. While the basic concept of using an electric arc to weld steel is essentially the same for stick, MIG, and TIG (the three most common type arc welding machines for small shops and garages), the TIG process is much more controllable. Where a TIG welder can control the weld with the finesse of an artist’s brush, a stick or MIG welder is like a spray gun. There’s nothing wrong with a spray gun if that’s what the job needs. But you need a brush to paint the Mona Lisa—not to mention an artist’s touch combined with skill and experience. That’s what makes TIG the preferred method for aircraft welding. 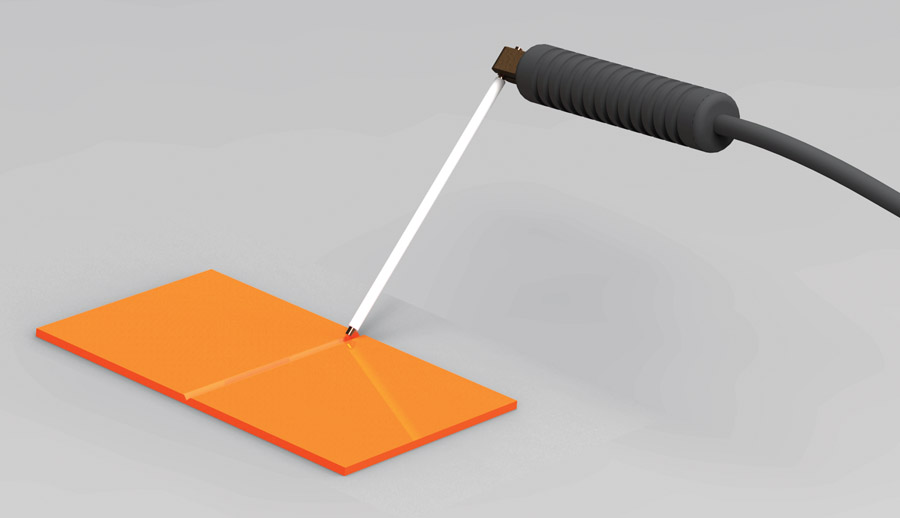 Stick welding consists of a flux-coated rod clamped to a “stinger” handle. The welder’s experience tells him how fast to feed and traverse the weld bead.

Stick welding is the original arc welding method. It’s mostly used for structures like buildings, bridges, and ships, but many hobbyists use small portable stick welders because they’re simple to operate and low cost. The stick electrode, or welding rod, is consumed by the arc and deposited as the weld filler. Stick welding rods are coated with flux, which looks like a layer of stale cake frosting. The flux burns off to produce a thick fog to shield the weld from atmospheric contamination, primarily oxygen. As the weld cools, the flux forms a slag crust to further protect the weld as it solidifies. 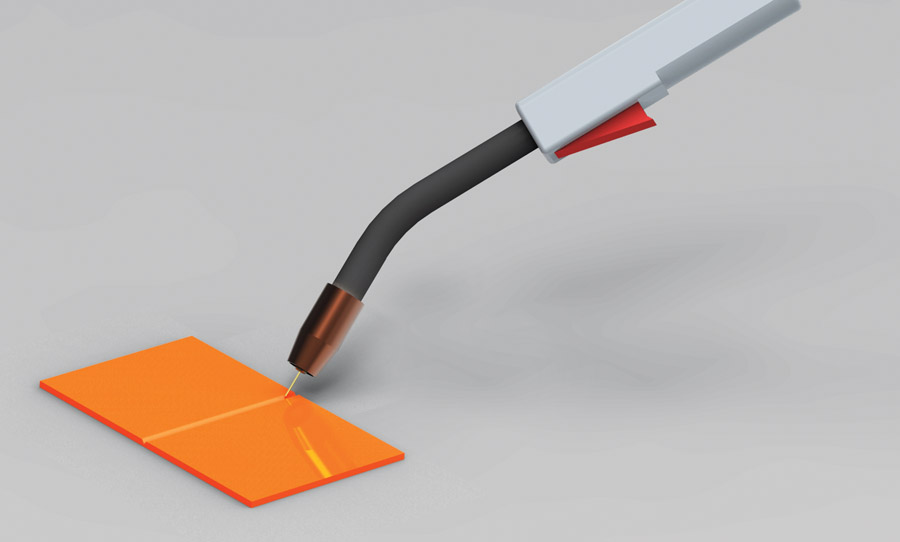 MIG welding consists of a welding gun (with a trigger to start the weld) that shoots a continuous stream of welding wire, fed from a spool integral to the welding machine. The hose from the machine carries the inert gas line, the wire feed liner, and the conducting wiring for the arc.

MIG welding is a form of semi-automated stick welding: instead of a rod, electrode wire is fed continuously and automatically through a “gun.” MIG machines can use welding wire that has a flux core, which shields the weld like flux-coated stick rods, or solid wire shielded by piping gas from a tank (usually an argon+CO2 mix) through the gun nozzle to envelope the weld. Unless you’re welding in harsh winds, gas is generally preferred to flux core because there’s no slag to chip off after the weld cools. MIG is the predominant method for production and robotic welding. It’s easy to learn and, while not as pretty or capable of doing delicate work as TIG, when the application is appropriate, it’s structurally as good as any other kind of welding. If you want to add basic welding capabilities to your shop, a 110v, gas capable, MIG welding machine costs about $500.

With stick and MIG welding, the arc electrode and the filler rod are one in the same: Strike an arc, and the heat from the arc simultaneously melts the base material and filler rod, with the filler being deposited across the gap into the molten base metal to form the weld bead. The melting of the base metal is critical to a good weld. Simply depositing filler rod over the top of a seam without the heat penetrating the base material produces a useless and, in fact, very defective weld. 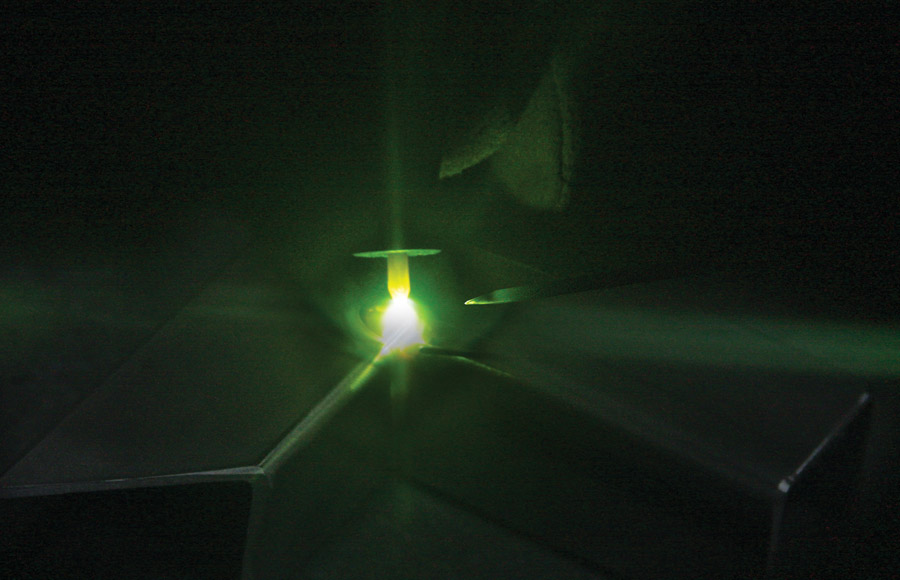 View of the TIG arc through the welder’s helmet. The filler rod is dabbed to create a sequence of beads.

TIG is fundamentally different in that the arc electrode, which is a tungsten rod, doesn’t melt. This allows the welder to pinpoint the focus of the arc and, through the use of a pedal, vary the current of the arc to control the exact amount of heat. Once the correct molten “puddle” of base metal is established, filler rod is “dabbed” into the puddle (like an oxy-acetylene welder would do) to refill the puddle back to, or preferably just above, the original surface. A stream of inert gas (usually argon) envelopes the tungsten to both shield the weld from the atmosphere and promote arc stability. It sounds simple, but it takes a lot of practice to be a good TIG welder. 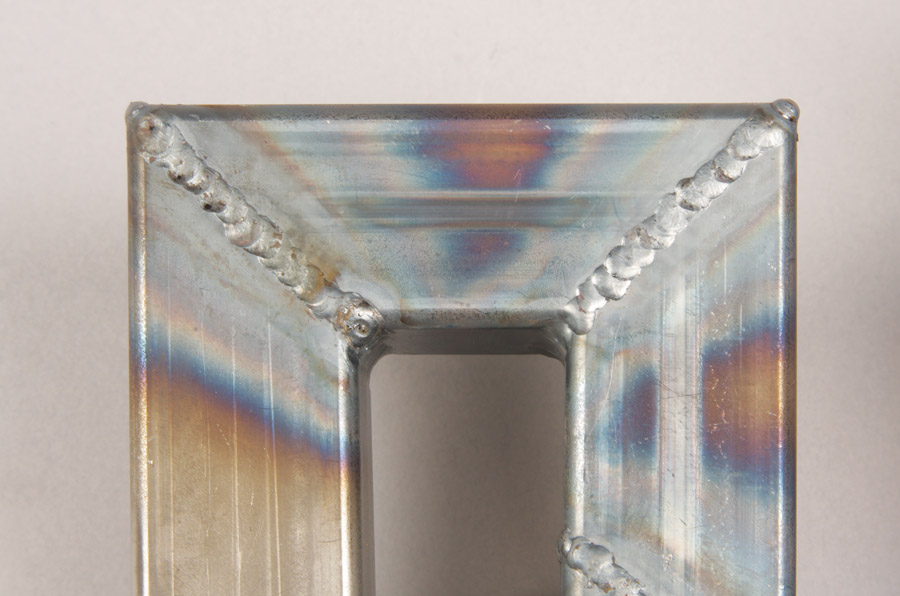 The author’s practice beads on one-inch square tubing. Grade: C-. Note the weld beads are not very straight and the spacing very inconsistent. This is after eight hours of practice and coaching by a 20-year professional.

All welding benefits from well-fitted joints and immaculately clean surfaces, but because aircraft structures tend to be thin-wall tubing, one must be particularly sensitive to the cleanliness of the material and the precision fit of the joints. Dirty joints in particular can cause all sorts of problems with contamination in the form of inclusions and air bubbles (porosity). Ill-fitting joints run the risk of being weak because the filler rod is being used to bridge gaps instead of to backfill fused-together base material. 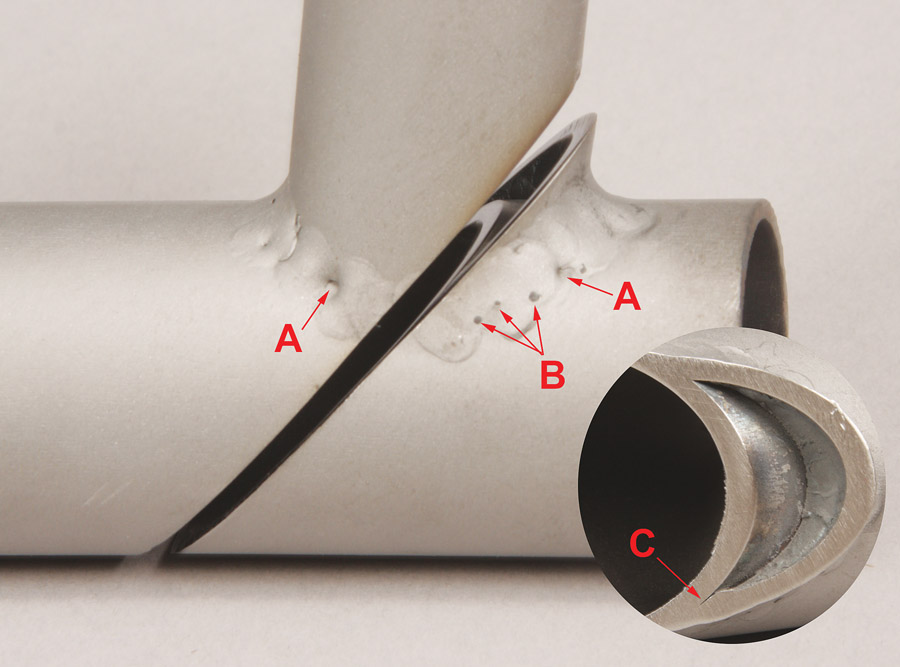 Some telltale signs of a bad weld: Cratering (A) happens when not enough filler is added. Bubbles (B) are caused by contamination or improper shielding (the gas flow could be too low or too high). Lack of penetration (C) can only be detected by destroying the work. Apprentice welders must cut apart most of their welds to prove they know what they’re doing. Only after they produce perfect welds every time are they allowed to make “real” welds.

The Flabob Express never made it to OSH. It made it as far as Arizona before it was grounded with a mechanical issue. So the TIG machine ended up at the UPS store in Appleton and going by truck to California. It took a little longer and wasn’t as romantic as having flown to its new home in a 70-year-old airplane that was, incidentally, made by the archrival of the inventor of TIG welding (it was invented at Northrop in 1941 as a solution to weld magnesium).

Special thanks to Billy Griggs for TIG welding instruction.

Ernst Bickmeier - December 23, 2016
0
It took 10 years for Hansueli and Samuel Gautschi to complete the ultimate do-it-yourself project, and the result is an absolute gem. By Ernst Bickmeier.

Jon Croke - April 25, 2020
0
The battery you install in your homebuilt kit will have nearly the same kind...