In most journeys there is usually a destination. For many pilots that destination is the left seat at a major airline, a journey that is probably not unlike Hercules’ trials given all of the mergers, acquisitions, and furloughs in the industry. It’s interesting to me that many airline pilots see general aviation as a destination when retiring from the airline, especially with all of the exciting choices in sport planes now. 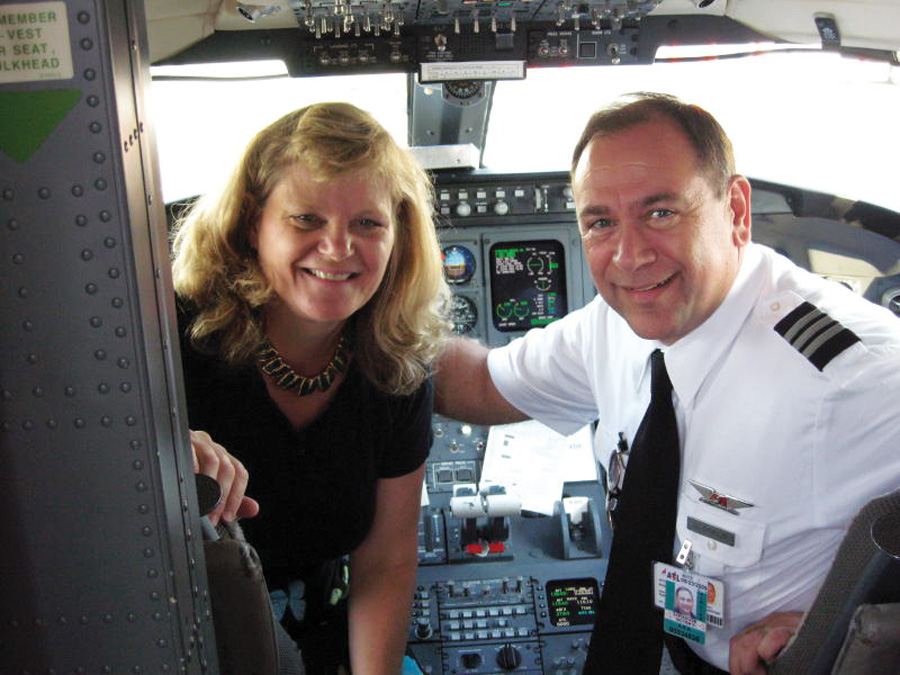 Vic and Carol Syracuse. Vic spent almost a year flying a regional jet, which really gave him some insight into the similarities and differences between scheduled air carrier ops and general aviation sport flying.

Having been primarily a general aviation pilot mainly focused on kitbuilt airplanes, with a small stint in part 121 regional carrier flying, I have some observations regarding the transference of skills from one type of flying to another, as well as my own experiences with regards to similarities and differences between the two. This will be a multi-column saga, so hang on. Also, I am not here to disparage anyone. We are all brethren of the wings, so to say.

Between living in an aviation community and hanging out with a great group of pilots called the Falcon RV squadron, based at Falcon Field in Peachtree City, Georgia, I get to regularly see many aspects of the spectrum. Both groups encompass a great cross-section of pilots from all walks of aviation—pure general aviation, military, airline, and corporate—probably not unlike many flying clubs throughout the world.

Here’s the biggest observation I’ve had: those who take the time to really understand their aircraft systems are the ones who usually do the right thing when needed, especially in an emergency. And I have found that those who spend some time building their own airplane really do begin to understand systems from a whole new perspective.

First, to set the stage, let’s start with some basics that we all grew up on as fledgling pilots: Aviate. Navigate. Communicate. How many times have we heard that axiom? I also believe there should be one other imperative added: Think. That’s right—think before acting. Now, I am not advocating that one takes a long time to decide on a course of action; as we all know, there is no pause button except when in the simulator. But there are times when reacting to rote-learned skills will not provide a proper outcome, and I intend to share a couple of firsthand experiences that drove it home to me.

I also believe that flying can be simplified even further into two categories: decision-making (risk elimination) and aerodynamics. See, if we make all of the proper decisions, starting with trip planning, and then fly the airplane within its designed envelope, the outcome should be a very safe and enjoyable flight. 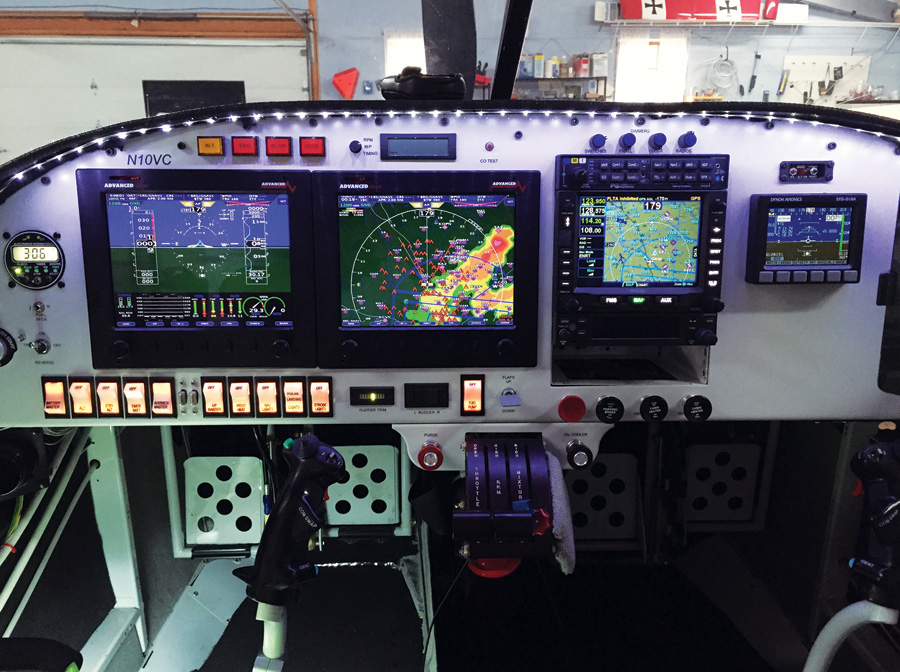 Our Experimental aircraft capabilities rival the airlines, as evidenced by the author’s RV-10 panel with all of the goodies.

Let’s start with the differences in decision-making as related to initiating the flight. In air carrier operations there are multiple people who can make the go/no-go decision, including the dispatcher, the captain, maintenance, and even ATC. And no amount of pressure from the family in the back will begin to impact the decision. The dispatcher has lots of data to work with, including colleagues,

continuous weather updates, and real-time data from other pilots/flights along the same route. As a GA pilot there are certainly multiple sources of weather data, which can be conflicting and confusing, and there aren’t always PIREPS when we need them the most. Unlike carriers who have multiple flights going in and out of the destination, we may be the only ones headed our way. And speaking of PIREPS, how relevant do you think a PIREP for moderate chop below 10,000 feet posted by a 757 is to a light, single-engine aircraft in IMC and without an autopilot? I am pretty sure it will feel a whole lot worse than moderate and most certainly would not be an enjoyable experience, passengers or no passengers.

From the outside, and especially while waiting at the passenger terminal gate for a delayed flight, it may look like the flight crew just shows up prior to departure and takes off. The reality is that there has been a whole cadre of people and resources being applied to that flight’s decision-making way ahead of the crew’s arrival. As a GA pilot we can somewhat stack the odds in our favor the same way by beginning to watch the weather some time ahead of our planned departure. Maybe even a week ahead during those times of the years when hurricanes or fast-moving fronts can wreak havoc.

Start by comparing the forecasts vs. the actuals, and use tools such as FlightAware to see the departures/arrivals from your destination airport. I usually store the AWOS telephone number in my cell phone for my destination and listen to it many times in the week prior to departure. It gives me some inkling as to prevailing winds and what runways might be used.

Speaking of pre-flight planning, maintenance can play a big part with regards to the outcome of the flight. Again, in air carrier ops there are a whole lot more resources being applied to the aircraft. As a GA pilot, and especially a builder/pilot, those requirements fall upon our shoulders. For this reason, I am a firm believer in a thorough post-flight as well as a pre-flight. I like to make sure that the aircraft is going to be ready when I need it next, not discover it’s not ready when we are planning to leave. One increasingly overlooked area is that of ensuring the databases for all of the avionics are current and will remain that way for the duration of the trip. This can be really impactful when heading out on a two-week trip that overlaps the monthly data cycles.

Having lived in a fly-in community for over 17 years, I have also learned a big axiom for travel: When I have to be somewhere I take the airlines, and when I can be somewhere I try to fly myself. Why? Two reasons: It doesn’t back me into a corner that will lead to bad decision-making, and second, there clearly is a capabilities difference in both the aircraft and the crews. As for the aircraft, on a typical 3-4 hour flight across the country, I may have to go through a frontal system. Depending on the time of year, that front might have thunderstorms, icing, or really low ceilings. In my single-engine airplane with its crew of one, and without deicing or auto-land capabilities, I am not going to have the same enjoyable flight as my airline friends will be having at 35,000 feet above the weather. Oh yes, I am also constantly chided by my airline neighbor friends of how risky it is for me to be flying single-engine IMC and at night. Interestingly enough, I have watched more than one of them retire and they now fly single engine IMC and at night! Go figure.

One area of capabilities in which I think Experimental aviation has the upper hand is the avionics. Mainly because we aren’t held to certification criteria, we are allowed to keep up with all of the rapid advances in this area. Just like PCs, airplanes that were built just a few years ago can have instrument panels that appear obsolete, even if they had state-of-the-art at the time. However, this is an area that we should all be cautious about, as sometimes the new stuff doesn’t always play nice together, and failure modes can be insidious and deadly. This is an area where I think backup systems are even more important than that second engine, and I especially believe that the backup system should be a different vendor and have some form of electrical backup capabilities. It helps to eliminate simultaneous exposure to the same software or hardware bug.

The last area I want to touch on this month is attitude. No, not the attitude of the aircraft, but the attitude of the pilot. Did you ever notice that the pilots with the right attitude seem to be having a lot more fun? Unless you are a test pilot, or seeking to set records, there’s really not a whole lot more left to prove in aviation. It’s about having fun. You can feel the positive vibes and fun factor on a commercial flight when the pilot and crew almost behave as if they were tour guides, pointing out sights along the way and other tidbits about the journey. And you can see it in the GA terminals by the demeanor of the passengers and crew when disembarking.

Unfortunately, not all pilots make use of the available resources, or exercise good decision-making. Sometimes it’s due to attitude, and sometimes it is due to unforeseen circumstances. Next month I will touch on some of the examples I have seen in my aviation journey. Until then, keep the fun factor going!

Building on a Budget

Scott Spangler - February 7, 2011
0
Building his VW-powered Zenith CH 701 taught Wayne Clagg a lot about the consequences of powerplant choices… and much more.

Amy Laboda - March 10, 2008
0
Is the mainstream medias portrayal of aviation incidents sensationalized or on target? Turns out they are right in some aspects, but lacking in others. Either way, the aviation accident rate illustrates that there's still room for improvement; by Amy Laboda.