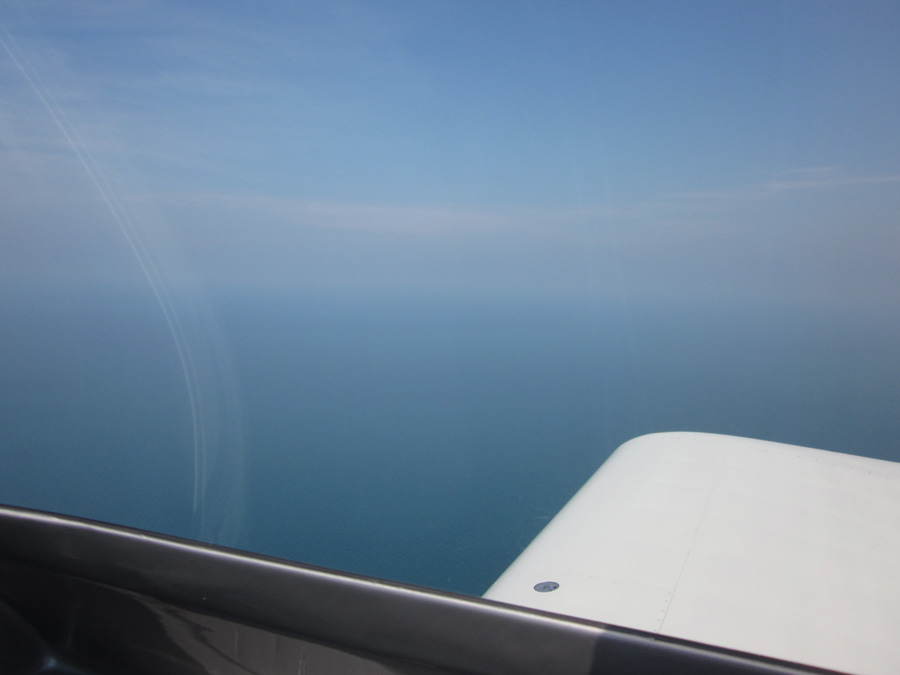 Here is the view captured by Dan Horton while attempting to cross Lake Michigan on the way to OSH. The view is actually better through the camera lens. Dan turned around!

Having just returned from AirVenture 2015, I thought I would share some thoughts while they are fresh in my mind. The trip up in the RV-10 was very pleasant as we did our usual flight at 10,000 feet to Gary, Indiana, for the first leg. We always use oxygen at or above 10,000 feet during the day and 5000 feet at night. It’s amazing how much more rested we feel when we land, and I am sure we are much more alert in the airplane. And even though the RV-10 could make it non-stop to OSH, it’s nice to take a break in order to be rested for the final leg. Also, there’s a really nice FBO, B. Coleman Aviation, at Gary/Chicago International Airport (KGYY) with really cheap prices and super friendly staff. The fun part of the next leg, if the weather cooperates, includes taking the scenic shoreline tour up past Chicago. I usually watch the weather forecasts and actual weather for about a week prior to the trip, and if there is any doubt about great VFR, I will reserve an IFR reservation slot. I did so this year again, and it was a good thing. While weather was marginal VFR due to ceilings with broken to scattered clouds, below the clouds it was typical July haze, and a flight across Lake Michigan without reference to instruments would have been very dicey. Fellow Kitplanes writer Dan Horton saw it firsthand and, discretion being the better part of valor, he turned around. The accompanying picture doesn’t really do justice to the actual view out the window, and I suspect it is due to some filtering by the camera. Suffice it to say there was no visible horizon while over the water. In Dan’s own words: “I swear, the Mark 1 eyeball saw none of that; it looked like the inside of a featureless green-blue ball.” 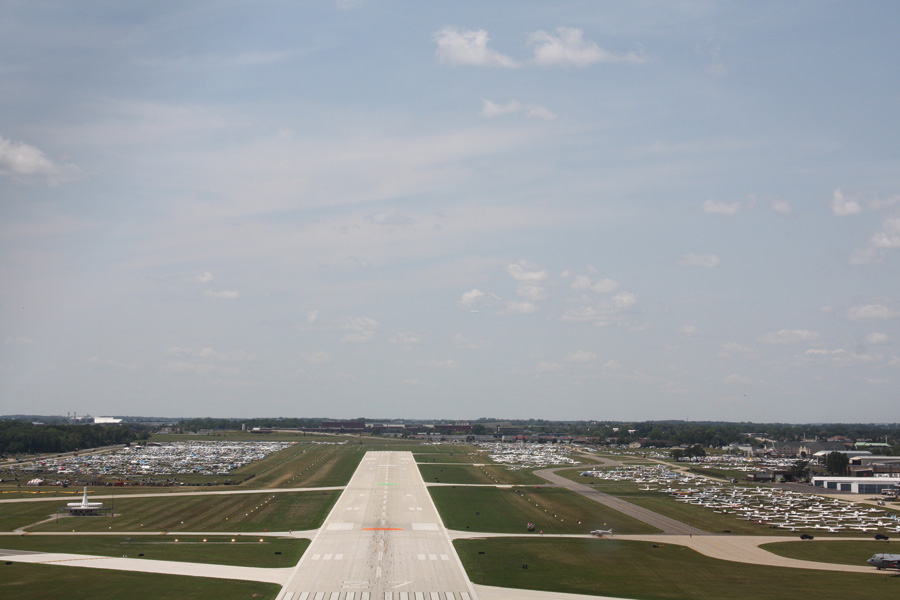 IFR approach to Runway 27. Cleared to land on the orange dot, and we know a whole new set of great memories will begin to unfold at AirVenture.

For those of you who have used the IFR reservation system, you know that you are assigned a 15-minute window in which to arrive. I’ve always prided myself on arriving within a minute or 2 of my scheduled time, but this year Chicago Approach threw a wrench into the game. We were held on the ground at Gary for almost 20 minutes, and once airborne and in cruise on our assigned routing, I could see that we were going to miss our slot by at least 10 minutes. I pushed the power up a little more than usual and started asking for routing changes and “direct to” intersections in order to shave some time off. Eventually Milwaukee Approach came on and said to not worry about my Oshkosh window. Great—pressure off! We now enjoyed the rest of the flight, culminating in an uneventful landing on the orange dot on Runway 27.

So here we were again, at the one event that has created so many fond memories since our first trip in 1981. Of course there is always the weather factor at Oshkosh. Those of you who have been there know what I mean. We’ve come to learn that there is going to be a surprise sometime. We just don’t know how much or when.

This year was no different. We landed Friday afternoon, and the Welcome Wagons were Johnny-on-the-spot to get us over to Camp Scholler. Aren’t those Welcome Wagons a great service? It’s also amazing how much gear the RV-10 will carry, as Carol and I barely had enough room to sit in the back of the Welcome Wagon once we loaded all of our stuff in it! Friday’s weather was very pleasant, and we retired to bed around 11 p.m. with a really great weather forecast and nothing showing on the radar in ForeFlight.

Around 5 a.m. I was reminded of a line from one of Bob Seger’s songs: “I woke last night to the sound of thunder. How far off, I sat and wondered.” Only I didn’t have to wonder how far off it was, as it was clearly pretty close. Huh? No mention of this in the forecast a few short hours ago. A quick peek outside to the west showed a pretty ugly, yet beautifully colored sky. In a few short minutes we had some pretty terrific winds that I thought were going to capsize the camper, and that was followed by almost 2-3 hours of rain. Here we were in muddy Camp Scholler again! The difference this year was seeing the quick reaction of all the volunteers with huge water-vacuum trucks taking away most of the large puddles that in the past had made a huge mess. By the time we came back that evening, there was hardly any sign of the storm that morning. From what we heard only a few airplanes were damaged. I think we all got away pretty easy with that one, although I am sure the owners of the damaged airplanes may feel differently. The rest of the week was absolutely wonderful weather wise! 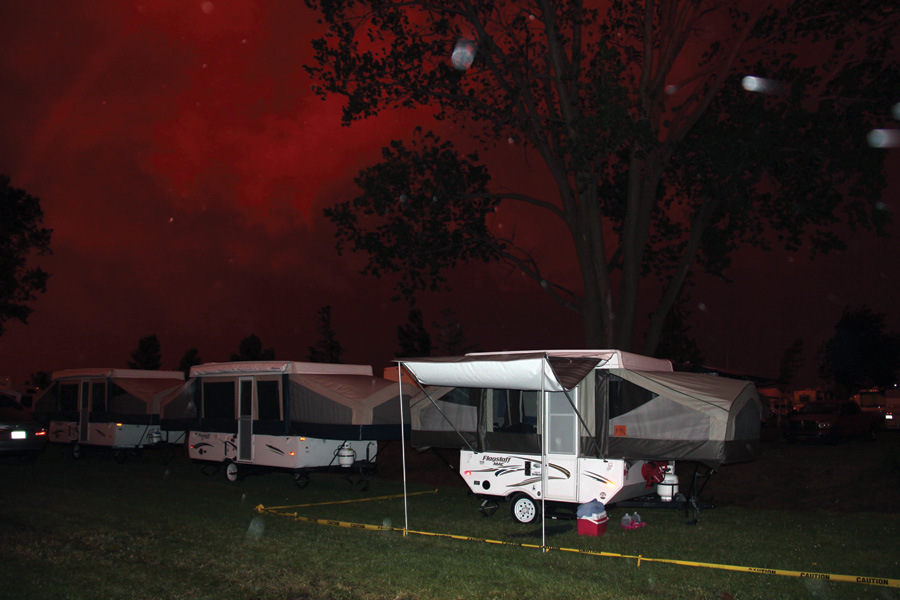 This was the view of the unforecast storm just before it hit with a vengeance. It was like an old friend just reminding us of Oshkosh’s potential for varying weather.

This Oshkosh was a little different for me. In past years it was my getaway, a time to really enjoy aviation and friends. This time I had some responsibilities, which included presenting a forum, speaking at the Van’s Aircraft banquet (what an honor!), spending time in the KITPLANES booth, and having our airplane on display for the Avidyne team. I was also invited to interview for the EAA Homebuilt Aircraft Council, a nice surprise and honor. By the time you read this, you may have already seen the announcement of the new members, of which I am one. How cool is that? I am starting to understand the axiom of passing the torch as we get older. I still remember my first Oshkosh and how overwhelmed I was, and realizing how much I had to learn. And now, too fast, it seems like it is time to help others learn.

Speaking of Oshkosh and overwhelming, I had a little of that same feeling this time as well. No doubt the leadership team at EAA has done a wonderful job of growing AirVenture into an immensely successful convention that covers just about every facet of aviation. It truly is amazing, and one only has to go out to the flight line and climb up one of the photo platforms and slowly do a 360 turn. It has a wow factor beyond belief.

The focus on the youth aviation programs is also wonderful, especially seeing such great people as Dick VanGrunsven and other aviation icons being so actively involved.

However, looking past that, I also think it can be confusing for new people just getting into aviation. Believe me, I love this place, and having been so many times, I kind of know where to look for things. But I can’t help but wonder if there is an opportunity to arrange the flight line in a way that would showcase all of the aviation opportunities available to everyone, much like a walk through a museum or nature center. As an example, starting at show center, aviation could be split left and right into two categories: “you build them and you fly them,” and “we build them and you fly them.”

Each side could start from simplest to the most complex, such as Light Sport to Epics on the custom-built side, and Light Sport to jets on the certified side. And just like at museums, there could be signage, or even apps for the iPhone, that give you more information about the aircraft, as well as pointing you to the location of the vendor on the field. No sales pressure should be allowed on the flight line. I know it would take some work and organization, but I think it would be really cool for an aspiring aviator to see and understand all of the opportunities available to them. 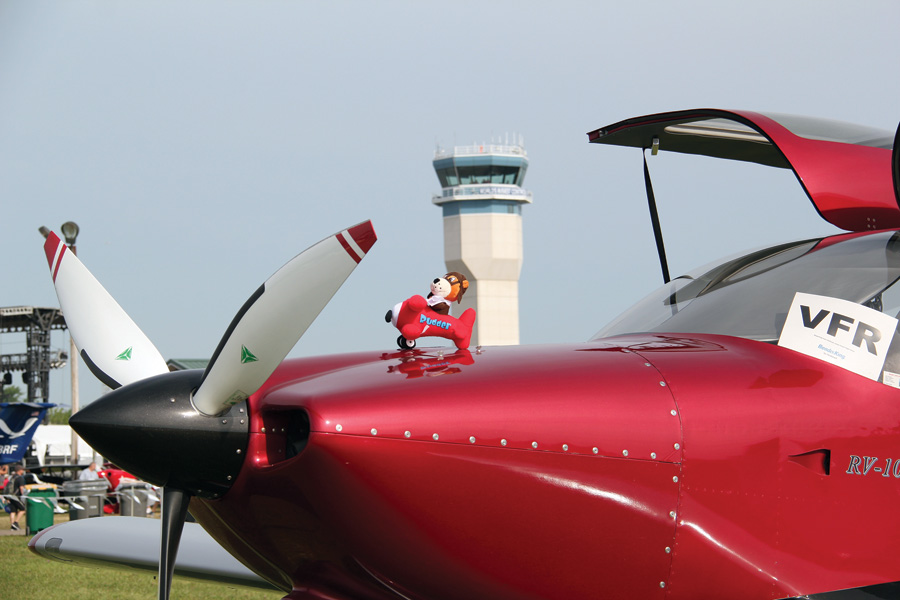 Speaking of young, aspiring aviators, the funniest thing happened at lunch right after we returned from Oshkosh. We flew the Stearman to Peach State Airport (GA2), which has a wonderful restaurant right on the field, a grass strip. When the weather cooperates we really enjoy eating outside and watching the other airplanes, as well as seeing and meeting folks interested in aviation. It’s also one of those places where you still see parents bringing their kids to the airport to see airplanes.

While waiting for our food I noticed a young mother with two small children, a boy and a girl. The young boy was clearly excited about airplanes. As I often do when I see such enthusiasm, I asked the mom if she would like to get a picture of her children on the wing of the Stear-man. This time the kids answered before she did, so I put them up on the wing. I couldn’t help but notice the young boy’s fixation with the cockpit, so I asked if he wanted to get in. Silly question, huh?

Once seated he did the usual playing with the controls, but what he said next completely blew me away. He looked at his mom and said, “Mom, I am going to work real hard when I get older so I can buy you an airplane like this.” Did I tell you he was 5 years old? Wow, wouldn’t you love to watch this kid chase his dreams? I bet he is going to have lots of fun. I hope he makes it to AirVenture someday and sees all of the choices available to him.

We had a great week at AirVenture 2015 and hope you did, too!