STOL (Short Take Off and Landing) capability can make an airplane nearly independent of airports. To achieve this, it must be able to take off and land in similarly short distances. 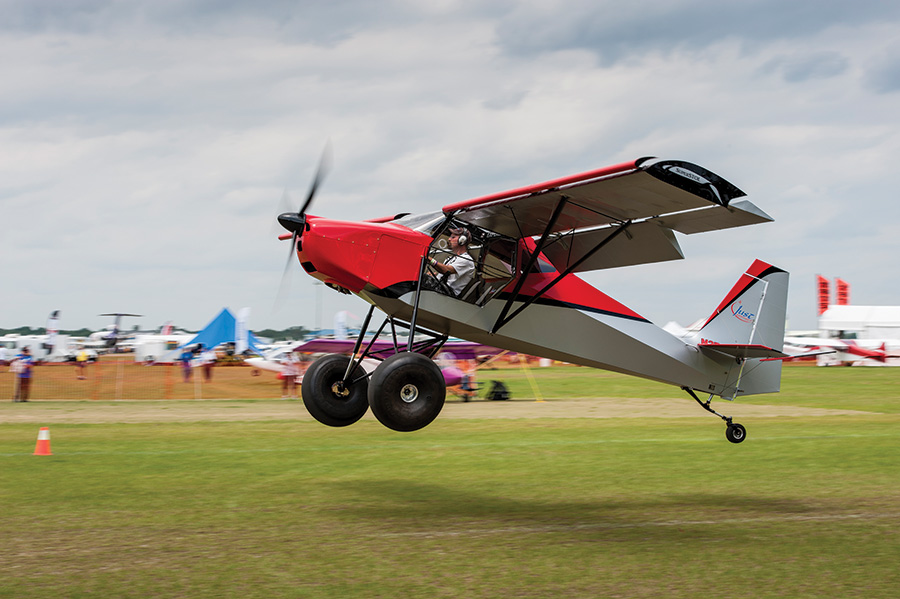 It takes more than big tires to make your airplane STOL-ish. High-lift devices and plenty of power will help.

It is not particularly useful to be able to take off very short if it took a lot of runway to land there in the first place. It’s even worse to successfully land short and then not be able to take off safely. The latter might be useful in an emergency, but it’s not a normal mode of operation.

The distance required to achieve liftoff speed is inversely proportional to the acceleration of the airplane. Double acceleration and you halve the takeoff roll. Acceleration is determined by the mass of the airplane and the excess thrust available from the propulsion system over and above that required to overcome aerodynamic drag and rolling friction. A high power-to-weight ratio is one of the keys to short takeoff.

The prop is the other piece of the equation. The propeller converts the power delivered by the engine into thrust. At low airspeed a large-diameter, low-pitched prop will generate more thrust per horsepower than a smaller-diameter prop with higher pitch.

A good example of the high-diameter, low-pitch approach is the combination of prop speed reduction units and large propellers used on modern ultralights. Ultralights also highlight a major issue for airplanes that have to go anywhere after takeoff. Using a fixed-pitch prop optimized for low-speed acceleration is like being stuck in first gear. The initial acceleration is great, but the prop will severely limit top speed. In cruise, the airplane needs a prop with more pitch to absorb the power of the engine at the higher airspeed without over-revving.

If the cruise performance of a pure takeoff-optimized fixed-pitch prop is unacceptable, the designer has two choices. The first is to use a compromise fixed-pitch prop that has more pitch and less diameter than optimum for takeoff and seek an acceptable balance between takeoff acceleration and cruise.

The second option is to make the inevitable “money for performance” trade and use a variable-pitch or constant-speed propeller.

To see how powerful this squared function is, consider an airplane that lifts off at 60 knots and has a 1000-foot takeoff roll. Reducing liftoff speed to 50 knots reduces the takeoff roll to 695 feet. If liftoff speed could get down to 40 knots, the roll would be 444 feet, less than half the distance needed to get to 60.

This speed-squared effect is the primary reason why ultralights and airplanes with very low wing loading can take off in such remarkably short distances.

Minimum liftoff speed is determined by stall speed. To fly away safely, the airplane must have some margin above stall speed when it lifts off.

Stall speed is determined by the wing loading of the airplane and the maximum lift coefficient of the wing.

Low wing loading is the simple way to minimize stall speed. Early airplanes were all STOL airplanes. They had to be because there were no airports. Airfields were small grassy fields with no defined runways.

When the airplane first went to war, the aerial battles of WW-I occurred over a relatively stationary front in the trench-dominated ground war. Fighter designers of the time tended to prize maneuverability over speed. Getting short takeoff and landing performance was relatively easy under these conditions. The airplanes had lots of wing area. The wing loading of a typical WW-I fighter was between six and eight pounds per square foot—about equal to a Piper J-3 Cub. All that wing area gave them the slow takeoff and landing speed required, but ensured that they were slow all the time.

Early airliners followed essentially the same design philosophy. The British Handley Page H.P. 42 Hannibal and the American Curtiss Condor biplane airliners both were capable of very short takeoff and landing, but were so slow that it was almost faster to take the train.

Low wing loading keeps stall speed down, but also adds drag and hurts ride quality in turbulence. To increase wing loading and improve up-and-away performance while retaining STOL capability, we need to increase the maximum lift coefficient of the wing.

Effective flaps and, if necessary, leading-edge slats or other devices can greatly increase the maximum lift available from each square foot of wing. This allows the wing loading to increase at constant stall speed. The higher the wing loading, the more sophisticated a high-lift system is needed. 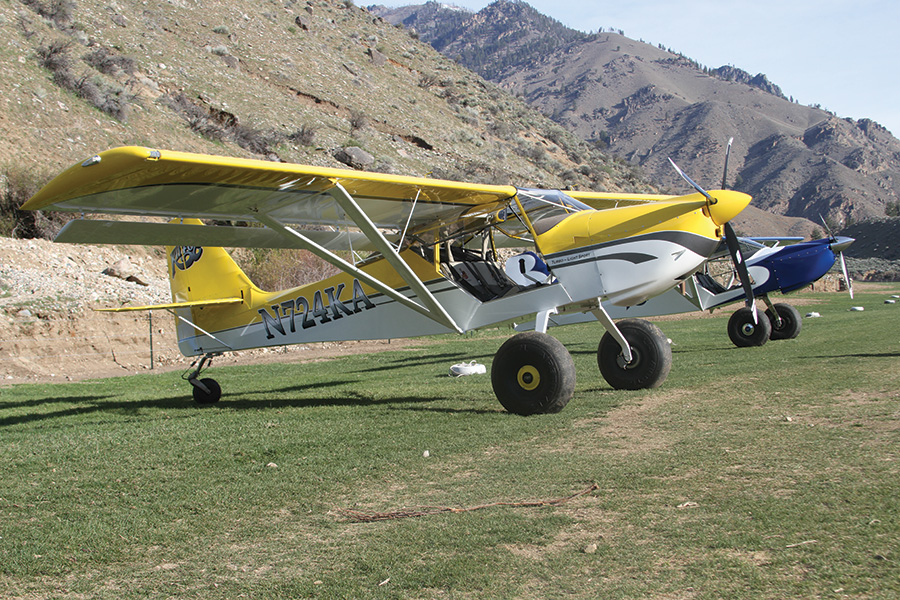 STOL performance is critical when operating in and out of secluded mountain airstrips.

Small landing sites are, more often than not, surrounded by large organic obstacles (trees). Once the airplane lifts off, it must be able to climb over whatever happens to be in the way. The takeoff is not complete until the airplane clears any obstacles.

For a STOL airplane, a safe positive rate of climb is not enough. During initial climb of a STOL airplane, climb angle is more important than climb rate. The goal is to gain altitude in minimum distance traveled over the ground.

Most of a plane’s drag at liftoff speeds is induced drag. Induced drag is inversely proportional to airspeed squared, so slowing an airplane dramatically increases drag. A 10% reduction in airspeed increases induced drag 20%. This is even more important for STOL airplanes than for others. During a low-speed liftoff, the airplane will be on the back side of the power curve when it breaks ground. Induced drag will be very high, and the airplane will need a lot of power to climb away successfully.

The climb power problem is exacerbated if the airplane has a relatively small wing and is depending on a high-lift system to keep the wing from stalling. Powerful flaps increase maximum lift, but they also generate a lot of parasite drag. The smaller wing means that the airplane will have a higher span loading, which increases induced drag. Increasing aspect ratio to keep the span loading down with a smaller wing area can help alleviate this problem, but at a penalty in increased wing weight.

Like the takeoff, the landing maneuver has two segments: the final approach over the obstacle, and the ground roll after touch down. The keys to achieving the short landing part of STOL are slow approach speed and the ability to fly a steep approach. While a big engine and lots of thrust can haul an airplane out of a short field, getting down in the first place is almost completely dependent on the performance of the wing and high-lift system.

During the final approach to landing, the airplane must clear an obstacle and then descend to the ground. For a STOL mission, it is desirable to have the final approach be both slow and steep. The steep approach is needed because small landing spots are most often surrounded by big obstacles like trees.

The goal is to minimize the total distance from the obstacle to the point where the airplane comes to rest on the ground. It does little good to be able to stop short after touchdown if you need a long, clear area for your approach, and flying through the trees is not recommended procedure.

The need for extra drag to steepen the approach appeared along with the reduction in cruise drag that occurred when monoplanes replaced biplanes. If you read contemporary pilot reports on early clean monoplanes, you will often find complaints about shallow landing approaches and difficulty touching down precisely.

The primary source of extra drag to steepen the approach slope is the flaps. Most of the stall speed reduction from flaps comes from the first 20 to 30 degrees of flap deflection. Greater deflections are used primarily to add drag to get a steeper approach. High drag flaps are good for landing approach, but can be a problem in a go-around.

During a missed approach, the engine must have enough power to arrest the descent and then establish a positive rate of climb, starting with the airplane in the approach configuration at approach airspeed. For lower powered airplanes this can be a problem. One example from the world of certified airplanes is the venerable Cessna 150/152. The original 150 had flaps that could deflect 40 degrees. At full flap this produced a very steep descent, and allowed quite short landings. Unfortunately, it also meant that a go-around at full gross weight was a pretty marginal exercise, particularly if it was a warm day. Later 150s, and all 152s, had the last 10 degrees of flap deflection removed, giving a maximum deflection of 30 degrees.

A second good source of drag for steep approaches is a set of spoilers. Spoilers have two advantages: First, they can be retracted quickly to clean up the airplane for a go-around. Second, they can be deployed fully on the ground to dump lift after touchdown to aid braking.

After the airplane touches down it must stop. For short landings, a slow touchdown speed is a must. The same speed squared effect is present on braking as it is during the takeoff acceleration. The distance required to stop varies as the square of the touchdown speed.

The amount of braking force available to stop the airplane after touchdown is relatively limited, since it is directly proportional to the amount of weight on the wheels. After touchdown, it is desirable to transfer load from the wings to the wheels as quickly as possible. Landings with little or no flare help accomplish this. Rapid retraction of the flaps after touchdown also helps braking action. At least one STOL airplane has a flap quick-retract button on the stick to allow the pilot to dump lift without releasing the primary controls. Using spoilers to reduce lift after touchdown can also help. It is standard practice on sailplanes and airliners, and would work well in STOL applications.

Like almost everything else in aviation, STOL airplanes are a bit of a compromise. But for pilots who regularly operate on short, unimproved strips surrounded by tall obstacles, they can be the next best thing to a helicopter.

Marc Cook - May 16, 2012
0
Marc Cook considers the relevance of airworthiness directives for homebuilders and reflects on what he learned about the current homebuilt market at Sun ’n Fun.