I promised I would cover condition inspections in a future article, and having just completed a number of condition inspections for some non-builder owners, I can’t wait any longer. Some of what I have seen lately has been really interesting, and I’m going to share it with you, hoping that you will take a look at some of these areas on your aircraft.

The condition inspection should be to the same detail as the original airworthiness inspection, except for the mountain of paperwork, of course! The objective is certainly the same: ensuring the aircraft is in a condition for safe operation. It is required to be performed within the preceding 12 months. So why don’t we call it an annual inspection like in the certified world? Since we could debate that for a long time, I defer to Shakespeare’s comment: “That which we call a rose by any other name would smell as sweet.” Again, our goal is to determine the “condition” of the aircraft, and the way to do that is to inspect the aircraft in accordance with the scope and detail of FAR Part 43, Appendix D.

Who Can Perform the Inspection?

There are three ways to accomplish this inspection: owner/builder performed, owner assisted, or shop performed. I know I enjoy performing the non-builder inspections when the owner is involved, especially for the first condition inspection after the initial purchase. It really gives the new owner a detailed look into the aircraft and helps them understand it better. (In a future article I plan to write about systems knowledge). It is also a great time to understand the wear items on a particular aircraft. As much as we would like to think that the 8000 flying Van’s aircraft are all alike, they are not. Every single one of them is individually built, and even multiple aircraft built by the same individual have differences. For those of you who are non-builder owners, I highly recommend that you find an A&P that is familiar with your type of aircraft. 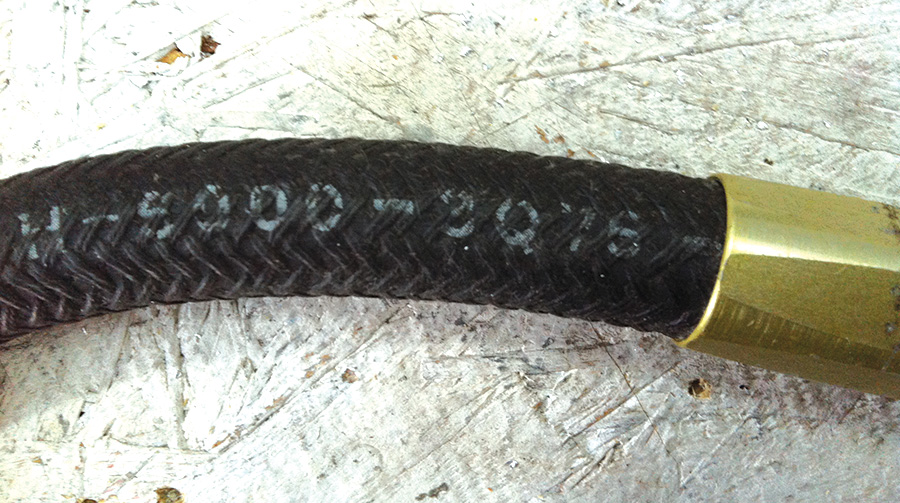 Unless hoses are the newer Aeroquip Teflon-lined hoses, they should be changed at least every 8–10 years. This one from a used engine is date-stamped 3Q76!

An aircraft undergoing a condition inspection will probably not look much different than one undergoing an initial airworthiness inspection, meaning all exterior panels should be open or off, the cowling, wheelpants (if installed), and even the spinner is off, and the interior is removed enough so that the entire control system can be inspected. I would certainly recommend using a checklist, and there are plenty of examples online if you don’t have one.

Now the fun begins. For me, it’s like being on an egg hunt and seeing what I can find. I first review the logbooks to see what insights the history might yield, such as details to maintenance performed, what’s changed (any new equipment installed), service bulletin compliance, and is there an oil analysis program. Then I begin the inspection, which for me is to physically touch everything that moves (controls, jam nuts, governors, wheels, etc.), and look and listen for any anomalies.

Some things are not subjective here, such as really low cylinder compression, metal in the filter or screen, and hoses that are 38 years old. Yes, I recently performed an inspection on an aircraft on which the hoses to and from the oil cooler were date-stamped 3Q76! Seeing as the aircraft was built in 1998, I’d be willing to bet they were installed with the engine as removed from another aircraft. Unless hoses are the newer Aeroquip Teflon-lined hoses, 8–10 years should be an absolute max.

By the way, further inspection of this particular engine revealed some interesting data. It was an original O-320 (no dash number!), and two cylinders had been replaced due to leaking exhaust valves. A compression check showed 20/80 on a cylinder that had not yet been replaced, glitter-like particles in the oil, and gobs of metal in the oil filter. After some discussion, I ended up completely replacing everything forward of the firewall, and the new owner is quite pleased. Although the airframe was aged, it was meticulously constructed by a repeat show-quality builder and, with the new engine and accessories, it now has a new lease on life! 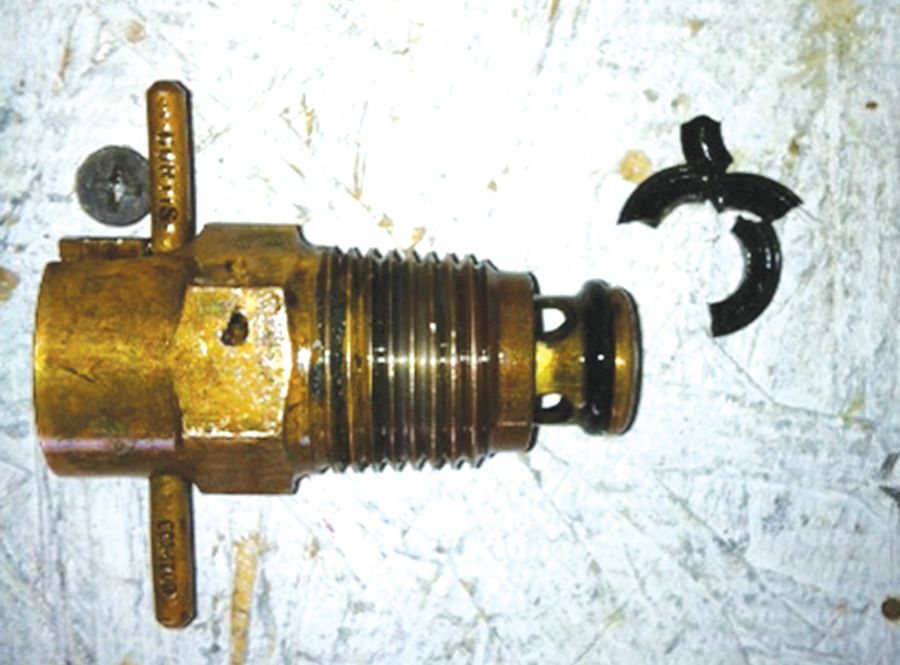 Sometimes I discover the root cause of other problems. I had one RV-6 that needed the belly skin replaced due to an off-runway excursion during a crosswind landing. The subsequent entanglement with a runway light had left an unsightly crease down the belly skin. While performing the rest of the inspection, I noticed that the rudder would move from stop to stop without engaging the tailwheel steering arm. The pin and linkage arm were worn beyond limits, effectively leaving the pilot without tailwheel steering unless there was adequate airflow across the rudder. The reaction to the off-runway excursion was an immediate “chop the power” which actually compounded the situation. The pilot was now just along for the ride. I know some of you are thinking it should have been caught on the preflight, and I agree. But many non-builders unfortunately don’t really understand how it all works, and if it was sold in that condition, one could assume it was normal operation. Sometimes these wear items just slowly reach their limits, and one day it just doesn’t start due to worn plugs, or unfortunately, something worse like no tail-wheel steering when it is really needed.

Here are some other common areas to be looked at on condition inspections:

• Gascolator screens, carburetor/fuel servo inlet screens, and fuel filters. Sometimes the fuel filters are tucked away and the non-builder isn’t even aware of them. Gascolators have screens that need to be checked, and they aren’t always easy to get out. I have seen screens that are 90% blocked and most likely would not have allowed enough fuel flow for full power.

• Loose jam nuts on control linkages and rod-end bearings. This has become such a problem on RVs that cracking is occurring on elevator spars, and Van’s has issued a Service Bulletin to address it.

• Service Bulletins not complied with. I know there are some who will argue all day long as to whether we need to comply with them in the Experimental world, but suffice it to say that I do require them. If someone with enough view and knowledge of 8000 flying aircraft has decided that a particular item should be addressed, I will defer to their judgment. And I assure you I am not a “follower.” Remember: condition for safe operation.

• Missing cotter keys and or safety wire. I really don’t understand how they “fall out.” I really think someone was probably doing some maintenance and forgot to reinstall the cotter key/safety wire when they finished.

• Wheelpant brackets really require some extra scrutiny, especially for aircraft that are routinely operated off of grass or unimproved runways.

• Most oil quick-drains have O-rings in them that if not changed regularly will seep and cause a mess in the engine compartment.

I also ask the owner to bring a list of squawk items, which sometimes have some interesting problems. Egg hunt, remember? I had one RV-10 recently that the customer complained was eating batteries. He was on his third battery in two years. The symptoms were that it would start OK if used weekly, but would require a jump start if not flown for 2–3 weeks. Sure sounded like a parasitic drain to me, and sure enough, an amp meter yielded 40 mA of current drain from the battery with the master switch off. It took a little while to find it, but it turns out the new 406 MHz ELTs require a battery connection, presumably for the circuit board in them that receives GPS information from the aircraft. And guess what? The current draw is right around 40 mA! However, it should be on the cold side of the battery contactor. When queried, the owner realized that this problem did start when the ELT was installed a couple of years ago. Remember to check for changes. 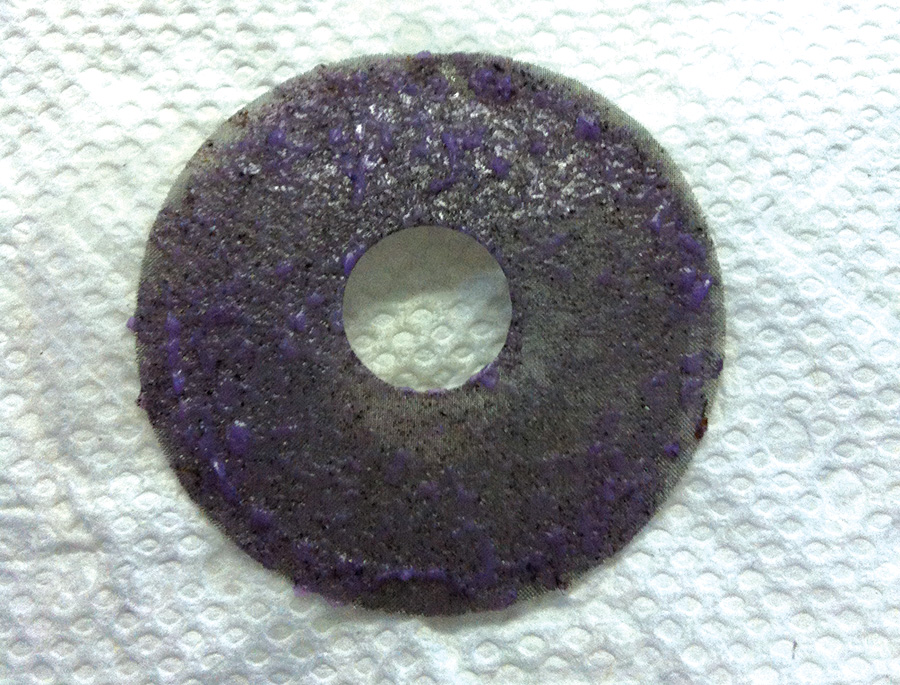 Here is a gascolator screen found to be almost 90% blocked during a condition inspection.

Condition inspections have one other thing in common with the initial airworthiness inspection, and that is the paperwork. Since we started with the paperwork, we will end with it. The special airworthiness certificate specifically states that the operating limitations are a part of the certificate. They must be carried in the airplane at all times. I try to help in this area by reminding everyone that a modified AROW mnemonic, which we memorized when learning to fly, is still applicable:

The condition inspection gets closed out with a logbook entry stating that the aircraft is in a condition for safe operation. Most of the newer operating limitations actually have the recommended verbiage.

And now that the inspection is completed we’re back in fun-flying mode!