Some years ago, I was ground crew for a friend competing in the Sport class at the Reno air races. It was the team’s first year, and we arrived at Reno with a brand-new airplane that had just flown off its test hours. Walking around the pit area, we immediately noticed that our competitor’s airplanes had clear plastic tape all over them. Every gap, joint, and hinge was taped. We did not have time to tape up our airplane before our first race, so we flew the first heat with the airplane as it was when we arrived. That evening, we set about taping up our airplane. As we were doing so, one of our competitors came by. Seeing us hard at work he said, “You don’t have to do that-it’s fast enough already.” We just smiled and kept taping. 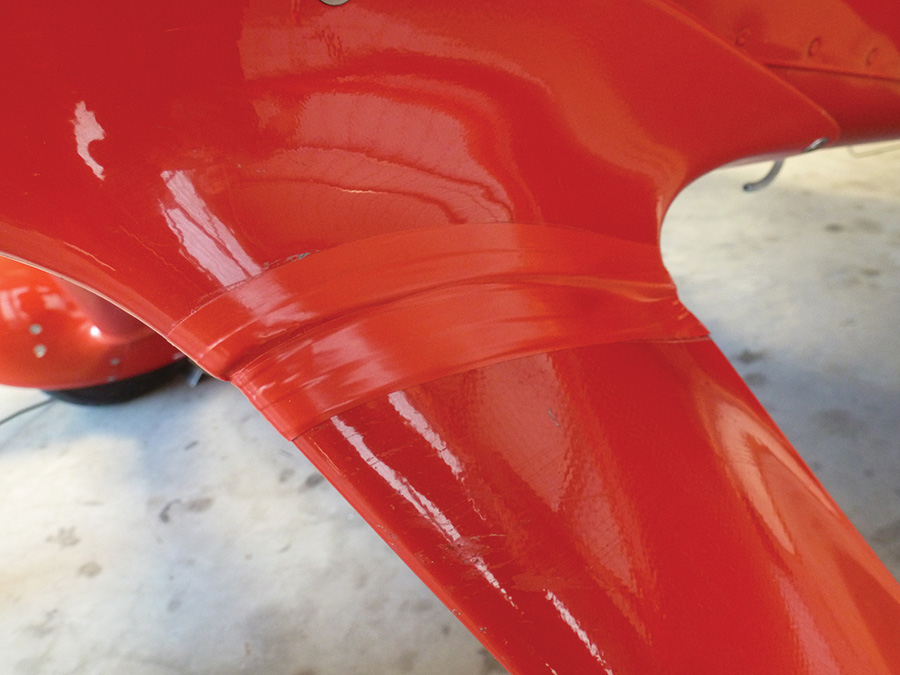 Taping the gaps on an RV gear leg fairing gives an aerodynamic seal while still allowing flexing. If it goes faster-so much the better.

The next morning, when the airplane headed out for its next race, the only gap that was not taped was at the base of the pilot’s canopy. For safety reasons, our pilot would not agree to us taping him into the airplane. It paid off. Our heat race speed increased by 6 mph. That speed increase corresponded to about a 7% reduction in the drag of the airplane. It also was very important to our overall success. The team ended up placing second in the Sport class Silver race. Without the 6 mph “tape” increment, we would have finished near the back of the field.

As this experience illustrates, using tape to seal gaps and leaks on an airplane can have a significant effect on drag and performance.

One of the biggest contributors to unexpected drag in light airplanes is the presence of gaps in the skin that allow air to leak through and disrupt the airflow over the airplane. Gaps are a problem wherever parts of the airplane, particularly moveable parts, join. These areas include control surface hinge lines and ends, wing and tail attach points, and doors of all sorts.

A lifting wing has lower pressure on its upper surface than on its lower surface. If an aileron is cut into the wing, there will normally be a small gap between the aileron and the wing at the hinge. Since the pressure on the top side of this gap is lower than the pressure on the lower side, air will flow through the gap, driven by the pressure differential.

The greatest pressure differential across a control surface is at the hinge line. If there is a gap at the hinge line, air can leak between the low-pressure zone and the high-pressure zone. The leak reduces pressure difference between the top and bottom, decreasing the net force caused by deflecting the surface. If the air leaking through the gap causes the flow to separate and stall the control surface, the loss of effectiveness is even greater.

Gaps similar to the gaps formed by control surfaces can exist between a retracted flap and the fixed portion of the wing.

Some types of controls and flaps have simple enough kinematics that the hinge line can be sealed with tape. This is straightforward for piano-hinged surfaces, but with one caveat. Always place the tape over the lower side of the hinge, inside the cove between the aileron and the wing. The higher pressure inside the cove will tend to keep the tape stuck down, while tape placed on the upper surface is likely to be peeled off by the outer airflow and the pressure difference between the top and bottom of the wing forcing it up.

It’s also important to make sure that if the tape peels away partially, it will not act as a spoiler and disrupt the airflow.

If doors or canopies do not fit their frames snugly, gaps will form, which will allow air to leak around the edges of the door. This can cause the inside of the airplane to become quite noisy, drafty, or even wet if the airplane is flying in rain. In addition, this air leakage will cause drag.

An air leak not only disturbs the airflow right at the gap, but causes turbulence downstream of the air leak. This increases the skin friction drag of the entire area of skin downstream of the gap. This turbulence can also cause premature flow separation, which, if it occurs, will greatly increase drag. In general it is a good idea to seal all openings in the airplane’s skin as well as possible. If this cannot be done then the opening should be designed to direct the leaking air downstream, parallel to the outside airflow.

Tape can be used to seal the hinge lines of simply hinged doors, or the hinge line of a side-opening canopy. As I mentioned with my racing experience, taping canopies closed with people inside the airplane may reduce drag, but it is a very bad idea.

Gaps at Wing or Tail Junctions

Many airplanes have flying surfaces which are removable, or have manufacturing breaks in them. This can lead to the wing or tail having a chordwise gap where it joins the fuselage, or other wing panels. A full-chord gap can have surprisingly large and undesirable effects on both the stability and drag of the airplane.

A chordwise gap can increase both the parasite drag and the induced drag of the flying surface. The air leakage through the gap increases the parasite drag of the wing or tail the same way a control-surface hinge gap does. The leaking air disturbs the airflow over the area of the gap and causes drag-producing turbulence. The gap can also cause the induced drag to increase by reducing the effective aspect ratio of the surface. A wing with a chordwise cut through it tends to behave more like two shorter-span wings flying in close formation. The ends of the gap act like wingtips and shed their own tip vortices. If an airplane has significant gaps at the wingroots, it effectively has two low-aspect-ratio wings instead of one higher-aspect-ratio wing. This will cause the wing to have a very low span efficiency and high induced drag. The gap size required to cause this effect is relatively small, and it is much more important to seal chordwise junction gaps than any other type of gap on the airplane.

There are some airplanes where the geometry of the wing or tail junctions are complex, or the tail has to move relative to the fuselage. In these cases, a specially-built seal is needed. For other situations, such as the simple joint between a fixed wing center section and removable outer panels that is common on homebuilts, simply taping the joint top and bottom can produce a significant aerodynamic benefit.

Engine cowlings are another area where there is a large air-pressure difference across the skin. Cooling air flows into the inlets, and is ram-pressurized in the upper plenum. This ram pressure forces the air over the cylinder to absorb heat. Any leak in the cowling skin that allows some of this ram pressure to bleed off increases the amount of air that must be captured by the inlets to adequately cool the engine. Leaky cowlings hurt cooling and increase drag.

Cowlings typically have a joint at the rear where the cowl joins the fuselage, and some sort of joint splitting the cowl into an upper and lower portion. Both of these can leak. Taping all of the cowling joints, except for those that need to be routinely opened to preflight the engine can improve cooling and reduce drag.

When taping joints and gaps on an airplane, it is critical to make sure that any conceivable failure of the tape will not cause a dangerous situation. Here are a few things to look out for:

Make sure the tape does not interfere with the normal operation of the controls or other aircraft systems.

Avoid situations where a partial tape failure can cause the tape to act like a spoiler and disrupt the airflow. This is particularly critical on wings and control surfaces.

Make sure the tape will not end up in an engine air intake, or cooling air inlet if it peels off. Clogging the engine air intake can lead to an undesirable sudden silence, and anything that goes into the cooling inlet will come in contact with hot cylinders and become a fire hazard.

Finally, adding tape to a homebuilt, or Experimental airplane is at the discretion of the owner of the airplane. Any alteration of a certified airplane, including adding tape to its surfaces, may be considered to be a violation of the type certificate by the FAA.

Paul Dye - November 16, 2012
0
EFISes provide a tremendous amount of information and extend the capabilities of todays homebuilt aircraft, but only if you take the time to learn how to use them properly.