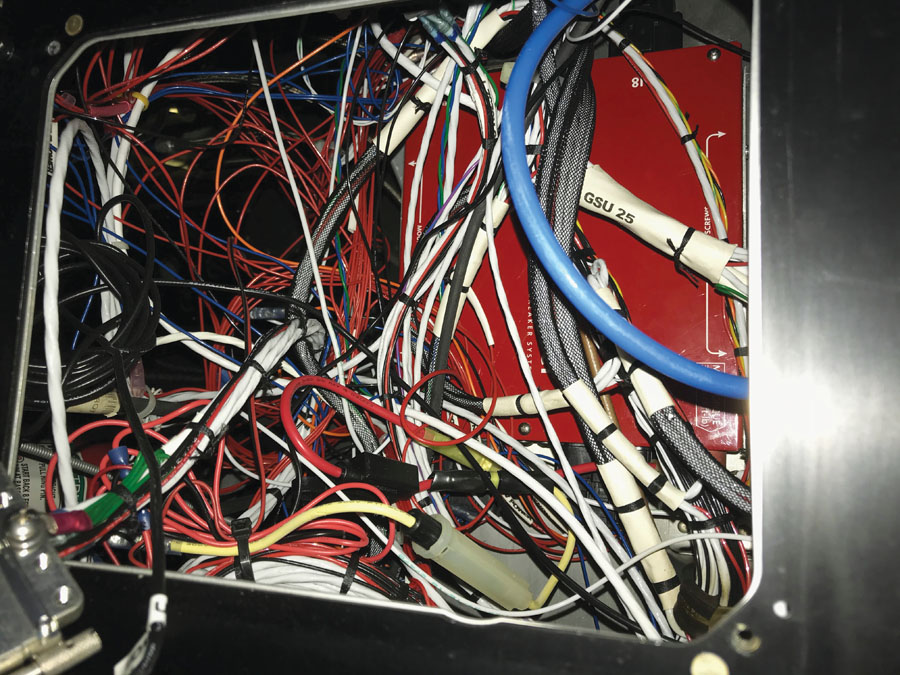 This speaks for itself and was done on a “build-for-hire” airplane. If you haven’t done wiring before, there is more to it than just connecting the wires. Proper support and routing will make for a reliable airplane, as well as ease of maintenance.

I’ve been writing a lot about maintenance lately, in part due to the things I see while doing prebuy inspections. For those of you who are maintaining an airplane for the first time, I hope you find these columns worthwhile. I know that as good as the kits have become in the last decade, there’s still a lot to be desired when it comes to care and feeding once they are finished.

There are other areas that could use some focus as well, and they have to do with what I call “bad practices” during the building process. Some of these can actually affect the reliability and maintainability of the aircraft once it is flying. I have even seen these bad practices in aircraft that were built by “repeat offenders” or “guns for hire” builders. I am not here to judge whether some of these practices are done to cut corners or just out of plain ignorance. It could even be that no one pointed out the bad practice on the first airplane, and so it just continues to propagate on subsequent projects. However, the impact is the same. 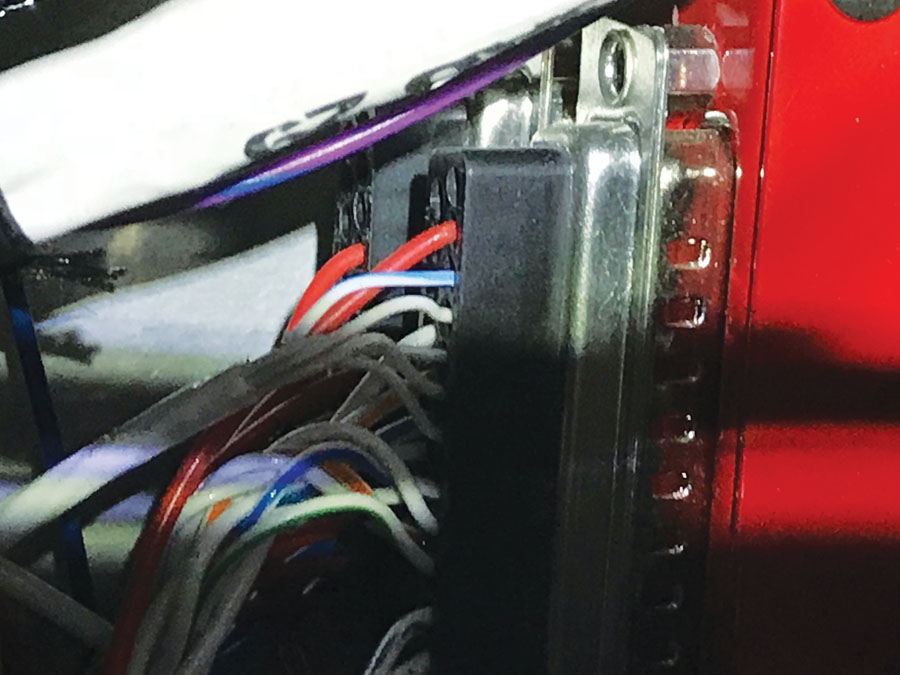 D connectors require a backshell that provides strain relief for the wiring, as well as screws for fastening them to the device. Do not leave them off like pictured here!

In my 40+ years of being around aircraft, both certified and amateur-built, it seems to me that electrical systems have never been a strongpoint of A&Ps or builders of E/A-B aircraft. I remember when I was studying for my own A&P license there wasn’t much material on electrical systems. Suffice it to say that there was a time when electrical systems weren’t all that complicated in our airplanes. Many of the instruments were direct reading gauges, such as oil and fuel pressure, tachometer, vacuum, and pitot-static systems. No electricity was required for much of anything except lights and radios, if so equipped. Some airplanes didn’t even have an electrical system, and many of those airplanes are still flying today. My Stearman is an example.

While we are required to build 51% of our aircraft as amateur builders, the FAA does allow us to seek help in certain areas that are complicated, such as the engine and the avionics. That’s really good news, especially given how complicated the avionics have become. As a matter of fact, one of the most often-asked questions I hear from prospective builders is, “How can I get help on the instrument panel?” As many of you know, there is now a whole cottage industry of providers who will design and build your panel for you, even calling it “plug and play.” It’s a great relief for those who are intimidated by wiring. 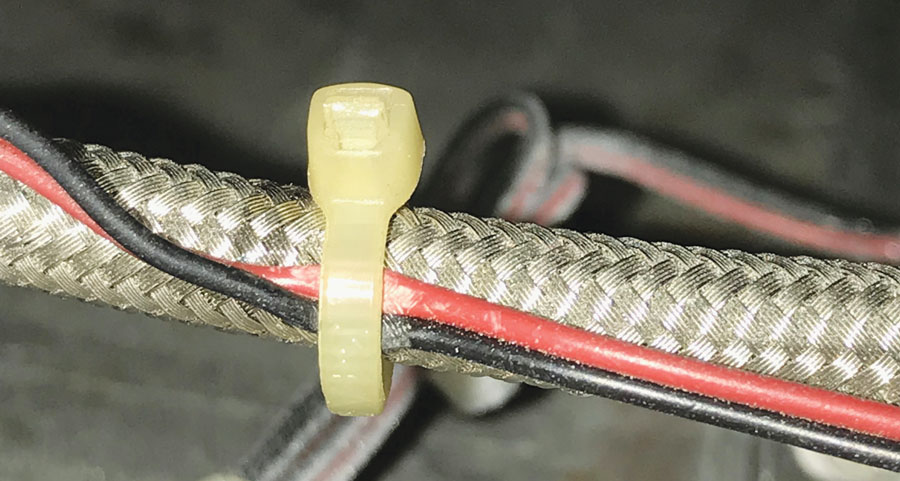 Metal sleeved hoses usually have a good path to ground. Cable tying power leads directly to them without some kind of insulation will eventually lead to an electrical short. You can see the distortion of the insulation on the wires here. It’s known as “cold-flowing.”

However, much like taking time to learn some of the necessary skills to build the airplane in the first place, whether it is sheet metal, fabric, or composite, a builder should take the time to learn some basic wiring skills. Most of these panels are not quite as plug and play as you would think, or hope, for that matter. Sure, most of the avionics get prewired and sometimes tested by the panel provider, but there is still a myriad of wires in the airplane that need to be connected, such as ignition systems, lights, pumps, etc. Some of them have their own nuances, such as using shielded wire for magnetos and knowing where and when to ground the shield.

Not using proper support for wire bundles is another common bad practice. Take a look at the picture of the wiring to a VPX system I discovered in an RV-10 that was built for hire. Not only is the wiring a rat’s nest, but also the 25-pin connectors at the VPX did not even have backshells on them and were not fastened to the main box! They disconnected from the VPX with only a slight tug on them. A good bump in some rough turbulence could have the whole panel going blank at the worst possible time! 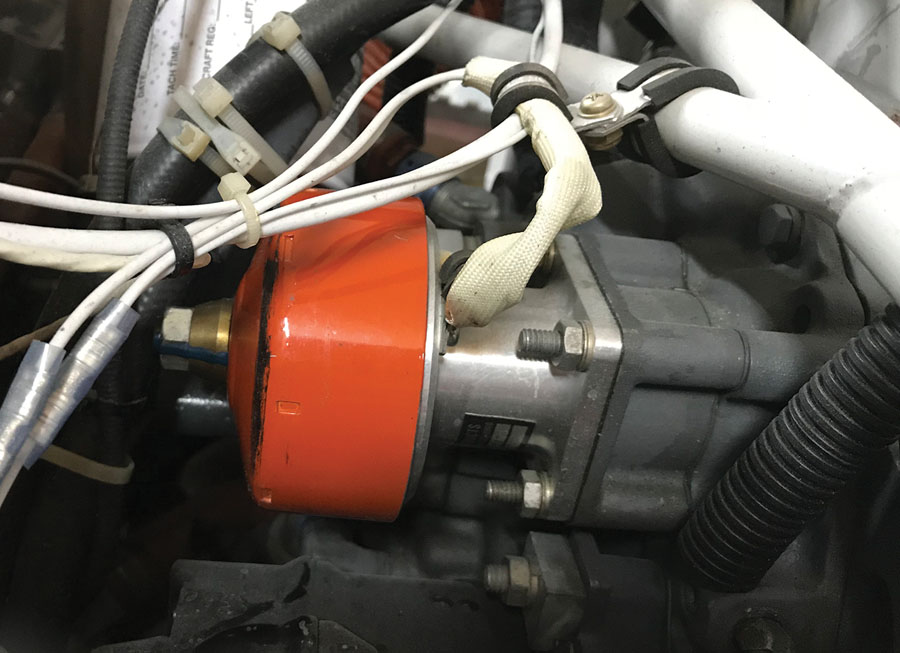 The pilot experienced a main alternator failure while traversing heavily traveled military airspace. The standby alternator failed to work as the hoses pictured in the background were resting against the orange housing. That caused enough friction on the spinning bell that the shear coupling fractured, rendering the unit inoperative.

Strain relief of wires and tubing is really important in a high-vibration environment such as a piston airplane. If not supported properly, the wires will eventually fail at the connection, and tubing, such as that used in primer lines, will work harden and then crack. Not good!

When crimping lugs onto the ends of wires, it is important that the lug is sized for both the size of the cable and the lug to which it is attached. Using a large lug on a small terminal just sets it up for a premature failure, usually at the most inopportune time. Imagine taking your family on a Florida vacation and transitioning through heavily traveled military airspace and having your main power lead from the alternator, known as the B lead, break off due to both of the above mentioned bad practices. Kinda puts a damper on the trip, doesn’t it? I know of one airplane on which this really happened. 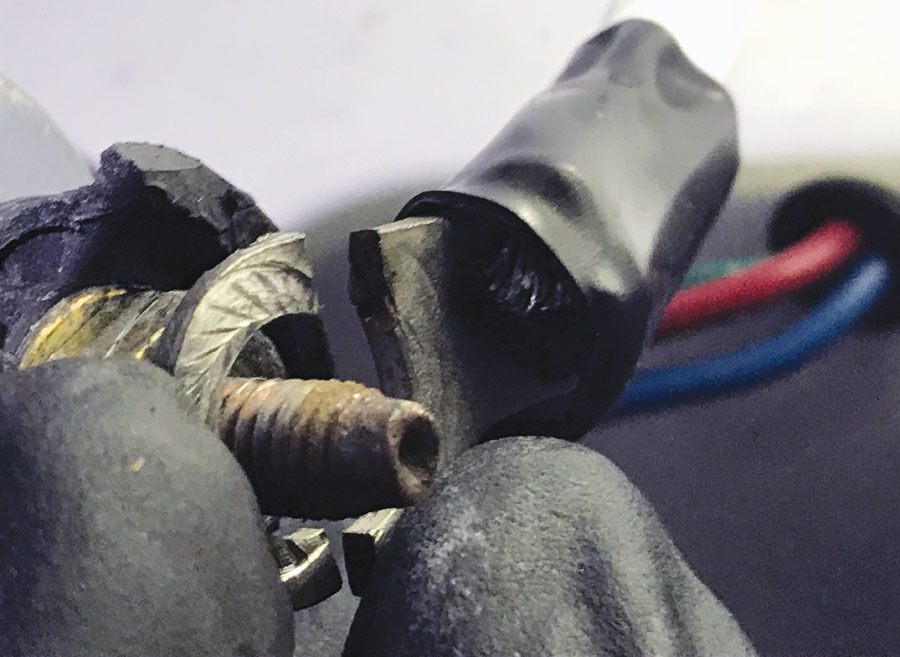 Overtightening an oversized lug does not prevent failure. This one eventually broke off at the alternator. You can see the distortion marks on the lug from overtightening it.

Another area of misunderstanding has to do with the fluids needed in the airplane once it is finished. Brake systems seem to be prone to problems here, as some builders don’t understand that automotive brake fluid and aircraft hydraulic fluid are totally different and not compatible with each other. Filling your aircraft brake system with automotive hydraulic fluid will cause the seals and O-rings to swell up and fail within a matter of days, requiring a complete replacement of all seals and O-rings. It’s a messy job and not a lot of fun, especially when a builder is on the homestretch and thinking about that pink slip and flying! 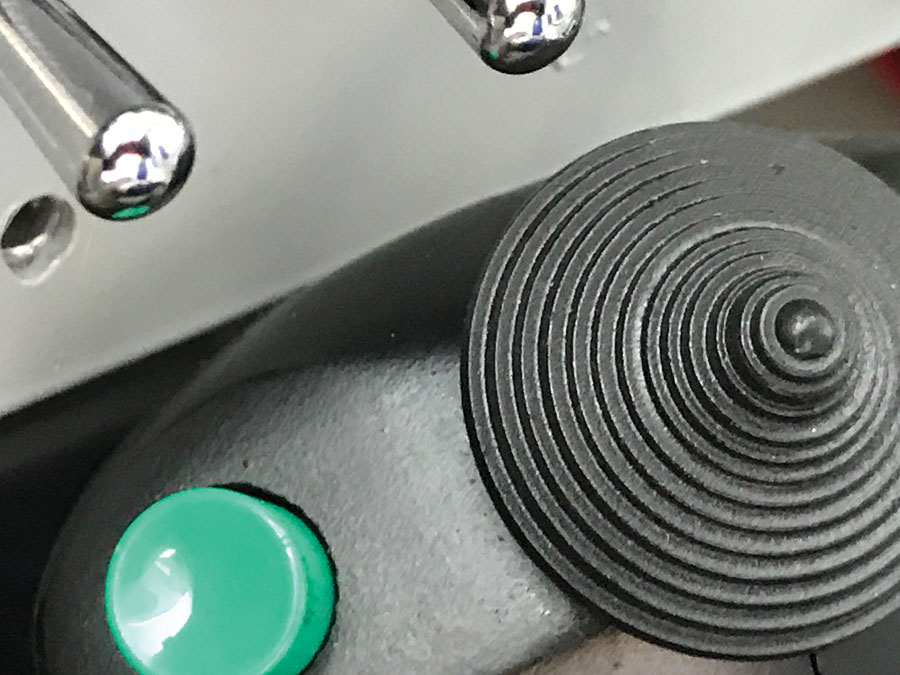 I see way too many examples of this: The stick hits the instrument panel and does not allow full forward control deflection.

One last area I want to highlight that really needs some attention is interference with the control system. I repeatedly see where builders have increased the height of the instrument panel in order to fit everything in it, along with adding a fancy stick grip with lots of buttons to control everything, and a nice cushy interior with fat, fluffy seats to boot. There’s absolutely nothing wrong with that, and I am just as guilty here. However, you do have to pay attention to ensure that nothing interferes with the control stick/column throughout its entire range of motion. If the stick hits the panel or the engine controls, it’s a no-go item. Period. It probably isn’t going to be much fun when you are doing stalls only to find out when you push the stick forward it catches the trim button or PTT, or worse yet, binds up. Or how about running out of control deflection just as you are making that crosswind landing and really need it? Not exactly keeping the fun factor alive, are we? 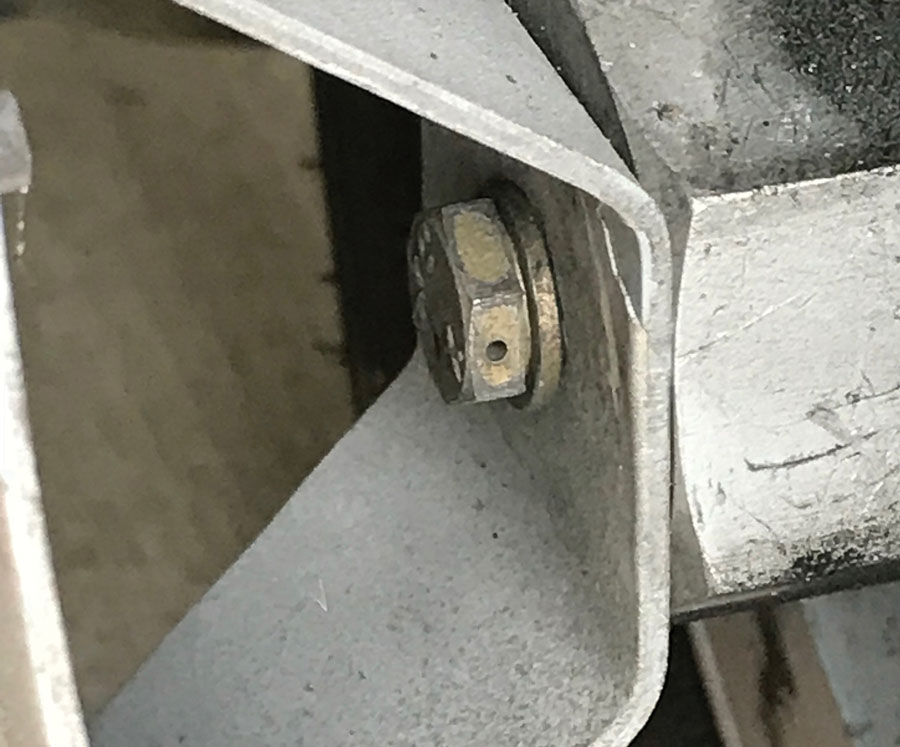 Drilled head bolts are drilled for a reason. Usually the part is subject to high vibration or rotation, such as this wheel pant bracket. It requires safety wire. I pointed this out to one builder/pilot and received a very questioning look. I was vindicated when we looked at the other wheel pant and the bolt was completely missing!

Stay tuned for some more material on bad practices. My goal is to help you recognize them before you make them, so you can build a safe and reliable airplane. 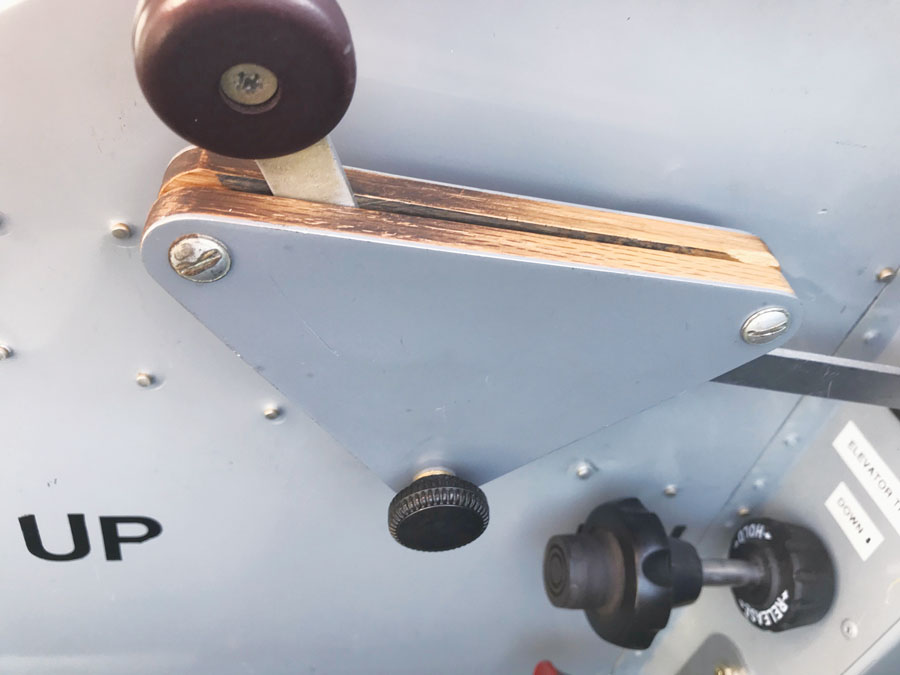 By now many of you know one of my pet peeves has to do with labeling all controls in the cockpit. In this case, can you imagine a non-pilot rear-seat passenger pulling the throttle back right at takeoff? “I thought it was the control for the vent, and I was hot.”

Vic Syracuse is a Commercial Pilot, CFII with ASMEL/ASES ratings, an A&P/IA, DAR, and EAA Technical Advisor and Flight Counselor. Passionately involved in aviation for over 40 years, he has built 11 aircraft and logged over 8700 hours in 72 different kinds of aircraft. Vic volunteers as a Young Eagle pilot and Angel Flight pilot. He chairs the EAA Homebuilt Council and is a member of EAA’s Board of Directors. He also has his own sport aviation business called Base Leg Aviation.