Last month’s column, for those of you who saw it, was entitled “Prepping for the Sale.” I have been busy in the last few months since I wrote that column doing prebuys and initial airworthiness inspections. Due to some of my findings on those, I figured a more beneficial column for all of us might be “Prepping for Flight.” Why? I have to tell you that I really am surprised at some of the things I find on flying airplanes, and I am not talking about basket cases. I’m talking about regularly flying airplanes with current inspections that are being flown by their owners (except for the unlicensed ones, of course).

This column is certainly not meant to point fingers, but I hope it does give everyone pause, as well as to take to heart some recommendations and go look at your own aircraft. I will tell you that not everything I find is due to carelessness or neglect, and there are times when I will come home and check my own aircraft after I see something on someone else’s airplane. Heck, we can all miss something, and sometimes we can get a little careless over time with preflights when we are the only person flying the airplane.

I bet most of you already know what is at the top of my list! That’s right—jam nuts. I don’t know what it is with jam nuts and their propensity to be loose. While I have no doubt one of them could in fact come loose during the life of the aircraft, I haven’t seen that. What I have seen, and I keep seeing it way too many times for all of the articles and columns I have written on them, is that they were never tightened in the first place. Just last week I inspected an RV-6 that had been flying since 2003. So that means it had about 15 condition inspections, and with 400 hours of flying, quite a few preflights. I could verify the condition inspections were signed off, but admit I am assuming preflights were done. But there it was—a jam nut on the left elevator that had never been tightened from day one! It’s not like it wasn’t visible. It was standing proud at least four full turns, and there was no scoring on the paint underneath it. It’s super easy to see and check on a preflight. I politely pointed it out to the owner, along with four of his friends who were there, and they all agreed it had never been tightened. 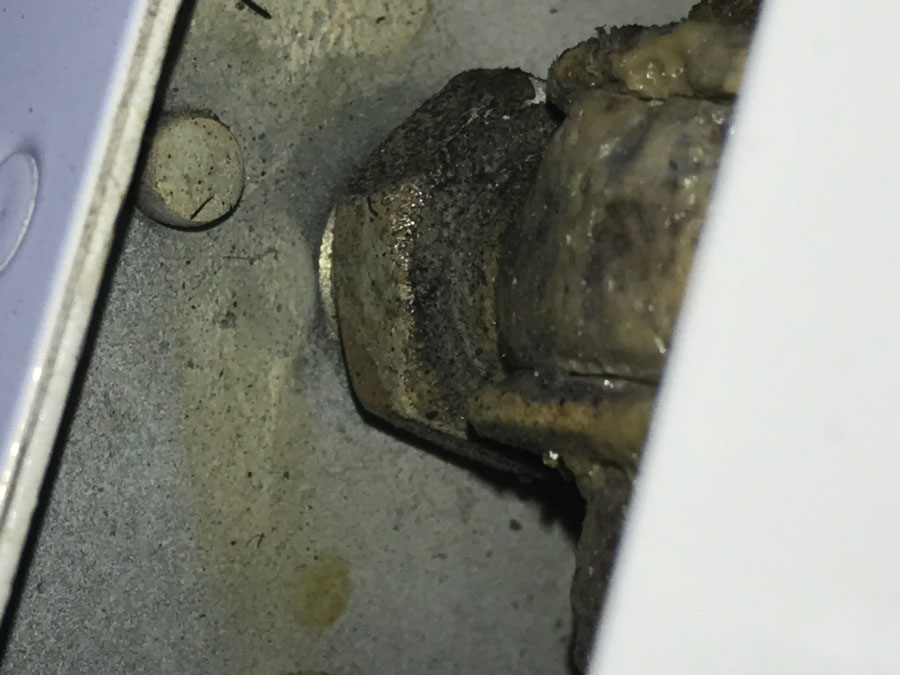 It’s a little hard to see due to all of the dirt, but this jam nut was found on an elevator on an aircraft that had been flying for over 15 years and had never been tightened. No excuse, as it is also very easy to see on a preflight. 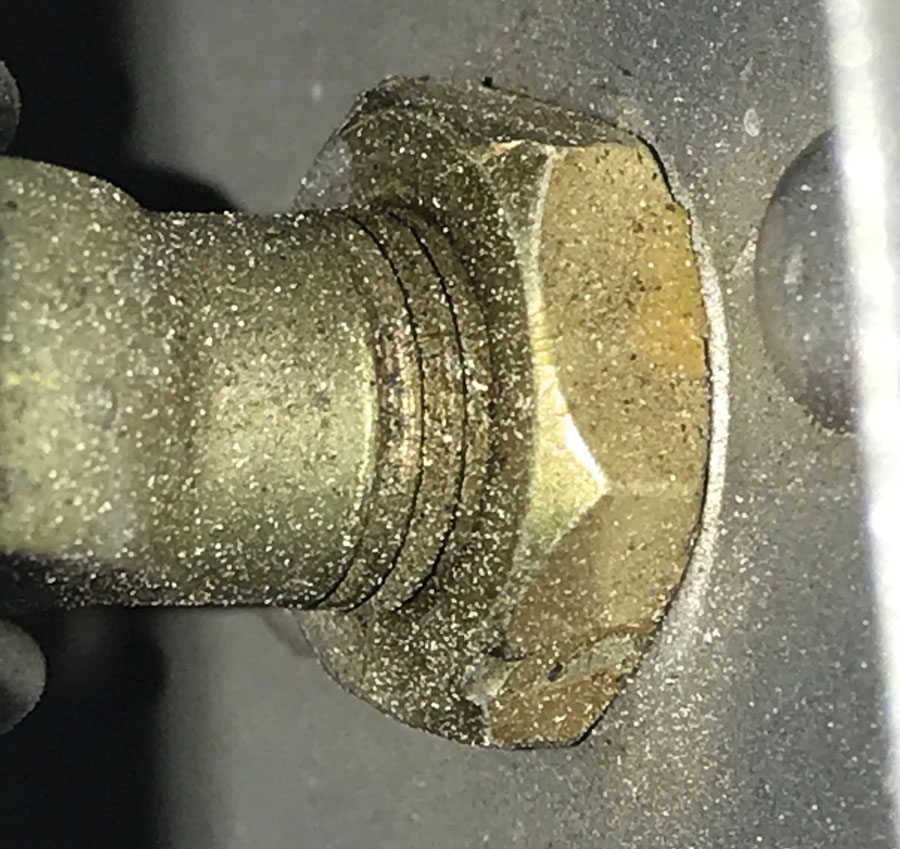 So, considering there are over 10,000 RVs flying, and I only see about 150-200 every year and have only found a handful without a loose jam nut, there most definitely seems to be some kind of plague out there. I am trying to figure out how to start a movement—can we just say no to loose jam nuts? Perhaps we should have an international “check your jam nuts” day when we can all ground ourselves and everyone gets together to check each other’s airplanes. There could even be a prize for the person who finds the most. Perhaps we could eliminate loose jam nuts? I’m beginning to think eradicating world hunger might be easier.

Another very common problem I see is that logbooks are missing the required annual ELT check, or the ELT batteries are expired. Yep—the operational check needs to be entered into the logbooks annually per FAR 43. More than half of the airplanes I look at are missing this entry. What appears to happen is that after the first year or so, the ELT batteries get replaced at some point between condition inspections. The replacement and ops check are noted in the logbook, and then the ops check skipped at the next condition inspection because it isn’t due. The owner/operator can change the ELT batteries and make the entry. 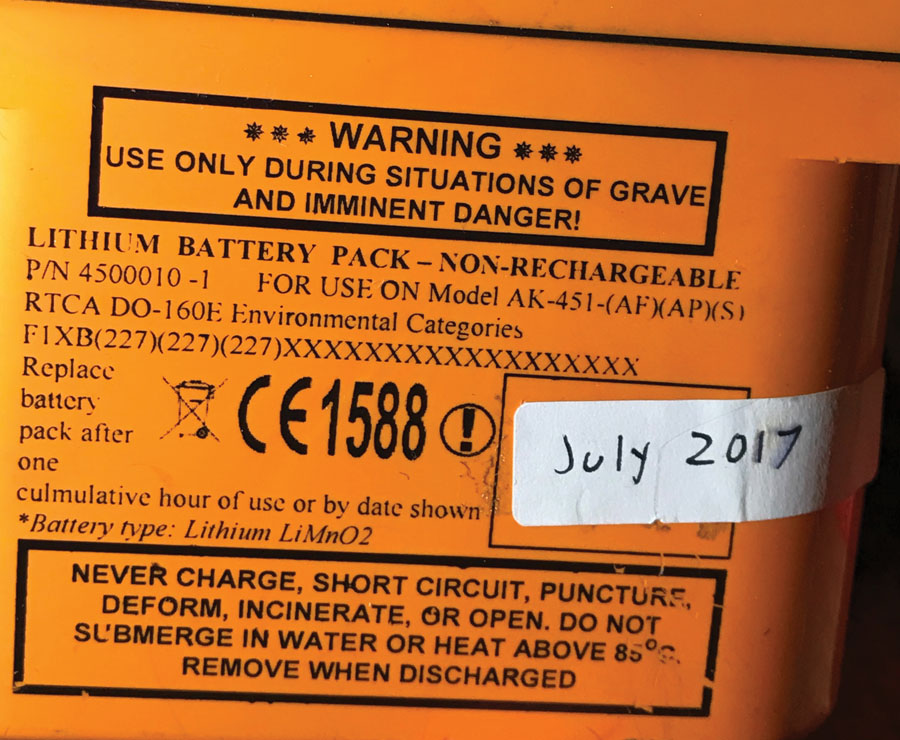 All ELTs have a battery pack that has an expiration date. They are required to be replaced whenever 50% of the life has been used or as per the date. Battery replacement and the required annual ELT operational check should be entered into the logbook. This ELT was checked in 2018, a little past the expiration date for sure!

Another amazing find has to do with unlabeled fuel caps. There is a requirement that they are labeled with the quantity and type of fuel. Some get missed at the initial airworthiness inspection, and I know some are temporarily labeled if the airplane is unpainted. Then it gets painted and the labeling is forgotten. If you think about it, the fuel caps are checked on every preflight, or at least they should be. It’s another item that is staring us in the face every time we go fly, yet it gets missed.

There are two mundane areas that seem to cause problems with regards to airworthiness: paperwork and equipment checks. Let’s start with the paperwork. Remember ARROW that most of us were taught when learning to fly:

It is all still applicable to amateur-built aircraft with a little modification. The radio license is only required if flying internationally (Bahamas, anyone?). While a POH is not required for experimental aircraft (although it is a good practice), the operating limitations that were given to you at the initial airworthiness inspection are required. As a matter of fact, they are a part of the airworthiness certificate (it says so right on the certificate) and they must be in the airplane at all times. I usually find them missing when the aircraft is on its second or third owner and nobody explained it to them, but I have also found them missing with original owners. We usually find them in the paperwork that all got boxed up and put away after the inspection! If you can’t find yours, usually the local FSDO will create a new set of limitations and an airworthiness certificate for you (they have to match). Or you could call the FAA In OKC, and they may send you a copy. There is some thinking that the original copy must be in the airplane, so best to ask the local FSDO.

The weight and balance requirements also seem to be problematic for amateur-built aircraft, especially for those airplanes that were not painted when they started flying. You really need to do another full weight and balance after paint is applied. Unlike adding or removing equipment where you can just do a math calculation based upon the weight and arm, the weight and CG impact of paint cannot be calculated, and a paint job really does affect both the weight and the CG. Often, the only data in the logs is the original weight and balance, even after there were propeller changes and even new interiors added.

As a pilot, you should remember there are some equipment operational checks that need to be performed based upon the type of operations being conducted. The first one that seems problematic is the requirement for the 24-month transponder check, which can be a VFR or an IFR check. I sometimes have to remind the purchaser that since they will be based in airspace that requires a transponder, such as Class B or Class C, they need to have the transponder current before they even head home.

The other operational check that is very often overlooked since the advent of GPS is the 30-day VOR check if being used for IFR operations. This one is really easy to do, especially while flying a cross-country on autopilot. Just look for a Victor airway and a landmark more than 20 miles away from the VOR on your sectional/moving map and then check the VOR receiver, and then note the error, either in the aircraft logbook or just on a piece of paper (or even a file on ForeFlight or other app). FAR 91.171 spells out the detail, but you are allowed six degrees variance while airborne. Once in a while, you will see a test radial marked at an airport, or a VOT test signal, but those seem to be getting more rare these days.

Tire condition seems to be a problem on some aircraft, especially on those with tight wheel pants. I am always amazed at how many completely bald tires I find! I’m pretty sure the tire just didn’t happen to go completely bald on the last flight. I don’t understand risking the airplane for the cost of a tire. It’s really easy to check a tire that has a wheel pant on it by pouring some water on the ground in front of the tires and then rolling the aircraft though the water as you pull it out of the hangar. You’ll quickly find that bald spot that may have been at the top of the tire and hidden by the pants. 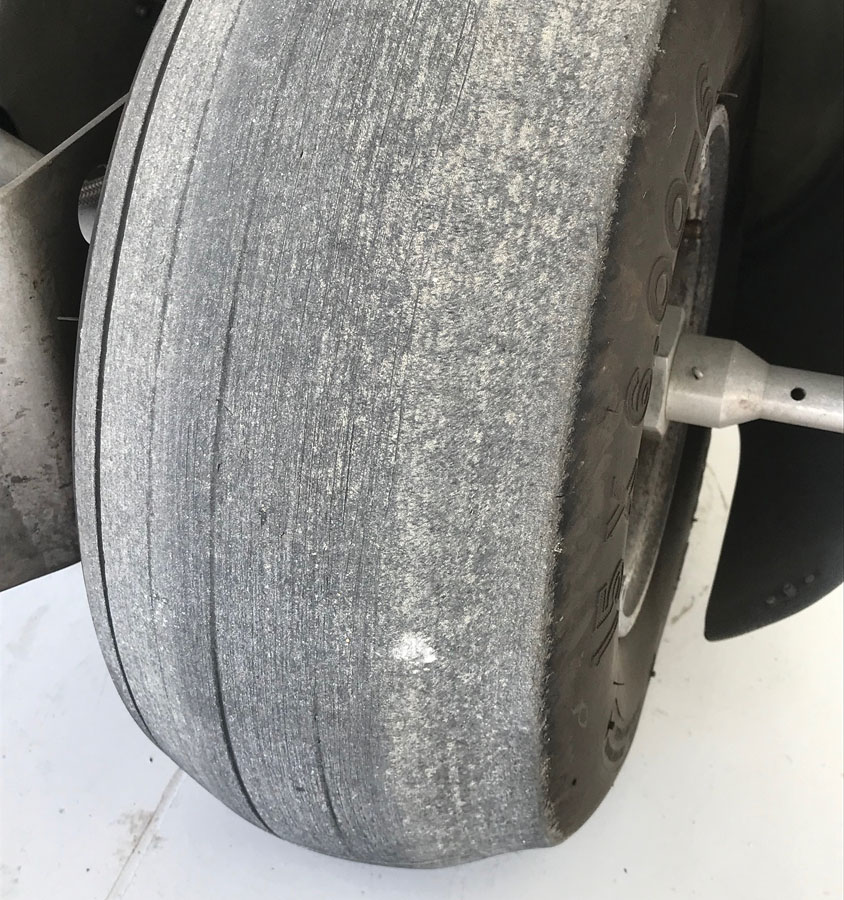 The tire above should definitely be replaced. The tire below should at least be turned around due to the outside wear pattern. It’s easy to catch these if you have wheel pants by rolling the aircraft through a puddle of water on the preflight every once in a while. Why risk a landing accident or loss of control for the cost of a tire? 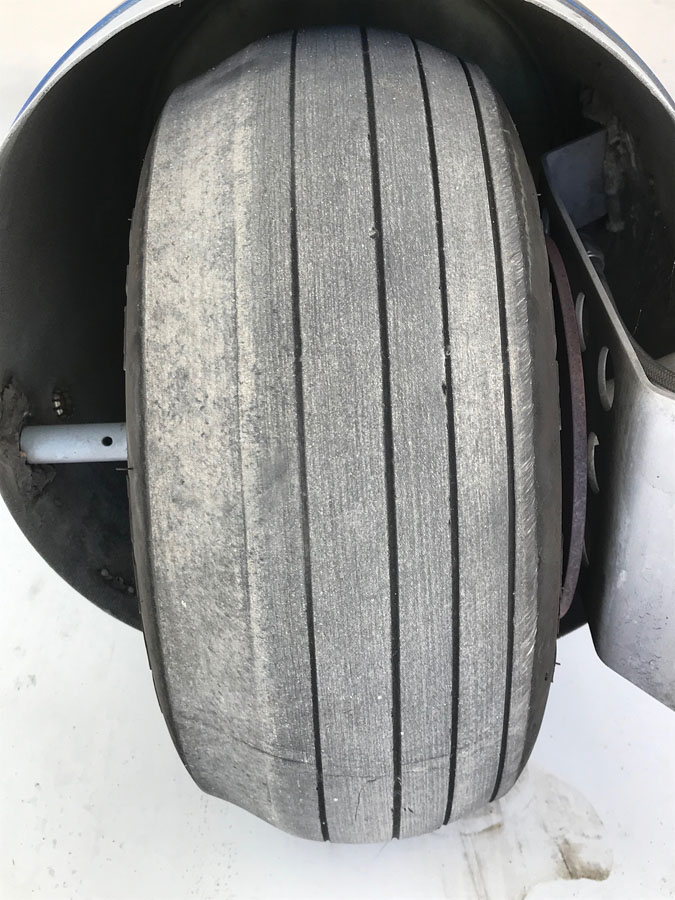 Here’s a challenge I will leave you with, especially for those of you who fly in groups a lot or are part of an active EAA Chapter: Pick a day and have everyone pull their airplanes out, and everyone gets to preflight an aircraft other than their own. That could be fun!

Kitplanes - October 23, 2014
0
StargazingI just wanted to say how much I enjoyed Tom Wilson's article on the...