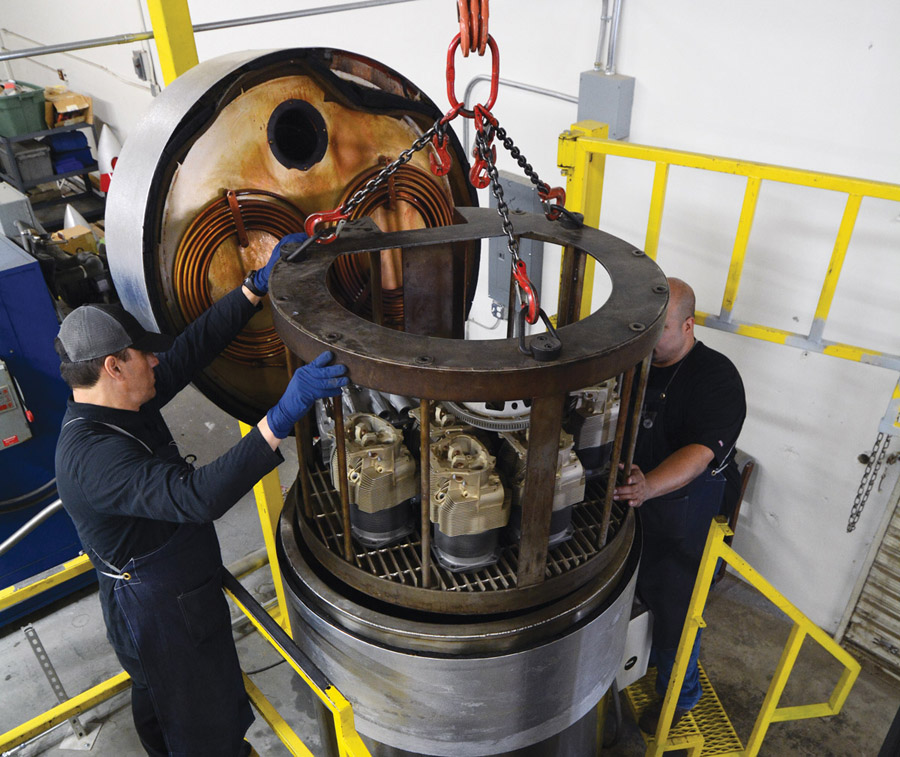 While “cryogenics” sounds like bad religion or NASA boys running around in white lab coats, it’s actually something the performance engine industry—not to mention mainstream industry—has been working with for decades.

Cousin to heat treating, cryogenics is the treatment of materials with large changes in temperature, only with cryo it’s mainly cold, not heat, getting star billing. If you’re truly interested in how cryogenics work, the internet is awash in information, but the very short version is by carefully chilling and reheating material, mainly metals in our aviation context, the crystalline structure of the metal is made more uniform. The result is often a significant increase in stability and fatigue resistance.

In practical terms, cryogenic treatment places the pieces being treated in a well-insulated vessel, then liquid nitrogen is introduced taking everything down to -305 F. This minimum temperature is maintained for however long the operator thinks useful—typical times range from 10 to 100 hours—then the nitrogen flow is stopped and heaters turned on to take non-metals up to about 100 F and metals typically to 300 F for an hour or two. Just enough to take the chill off, as it were. Both cooling and heating rates are controlled, of course, so no shock cooling or heating takes place. Once the thermal cycling is done, the process is finished and the parts are ready for use or further machining as needed. 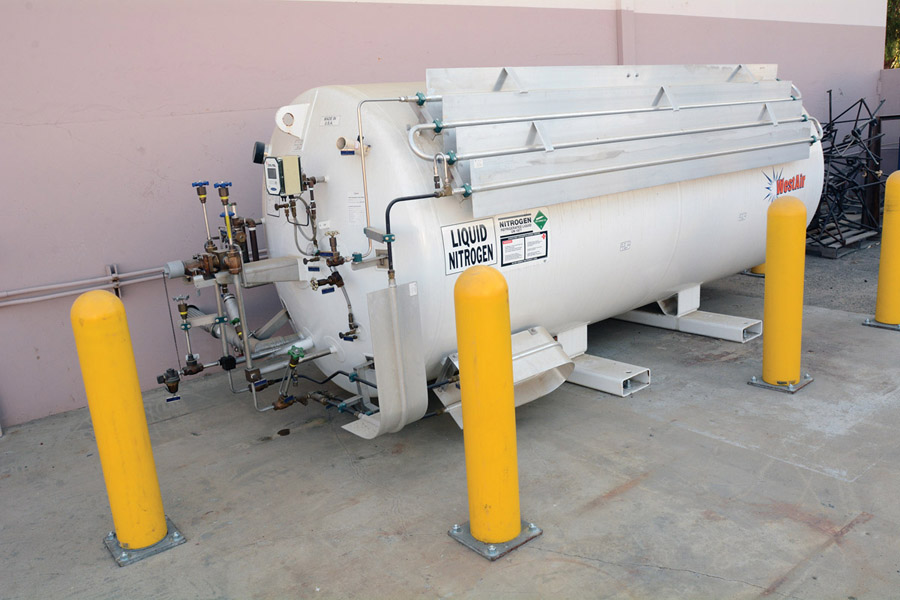 Luckily liquid nitrogen is not hugely expensive as cryogenic treatments are total-loss systems. All nitrogen used is vented to the atmosphere, so plenty is required. Ly-Con’s 1400-gallon nitrogen tank is typical for a cryo shop, although the flat aluminum panels are part of a heating system used by welders but not needed for cryogenics. System pressure is just 50 psi.

It’s important to note cryo is not hardening, nitriding, tempering or anything else. It’s a rationalization of the material’s crystalline structure, and as such, the treatment is effective completely through the material. It is not a surface treatment and can’t be machined off like a heat treatment or typical hardening processes. In part, it can be considered a speeding up of the aging process metals go through at vastly slower rates at room temperature.

Cryogenic treatments for industry date from the mid-1960s and have been heavily adopted by tool makers, aerospace, firearm makers (the military is a major cryogenic treatment customer), auto racers, and seemingly any other industry where stressed parts could stand to last longer and perform better. The benefits of cryo depend on the material treated—various steels and irons react differently to cold treatment, and there are variations in such treatments—but the main benefits come from materials that are more uniform in structure and thus strength. Gun barrels remain rounder and smoother, metal brake rotors typically show reduced wear rates and are much less prone to cracking, tooling lasts far longer and cuts finer after cryo. Engine builders say they make more power with cryoed parts because tight tolerances are held better and longer. Or, as the old hot rodders say, “The round parts stay rounder and the flat parts stay flatter.” 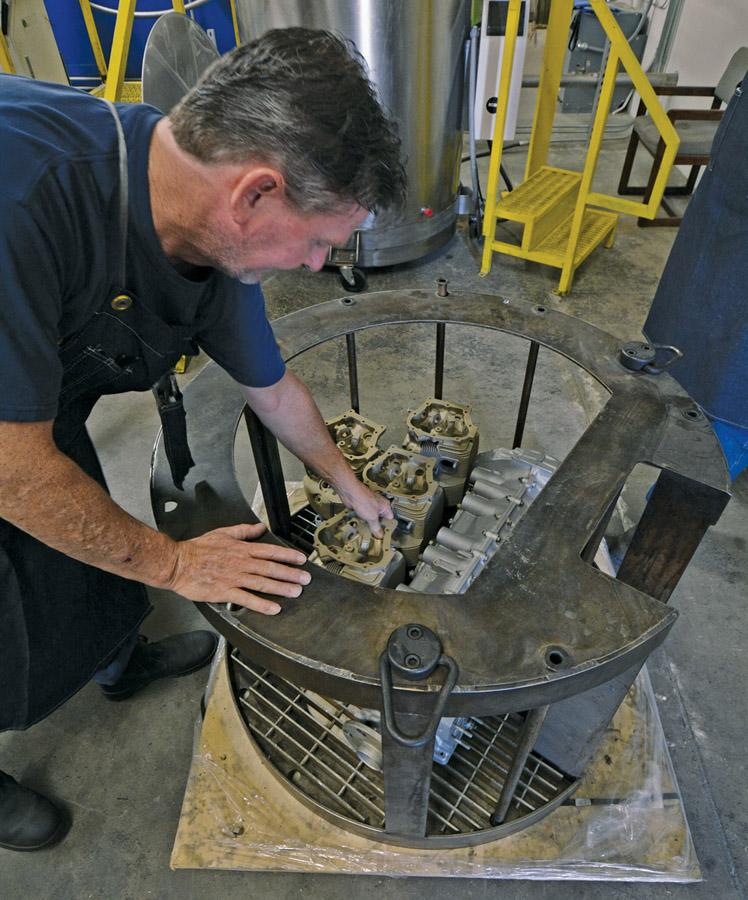 Ly-Con has several cryo vessels, but all are fairly large and use hefty steel baskets to hold the parts being treated. There’re no special parts loading requirements as it’s simply the cold and heat doing the work. Parts can lay atop each other, at any angle or orientation.

Because the molecular details of cryogenic treatment are beyond the scope of this article, we’ll leave further research to your curiosity and internet service provider. Instead, we’ll jump directly to empirical results Ly-Con Aircraft Engines has seen since they started cryogenically treating aviation engine (and other) parts eight years ago. They’re interesting, to say the least.

What really got Ly-Con principal Ken Tunnell hot on cold treatment was Lycoming 540 crankshafts. Ly-Con has long supplied engines—almost all of them lightweight, parallel-valve 540 Lycomings—to major airshow aerobatic performers (Jim LeRoy, Sean Tucker, Skip Stewart), and between 2003 and 2010, about 75% of the Red Bull air racers. This group of Type A hard chargers could figuratively wreck an iron ball, and like a frat house property manager, Ly-Con has certainly learned much from these guys. 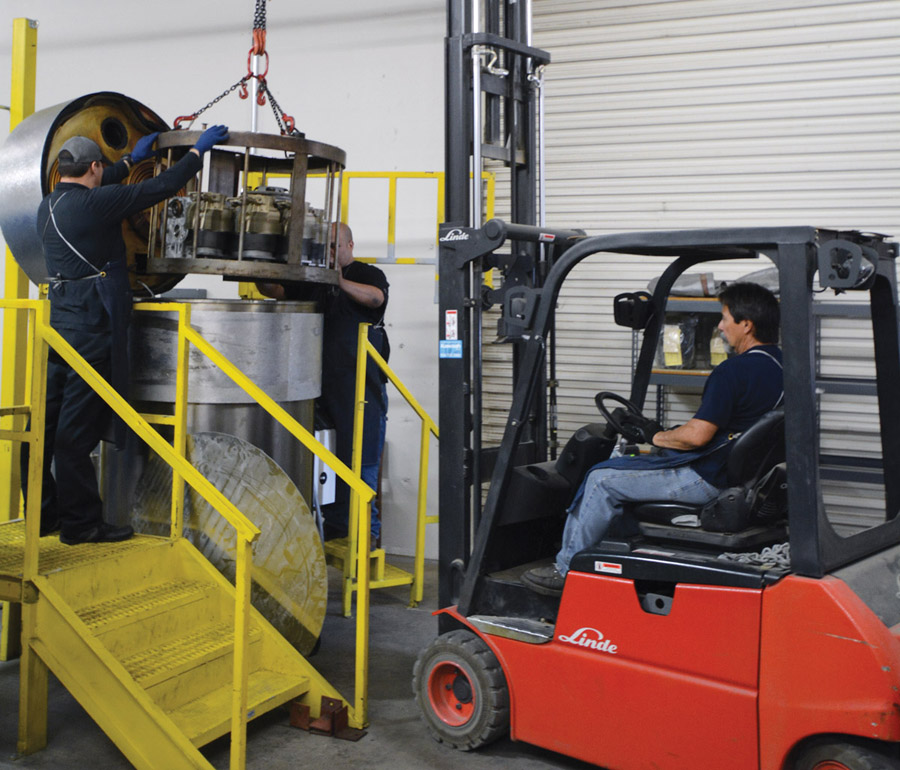 Given the large baskets, it’s easiest for Ly-Con to load an engine’s worth of parts per basket and move it with a forklift. It would be interesting to send the basket out for metallurgical testing as it’s been cold treated so many times!

One such lesson was the best-prepared Lycoming 540 crankshaft, if consistently subjected to tumbling aerobatics, will break the pendulum counterweight mounting ears at between 400 and 500 hours. The failure will occur only during cruise flight at low engine speed, usually around 2200 rpm and never during aerobatics. “For a while I thought I had a propeller problem,” says Tunnell, “but then I broke them with Hartzell, McCauley, and composite props, so that wasn’t it.” 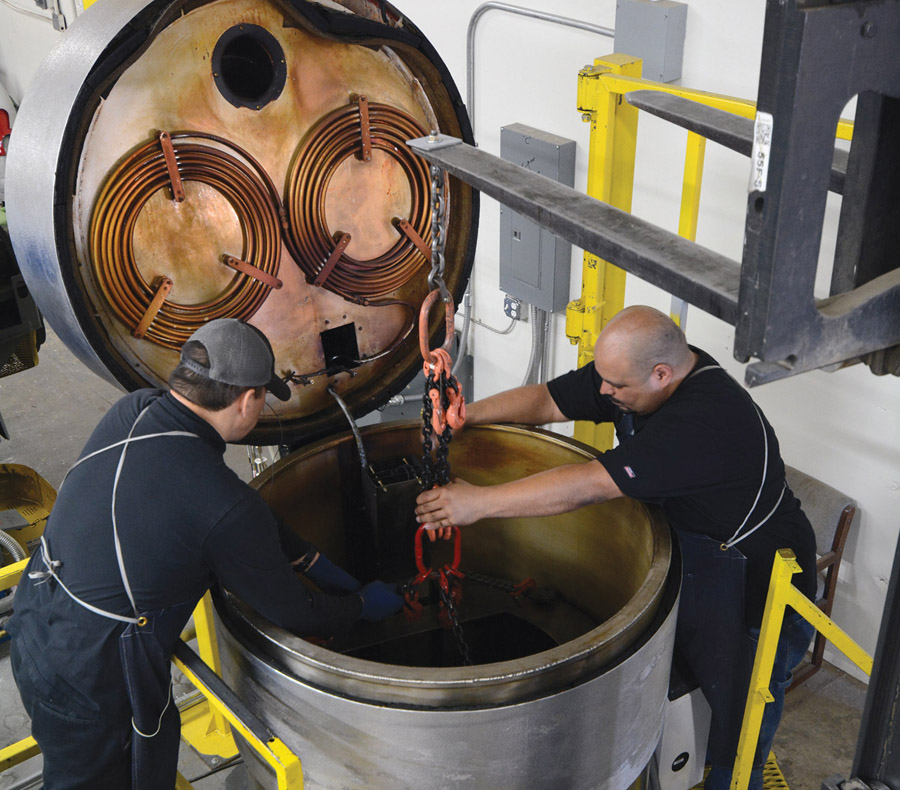 With the basket settled in the tank, the coils of copper tubing in the tank’s open lid are easily seen. The liquid nitrogen flows through the coil windings, transferring heat out of the tank. Electric heating elements take care of the post-chill warmup, and as you’d guess, the tank is heavily insulated.

Thanks to so much exposure to hardcore aerobatics, Ly-Con broke 27 crankshafts in precisely the same way. Then they tried cryogenics and haven’t broken one since. Same engine builds, mainly the same pilots, same routines, and no failures in over eight years. That does make you say, “Hmmm…”

At first having parts cryogenically treated elsewhere, and then buying his own equipment, Tunnell has experimented with chilling seemingly anything, including spark plug wires, ignition coils, golf balls, car parts, industrial items such as 1-inch bolts for oil wells and even a tuning fork. The latter was a test, as Tunnell thinks the rationalization of a metal’s structure could have measurable affects on its harmonic properties. After treatment the fork rang only half as long, yet test labs he sent it to said it didn’t change the vibration frequency, “not one iota.” 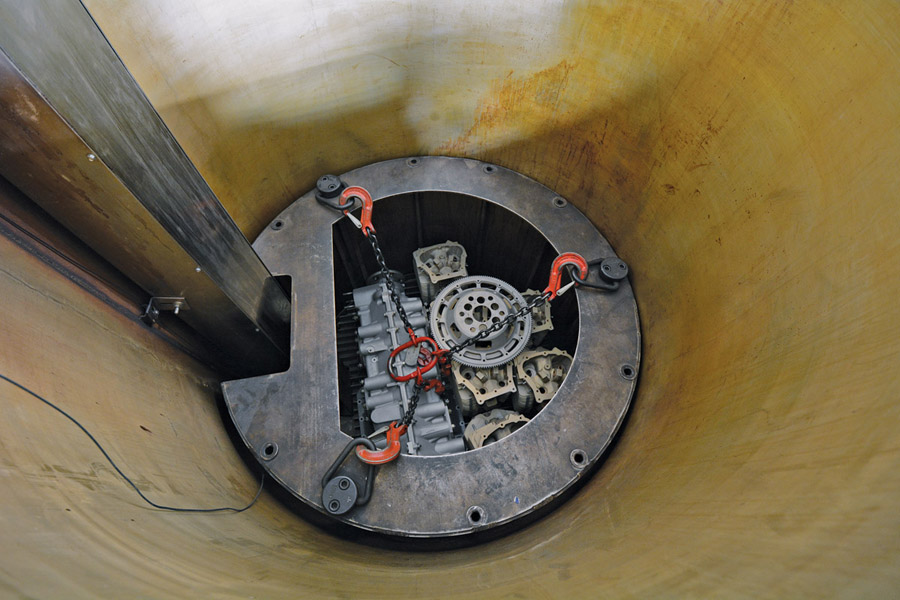 There’s little to see in the lower portion of the cryo tank. It’s simply an insulated chamber to provide a cold space for the metal to soak in.

Tunnell admits cryogenics is still not understood—at least by laypeople—and ultimately sums up by saying, “It’s a black art…and there’s no cookbook for what works, exactly.”

But he also notes, “No one really knows precisely why cryo works, but it does.” And to that end, he cites a litany of informal experience with items made better by cryo.

Those golf balls, for example, drive 25 yards farther; Ly-Con’s carbide cutters last twice as long; auto racers using Ly-Con’s cryo services report clutches that stay crisp much longer, better ring seal, less driveline gear wear, and on and on; farmers say plows and discs last longer; and those Grade 8 1-inch bolts used in industrial applications used to snap off right at the head, but a batch of junk, at best Grade 3, overseas bolts was cryoed and proved at least as durable as the untreated Grade 8 fasteners.

That last example introduces the well-regarded theory that the lower the quality of the metal being cryoed the better the results. More supporting evidence for that comes from a paper by Debra Lynn Smith of Marquette University studying silicon steel valve springs; she found the better the spring material the less effect cryo had on it, but it did help in all cases. 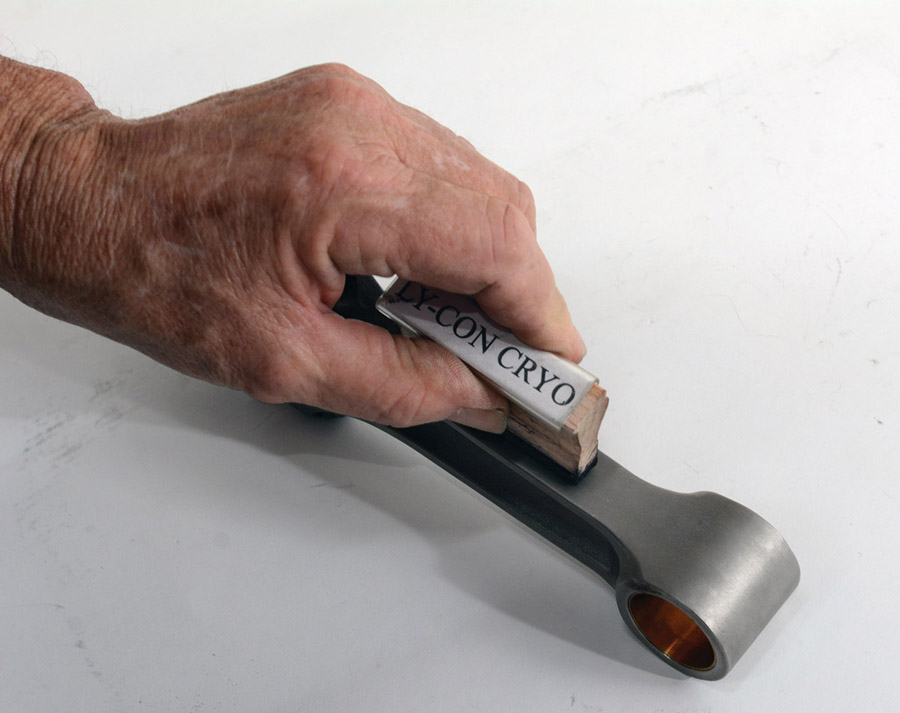 Following the same logic, if Ly-Con wants a set of low-tension piston rings, they cryo the rings in an undersized cylinder. The rings seem to relax, offering reduced-drag cylinder sealing to racers wanting the last bit of power, or efficiency specialists looking for the best fuel economy. 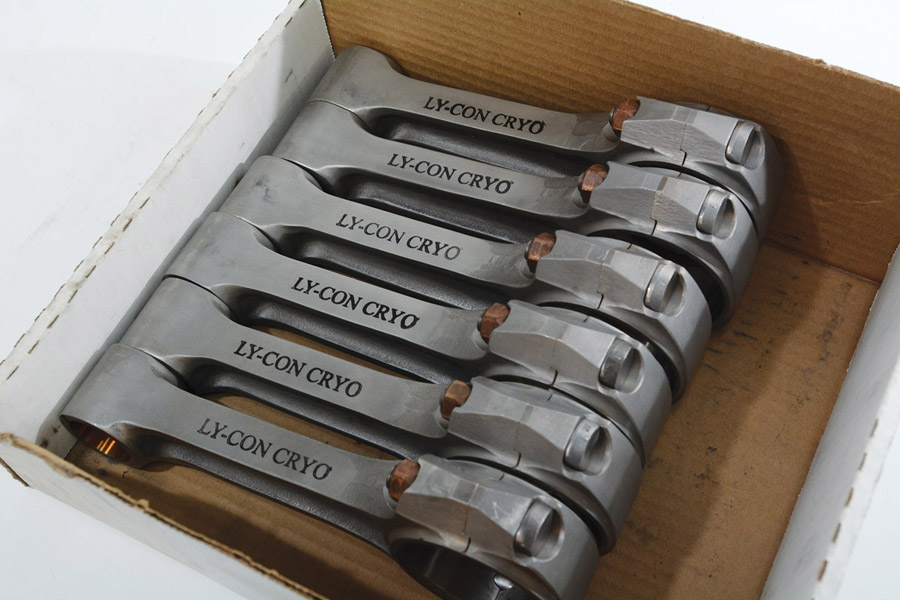 Typically engine parts are cryo treated after all cleaning, inspecting, and machining. This reduces whatever stress may have been induced by cutting, grinding, heating, and so on.

We asked Tunnell what parts he thinks are reasonable cryo candidates for the interested Experimental engine customer. After all, he had also cautioned that “you can make mistakes…you can have it [cryo] not really do anything, but engine stuff seems to work.”

Ultimately, Tunnell believes the crankcase, crankshaft, connecting rods, and cylinders are good cryo candidates. The first three pieces are all crack prone—especially crankcases even during normal engine use—and while cylinder heads and barrels also crack occasionally, the real reason to cryo the jugs is for improved ring seal.

Then there is cost. To date Ly-Con has mainly been cryoing engines for racers and acro specialists, so the treatment has been more specialty work than mainstream workflow through the Ly-Con digs. Thus, Tunnell has been more comfortable with pricing by the pound of material treated, but we thought KITPLANES readers would relate better to cost-per-part pricing. That’s actually proved difficult to figure because there are so many variables, so Tunnell quoted $6 per pound for a 20-hour treatment—what most customers specify—and $32 per pound for 100 hours in the cold tank, which is what large-budget, hardcore aerobatic customers are interested in. Given 260 pounds worth of O-360 parts—that’s pretty much the entire engine—a typical customer would have $1,560 in a 4-cylinder engine at $6 per pound. 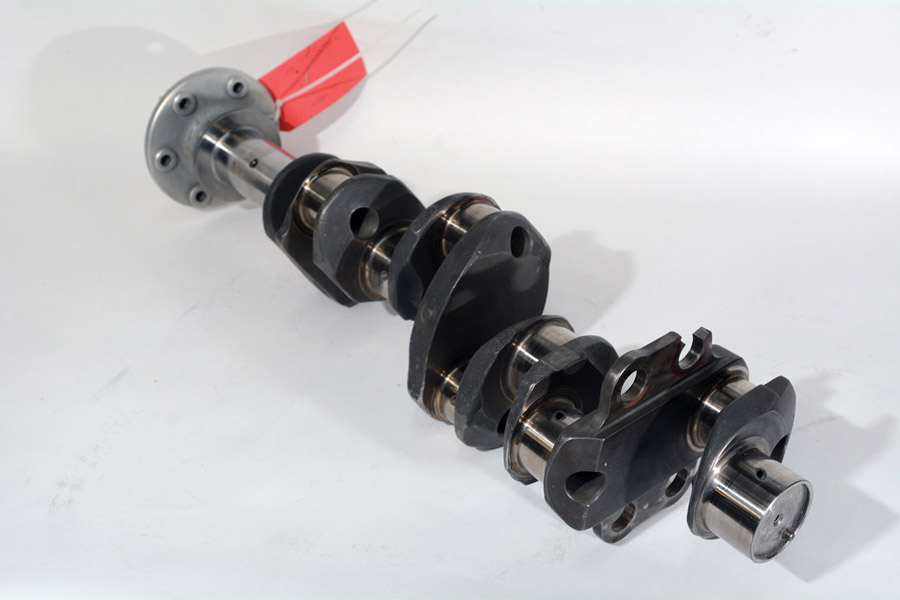 This is one of the 27 crankshafts with broken pendulum counterweight bores. No amount of traditional preparation such as nitriding or balancing prevented these failures in high-output engines subjected to gyration-heavy aerobatics. 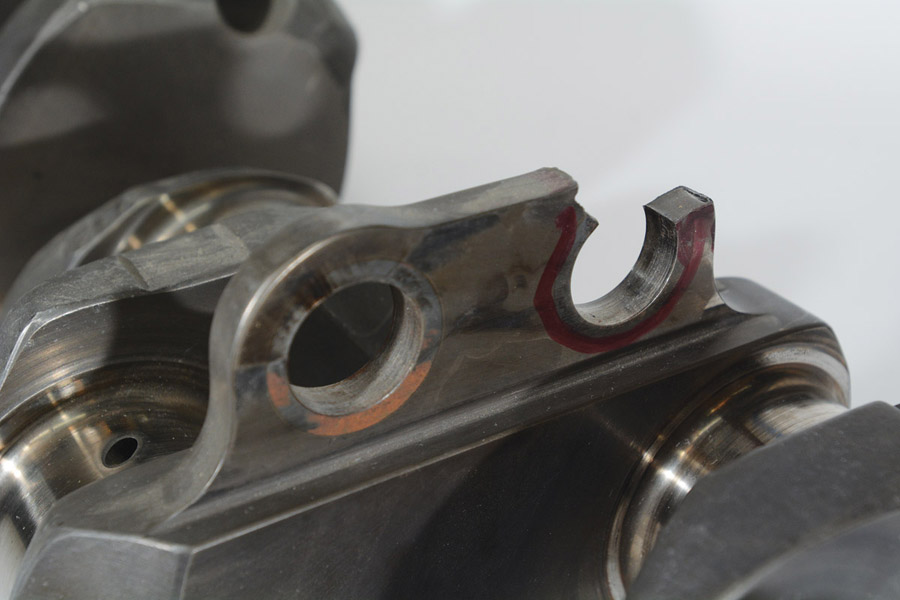 A closer look at the pendulum counterweight flange shows a clean fracture at the failure point—sure sign of a sudden failure. Ly-Con says these 27 failures were identical and haven’t reoccurred since cryogenically treating the crankshafts.

Cost to treat just the crankcase or cylinders would be considerably lower, of course, because they weigh less. We’re tempted by the $6-per-pound pricing for 20 hours of chilling when it comes to the crankcase because the low density and high surface area of a crankcase would seem to respond rapidly to temperature. The thicker, denser crankshafts seem like they might benefit from longer in the cold soak, but that would be something to discuss with Ly-Con or another cryo supplier.

Cryoing does add several days to an overhaul, but hopefully you’re not in that big of a hurry, and the cryo equipment has been up and running at Ly-Con for quite a while, so the service is currently operational. 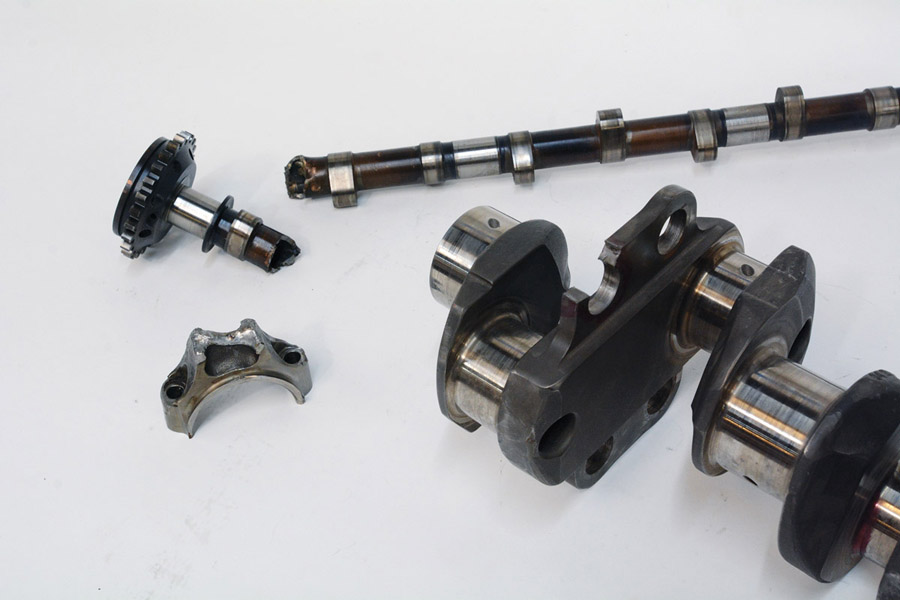 There’s no end to the mayhem from counterweights that let loose at 2200 rpm. The two-piece camshaft and what’s left of a connecting rod are mute testimony this one did not fly back to the airport under its own power. 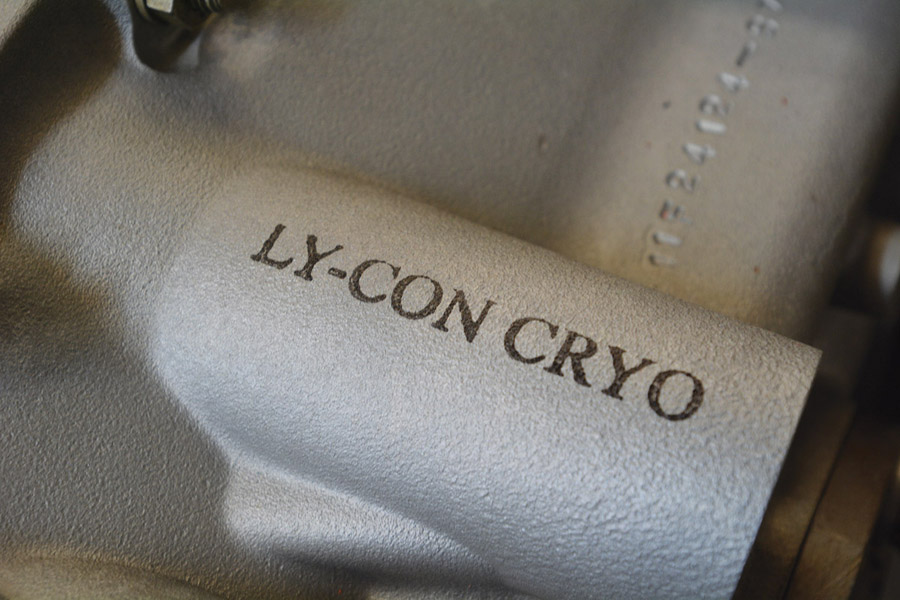 Engine cases are complex, thin castings chock full of machining operations and asked to withstand significant stresses and vibrations during engine operation. All that makes them crack prone and prime candidates for cryogenic treatment.

Bob Grimstead - April 17, 2009
0
Light and slow, yet lacking control skittishness, the X-Air is a simple and fun way to go nowhere in particular. By Bob Grimstead.