Im not sure what I was thinking when we decided to order a Kitfox IV complete kit somewhere in my eighth month of pregnancy, way back in 1992. I guess I figured it would be awhile before the factory could get the materials together and throw the big crate on a truck, and we were just about as far from Nampa, Idaho, (the home of Kitfox at the time) as you could get in the continental U.S., so the shipping would take a little time, too. 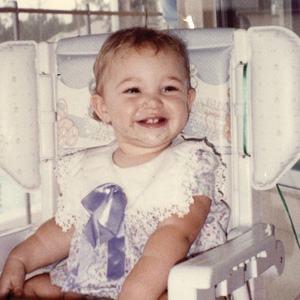 Birthday No. 1 for daughter No. 2. She seems happy with the attention. Little Bird is not pictured-it is safe in the two car garage with its wings folded back, having recently been signed off by the DAR and made its first flight.

Good thing that my daughter decided to come into this dimension of the world a couple of weeks early, because by the time she was three or four weeks old there was a crate sitting in our driveway, and our adventures were in full gear.

Turns out I didn’t do nearly as much of the building of that project as I thought I would (did I forget to mention that this was daughter No. 2, and her older sister was only 14 months older than she was?). I was helpful when a third or fourth hand was called for, and spent a fair amount of time impersonating a human sawhorse. Actually, I worked better than a sawhorse because I could easily be commanded to tilt or straighten whatever I was holding to precise angles for leveling or creating wash or dihedral. Really, I was fine with that. My husband is a master craftsman, and he built a fine machine.

All in the Family

Some nine months after the Kitfox arrived in parts, she flew. And Little Birds been a part of the family ever since. The airplane has ferried us to countless pancake breakfasts, and flown its share of hundreds of Young Eagles flights on Saturday afternoons. It knows the way to Lakelands FAA production studios on the Sun n Fun campus without the aid of a GPS. In fact, it was built before GPS was ubiquitous, and there’s no good place (short of strapped to your thigh) to put one on the panel, so we fly pilotage everywhere in it, even today.

The airplanes never flown north of the Florida/Georgia line, or west of the Gulf of Mexico, but even within its relatively small playpen it has convinced us that taking your time, even when flying, is well worth it. 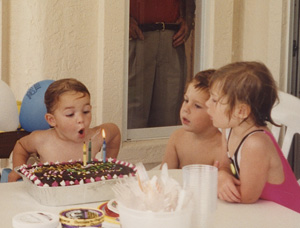 Birthday No. 2. This time she appears to understand the ropes (she is flanked by daughter #1 and friend #1). Little Bird (not pictured) is still sharing the authors two-car garage with a Dodge minivan. The then Rotax 582-equipped airplane was often towed 1.5 miles behind the minivan to KFMY for flights, launching from the EAA hangar.

One of my favorite flights ever was with a crusty old hunter, a friend of my fathers, who wanted to see where the ducks might be hiding before the season started. We took off and cruised over to Lake Okeechobee at about 500 feet AGL, and then we slowed to about 55 mph and began to wind between marsh and lakeshore, circling, weaving and gradually working our way across the state of Florida. Eventually, somewhere near Sebastian, on the east coast, he was satisfied hed seen what he wanted, and asked me if we needed to land for fuel. I looked up at the fuel tanks and saw we still had at least half of our load. I told him wed start home and see how it went (there were plenty of good airports with fuel along the way). We climbed up a bit, caught a nice tailwind and were home an hour later, with plenty of fuel to spare. I did the math later and calculated that wed burned about 3 gallons of premium unleaded per hour, for 3.5 hours. We could have flown on that way for another 2 hours, and landed with a half-hours fuel in the tanks. Amazing. But then, that is exactly what we built the airplane for.

Another all-time favorite was fish spotting, a job our Kitfox is uniquely qualified for, with its full Lexan doors. Its good for spotting people, too, and we’ve participated in search and rescue training with dogs and personnel on the ground.

An offshoot activity of the SAR and fish spotting is air-to-ground photography, which, in this airplane, is a simple matter when you open the door up and let it sit there, pinned by the wind against the wing. At 60 mph (or slower if need be), it doesn’t take long to capture a subject. Air-to-air photography also works well, as long as the subject doesn’t have to fly faster than 60 mph! 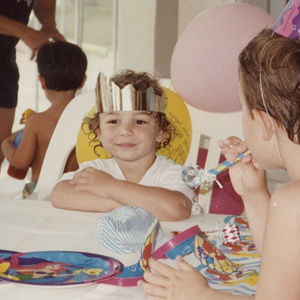 Birthday No. 3. The queen for a day surveys her realm with satisfaction. Her airplane twin spent the year busily hauling more than 100 Young Eagles skyward and was a magazine star, too, in a piece asking the question, Kit or Conventional?

Sometime during the last 10 years I re-encountered my very first flight instructor, a lovely woman named Robley. She was just hitting her stride in midlife when I was a teen, and was a kind and patient soul for two years while I made my way, slowly, through the private pilot curriculum. Non-judgmental, she listened while I circled, gently bringing the subject matter back to our focal point: flying. A saint, truly, in retrospect.

Shed gone on to manage a seaplane operation in Louisiana, and a few other endeavors with her husband, Don Grelick, eventually resettling back in town and focusing more on horses than aircraft as they both pushed the big 80. It took a little doing to help her now fragile frame up into Little Birds passenger seat (the joints don’t bend like they used to), but once she was there, she was at home, and nothing made her happier than our short jaunt out over the islands shed grown up on. She told me it was soothing to see her home from the low-and-slow perspective one more time.

Over the years the airplane has endured an engine change (from geared two-stroke to direct-drive four-stroke), a prop change (from three blades to two) and new landing gear (shifting from bungee style to spring steel). Overall, the changes have been improvements. The Kitfox now climbs and cruises a little faster than when we first built it, and runs cool and clean. Other than a bent rudder and a broken tailwheel spring or two (neither of which were the airplanes fault), it has seen no damage. And, no, Im not telling you that because Im ready to let it go. 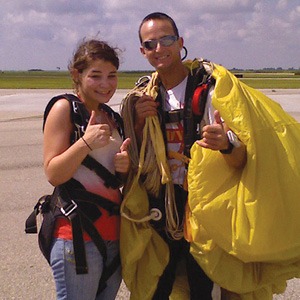 Birthday No. 18. By now daughter No. 2 has figured out how to ask for precisely what she wants. In this case it was a free-fall tandem skydive hooked to the front of swooney skydive instructor Tom-with a great South African accent!

In fact, as the calendar flies by my youngest daughters 18th birthday, Ive found myself feeling downright nostalgic about Little Bird. My daughter celebrated her special day with hoopla and hijinks like they all do, and, yeah, it was fun. But the nicest part of the weekend was when we fired up Little Bird and flew low and slow along the Caloosahatchee River toward Lake Okeechobee, to Clewistons Air Glades Airfield, where we landed to watch her exercise her God-given right to be hurled out of a perfectly good Cessna Caravan from 13,000 feet, and experience the thrill of about 50 seconds of freefall, followed by 5 minutes of floating under a giant yellow canopy toward the drop zone. From 1500 feet up, she could be heard hooting and hollering with delight. As a 2-year-old her favorite phrase was, Do it again! So you can imagine what the first words out of her mouth were once shed landed.

Through it all, Little Bird sat, steady, its cowling inlets almost seeming to smile, pointed toward the drop zone where all the celebrating was taking place. Later that day, as I put the airplane away in the hangar, I patted that nice round cowling, and promised an oil change soon. After all, a little attention was due, it being Little Birds birthday weekend, too.

Little Bird makes one of its first flights about a year after the kit arrived from SkyStar (now Kitfox) Aircraft, then located in Nampa, Idaho. It is one of the first of the clipped-wing Kitfox IV aircraft. Really. The author and her husband helped write the construction manual, she thinks!