When last we left our newly LEDed aircraft, we said that we would tackle the power supply for the landing and taxi lights. And so we will.

As I said in the April column, switching power supplies are efficient and noisy. Sure, noise can be filtered out, but at what price? Inductors and capacitors are relatively large and expensive. Since most of today’s aircraft have battery/alternator power to spare, linear regulators are my choice for ease of construction and reliability.

These high-powered (20 watts of DC power, 100-watt-equivalent incandescent) LEDs that we are going to use in the landing/taxi lights are going to draw about 2 amps of juice (each) from a 12-volt aircraft power supply. They aren’t inexpensive ($38 each), but if you have a 2000-hour TBO engine, the projected life is 32+ engine overhauls (65,000 hours). 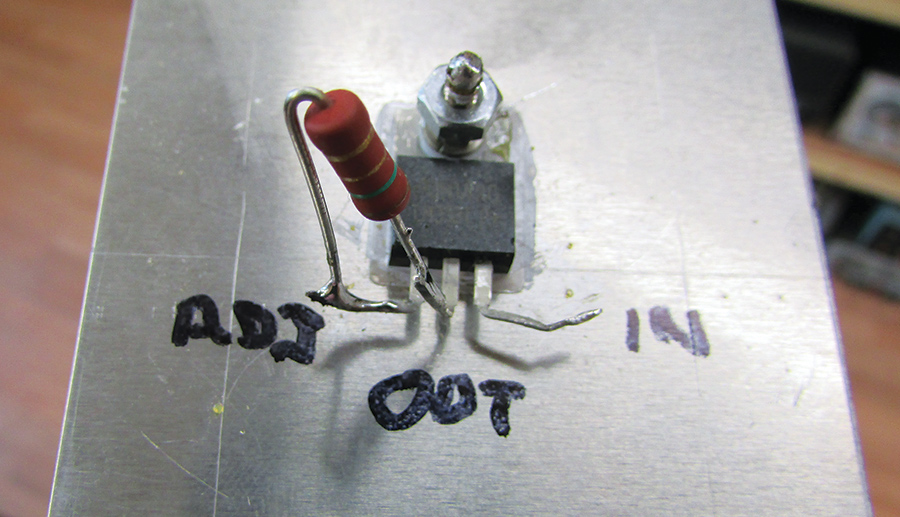 The “improved” power supply with two components, the IC and one resistor. 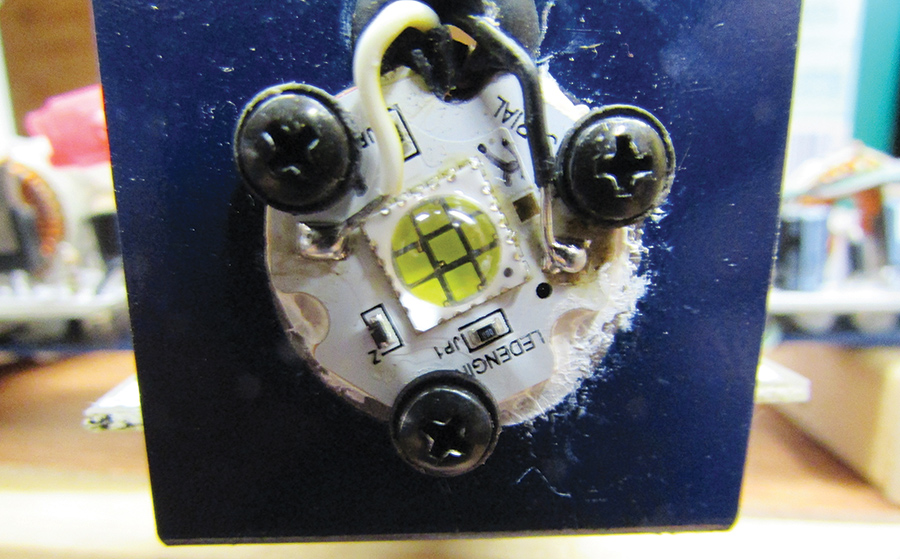 he frontal view of the landing light showing all nine LEDs (the little green squares in the center of the picture) on the heat sink ceramic substrate.

Then the question becomes, how many of these lights do we need to be both legal and safe? The feds are very wishy-washy about landing light specifications except FAR 91.205 (c)(4), which says: “If the aircraft is operated for hire, one electric landing light,” and even then only if operated at night. The “electric” part? Legend has it that one doofus pilot was using a kerosene lantern hung out in the breeze to satisfy the 1920 landing light regulation…kerosene, flame, butyrate dope on the fabric…poof.

But there is another FAR that tells us how we have to build airplane lights (FAR 23.1383). Here you go:

23.1383 Taxi and landing lights: Each taxi and landing light must be designed and installed so that: (a) No dangerous glare is visible to the pilot; (b) The pilot is not seriously affected by halation; (c) It provides enough light for night operations; (d) It does not cause a fire hazard in any configuration.

So, if we make it so the light doesn’t shine in our eyes, it doesn’t shimmer, it’s “bright,” and it won’t catch fire, we have our design done. Pretty simple and not a lot of technical gibberish. The catch? If you land at night and hit something, the feds can say, “Your light wasn’t bright enough,” and you are on the hook to prove that it was.

Schematic of the “improved” power supply. 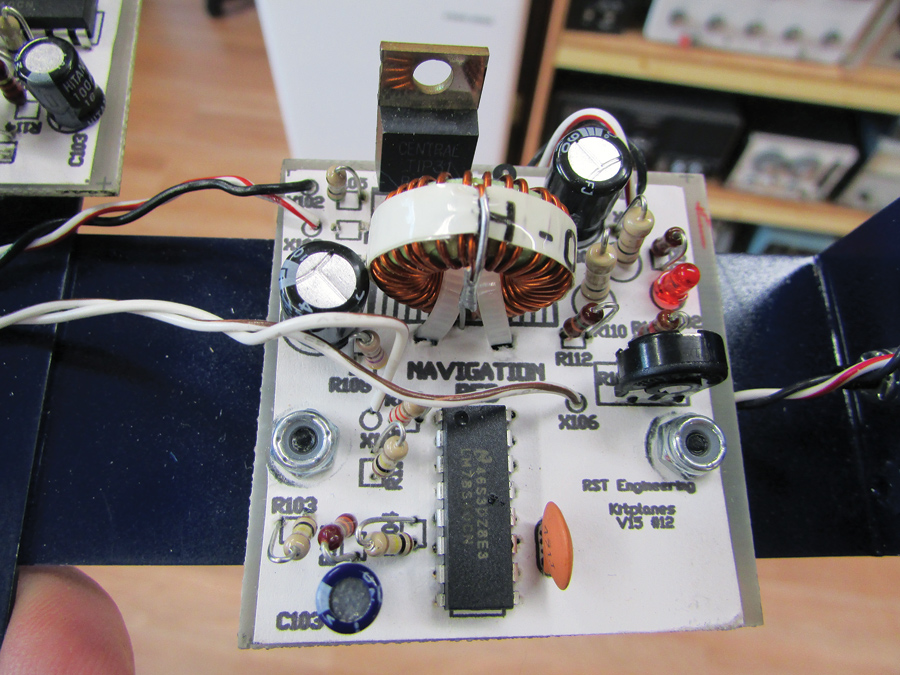 Contrast its simplicity with the switching power supply’s original design.

Since we are in the Experimental category of airplanes, and since we can’t use our airplanes for hire, the landing and taxi lights are strictly for our own use, and you can pretty well settle for anything you want. In particular, I’ll show you just one design, and it will be adaptable to any configuration that you want: a single landing light; a separate landing and taxi light; two landing, no taxi; two landing, one taxi; and so on. Just remember that you are going to spend about $50 per light, and each light has nine individual LEDs inside.

With nine individual LEDs inside the light, running 700 mA through each one, and with about a 3-volt drop for each individual LED, if we run them all in series, we will need a 27-volt power supply with current limiting. That automatically calls for a switching circuit type of supply, and we said once before that we don’t want to run switchers because of the noise factor. What we can do is buy the light configured in three rows of three LEDs each row, and that can be run directly with a linear regulator from a 12-volt supply. True, there will be the cost of two more LM317s, but at about a buck apiece (plus another dime resistor), we’ve solved the noise problem elegantly.

One of my first thoughts was to use a single 3-amp linear regulator set for 2.4 amps and run all three strings in parallel, 800 mA to each of the three LED strings. That was a pretty foolish idea. If one of the three strings were to fail, the regulator would still supply the 2.4 amps to the remaining two strings, 1.2 amps to each string. That would quickly burn out one of the remaining strings and force the whole 2.4 amps into the last string. That last string would get real bright for about two seconds and fail the entire light. Better that we spend the extra two bucks on individual string regulators. 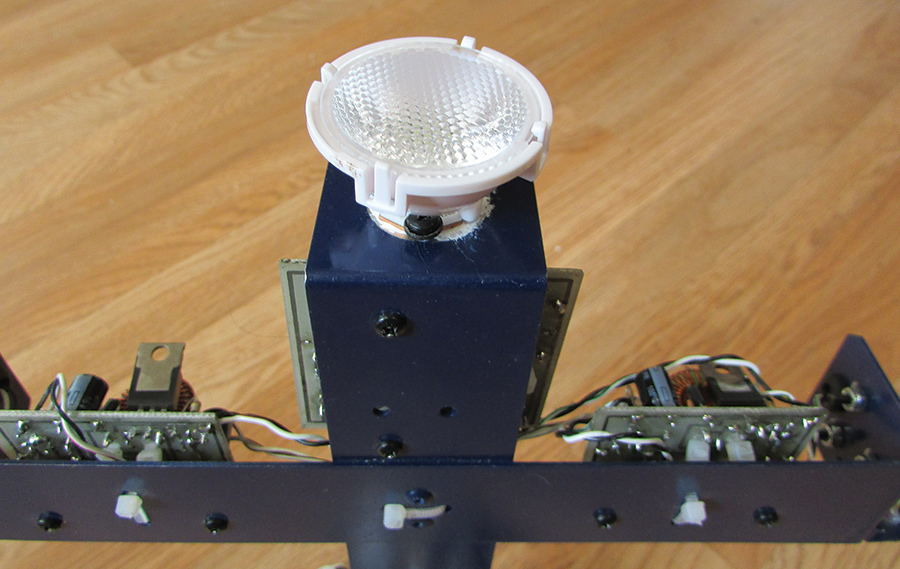 The 17 lens mounted on the landing light LED.

Let’s worry about regulator power for just a minute. If we say that the maximum voltage that the aircraft bus will have on it is 14 volts, and that each LED string will drop 9 volts at 700 mA, then the regulator will be dissipating (14 – 9) x 0.7, or about 3.5 watts. That’s not a tremendous amount of power (with excellent heat sinking, the LM317 can dissipate over 30 watts), but it will get warm if we don’t put a minimal heat sink on it.

What we may need to think about is how to mount the LED itself to get rid of heat. We have 9 LEDs in the package, each one having about 3 volts across it at 700 mA. That’s 2.1 watts each times 9, or just a little less than 20 watts. That’s a bunch of heat you need to get rid of, and as I’ve said for some time now, aluminum airframe structure is your friend.

One of the advantages that an incandescent light has over a bare LED is that it can sit at the bottom of a parabolic reflector and shine its light in a pencil beam. One of the advantages of an LED is that it runs cool enough to be able to use a plastic lens over the LED to focus the beam. By changing the optics of the lens, we can make it a flood, a flood-spot, or a spot beam (33, 26, and 17 beamwidth respectively). Cost? About $6 per lens. Attachment structure? Glue.

If you will give me a little time (say, two or three months), I’ll see if I can come up with a trick circuit that will let you turn the lights on without a flasher, turn them on with a flasher, and turn them off—all with a single switch, a single wire, and an airframe ground.

We also have to talk about the optional annoyance flasher circuit itself. Note that for clarity in both the April and May issues, we did not include the flasher. I’ll give you the schematic and comments for both the nav lights flasher (which sounds like on-off-on-off-on-off several times a second) and the landing light flasher (which sounds like on……off……on……off, about a flash a second) in the single-switch issue.