The Experimental airplane world is indeed vast. It encompasses a wide variety of flying machines—from those that simply float on the wind to those that traverse the near regions of space. All of this challenges those of us tasked with trying to keep it all straight and categorize the machines and powerplants that people use to leave the surface of the planet.

This month, for example, we present the first of two parts of our annual look at engines. First off, we’ll apologize for excluding rockets and turbine powerplants. We all sometimes get a little tunnel vision and focus on the core of our market, which is probably using reciprocating engines 98% of the time. If anyone wants to help us understand the market of turboprops, turbojets, and rocket-powered craft, we’d love to see an article on what is being used in the Experimental world. But sorry, no kerosene burners will appear in these guides.

All joking aside, this year we decided to classify our powerplants a little differently than in the past, although the difference will probably make intuitive sense to most. We used to present “traditional” engines in one part of the review, and “alternatives” in another. Traditional engines pretty much were limited to those from Lycoming and Continental (with a few Franklins thrown in for good measure). But the market is changing. For example, Rotax—formerly considered an alternative powerplant—now powers more new flying machines throughout the world than many traditional engines. And it was designed from the start as an aircraft engine.

Therefore, we are now thinking of the engine market in a simpler fashion. We are once again splitting it into two halves. This month, we’ll look at engines that were purpose-designed to be aircraft engines—regardless if they are from old, established companies or new start-ups just coming into the market. If it was designed to be an aircraft engine, it is no longer alternative; we simply have to recognize the changing world.

The second part of our annual look at engines will appear next month and include what we will call conversions—engines which were originally designed to power cars, motorcycles, boats, and what-have-you, but have been repurposed as aircraft powerplants by ingenious inventors and experimenters that like to look at the world a little differently. Now, many would be surprised to find that a number of these converted engines look so much like a purpose-built aircraft engine that it is hard to tell the difference. Personally, I think this is because the car guys borrowed the idea from the airplane people a long time ago. But be that as it may, those who like to march to a different drummer and truly embrace the word “experimental” when it comes to powerplants will find what they want in our next issue.

All of this discussion simply points out the danger of using the word “conventional” in anything we do in the Experimental world. Experimental means that our world is wide open, and we need to keep our minds similarly wide open. For instance, to many of us old-timers, conventional gear means that the little wheel is in the back. For folks who have come to aviation in the last few decades, the conventional configuration has the extra wheel in the front—and all of the old farts are flying taildraggers—a weird throwback to the days of tall tales and groundloops. But wait, there are other groups out there in that far field playing with bicycle configurations, or even four wheels. Why not? What is conventional today might be old and quaint in a few more years.

Instrument panels continue to change just as rapidly. It wasn’t long ago that conventional meant having a lot of round dials in your cockpit, while a few folks were experimenting with fancy glass panels. Now, I would venture a guess that, with the proliferation of glass, the majority of new projects are eschewing “steam gauges” (those antique round dials) because glass is both cheaper and more reliable. The convention is changing once again.

So keep an open mind and embrace the changing world of conventional. After all, we are all in this world we call Experimental for a reason—we want to see over the far horizon to find or do something new. We’re not sure what we’ll find, but we can predict that what we consider conventional will always change. 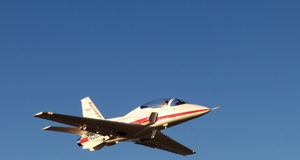 Amy Laboda - January 18, 2010
0
Amy Laboda's Kitfox 4, Little Bird, won't break any speed records. But it will tuck nicely into a short turf airstrip in time for a barbecue.