In my March 2018 column [“Spread Those Sheets“], I gave you a wire table spreadsheet that allowed you to select a wire gauge for your homebuilt aircraft given the current you needed to draw and factored in the wire temperature and a lot of other elements. Now it is time to put an overcoat on that bare wire and select the external covering or insulation for that wire. Fortunately, modern chemistry has given us a wide variety of options from which to choose. 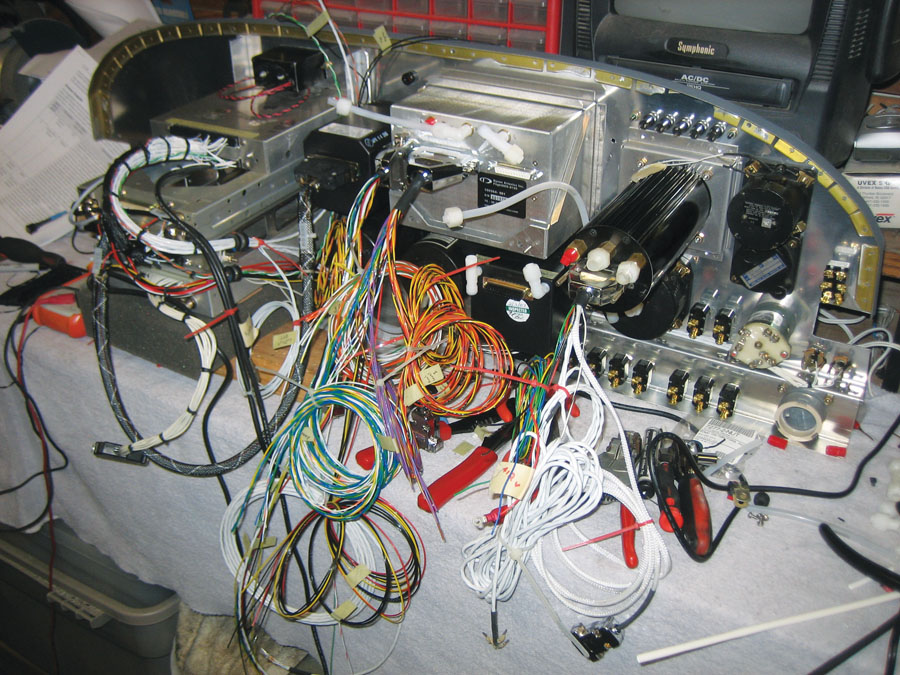 Mil-spec wire isn’t just for military aircraft. It’s the only kind of wire you want to use in your aircraft, too.

Let’s roll the calendar back nearly 70 years to when Uncle Miltie (Milton Berle) was all the rage on that new-fangled invention, the black and white TV set in the front room. Ask anybody who was around at that time, and (s)he will tell you that the only wire to use on an airplane was double-wrapped cotton, impregnated with a varnish, and covered with a thin nylon outer film (“DCC”). My particular bird right now rolled out of Clyde Cessna’s Wichita build-it hangar in 1958 with just a little over 300 yards of the stuff—and yes, just for the record, I measured it when I completely rewired the blue-on-blue 182 when I bought and restored it in 1990.

That’s over 28 pounds of wire, and completely rewiring it with modern stuff took less than 8 pounds, saving 20 pounds of payload…or, if you like, well over two dozen cans of beer.

Shortly thereafter, some smart chemists took several isotopes of that newfangled vinyl plastic, treated it with chlorine and came up with polyvinyl chloride, or PVC for short. It didn’t burn like cotton, it didn’t weigh like cotton, and you could have it in any color of the rainbow you wanted—and some colors that weren’t even in the rainbow. You could easily mold it, extrude it, make it as thin or as thick as you wished, and even dip wire in it when liquid, and it would conform to the shape of the wire. Wow, what an improvement.

Sort of. While PVC has been rumored to give off toxic gases when it burns, you might want to see a scientific study of what temperature you have to get this plastic to in order to produce those gases… here you go.

So, yes, I’m going to suggest that those of you that sprung for a 1000-foot roll of Tefzel, figuring that you’d be asphyxiated if your PVC wire got too hot, are flying around with stuff heavier than the 1940s era DCC I took out of the Cessna some 30 years ago. And while the Tefzel will stand up to blowtorch flames, unfortunately, you will not.

Having said all that, what is wrong with PVC? It doesn’t burn at relatively low temperatures, but it melts…and gets runny…and lets wires touch when it melts away from its wire center. And it is horrible when it comes to resisting fuel, oil, or any hydrocarbon like brake fluid. Absolutely horrible.

For nearly 30 years (1960 to 1990), we coated our PVC airplane wire with a hyper-thin coating of nylon (say, roughly 1 or 2 mils thick) that was superb for hydrocarbon contamination and was a pretty tough abrasion material. Thus was married PVC to nylon in the industry-standard aircraft wire, MIL-W-5086 or 7078. It was used on everything from the venerable straight-tail Cessna 150 to the early space capsules.

Even more popular than plain old 5086 was 5086-Type-II, which featured a very thin (5 mil) fiberglass braid between the PVC and nylon. Now we had a real aircraft wire that wouldn’t burn with a torch, was resistant to fuel and oil, fairly inexpensive, easy to work with, and chemically fairly nonreactive.

Unfortunately, we now have to do a reality check. With all these layers of plastic, nylon, and fiberglass, we got back to something that was bulky and heavy. Sigh. To boot, you could have any color of 5086 you wanted, so long as you wanted only white.

So, for those sorts of things that are on the people side of the firewall and aren’t likely to encounter any fuel or oil, the military gave us plain old MIL-W-76, which was plain old PVC over copper wire, in all the colors of the rainbow, light, easy to work with, and you could actually put stripes of a second color over the base color if you wished. This gave us a mil-spec wire for our airplanes that met our needs.

Over the years, we’ve had versions of MIL-76 with fiberglass covers, coaxial cable out of PVC, and lots of other options. However, 76 has one nasty tendency that we’ve already talked about: It doesn’t burn easily, but it melts like ice cream at the Oshkosh airshow.

Back to science: Some bright, white shop jacket found that if he nuked the MIL-76 wire (irradiated is the proper term), the plastic would no longer melt, but just curl up and go away. This spawned a new mil-spec and gave us the standard that exists to this day—MIL-W-16878 for a plain, lightweight, irradiated PVC-covered copper wire that doesn’t melt.

We had been making another plastic that was really nice for coaxial cable for quite some time that didn’t have all the nice capabilities of PVC, but was instead treated with the same stuff we use to make high-test gasoline: poly-ethyl-ene (polyethylene). It is very low loss at very high frequencies, so coax cable is made of a copper center conductor, a polyethylene insulator, a copper braid, and a black outer jacket of irradiated PVC.

Polyethylene is pretty poor in the heat and flame department, so in the early days of the space program, some bright chemist decided to try and blend four fluorine atoms into the ethyl ring in polyethylene, giving us poly-tetra-fluoro-ethylene (polytetrafluoroethylene), which was immediately shortened into “Teflon.” All the manufacturers of MIL-W-16878 jumped onto the Teflon bandwagon and brought out their versions of 16878 Type E with Teflon insulation.

Teflon wire is impervious to nearly everything known to man, including gasoline, alcohol, flame, ketones, ace-tone, ethylenes, and I suspect that termites can’t do much damage to it either. That’s the good news. Most of us who have hung upside down in small spaces working with Teflon wire know the bad news from first-hand experience—it is crystal witch to strip, even with professional ratchet-style cutter-strippers. The only thing that works well is a hot-wire stripper that just barely melts the wire with a red-hot cutter, leaving hotter-than-the-hinges-of-Hades stripped Teflon burning a hole through your cotton shirt. Or the aircraft carpet.

The other bad news is that it is stiff and difficult to bend into nice tight corners, it is heavy, it is expensive, and it only comes in whatever shade of white you prefer.

Teflon was invented by one of the big chemical companies (DuPont), and they weren’t about to give out the trade secrets on how to make it, so some other chemical companies came out with their own version of the stuff. For those of us weaned on the Gilbert Junior Chemistry Set, we all know that an ethylene—fluorocarbon plastic polymer—was christened Tefzel. The military liked the stuff so much they created a new MIL-W-22759 category for it.

Tefzel has exactly the same good stuff and the same exact bad stuff that Teflon has going for it. Exactly the same. It is expensive, heavy, and a witch to work with. But it is nearly indestructible.

What do I personally do when working with a (re)wiring situation? 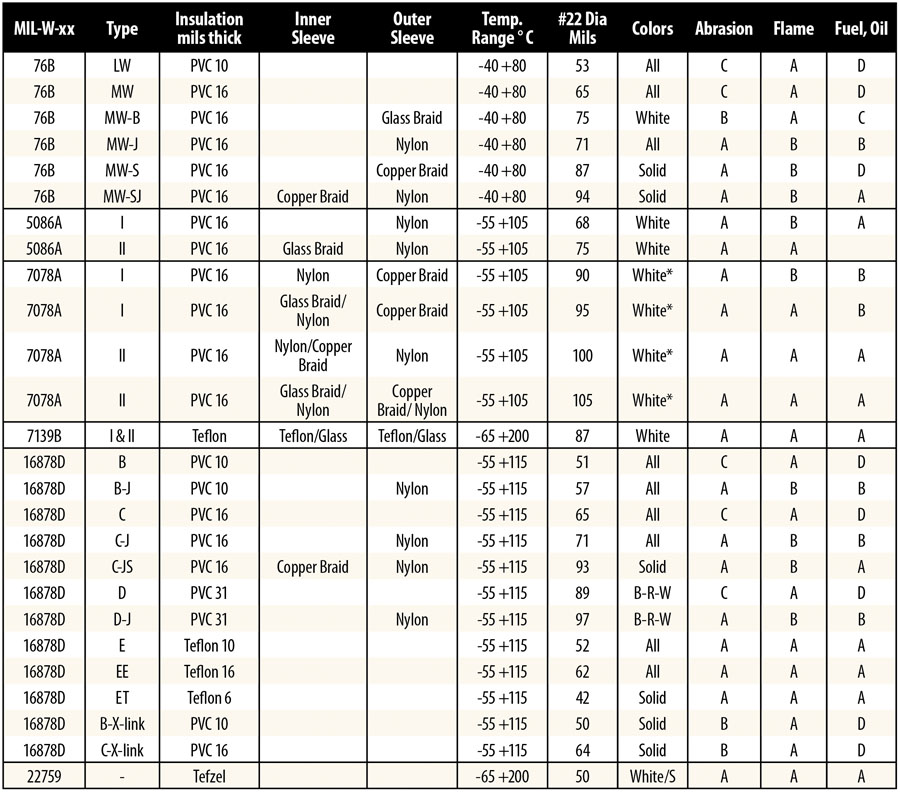 Notes:
• There are literally thousands of mil-spec wire varieties. The above are the most common generally available for light aircraft use.
• Size is the outer diameter of the insulation in mils ( 1 mil = 0.001 inch).
• Colors
– All means all 10 solid colors (black, brown, red, orange, yellow, green, blue, violet, gray, white). Some vendors have the capability of doing any solid color with a stripe of another color. Some vendors can only do a stripe on white.
– Solid means any of the solid colors but no stripe.
– *White is used for multi-conductor cable where the individual wires are white with a color stripe(s) to distinguish the wires.
– B-R-W means that the wire comes in black, red, or white.
– WH/S is white with a color stripe
– Grades for abrasion, flame, fuel and oil are the usual A-F grades, just like school.

Where to Buy Wire

At this point in most of my columns, I point you to a source for the parts to build my ideas. In this case, I don’t have a particular source for aircraft-grade wire. What I will point out is that most cities that have some sort of military base or civilian aerospace industry will have “Honest John’s Surplus Emporium” that sells mil-spec wire at a tenth of the price you pay for that same wire new from a distributor. The aforementioned Cessna 182 was completely rewired for less than $50 with mil-spec wire throughout from John’s place.

So, how do you test Honest John’s wire? Strip a small end of it. If it is copper colored, it is uncoated copper, and unless you want to pull it all out in a dozen years when it corrodes on you, pass on it. If it is silver colored, dip the wire into a very diluted (about 100:1) solution of water and battery acid. If, after a day of drying out, there is a black coating (silver sulfide) on the wire, you have silver-coated wire (lucky you), and if there are no black specks or coating, you have tin or solder-plated wire, which is just fine.

As for the insulation, take a sample of it and lay it across a hot soldering iron. If it immediately melts and runs, you have un-irradiated PVC. If it just curls up and deforms, it is irradiated PVC (no, it will not trigger a Geiger counter; it is not radioactive). If it does nothing, burn it with a match. If it still does nothing, it is fiberglass, Teflon, or Tefzel. If it flames up immediately, it is either cotton or nylon over cotton.

Rarely do I tell you not to use the aviation department of Honest Ed’s Auto Parts Store, but in this case I will do that. Most auto wiring you get from them will be solid copper, not stranded. Same for house wiring using Romex. Solid copper doesn’t cut it for airplane wire. I prefer 22-strand but will accept as low as 7-strand for aircraft wiring. There’s too much vibration in an aircraft to go with solid wire. Way too much.

Finally, I want you all to be aware of the overriding military specification that we all work to as best we can—MIL-TDD-41 (Make It Like The Damned Drawing For Once). Later, until next month…Until then…Stay tuned…

Larry Anglisano - May 20, 2016
1
The Experimental market gets few breaks when it comes to transponder and ADS-B requirements.

Bryan Quickmire - March 17, 2009
0
250 enthusiasts gathered at Erie Airpark, in Illinois, to celebrate a major milestone: The 25th anniversary of the Quad City Challenger line of aircraft. By Bryan Quickmire.