If you are of the belief that the “E” has gone away from Experimental aviation, you owe yourself a trip to Reno, Nevada, in September. The National Championship Air Races are scheduled this year from the 10th to the 14th, and it doesn’t take much time spent wandering around the pits to renew your faith in the creativity of true experimenters. Whether you are looking closer at the changes made to a P-51, or taking a break from the sun in one of the Sport Class hangars—admiring the latest in Lancairs, biplanes, or the venerable Formula 1 racers—you’ll see ideas that might very well make your own aircraft better. 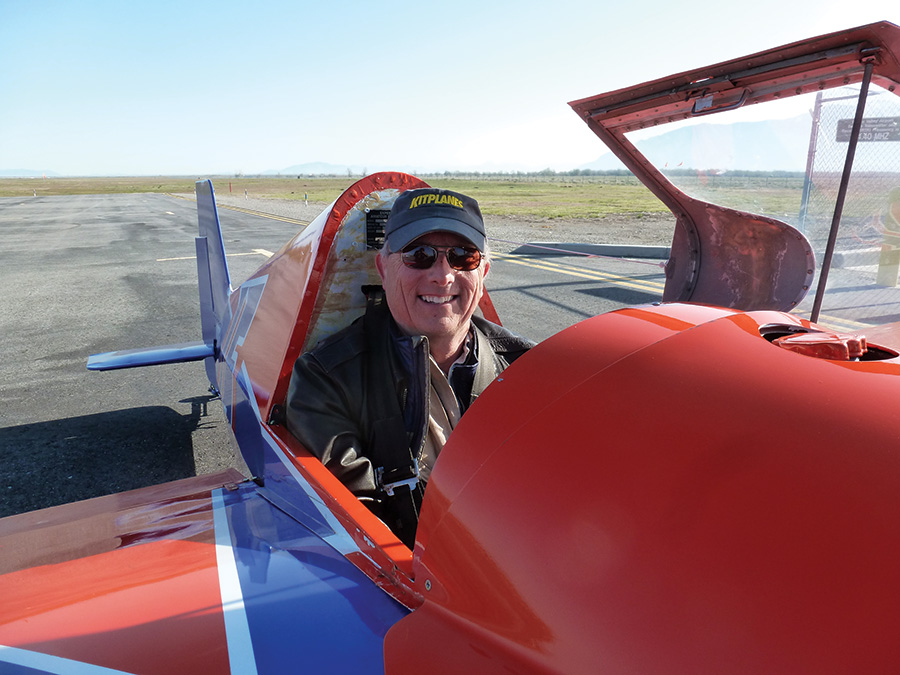 Flying the Cassutt is a thrill—even without the pylons, the feeling of speed in the tiny airplane is enough to bring a smile to the pilot’s face.

This month, to get you in the spirit of the race season, we feature a review of the classic Formula 1 race plane: the Cassutt 111M. The Formula 1 class offers mere mortals (with mere mortal checking accounts) to go out and explore the challenge of speed without having to spend a king’s ransom to play with the big boys in the Unlimiteds. Powered by Continental O-200 engines (many of them pulled from equally venerable Cessna 150s), these simple machines offer loads of opportunities to tinker—with aerodynamics, cooling, induction systems, and handling qualities. The owners, pilots and crews clearly enjoy the atmosphere of competition as much as they like to find out what tweaking an oil cooler duct will do.

In April, I attended the Mojave Experimental Fly-in, a low-key gathering of high-key experimenters looking to build high-performance airplanes, go fast, and do it all on less fuel. There I saw some of the fastest Lancairs and custom one-off airplanes that will compete at the high end of the Sport Class at Reno this month. These high-performance machines offer hints for homebuilders without the means to feed Lycoming O-720s—a close look will show interesting gap seals, taping techniques for seams and doors, and lots of little details, like seals between the blades and spinner openings on a constant-speed prop. How much did that airplane gain with those seals? I don’t know, but I bet it didn’t go slower! I recommend walking around with a camera to help remember the good ideas that you see. 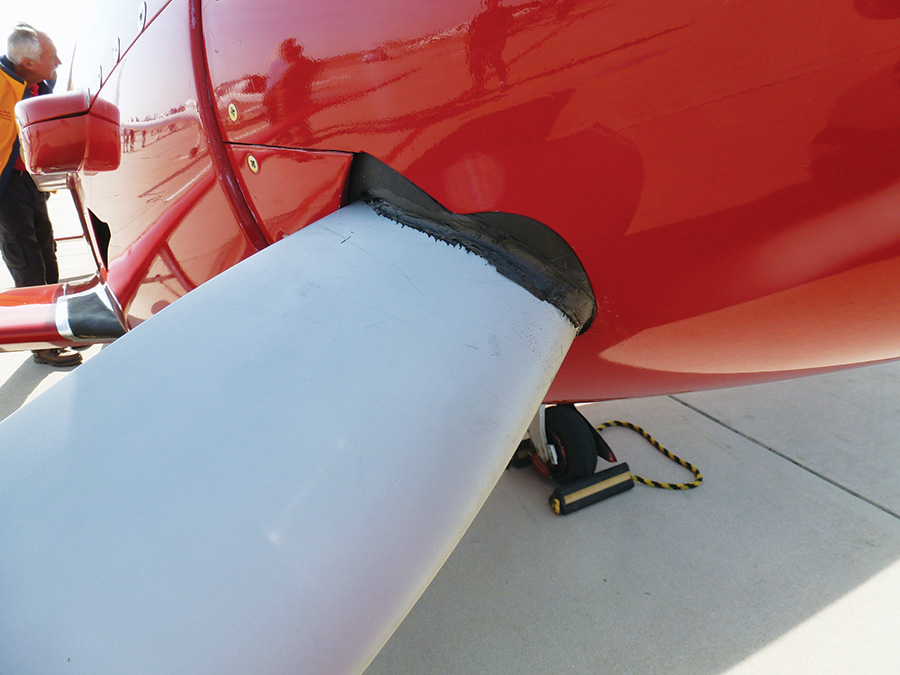 How much speed is gained by adding these seals to the prop/spinner gap on this go-fast machine in Mojave? The owner wasn’t saying—but you can bet he knows!

But don’t limit your inspection to airplanes in the homebuilder’s class. The Unlimiteds are built and maintained by human beings with sometimes simple, downhome hunches and ideas. In June, I dropped in on the home of Voodoo, last year’s Unlimited champion. Tucked away in a large hangar at Yolo County airport in Northern California, just a short flight from the race mecca of Nevada, Voodoo looked like a medical patient undergoing open heart, brain, and cosmetic surgery, all at the same time. Engineless (but surrounded by parts for at least two racing motors and a couple of other spares), it looked to be getting a good going-over for signs of stress from the previous season. Flaps were hanging disconnected from their actuators, access panels were removed and hung on racks all over the hangar, and new carbon-fiber cowling components were being lovingly fitted and adjusted. This wasn’t an airplane—it was an airplane kit, partially assembled. Bigger than the average garage project, but familiar just the same.

I noticed several parts that might have passed a casual visual inspection with big red Sharpie marks saying, “Crack here—do not use!” Looking closely, sure enough—there was a cracked web on a supercharger drive gear, and over here, a tiny, tiny start of a crack on a valve cover. As was sadly demonstrated by the tragic crash of The Galloping Ghost in 2011, no part is too small to be inspected, serviced, repaired, or rejected. A pair of mechanics were going over the airplane and engines the day we were there, slowly working their way through the process of getting her ready to go. 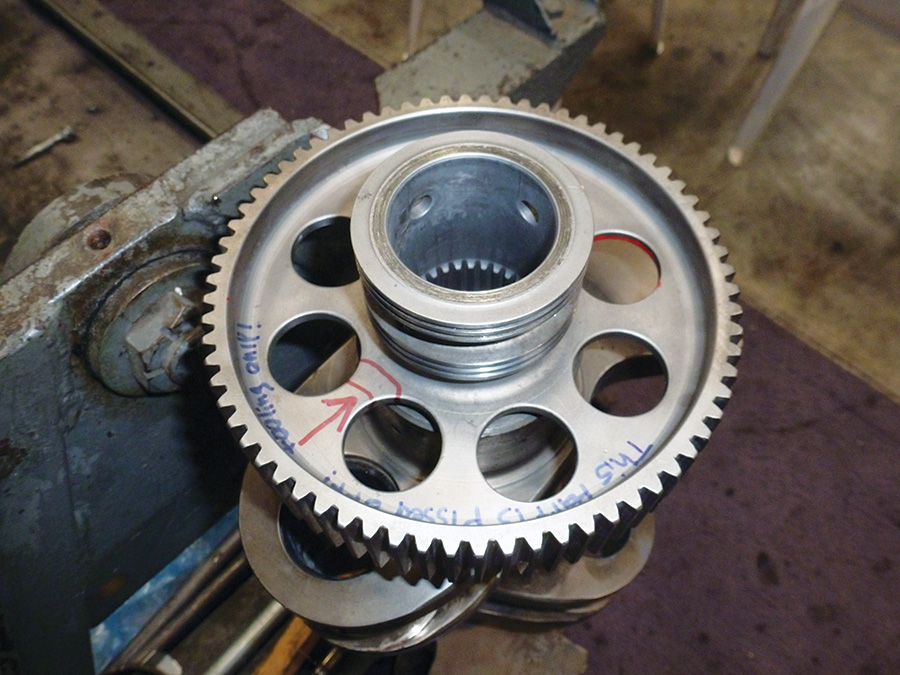 See the crack in that gear? Many would have missed it. Careful inspection is a good lesson homebuilders can learn from the racing crowd.

“You’d be surprised,” one of them said. “By a simple adjustment to XXXX [no, I am not going to be responsible for giving away their secrets], we gained 21 miles per hour—just like that!” And you know, that stock radiator inlet was sized to cool the engine at 350 mph. “When you’re going over 500 miles an hour, you end up getting a lot more molecules of air through the radiator than you need—so we’re working on the idea of finding the perfect size—or maybe even a variable size, for different speeds. Of course, that means the exit area has to change as well…” I was surprised to see a little stick-and-ball transponder antenna mounted under the tail, just behind the tailwheel. Heck, it’s been a long time since I actually did any true aerodynamic calculations, but I do remember that a faired blade has lower drag than that—at typical recreational speeds! I didn’t get a chance to point that out, but I suspect someone on the team will look at it and say, “You know, we could lose a little drag here…” 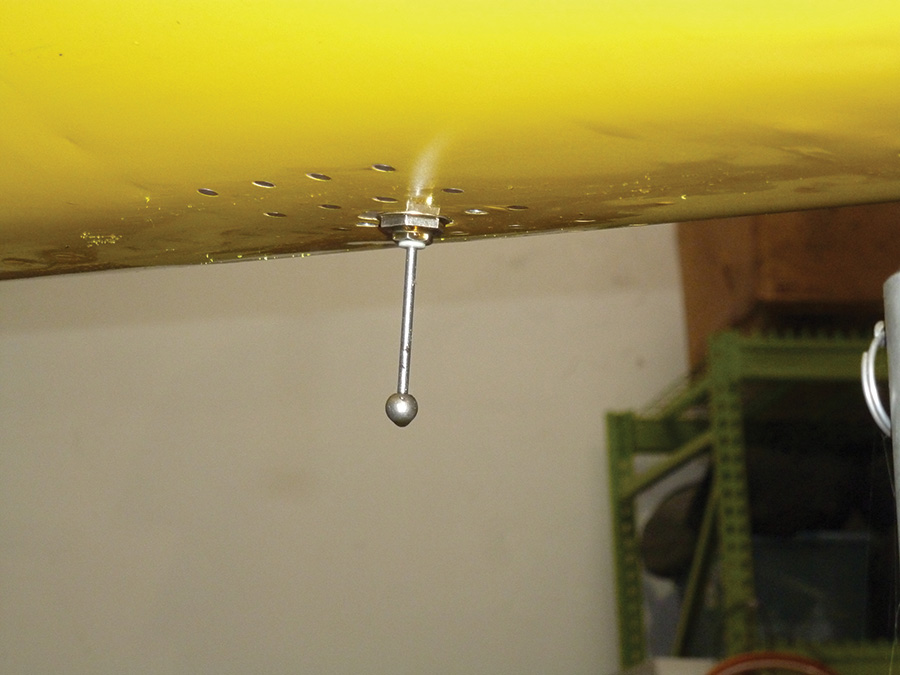 How much faster could Voodoo go with a low-drag transponder antenna? We don’t know—but we’d like credit for the idea if they change it and go faster!

Racing anything—cars, boats, airplanes, or bicycles—has always improved the breed, sometimes in ways that the racers didn’t anticipate. Many safety enhancements come from racing, and lots of great ideas are sparked by seeing someone else’s curiosity at work. Reno is a hotbed of curious ideas, and some of them I store away in my design grab bag for some future project. Even though most of us will never race, Reno is a great place to absorb the lessons of others—just like a week in Wisconsin in July, or a few days in Florida in April. Different shows, different emphasis, different lessons.

No matter what you’re building, learn from the experience of others. As you read this month’s issue, enjoy the thought of racing a Cassutt at Reno. It’s got its plusses, it’s got its minuses, and I don’t think I’d like to make it my daily cruiser. But for an airplane with an O-200, it goes like scat, flies low—and turns left.