Do the names Melody, James, Emily, Brian, Don, Jeremy, Braden, and Jarius mean anything to you? They mean a lot to me, as these are some of the firefighters and victims of the 6000 wildfires that occurred in California in 2018, the worst year on record.

The year really started out great. I was hoping last winter that my rain gauge here a few hundred meters south of Grass Valley Intentional Airpatch that reads to 99.9 inches of rain would overflow. I was curious what would happen. As it turned out, the rainy season stopped about three tenths of an inch short of that goal, but when the rainy season stopped, the brutally hot summer started about three weeks later—just in time for that 8+ feet of water to germinate all the tall grass and weed seeds that accumulated in the last three years of drought. Then the winds dried out the grass, and then came the fires. 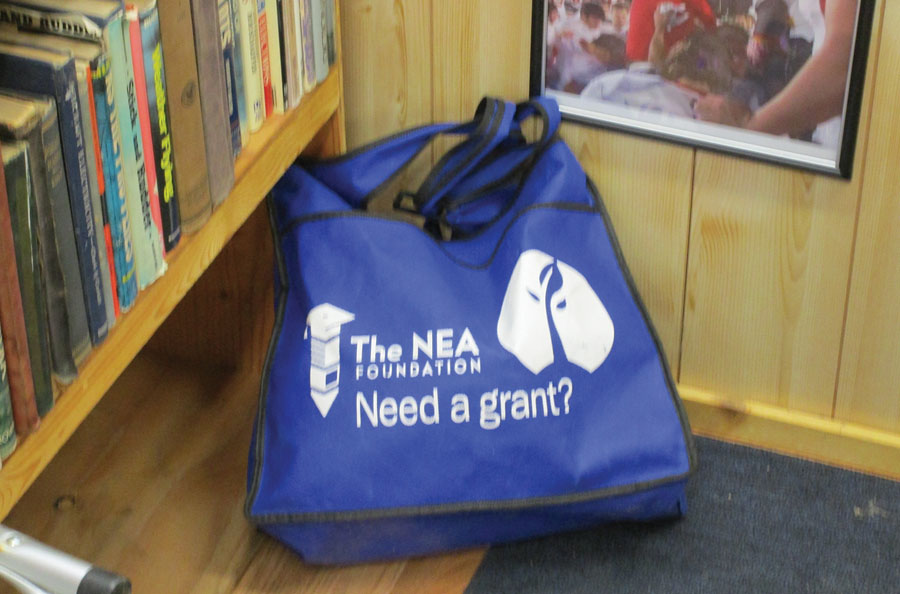 The go-bag in the corner by the door, always loaded and ready to go.

Most of us who live in the Sierra foothills keep a “go-bag” somewhere in the house. When the bell dings and the evacuate now orders come, we grab that go-bag with our insurance papers, wedding license, wills, irreplaceable pictures of grandma, and other mementos of our lives and get the hell out of the house…along with the cats, dogs, birds, rabbits…hurriedly scooped into the waiting cages. Houses can be replaced; the important stuff cannot.

Cyndi and I have a deal. She gets the house go-bag and the pets. I get the radio go-bag and the radios. I’ve spent time being the radio officer for the Coast Guard Auxiliary, the Humane Society, the County Deputy Sheriff Search and Rescue, the local radio station, and the County Emergency Services. One thing is sure: One or more of them will have some impairment of their normal communications channel(s) and it is always, “Jim, how long would it take you to set up a mobile radio station?” My answer with the radio go-bag is always the same: “About half an hour, or maybe a little less.”

The S2s getting ready for a fire. The red stuff you see them dropping is actually a retardant made of ammonium phosphate that smothers the fire, and then when it dries, it is a fertilizer to help the burned areas revegetate.

Actually, I keep two antennas in the go-bag—an aircraft band antenna and a 2-meter amateur band antenna. Why separate antennas? Because the normal “rubber duckie” has a range approximately one-tenth that of a plain-old ground plane antenna. If the range with a regular antenna is 20 miles, you will be lucky to get two miles with the duck.

I also keep a 12-volt gel-cell and charger. I try to keep the gel-cell charged at all times, but the flesh is sometimes weak, and the battery gets charged when I get to the evacuation center.

With a minimal amount of equipment, I can quickly set up a radio station either in the aviation band or in the amateur radio 2-meter band. And how will the station be used?

As I said, I live a football field south of Grass Valley Airport (KGOO). When any disaster hits up here, I can help any of the out-of-town news media that come up in their company airplane and use a legitimate disaster air-to-ground frequency to guide them to where the hot spots are.

“Where is Lake Wildwood?”

“How do I get to Alta Sierra from Nevada City?”

“See that big lake just south of you? Go to it and turn right to 240 for about five miles.”

This isn’t on the Unicom frequency and not on the fire tanker frequency. Those are legitimately used for truly emergency aircraft, but on the legitimate disaster channels (see Code of Federal Regulations [“CFR”] Part 87, Sections 87.371 and 87.393 for guidance on frequencies available in an emergency condition. I prefer 123.1, but your situation may allow other frequencies.)

How about amateur (ham) radio? How does that help? Most communities have what is called ARES (Amateur Radio Emergency Services). In most of the ARES groups, you have really sharp folks who can make their little handheld radios sit up and be useful…and in most places there are dozens of them that are there to help.

ARES are not going to go in and get into the firefight with the first responders. ARES are the rear echelon that takes care of such things as staffing emergency shelters and coordinating evacuation folks into the right location. Here’s an example:

“CQ, I’ve got an evacuated mother here in Nevada Union High School gymnasium whose kids were evacuated from their school. Mother’s name here is Mary Jones. Anybody got any kids there whose mother is Mary Jones, over?”

“Nevada Union, we’ve got Brett and Kelly Jones over at the fairgrounds, and they want to know if their mother is OK.” 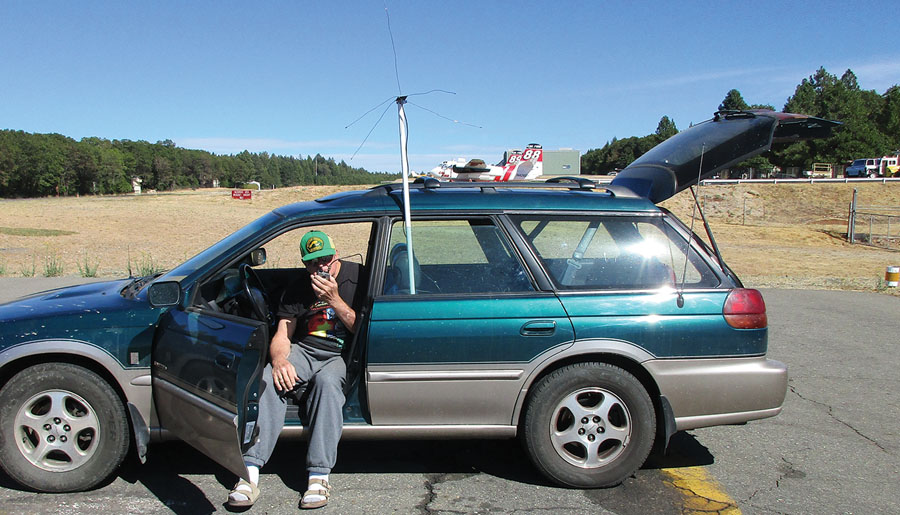 A typical airport setup for emergency communications at KGOO. The antenna is fastened to a PVC pipe and held in place by the left rear window. In the background you can see the S2 fire bomber aircraft

Romex wire and scrap aluminum are your friend. Make it cheap because at one time or another it will be time to abandon the cheap antenna, throw the expensive radios into the car and skedaddle out of the way with no time to tear the setup down. Or, after a couple of dozen deployments and wrapping up when done, metal fatigue will get that copper wire, and you will be making another one. 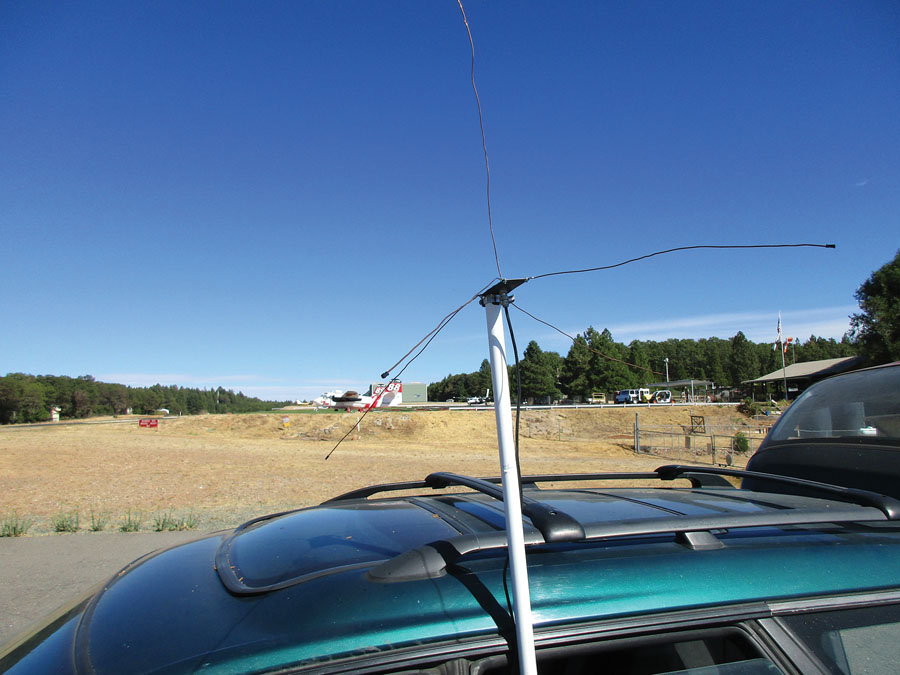 Close-up of the antenna. This one is around ten years old and about ready for a rebuild.

The radiating (vertical) element is soldered onto a plain-old panel-mount BNC connector, and a hole is drilled into the center of the small plate to mount the connector. Ground radial wires are soldered to ground lugs and mounted on the four corners of the plate. Total assembly time is less than 5 minutes. For the aircraft band, the radiating element is 22 inches long, and the ground wires are 23 inches long including the distance from the ground lug hole to the center of the radiating rod hole. For the 2-meter operation, these lengths are 19 inches and 20 inches respectively. 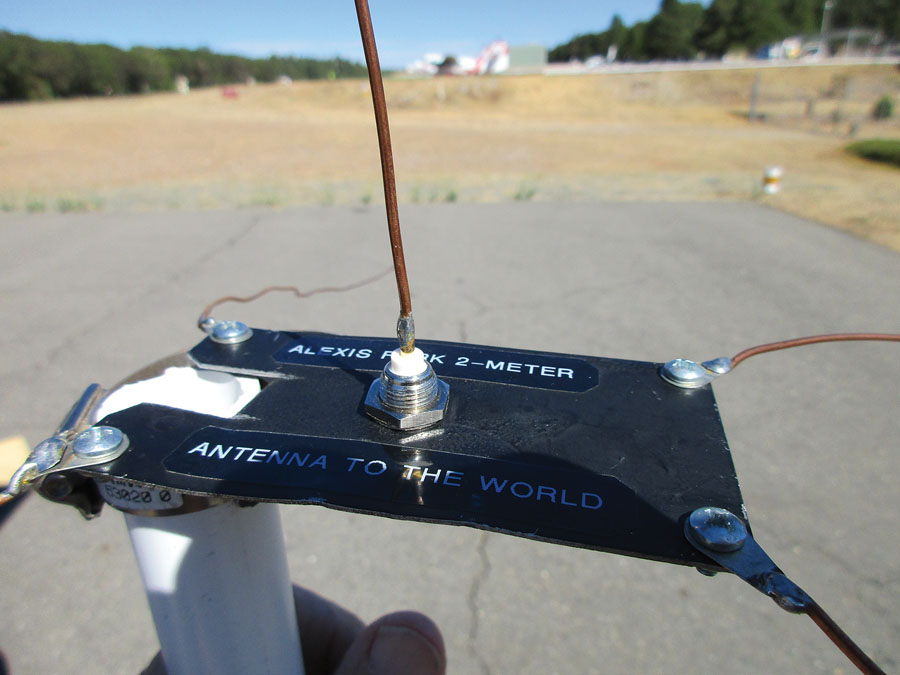 Close-up of the construction detail of the vertical radiating element, the four horizontal ground plane elements, and the black aluminum mounting base.

The small aluminum antenna mounting plate has a tab cut and bent down on one end so that the plate can be affixed to a mounting pole with a regular old radiator worm clamp. 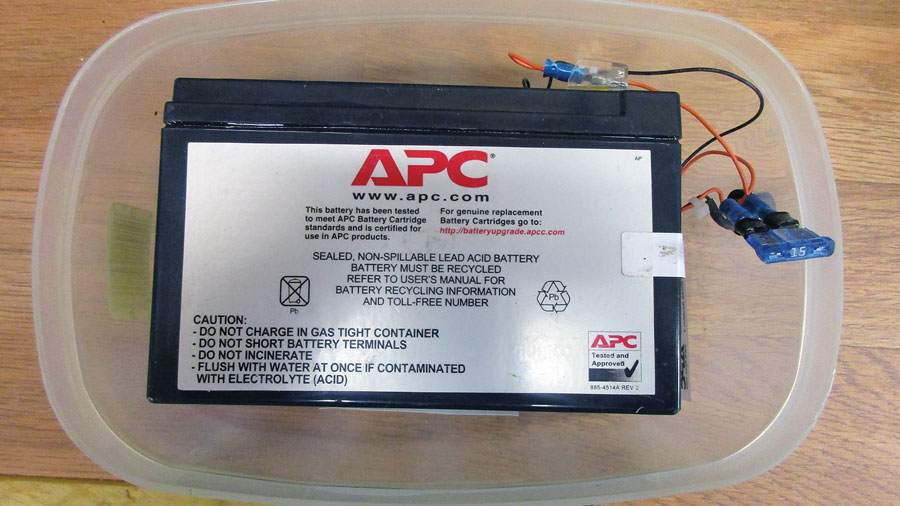 The gel-cell battery for extended operations. Note the fuse. Elsewhere in the go-bag is a five-pack of replacement fuses.

How big a 12-volt gel-cell to bring to keep the handhelds going past their internal battery life? The one in the go-bag is 8 amp-hours. On the average, the aircraft band handheld (Vertex VXA-700) uses 100 mA, and the amateur radio handheld uses 50 mA. This gives me roughly 80 hours of continuous operation on the aircraft band and double that (160 hours) on the ham band. Three days and change for aircraft and six days on the ham bands, 24 hours a day. The charger is the one that was featured in “Harbor Freight leads the charge!” in the May 2018 issue. Wonderful little device and nearly bulletproof. 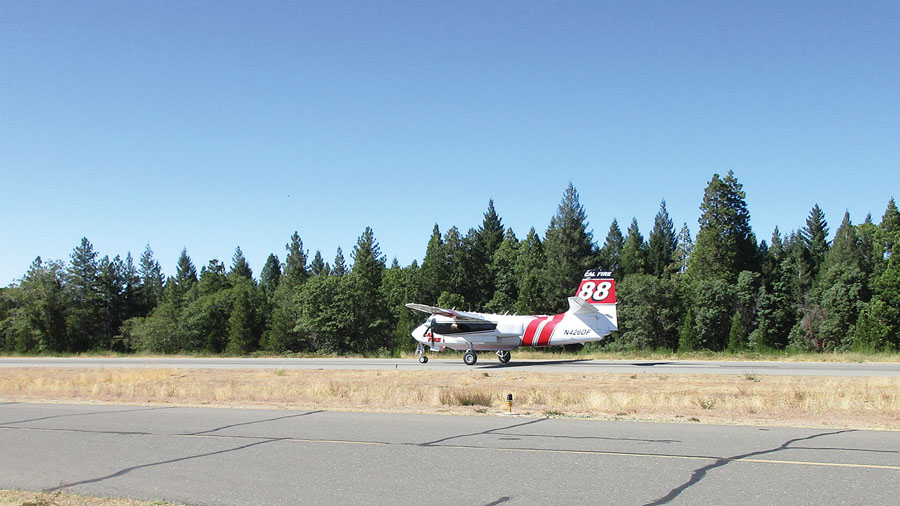 Old 88 departing for a fire about 10 miles south of KGOO.

As I write this in early September 2018, most of the California fires are contained, but my colleagues in the Carolinas are grabbing their radio go-bags and getting ready for hurricane Florence to hit. My best wishes for all of you working these disasters.

See you next month. Until then…Stay tuned…

Jim Weir - October 17, 2008
0
In this first of a two-part series, Jim Weir builds a low-cost, high-efficiency portable ground-based antenna system that he used to great effect in the recent CAFE 400 (fuel efficiency) race in Northern California. You can do it, too.

Jim Weir - December 17, 2008
0
This month, we look at how an airspeed indicator works and rig up a simple calibration tool for it;