If you want to compete with Rotax and the popular 912, you need a hook, something to set you apart from the Austrian juggernaut. The UL Power engines, now two of them, certainly have one-in the form of FADEC. Full Authority Digital Engine Control offers the potential for more efficient engine operation and reduced pilot work load. More power thats easier to control. Sounds great, but who are these guys?

UL Power was formed in 2006 by four partners in Belgium. Three of the partners are Nicolas Josson of ROPA.BE, a state-of-the-art metal turning and milling company, and Lionel and Pascal DHondt, a father and son team who own DR Tuning in Belgium. ROPA.BE makes the parts and the DHondts, who have more than 30 years of engine building and tuning experience in the motor racing arena, are in charge of the electronic engine controls and engine assembly tasks. The principals of UL Power were pulled into the light-aircraft-engine world when a light helicopter designer in the EU wasn’t satisfied with the power output of the engine the design had been built around. Attempts to upgrade the engine proved fruitless and the helicopter design was dropped.

This experience led the UL team to take a look at the existing engines on the market. They concluded that the combination of the DHondts experience in developing and building racing automotive engines and ROPA.BEs metalworking capabilities provided them with the talent to build a better engine. They founded UL Power in 2006.

When we last looked at the UL Power design in 2007, there was just the one version, but the lineup has been growing. All UL Power engines share some important architecture-four opposed, air-cooled cylinders and direct drive, no gearbox.

The 260iSa is equipped with a dry sump oil system and is designed for aerobatic applications. The Twister Duo aerobatic team has installed these engines in two very light single-seat Silence Twister aircraft for aerobatic shows in the British Isles. 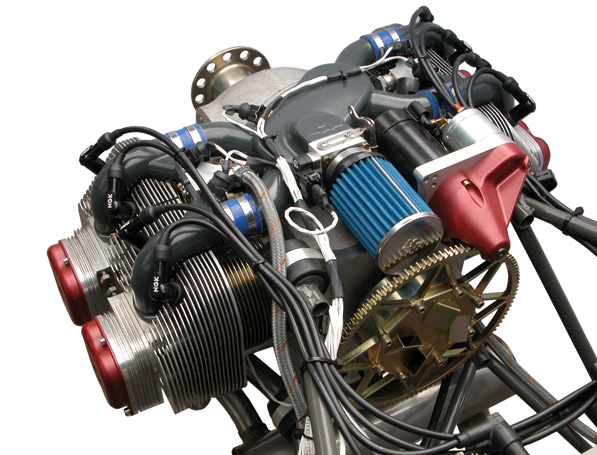 Unique to this end of the powerplant spectrum is FADEC. UL Powers was integral to the development of the engine, and its a standard feature.

The single-piece, non-counterweighted crankshaft is supported in five plain bearings and one deep groove ball-type thrust bearing that enables both pusher and tractor use. Solid lifters were chosen to eliminate the possibility of valve lift inconsistencies due to contamination in hydraulic lifter bodies. The top end of each cylinder is pressure lubricated via an external oil line. Piston cooling oil squirt nozzles are standard.

Supposedly there are no paper gaskets in the engine; instead, Viton high temperature O-rings and silicon form-a-gasket material are used. The cylinder heads are a cross-flow configuration with the induction air system on top of the engine and the exhaust system below. The aluminum heads are removable-neither the cylinder barrels nor the pistons have to be removed for valve work. UL Power recommends a TBO of 1500 hours or eight years.

The liquid-cooled Rotax 912S torque curve is more hump-shaped by comparison, peaking at just over 94 foot-pounds (127 Nm) and maintaining that level or slightly higher at 4750 to 5150 engine rpm. The Rotax PSRU reduces this to a prop rpm range of 1950 to 2120.

The UL 260i currently installed in a Zenith 601XL weighs 166 pounds, and the Jabiru advertises installed weights of approximately 184 pounds (83.4 kg) dry. Installed weights for the Rotax 912S are reported to be 170 to 175 pounds. 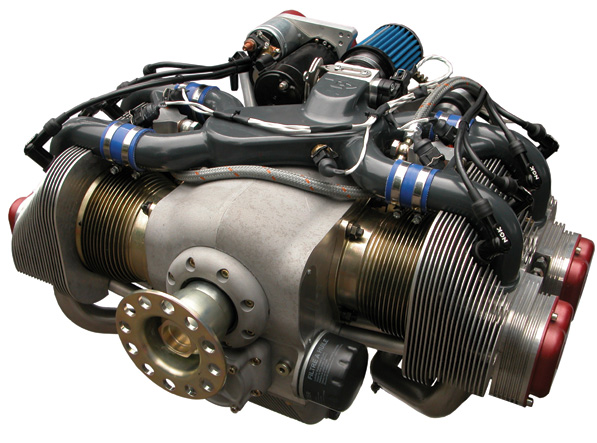 A low-profile induction system feeding the cross-flow cylinder heads is made possible by FADEC and permits a shallow installation. Note the generous cylinder and head finning plus the quality of the crankcase casting.

Some of UL Powers fuel efficiency comes from FADEC. Unlike the Jabiru and the Rotax, which use motorcycle-style Bing carburetors (with no manual mixture control), the ULs FADEC takes the engines pulse and feeds the data through a performance map in the ECU (engine control unit), which then controls the multi-point electronic fuel injection system-with automatic altitude and temperature compensation-and the high-powered long-duration spark timing. I dislike this comparison, but FADEC-controlled engines run like modern car engines. Hot, cold, low, high, turn the key and the computer controls the engine. FADEC means less pilot workload and better engine management.

The FADEC system on the UL engines is a self-contained, full digital, electrically powered engine control system. The system self-tests constantly and provides system status via annunciator lights or a signal to drive a flat panel display. There are five sensors that feed data to the ECU. Two Hall effect sensors transmit crankshaft position to the ECU and ignition coils, one sensor detects throttle position, one senses manifold pressure, and one sends oil temperature data.

The throttle position sensor and the manifold air pressure sensor provide power-needed information to the ECU, which references a 3D map. The result is optimized fuel flow and ignition spark timing for each flight condition. Any sensor failure activates a status update. If any one of the oil temp, MAP or throttle-position sensors fails, the ECU reverts to a static setting, or non-optimized mode. This results in a slight reduction in power and a slight increase in fuel consumption. The system requires electrical power to start the engine. If the airplane battery is dead, the pilot wont be able to hand-prop the engine. Electrical power is supplied by a 30-amp brushless alternator located on the engine accessory section. During normal operation, the FADEC requires approximately 15 amps. If the alternator fails, the standard electrical system configuration automatically reduces the aircraft electrical load via isolation circuitry, and the standard-size battery provides power for 45 minutes to an hour. If FADEC redundancy is desired, a second ECU, a split output alternator and a second battery are all options that can be installed singly or in combination.

What the Users Say

According to UL Power, 125 engines have been shipped, with a highest engine time of just over 700 hours; 11 are in the U.S. Steve Dentz of Carnation, Washington, ordered a 350iS for the Just Highlander hes building, his second. He sold his first one after he won Best of Show with it at Arlington in 2009.

The first one was a show plane, and it had a Rotax engine, Dentz said. The Rotax performed flawlessly, but I thought parts costs were high, and a friend had a Highlander with a Jabiru engine that I liked. Dentz has the only 350iS in the U.S. right now, and he plans to be flying this summer.

What I really liked was the fuel-injection and the new technology, Dentz said. I was going to get the Jabiru. It would have been a little bit heavier and a little cheaper.

Gus Warren of FlyWithGus, Inc. in Edgewater, Florida, is the exclusive U.S. importer of UL Power engines. He and partner Ray Griffith bought a 260i to replace the Corvair engine in Griffiths Zenith 601 (converted to a 650) and later were approached by UL Power to become distributors. Converting to the 260i increased the airplanes useful load by 97 pounds.

We became distributors right around Christmas in 2008, Warren said. We have shipped 11 engines and think that five or six will be flying this year. UL engines listed on the FlywithGus web site start with the 260i, priced at $19,765, up through the 350iS, priced at $25,915. Prices vary depending on the euro-dollar exchange rate.

Standard options include a complete oil cooler kit, a complete fuel connection kit, a lightweight fuel pump in place of the standard fuel pump, a backup fuel pump, various connectors and engine-mount-weld hardware. The engine package is covered by a 24-month limited warranty. A turbocharger system is available as a performance option.

Whats the catch, you ask? Prices are competitive and the warranty is generous. You might end up being an early adopter, but aside from that aspect, the UL Power seems promising.

Kitplanes - March 16, 2017
0
A&Ps and ExperimentalsI would like to commend Dave Prizio on his very informative article...