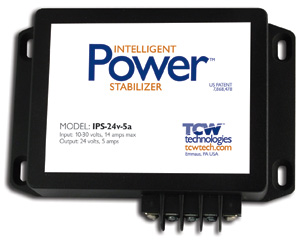 TCW Technologies is known as the company with the products that can save your airplane’s avionics in case of a crippling power surge, sag or complete loss of electricity. The company has just added two new products to its lineup: a 24-volt Intelligent Power System (IPS-24V-5A) and a revision of the signature integrated battery backup system (IBBS-12V-2AH).

The 24-volt IPS fills out TCW’s line and helps customers who are running with the higher-power radios in their panels. The IBBS, at 2 amp-hours, is a smaller system than its sibling, and is well-matched for single-instrument systems and very light aircraft (it weighs 1.5 pounds). It also serves as an independent power source for four-cylinder electronic ignition modules. 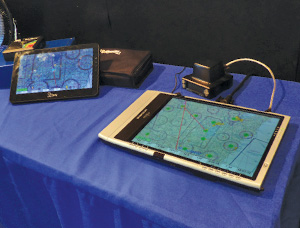 ADS-B for the Budget Minded

Options abound for pilots interested in free government-sponsored ADS-B weather. One of the least expensive market entries is the ChartFlier by Essential Flight Technologies (EFT). The ChartFlier system includes VFR and IFR charts (low and high), airport diagrams, instrument procedures, and an aviation database for airports in all 50 U.S. states, Puerto Rico and the U.S. Virgin Islands.

ChartFlier is PC-based for economy’s sake, according to EFT President Colin Bitterfield. “We wrote the code for the program so that it would be extremely small-about 1.5 mb total-to enable it to run on legacy netbooks and tablets that were sitting dormant on so many shelves.” The company offers one package, including a Fujitsu Lifebook computer and the software, for $399. Bitterfield says the program, which costs $149 per year, will run on a $199 netbook with ease.

Essential Flight Technologies offers several different bundles and packages, including options for a Bluetooth GPS that start at $39, and the ADS-B “In” box starting at $995, as well as a Zaon PCAS connection for those who are not ready to invest in an ADS-B transceiver.

The SubSonex jet aircraft prototype, JSX-1, made its maiden flight in August at Wittman Airport in Oshkosh, Wisconsin. The flight, piloted by Bob Carlton, lasted approximately 14 minutes and focused on low-end speed, including stalls and low approaches in the landing configuration, Sonex said. Carlton, whose experience pioneering light jet aircraft made him a natural choice, remarked after the flight, “It was great-flies like an airplane. The faster I went, the better it felt.” Carlton is known for his airshow performances with the Super Salto jet, and he is the developer of the Bonus Jet two-seat glider.

“It’s an exciting day for Sonex,” said SubSonex designer and Sonex Aircraft President John Monnett. “We have a test-flight plan to expand the envelope of the aircraft, and we’ll see where the project takes us from here.”

To submit a press release on a homebuilt-related product, e-mail a detailed description and high-resolution photograph to editorial@kitplanes.com. Mailing address is KITPLANES, New Products, P.O. Box 315, Ashland, OR 97520.

Confessions of a Blockhead

Bob Hadley - November 20, 2020
1
Gauge blocks are the foundation for pretty much everything. At least everything that has...