Its not easy to grow an aviation business, but one company has flourished because it filled a need, improved existing products and was ready to capitalize on opportunities. That company is Aero Accessories of Gibsonville, North Carolina, which started selling a few firewall-forward products in 1984. Today its product line-marketed under the Tempest brand-includes a wide variety of firewall-forward products.

The story begins with Tim Henderson and his company rebuilding dry air pumps. New pumps were expensive, and the mortality rate was high. Henderson thought rebuilt pumps would sell, so he developed a rebuild process and obtained FAA approval. Pilots active before the birth of glass panels remember well how seemingly fragile these vacuum pumps were and how outrageously expensive the new replacement items were. Aero Accessories also manufactured magneto repair parts in the beginning. By the mid-1990s, the company had expanded and was manufacturing and selling new dry air pumps and new diaphragm-type fuel pumps to OEM airframe manufacturers.

In late 2001, Henderson met Stan Fletcher, who was then the Vice President of Sales and Marketing for Champion Aero Products. Fletcher pitched a plan to increase Aero Accessories market share through the implementation of proven marketing techniques. Henderson was receptive and the two joined forces.

Fletcher felt that large, established companies would be receptive to overtures from Aero Accessories-now under the name of Tempest-to market their products through Tempest Products Marketing Group (TPMG), the arm of Tempest that tends to the marketing and distribution chores. Factors that drove this plan included an intimate knowledge of the admittedly shrinking market and the ever increasing costs of legal protection. Companies liked what they heard, and the Tempest brand began to grow. 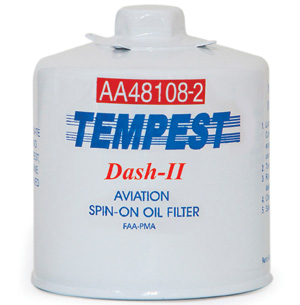 A filters a filter, right? Not exactly. Tempest says it has improved the filter in myriad ways. The Dash-II filter is shorter than the original 48108 style for easier installation.

Tempest purchased the oil filter manufacturing tooling for the Champion line of oil filters in 2004. Improvements such as magnetizing an element of the pressure bypass valve to capture ferrous metals, thicker can metals to increase burst strength and a rework to introduce the Dash-II filter, which is 5⁄16-inch shorter than existing filters, followed. Every owner and technician who has broken off the 1-inch filter removal nut during a struggle to remove a poorly installed filter will appreciate the stronger welds on the nut and self-lubricating sealing gaskets that are built into every Tempest filter.

Tempest continued to improve existing features such as the anti-drain back (ADB) feature in its oil filters. The ADB is especially important in filters that are mounted vertically. (In November 2007 the technical team at Robinson Helicopter specified Tempest oil filters over all others.) Tempest also introduced its own filter can and filter media cutters as well as a filter-can punch/drain tube combo tool to lessen spillage of horizontally mounted filters. Today Tempest has 30% of the oil filter business, says Fletcher.

Another solid performer has been the diaphragm-type fuel pump business. Most varieties of pumps are overhauled. Both the early-sometimes referred to as small and characterized by a laminated finger-and late-larger with solid finger (post 1978)-models for Lycoming applications in low (4 to 6 psi), medium (15 psi) and high (30 to 36 psi) models are in stock.

Also available are the low- and high-pressure models (with upper deck reference port) for Rayjay turbocharged installations and new and rebuilt diaphragm pumps for early model (long finger) TCM applications in both 3.5 to 4.5 and 5 to 7 psi models. 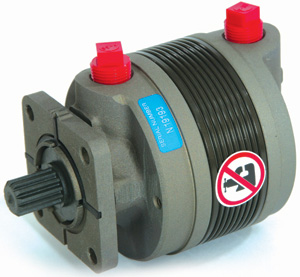 Pumped to Be Here

In May 2007, Airborne ceased marketing its dry air vacuum-pump products. A legal judgment against the company after the crash of a twin Cessna that took the life of Missouri Governor Mel Carnahan was the last straw. That decision to leave the market left a big gap, one that Tempest stepped in to fill.

Tempest studied the dry air pumps that they were rebuilding and found that 95% of failures were due to factors that arise from sloppy procedures or lack of system knowledge. So the company wrote a 25-page operations and installation manual for its dry air pumps.

Every year we have put a lot of energy into educating users at mechanic renewal seminars about dry air pump procedures such as how to inspect for wear. Where we used to see a lot of premature failures, which are failures before the vanes are worn out, now 95% of the pumps that are sent in for rebuild are due to wear, says Fletcher.

Tempest introduced its all-new Tornado 3000 dry air pump design in early 2003. The Tornado 3000 incorporated innovations such as a wear indicator port (WIP), a fully enclosed drive end to prevent maintenance-induced failures, oil drain channels to prevent engine oil from entering the pump body, a clever gadget called an LRT, which makes the oil drain channel work in different installation orientations, and improved pump gaskets. These pumps replace all 200-series pumps, come in either clockwise or counter-clockwise rotations and have a three-year, 1300-hour warranty. Tempest doesn’t publish a TBO for these pumps; they tell users to remove the pump when vane wear reaches a certain point.

The WIP consists of a small port that is plugged during normal pump operation. During maintenance, the ports are opened to permit visual inspection of the vanes. This is an important improvement over the old pumps, where you couldn’t determine the degree of wear and only knew a pump was on its last legs when it finally failed.

But thats not all. We are working on improving the dry air pump again, Fletcher says. We think we can make a pump that will make it to engine TBO on most Lycoming and most small TCM engines. The dry air pump gear drive speeds for Lycoming and small TCM engines is 1:1 to crankshaft speed; large TCM engines drive speeds are 1.5:1. The increased rotational speed increases wear and makes increasing lifespan a greater challenge.

When asked about dry air pump cooling shrouds, which consist of a cuff and blast tube, Fletcher says, Our tests show that they help with the 400 series pumps but don’t make much difference on the smaller pumps. Good to know. 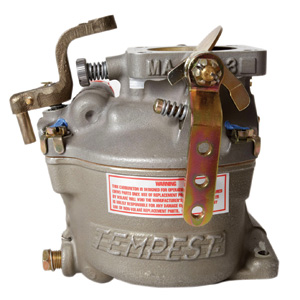 Our primary goal in any product we have is to make product improvements, says Fletcher. We have improved the carburetor manufacturing and testing equipment. We can turn out 12 carburetors today that all run the same. We service the certified world, but we also sell carburetors to kit builders at a much more attractive price.

In addition to carburetors and dry vacuum pumps, Tempest also rebuilds and services a wide range of pneumatic system parts including vacuum regulators, twin-engine shuttle valves and de-ice valves. One other well-received benefit of Tempest taking over the dry air pump business is its line of affordable high-flow pneumatic pump fittings. These fittings were outrageously priced before Tempest entered the market.

What the Future Holds

We are going to stay in the engine area, and were looking at electronic ignition systems, Fletcher says when asked to elaborate on the company’s future projects. We may support an existing manufacturer. We think electronic ignition will be approved in the near future.

During the last 10 years Tempest has expanded rapidly while the piston-airplane industry has shrunk. The key to this kind of success has been a keen understanding of the market and a commitment to refine its products. Last year Aero Accessories lowered the prices of its carburetor line-you cant beat that kind of improvement.

LeRoy Cook - March 24, 2020
0
Thinking about restraints while building is easier than fixing substandard ideas later on.