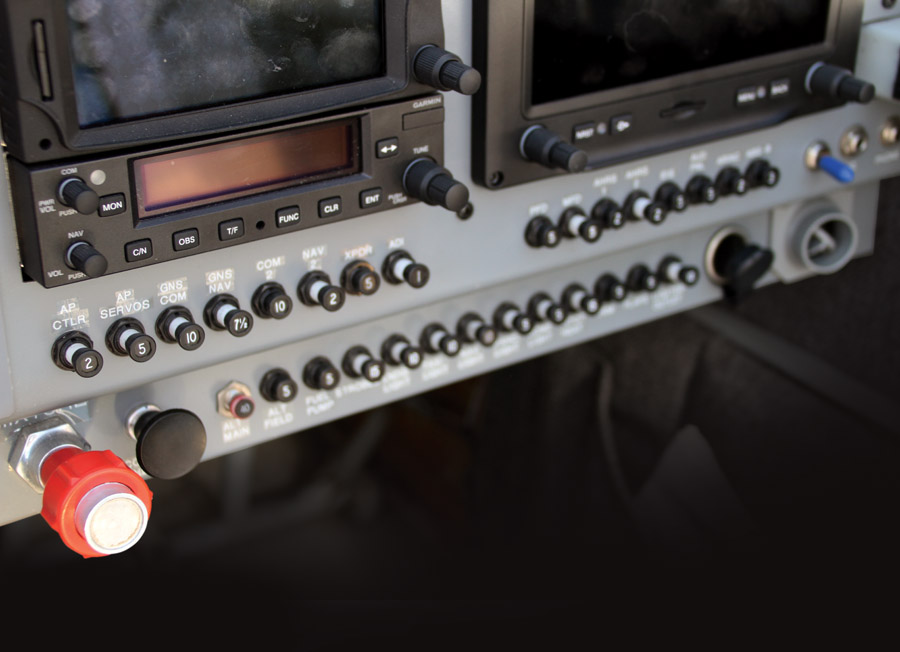 Don’t ask how it happened—it’s a mystery. This airplane has a panel that I helped upgrade about a decade ago, back when alternator switches were still in fashion. I always used to like them, but since we’ve reached the point where almost everyone is using a derivative of an automobile alternator, and the ones with internal regulators (you did add overvoltage protection…right?) were designed to be on from before engine start, I no longer see the need. I can always disconnect with the field breaker as well as I can with a switch. But having the switch has a downside—it is easier to turn it off, or leave it off, accidentally.

I had made an hour-and-18-minute flight to visit a friend. Visit (and a fine lunch) concluded, I was climbing back out toward home, leveling off at 10.5 when I looked down and realized that the autopilot had disconnected. Odd…it’s never done that like this before. I checked the breaker, and it was in. But doing a panel scan, I noticed the alternator switch (right next to the master) was off. I switched it back on and checked the voltage. It rose from 11.5 (battery voltage under load) to 14.0, a nice healthy charge. Bringing up the detailed electrical page on the EFIS, I saw the amperage at something over 55…and then it slowly dropped back down to zero.

Another quick check of the panel, and I noticed that the main alternator output breaker (40 amps) was popped. I pondered for a bit, smelled no smoke, and gave it a reset. Low and behold, the amps (measuring flow out of the alternator) climbed back to a little over 50, then the breaker popped again. Knowing that these breakers are affected by heat, I let it cool down and began shedding load—not that there was really that much.

Oh yeah, this is a heavily instrumented airplane, but everything is modern. Dual-screen EFIS, dual AHRS, IFR navigator, backup nav/com, all LED lighting—none of which (except for the com radios when transmitting) draw that much power. But I pulled breakers nevertheless, down to the point where all I had left was a single com (disconnected the nav side power) and one EFIS display being driven by a single AHRS. This took a little time, and the big breaker had cooled again, so I pushed it in once more. This time, I saw 50 amps…and a drop to 49…and then a breaker pop. Well obviously, the 40-amp breaker isn’t going to hold that kind of load—but where was the load coming from?

Suddenly the light bulb went off over my head (I should have pushed that breaker in earlier!). This airplane was built close to 30 years ago, back when 35-amp alternators were fashionable. At some point before I got involved, probably when equipment was added to make it IFR capable, but before the days of EFIS, the alternator had been upgraded to 60 amps—sort of an industry standard. However, the breaker had been left at 40 amps. I am sure that someone did the calculations for the constant plus intermittent loads and determined that it would be fine.

As we upgraded things along the way, the load calculations actually decreased since we took out incandescent lights and installed LEDs, and radios and EFISes became much more efficient. Everything stayed well under the 40-amp limit imposed by the breaker, so we were fine…right? Well, not at all. There’s a catch. Let’s call it Catch-22 because it was not easy to get around.

I can only assume that the alternator switch had been off for longer than I thought, and the battery had been drained a bit more as a result. When the alternator came back online, with all of its 60 amps, it dutifully tried to service the battery—exceeding the capacity of the undersized breaker. Even as I switched off all the rest of the electrical loads, the alternator kept trying to do its best to get the battery back to full charge, and that overtaxed the little breaker that couldn’t.

So this is an interesting error chain that began long before I absentmindedly bumped the alternator off or forgot to check that it was on. It goes back to a design error, one that I could write off as someone else’s fault for upgrading the alternator without upgrading the breaker—but one I have to accept as my own for not catching it in the years since, as we have upgraded the panel.

Nothing on the alternator screams, “I am a 60-amp machine!” but I knew it because I have worked on it. It just never occurred to me that there was a mismatch in the design. It was easily fixed, of course, and a new breaker has already been installed.

So what else do we take away from this? Obviously, I need to make sure that the alternator switch is turned on and stays that way. Or possibly I remove the switch from this airplane or put a guard on it (it is susceptible to a “knee bump”). That’s pilot stuff. From a design standpoint, its important to check the entire electrical system when doing an upgrade. Make no assumptions—especially don’t assume that someone before you did the job correctly. In fact, from a designer’s standpoint, that’s a key—always go back to the root of the design and see if someone prior to you made a mistake. Assume that they did because we are all susceptible to mistakes and errors of omission.

And that’s some catch, that Catch-22. You can charge the system, but only at a rate that you can’t control—and that exceeds the capability of the system. I’m glad the day was clear VFR and that I had a good battery.

Barnaby Wainfan - February 10, 2020
3
Last month we started our discussion of wing design with a look at the...