Whoever coined the old adage about the futility of fitting a square peg into a round hole probably knew nothing about the tenacity of homebuilders (or the functions of lathes). The attractions of fitting automotive engines into aircraft are many, but success invariably requires knocking off a few pesky corners first.

In Jess Meyers case, it was back in 1970 when he had the urge to build a 3⁄4-scale ME-109 from a European kit. The only engine that would fit was from a Buick, and there were problems operating it in direct-drive mode. There was a propeller speed reduction unit (PSRU) available, but the more Meyers looked into it, the more dissatisfied he became. We couldve written a book about why it wasn’t gonna work, recalls Meyers, who began looking into building his own.

All these years later, Meyers is still the head of Belted Air Power. He has leveraged the development of his own PSRU with firewall-forward packages featuring the well-known Chevy V-6 engine.

In the 1970s, the concept of putting automobile engines in airplanes was still mostly fresh and uncharted territory, but there was help to be had. A friend of mine, Tom Jones, would come over and say, Why does this have to work like this? and generally play devils advocate, Meyers said. But he was an expert engine builder for motorcycles, and we eventually got the [aluminum V-8] Buick engine settled down.

Meyers Swift provided the test bed for the Buick engine. We finally got this thing running, and then everybody told us it wouldn’t work unless we had real light wing loading and went real slow, Meyers said. But the only airplane I had at that time was the Swift. And the result was just the opposite of what we were hearing. It was pretty successful.

Meyers continued with the Buick V-8 and then eventually switched the airframe over to the 4.3-liter Chevy Vortec V-6 engine. He took a methodical approach and was smart enough to accept outside help. Some came from an old-time Lockheed engineer known as Dr. Harold, who explained that, You cant push a wagon with a rope, you can only pull it. In other words, no matter how much air pressure you had at the cowling inlet, you needed lower pressure on the other side to pull the cooling air through the radiator for sufficient cooling. Dr. Harold would make us read these magazine articles from the 1920s that hed collected, and then hed quiz us, Meyers said. I guess we passed the test.

The other factor was a large wind tunnel constructed between adjacent hangar walls, powered by a 5-horsepower electric motor. This development had a profound effect on the cowling design in the ongoing quest for better cooling. We could build these models, and then see how just a slight bit of change would make a difference, Meyers said. Its how we can use a radiator thats only 6 by 20 inches, more than ample for the 4.3.

With the cooling issues addressed, the development of a firewall-forward package targeted at the Vans RV market continued, and Meyers Swift was eventually replaced by an RV-6. We bought a new GM engine in a crate, but the performance in our RV just wasn’t what the others were getting, Meyers said. It turned out that even though there were six different 4.3-liter models in various GM vehicles, GM stocked only one universal replacement. So if you didn’t specify that you wanted a motor for a Chevy S10 with a tow package, you wouldn’t get what you wanted. 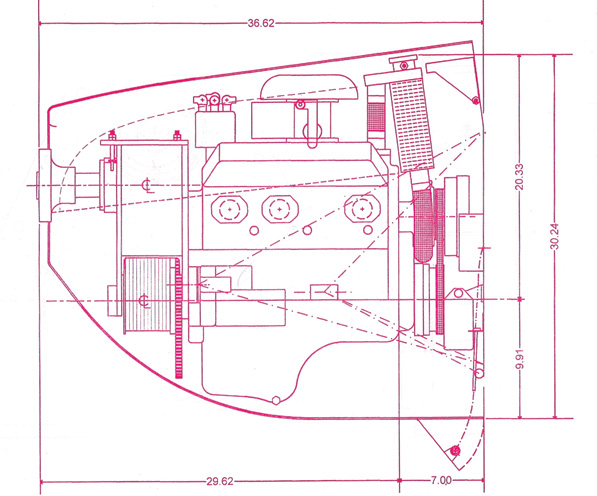 An outline drawing of the Vortec V-6 installation shows how itll fit with ease on the Vans RV-6 firewall.

Like most successful automotive conversions, some other basic changes to a stock V-6 are required for its new role as a reliable aircraft engine. For example, the stock injectors and ECU are replaced by a Holley 4412 carburetor and a modified Mallory dual-point distributor, a McNeilly metering block allows the use of a manual mixture control, valve seats are installed in the heads to handle leaded avgas, the stock valves are swapped for stainless steel, and a new camshaft is installed along with quite a few other engine parts and accessories. In all, roughly 30 new items are added to the stock engine to prepare it for flight duty. Most are off-the-shelf, high-performance automotive parts, and BAP publishes a source list for the engine items, as only a few proprietary ones need to be ordered from BAP. One thing that Meyers leaves alone is the stock compression ratio of 9.1:1.

Finding a suitable used engine core to build up isn’t all that difficult, Meyers said. They’re no longer manufactured new, so your best bet is to find one in a wrecking yard: 1986 through 94, without the counterbalance shaft, hopefully from a car thats been rear ended. Most will have well over 100,000 miles on them, but you’ll still see hone marks in the cylinders. They’re extremely rugged engines. The BAP parts list also includes Scoggin-Dickey Racing as a source for a freshly rebuilt V-6 (part number 12361243); current price is $2150, a good alternative for those with no desire to scour the local wrecking yards.

The belt-drive PSRU unit itself lists for $5600. Straightforward in concept, the BAP drive unit is a robust but nicely finished piece that uses a simple belt and cogged gears arrangement to provide a 1.43:1 reduction to its SAE 2 propeller flange (the same one found on a typical Lycoming). The bearings are sealed units, and the only recommended maintenance is the replacement of the one belt every 200 hours or two years, whichever comes first. Meyers says that its also a good idea to replace the small lower nose bearing at that same time. The cost of the belt is right around $200, and its a commonly available item, Meyers said. If the airplane is kept outside, replacing it every 200 hours or so is good.

Other than the economy of $1 per hour of operation, the belt drive offers smooth, quiet operation and a natural immunity to the power pulses of the engine-but this only goes so far. If the unit is subject to backfiring, it can shear or overstress the crank mounting bolts, Meyers said. Its a good idea to make sure you’ve got your timing right first. 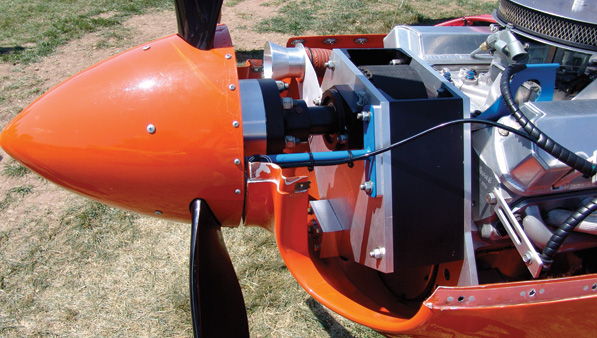 The heart and soul of the Belted Air Power PSRU is a wide rubber belt running between two toothed drums, both thoroughly supported by aluminum plates.

Running between 3000 and 4000 rpm, the BAP conversion reliably burns 7.5 gph of 100LL avgas, Meyers said, which compares favorably to a traditional O-320 aircraft engine that will burn significantly more in a full-throttle climb. We take off, climb to 7000 or 8000 feet, fly for 2 hours, and land. And we consistently burn 15 gallons. He has pretty much settled on the ground-adjustable Warp Drive propeller for his installations because of its option to adjust the propeller for specific flight conditions.

Meyers is understandably proud of the reliability of his drives, more than 200 of which are in service. In 16 years of flying, there have been only three fatal accidents in BAP-equipped airplanes. One was a heart attack, and another was water in the fuel that froze all the way from the tank to the carburetor, he said. The last one was two rocket scientists doing vertical climbs with minimal fuel. None of these had anything to do with our drives.

The One and Only

As much as the BAP firewall-forward package was developed with the RV-6, -7 and -9 airframes in mind, an enterprising builder in Michigan decided it would be just the thing to power his GlaStar.

Gerald (Jerry) Nichols spent three and a half years building his airplane, and chose the 4.3-liter Chevy V-6 with the cam train driven internal balance shaft. I know it adds a bit of weight, Nichols said, but I think it runs even smoother. He built up his engine with most of the parts from BAP, but he also used the expertise found in a local radiator shop in the Detroit area to provide the cooling solution. He confirmed Meyers performance and fuel consumption claims for the engine.

Nichols is satisfied with his choice of powerplants for the GlaStar, even with the added weight of a liquid-cooled engine with a balance shaft. All that was needed was 7 pounds of ballast at the last fuselage station, he said, and now I have a great airplane.

Meyers has recently been working with tuned header exhaust systems for the RV packages, which raise the horsepower at the expense of a few more pounds. And hed like to get the V-6-powered Swift back into the air. We only flew the Swift for a short time before focusing on the RV, Meyers said. It really climbs well and has good range for the fuel. Or maybe I should take my wifes advice and just go flying more often.