I read once that when Hollywood needs big, dramatic cumulus clouds as a background for a flying scene, they send a unit to the Gulf Coast. Having lived in, and flown out of, Houston for three decades, I can easily believe that is true. On any given summer day, the sky is likely to be filled by late morning with energetic white columns of vapor, boiling their way aloft. Early in the season, these can linger all day in the form of thunderstorms and showers. By August, the heat is so entrenched that these clouds rain themselves out by noon, leaving the air too leaden to produce more precipitation. These patterns become easy to read after years of watching and flying in the area, allowing the observant pilot to fly at some point on almost any day of the year. On the days when the clouds are rising after a significant event such as a storm or frontal passage, the contrast between the clear blue and stunning white can be spectacular. 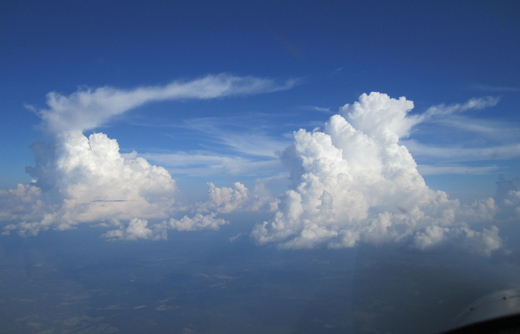 Years of watching the weather and flying in a given area make the cloud patterns easy to read, which doesn’t mean they aren’t still spectacular.

I could tell that the atmosphere was getting back to its normal level of humidity and heat after a blessedly cool and dry few days (following a recent hurricane, this was a huge relief). The moisture was visible in the mid-morning sky as the first of the day’s cumulus began forming up over the coastal plain. Launching with no plan other than getting airborne for a little while, I climbed quickly after clearing the Class B and popped through the scattered clouds, topping out at 4000 feet in cool, clear air—white popcorn below, blue sky above. The bubble canopy of the Van’s RV-3 always makes me feel like I am merged with the blue, the world below inconsequential as long as I remain aloft. I have never before had an airplane that felt such a part of me: It goes where I think long before my muscles consciously react.

The contrast between the hazy sky below and the stark blue above is startling, yet familiar. It is one of the joys of personal flight to change your environment at whim. The masses of ground-bound humans have no visceral understanding of what it feels like to leave their environs and in a few short minutes be in a different world. Someone stuck on the surface of the earth would have to drive for a full day on the interstate to significantly change the world around them. Yet if they could add the vertical component, they would find that only a mile above them, the air is clear, dry and crisp. 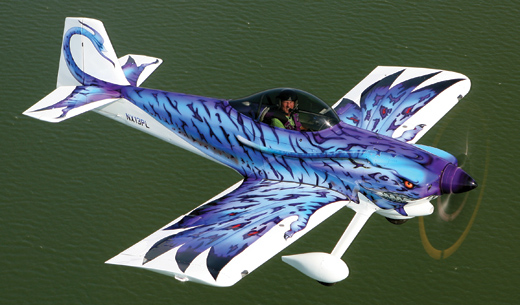 The author feels at home dancing with the boiling clouds in his newly completed Van’s RV-3 (maintaining a safe distance, of course).

While most of the puffy clouds seemed content that morning to remain level with their neighbors, I spotted an overachiever that was poking out of the layer a few miles down the coast—a “clown’s head” that looked like it wanted to become something greater than its fellows. With nothing better to do, I rolled toward it in mock attack, aiming for a tangent a safe distance away and building speed as I leaned out the mixture and set power. Coming up even with the little tower, I rolled wings vertical and pulled to circle around its base, my head to the cloud as I came around 180°, pointed back the way I came. The top looked to be about 2000 feet above me. The cloud was seething with power. It was headed higher—and fast. 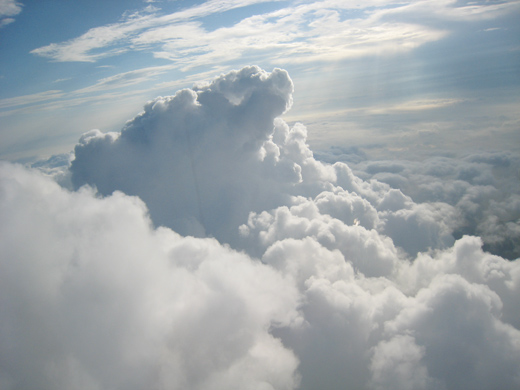 I pushed all the levers forward and eased back on the stick into a maximum climb, continuing to circle the lone pillar. I could see that we were alone, just me and the vapor, but I maintained a legal distance as I stayed with it, gaining slowly on the top. Tsamsiyu and I were climbing at 1500 fpm and barely catching up with the top. Around and around I went, holding a nice G level and getting all I could out of my airplane. The cloud continued to boil along the sides, and as I swung from the sun side to the shadow, I could see wisps of vapor silhouetted for an instant before they dissipated. Through 9000 feet, I could tell that we were going to top this thing in another turn or two, and it almost seemed to lose steam as I came around at 10,000 feet. I pulled level with the top, which was fully illuminated by the sun, still reaching and boiling but slowing down noticeably. It had run out of unstable air and was clearly doomed. As I rolled over the top and looked down on my “competitor,” I felt both joy and sadness—joy for the “victory” and sadness for the end of the competition. Crisscrossing over the top at 11,000 feet, I rolled a few more times and looked at the flight timer on the EFIS. It had been just 12 minutes since brake release. 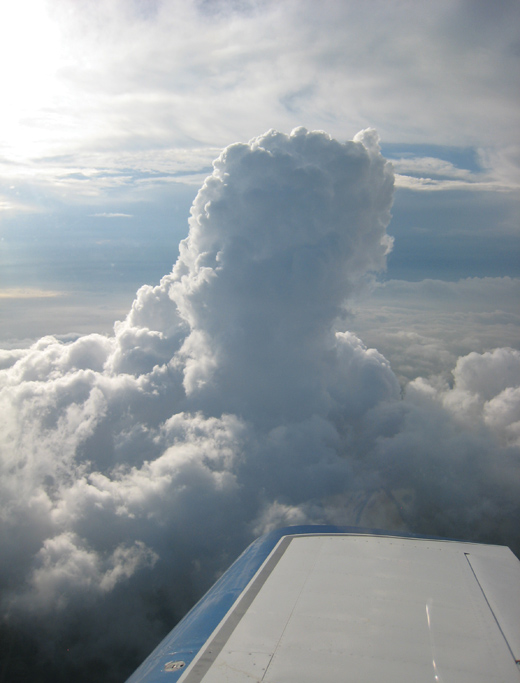 I pulled up into a wingover then pulled the power and rolled into a dive to spiral back down, the tower considerably thinner than it had been during the trip up. It was dissipating, having spent its energy in the climb, then running into an invisible ceiling that kept the day safe from thunderstorms. It never knew I was there, but I counted it a worthy adversary nevertheless. I looked back as I slipped down through the tops of its genteel brethren—the sheep of the sky, content to graze on the low-level moisture—and the tower was almost gone. It was but a transient encounter, perhaps a dream, but nevertheless, a fine way to spend a few minutes in my perfect flying machine. 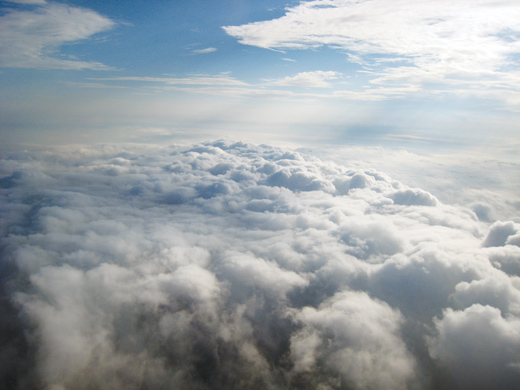