Home Magazine Builder Spotlight Where Have All the Homebuilts Gone?

Most of you probably remember the heady days of the early 2000s, when every year saw the FAA’s listing of the total number of homebuilt aircraft rise by a thousand airplanes or more. Every year, excited articles were triggered when the Experimental/Amateur-Built (E/A-B) fleet size expanded. “We’ve hit 30,000 E/A-B! 32,000! 33,000!”

Haven’t seen such claims lately, have you?

And when today’s numbers are published, they’re hard to believe. If you’ve noticed any announcements at all, you’re probably saying things like, “27,000 E/A-B Aircraft? Where did they all go?”

So, where did they all go?

Well, most of the missing homebuilts didn’t exist at all—or, at least, hadn’t existed for a few decades.

Let’s take a look at what happened.

The FAA maintains a database of registered aircraft. It’s actually several cross-referenced tables that, when combined, can provide a detailed description of a given N-numbered aircraft. Dozens of parameters are available, including make/model, serial number, year of manufacture, owner’s name and address, installed engine, etc. When an application for an N-number is received, the plane is added to the registry. Special flags note whether this is just a reservation or is for an actual aircraft.

Now…the question is, when is an aircraft removed from the FAA registry?

That’s where it gets fun. Prior to 2010, aircraft were only removed at the registered owner’s request. Typically, the “owner” in many cases was an insurance company, canceling the registration after the aircraft was totaled. There were, no doubt, some conscientious owners who canceled the registration when they scrapped an old airplane.

But nothing forced them to. Other than getting periodic mail from the FAA, there wasn’t any drawback being listed as the owner of a plane on the FAA registry. And because the owners didn’t respond to any FAA queries, the FAA could never be sure whether the plane was still in existence or not. So they were kept on the record.

After 9/11, the process for training pilots and registering aircraft came under a lot of scrutiny. The FAA was criticized for losing track of aircraft—for being unable to determine the actual owners of thousands of aircraft.

The requirement for triennial aircraft reregistration was born. Starting in January 2010, registered aircraft owners were required to renew their aircraft registration every three years. Reregistrations would have to be accompanied by a $5 fee; the owners couldn’t just check off a box on a postcard and send it back. The actual program was phased in over three years, so that everyone’s registration didn’t expire at the same time.

Since 2010, more than 80,000 aircraft have had their registrations canceled. That’s a 21% reduction in the overall U.S. aircraft fleet.

This caused some angst in the industry. People were used to the fleet increasing by 1000 or so homebuilts every year. Yet the numbers dropped and kept dropping. By the end of 2018, there were less than 27,000 E/A-B aircraft.

In reality, the number of active homebuilt aircraft wasn’t affected. There were just as many aircraft flying; in fact, there were still, on average, a thousand new homebuilts completed each year. As Figure 2 illustrates, the problem wasn’t that homebuilt airplanes weren’t being built; it was because of aircraft being removed from the registry via the reregistration process.

Hardest hit were older homebuilts, the ones from the ’60s and ’70s. Ninety percent of Bensen Gyrocopters were removed, as were about two-thirds of the Quickies. Half the Fly Babys disappeared, as did about half of the Sonerais, BD-4s and BD-5s. Oddly enough, the oldest homebuilt of all—the Pietenpol—wasn’t badly affected. It lost less than 15% of the fleet. (You can find a table showing the effect of reregistrations for multiple homebuilt types here.)

Again, there was nothing actually wrong. It was just a byproduct of the dead wood being removed from the registry. But it certainly looked bad.

The issue was addressed at the annual EAA/FAA Recreational Aviation Safety Summit in February 2015. The FAA and EAA now emphasize tracking homebuilt safety by the number of accidents, rather than as a percentage of the fleet.

Buried in the chaff from the reregistration effort was the fact that homebuilt completions were actually slowing. About 1100 new homebuilts were added to the roster in 2010, but by 2018, this had dropped to just 780.

What happened? We can’t know for sure, but the primary culprit was probably the 2008 recession. It most likely triggered a steep drop in aircraft kit sales. Aircraft completions follow the sale of the kits by a number of years. Discretionary purchases like homebuilt aircraft kits probably took a while to resume, thus the kits purchased in 2011–2017 are just coming to completion.

Happily, we’re seeing signs of recovery. Last year, 1179 new E/A-B registrations were added to the roster, the most in a single year since 2001. Three hundred thirty-five were previously deregistered aircraft that had been restored to the registry. But to the FAA, they count as new aircraft—so we’ll count them, too.

If we ignore the “restored” homebuilts, 844 actual new homebuilts were completed. What types were they?

As one would expect, Van’s Aircraft led the way: 199 of the new aircraft were RVs. The RV-7 took the lead, with 51 examples. Second place was a surprise—in more ways than one.

CubCrafters was number 2, with 61 new Carbon Cub airplanes of all models. What’s more, the larger airplanes in the stable, the 2000-pound gross weight versions of the Carbon Cub, saw 51 new aircraft added to the registry in 2019.

That’s the same as the RV-7. Van’s and CubCrafters tied for the most-produced homebuilt airplane in 2019*.

Of course, Van’s wide offerings dilute the sales of specific models. If the company hadn’t offered the RV-8 and the RV-14, more customers probably would have opted for an RV-7, and the comparison wouldn’t have been close. Still, it’s interesting when you consider that the Carbon Cub kit costs about twice that of a quickbuild RV-7.

Includes only companies with 10 or more completions

What does the future hold? You’re asking the wrong guy. Last year, I predicted that a lot more homebuilts would be deregistered in 2019 than actually were.

But things are certainly looking up. The net increase in homebuilts (new planes minus deregistered ones) was the second best in the last 10 years. The cyclical nature of the FAA’s reregistration process should result in fewer removed from the roster in 2020, and there are probably plenty of kits bought during the recovery from the 2008 recession that will be finishing up.

To steal a line from Jim Weir—“Stay tuned!”

*The Carbon Cub EX-3 and FX-3 were counted together because the major difference between them is whether builder assist was used. Both models are licensed as Experimental/Amateur-Built. Similarly, the RV-7 and RV-7A (taildragger and nosewheel versions) were combined for the comparison. 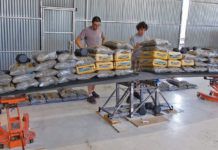 Scott Spangler - December 12, 2012
0
Easy to build, easy to fly...and affordable too. No wonder the Fly Baby remains popular decades after the prototype debuted.