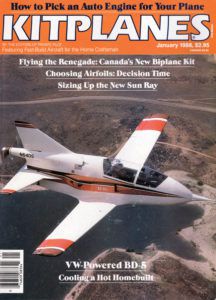 Jim Bede’s BD-5 had, by the late 1980s, still managed to hang onto its Bond-esque glory despite never really finding a good piston powerplant to fit into the airplane’s thin midsection. The Hirth two-stroke was among the most common engines in the BD-5’s pre-jet gestation, but it could be temperamental. A popular engine at the time was a conversion of a Honda all-aluminum inline-four. For our January 1988 issue, Don Downie reported on one engine that performed well and had no cooling issues. Bob Sauser’s BD-5Vee, as he called it, used a developed version of the VW flat-four. Sauser spent many hours developing a cooling system fed by side-mounted NACA ducts and augmented by electric fans for ground cooling. Experimentation with a purpose!

Inside the issue, editor Dave Martin reported on Rand Robinson’s single-seat KR100, a Continental O-200-powered single-seater with 200-mph cruise on just 66 square feet of wing. The kits were due to be available later in 1988 but the airplane was never actually offered. On that same spread was an ad for the ill-fated Prescott Pusher; the stubby four-seater promised 200 mph cruise and “turbocharged and liquid-cooled engines.” The kit debuted to much fanfare but the company folded before it could produce many kits. Some 16 Prescott Pushers are currently on the FAA register but it’s unclear how many are actually flying.

Ken Armstrong reported on Murphy’s Renegade Spirit biplane, powered by a Rotax 532. “Addition of the 532 engine and the large-diameter propeller had increased the speed considerably,” he said. “We awed the designer when we told him we were getting a consistent indicated airspeed of 95 mph (true airspeed 100 mph)! Now that’s fast for a biplane with only 64 hp.” At the back, we had 13 pages of classified ads. Life before the internet.

Ishmael Fuentes - August 17, 2009
0
Having problems drilling a precise hole in a tube? Ishmael Fuentes has the perfect-and inexpensive-solution with this nifty, easy-to-make V-block drill jig.