Small distractions can, unfortunately, lead to very bad days in the cockpit. This is why I sometimes get nervous about low-time pilots doing first flights in homebuilt airplanes. You never know exactly what the distraction will be, or how you will react to it, unless you have experienced odd distractions before. Familiarity with the airplane and its systems is critical to a successful outcome.

Take, for instance, an interesting scenario that developed for me recently. And to get this out of the way at the start: I will tell you now that all turned out just fine and dandy, nothing was damaged, and the resulting landing was a two-chirp-left, then right.

I got home from work with a thumb drive containing some new EFIS software that I was excited about beta testing. I do this frequently and have a proven, simple process of updating one EFIS screen at a time in my two-screen Grand Rapids setup. This allows me to fly the new software for several days before upgrading the whole system. In this case, the upload went normally, and the calm air and blue sky beckoned.

Oh, let me back up a couple of days. I have been fooling around with antennas and had done a final install of a new glideslope antenna attached to my RV-8s roll bar. That involved a partial panel pull-essentially putting the panel in my lap while I drilled a small hole in the glare shield for the cable. The only thing I disconnected was the glideslope antenna

-all the rest of the wiring remained attached. The replacement went fine, and in fact, I test-flew the antenna the day before. It picked up the GS more than 20 miles out from the nearby field with an ILS. I couldn’t figure out why I didn’t get the localizer when the same radio received local VORs just fine. But the answer was obvious when I checked NOTAMS. The ILS was noted as out of service. (Your first lesson today: When testing new or updated equipment, be sure what you’re testing against is actually working before you assume you made a mistake.)

Anyway, with the new software loaded, I saw no reason to power the system down while I rolled the airplane out and strapped in. I hit the starter and realized that working out of sequence on the checklist, I had forgotten the Aux battery power switch, so the displays rebooted due to the main bus under voltage. Hmmm…hadn’t done that in a while! But the system recovered nicely, and I taxied out to the end of the runway, running through the control checks. Everything looked good, so I rolled for takeoff on this beautiful evening.

As I climbed through 200 feet, I looked down to see that my percent-horsepower display was reading -12. Thats not right. Oh well, the climb is normal, time to pull the rpm back-at least the tach is reading right-but why is the manifold pressure readout static? My first thought, honestly? Software. That dang new beta-test software must be the problem.

Fine. Keep flying the airplane, turn out of the pattern and head for the box, my local practice area. On the way, I begin to wonder what else got messed up in this beta. I scanned the rest of the panel and realized that I was indicating 150 knots…in a climb! OK. Now Im certain that something is amiss; the RV-8 hasn’t suddenly gained that much performance.

Again, keep flying, climb looks nice, level at 1500 to stay under the Class B and accelerate. Wow, I wish that were true! I was passing 180 knots in level flight with the throttle pulled back to about the midpoint. The altitude matched the GPS as closely as it normally does, so I headed out to the practice area a minute or two away to sort things out. This was an instinctive decision: While the rest of the airplane appears to be performing normally, slow down and try to determine the root cause of the apparent indication problems, and if thats not possible, at least understand the extent of the anomalies.

Trimming for level flight and adjusting the engine by ear, I quickly checked the setup pages on the EFIS to make sure the engine calibration data wasn’t corrupted. It had never had a problem making it through an upgrade before, but there’s always a first time! No…thats not it; the table was intact. Of course, that didn’t make any sense anyway-the manifold pressure indication was static-and that clearly was the source of the percent power problem. I checked the instrumentation circuit breaker, and sure enough it was out. Id checked it in the pre-power-up checklist, so this happened sometime after startup.

Ahhh…there was that under volt at startup! Under volt means over current. Makes sense. (OK, I’ll allow myself one reset in flight-resetting a circuit breaker more than once in flight is, at least in my book, a no-no. The CB is there for your and your wirings protection.) Push-click, and manifold pressure was back, as was the horsepower computation. Problem solved. But what about the airspeed? Ive seen the high airspeed before, and that was with a static leak. Well, I did have the panel in my lap, and that would explain the error if I had accidentally tugged on a static line. Seemed logical enough, and it was obviously a problem that I couldn’t fix in flight. 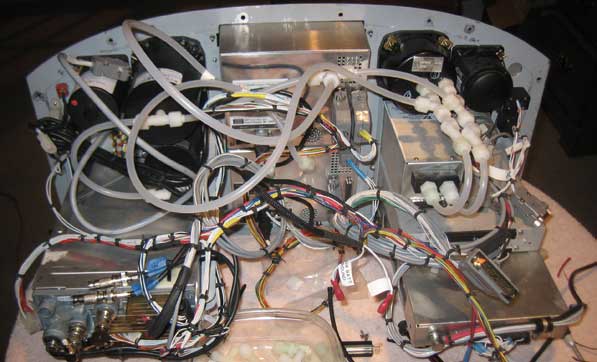 If your panel is this far apart for modifications or routine maintenance, be aware that something could well be amiss on the next flight and be ready for it.

Here is where the experience comes in. Ive flown this particular airplane for about 1000 hours, and really don’t need an airspeed indicator to land it. Knowing that I probably had a static leak, I biased my altitudes low to make sure that I didn’t inadvertently violate the Class B airspace as I ducked under to go home. The landing was routine.

On the ground my suspicions were validated. Pulling a display unit showed me the static line that had been yanked off when the panel was reinstalled. The fix took a couple of minutes, and the airplane was restored to full functionality. There was never really any danger, if you define danger as uncertainty about a safe outcome of the situation.

The real lesson here, though, is not about engine gauges, circuit breakers, procedural deviations or the fragility of static lines. It’s about how pilots react to unusual circumstances and whether they fly through problems or become fixated on issues that are not really a factor. Probably the best known case of problem fixation was the airliner that flew into the Everglades a couple decades ago because everyone on the flight deck was troubleshooting a burned out landing gear light bulb-and no one was paying attention to the altitude.

It takes a certain level of experience to know right away whether a funny sign or symptom is something that should cause worry, or if it can be dealt with later. It takes a certain innate ability to remain calm regardless of what is happening around you. But it takes an honest assessment by pilots to understand if they are ready to deal with cockpit distractions at the worst possible time (generally during takeoff or landing).

High-time pilots do crash and burn; there is no doubt about that. And low-time pilots frequently exhibit good judgment and emergency handling if they have been trained in a disciplined way. What is most important to remember is that it takes a conscious effort to learn to fly the airplane above all else. Only then can pilots consider themselves ready to take on the potential unknowns of test-flying a new airplane.