The mission: fly from Houston to Carlsbad, New Mexico, for the weekend to do some cave exploring and mountain hiking with local speleological experts and RV pilots.

The challenge: March weather across Texas, providing interesting combinations of low fog and towering thunderstorms. Combined with a somewhat constrained schedule, the goal was to operate safely and still accomplish the trip.

The vehicle: Well, the Valkyrie, of course! Some 1100 pounds of Van’s finest design, the RV-8, equipped with an EFIS panel, triple GPS navigation, XM weather and a good autopilot. 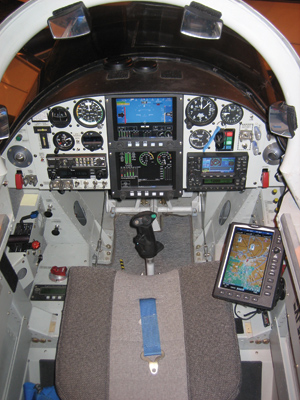 Having a capable aircraft means that you can use it all, as long as you use it wisely.

After watching the weather for several days, it was clear that while there might be some storms around, the trip was doable using all of the available information and tools. It may seem counterintuitive to some, but generally speaking, the worse the weather, the less likely I am to file IFR. I like IFR for getting into and out of airports with below-VFR weather caused by flat ceilings, mist and drizzle. As long as you follow procedures, maintain fuel margins and stay proficient, those are unlikely to kill you.

During violent weather or icing, I don’t like to be buried in clouds. In those conditions, I prefer to stay VFR on top, when possible, or underneath (which eats fuel, so it is the second choice), if the visibilities are good and safe minimum altitudes can be observed. If the weather is too bad to do that, then I sit and wait it out.

The conditions I had seen for several days were low clouds in the morning, with scattered thunderstorms, some along lines, forming in the afternoons. So my strategy for the trip out was to fly first thing in the morning, avoiding the violence of the afternoon, and accepting the ceilings and low visibility. This worked out perfectly-departing just at sunrise, with moisture-laden air but respectable visibility and good enough minimums to land at my departure point (or nearby Hobby or Ellington if an early mission abort was needed).

As I climbed out to my filed altitude of 10,000 feet, I enjoyed the rare humor of the departure controller joking with airline crews at the beginning of his shift. I imagine he gets less humorous as the day goes on. I was filed via airways that form an almost direct line between Hobby and KCNM, and I like that for the purposes of having intermediate waypoints in my Grand Rapids Technologies EFIS. The flight-plan page will tell you the instantaneous predicted ETA and remaining fuel for every waypoint in the plan, and this gives me a good idea of whether I might have to consider an early landing or diversion. If you just go "direct destination," you don’t have any intermediate points, and you lose a little situational awareness that may add flexibility.

The XM weather on my Garmin GPSMAP 396 was showing a thin line of showers over the hill country across my route-light remnants of thunderstorms the night before. The forecast called out the potential for building more storms, but at 0800 I was between layers at 10,000 feet, in smooth air, and suffering only slightly from a wind that varied from 10 knots on the nose to 10 knots from the left. The weathermeister.com web site had predicted this would be the case, so there was no surprise. Only slightly annoying was the fact that the METAR for KCNM dropped to a red flag on the 396 early in the flight-low visibility and clouds right at ILS minimums looked like morning fog. Again, this was no surprise, and as I progressed the predicted improvement came. The ability to see this happen while in flight is simply magic! The only weather I encountered was a few light drops of rain as I crossed the old showers, still in between layers, with good visibility, accompanied by a few bumps of moderate turbulence. I left that behind over Junction, Texas, and came out into full sun with an undercast as I headed out over the plains. 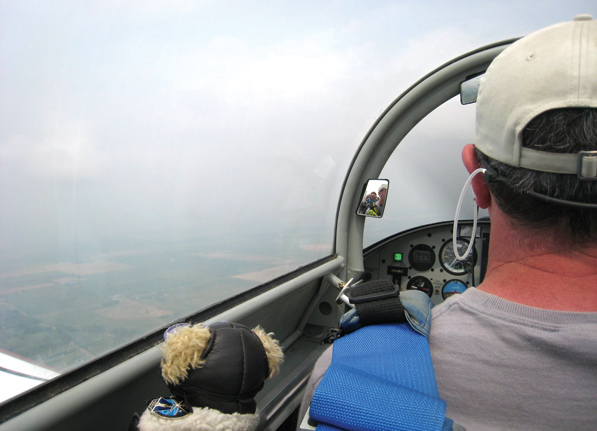 When the weather is just plain scuzzy, IFR can be awfully nice. You don’t have to worry about what is waiting for you at the other end of the trip.

The METAR had risen to 5 miles and 500 feet as I approached KCNM. Although I had the ILS plate on my knee, the center controller herded me into a hold over the VOR because he had a pair of B-1 bombers on a low-altitude route that impinged on the approach area. Apparently, they were trying to find each other out over the desert, and with no radar coverage out there, the poor controller was having to play "20 questions" to get them back together. I did two turns in holding as he tried to shuffle them out of the way, and finally cleared me for "the approach."

"What approach?" I wondered. I guess I am too used to a carefully controlled radar environment rather than having to pick my own. Because I was already at the IAF for the VOR, I slid down the inbound course and broke out right as advertised at 500 feet AGL, lined up perfectly for runway 32L. Total flight time was 3 hours, 20 minutes, and I still had 1+30 fuel on board. I was met by RV-6 owner (and cave explorer) Louise Hose and her friend Roger Holmen, another RV builder who was helping her troubleshoot a radio issue. Because I had arrived a bit early, I dove into the project, and while we didn’t solve it, we at least eliminated some potential causes. Sure enough, a few hours after my arrival, severe thunderstorms with hail and tornadoes descended on the area just as forecast. I was glad Louise had found a guest hangar for the Val before my arrival.

The caving? Well, it was spectacular, and at the risk of overextending the good graces of our local experts, I highly recommend the trip to anyone with an interest. I did some caving and lots of climbing when I was young, and I have never seen anything quite as grand. Sunday’s trip into Carlsbad was something I will remember forever. It is not often that you get to go on a private tour led by the person who wrote the trail guide (Louise), a person that did much of the exploring (RV-6 builder and local resident Larry Pardue) and the former National Park Service superintendent (Larry Henderson). The stories alone were worth the trip, even if I hadn’t seen the cave. If you ever get the opportunity, ask Pardue to tell you about reaching a passageway high in the ceiling of a massive chamber by using helium balloons to lift a thin cord up and over a stalagmite, then using that cord to pull up a climbing line, and then climbing that line in free space not knowing for sure the strength of the anchor. I could write a volume about the trip, but this is a column about aviation. 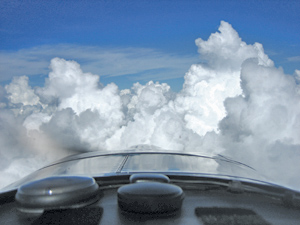 With this many antennas in the airplane, weather is no longer an unknown.

Sunday’s return was predicated on the weather staying stable as we explored Carlsbad Cavern itself. While the morning forecast was reasonable, we were out of touch with the surface until early afternoon, and I wasn’t sure what we’d find upon our emergence from the earth. Fortunately, the skies looked good, and the XM weather in Pardue’s car showed lots of breaks in the buildups across Texas.

I departed at a little before 3 p.m. local time, setting out VFR with good ceilings to follow my philosophy of staying under the bad stuff. The METARs along the way promised that I would be able to stay above VFR MEAs (minimum enroute altitudes), so I wasn’t too worried. I set out on a course direct for home, and once past Midland, I had to deviate south around the first area of weather. The only problem being that down low was a 30-knot headwind, but the RV is still fast. My technique is to use the XM weather picture to pick a clear line by scanning forward and back across the primary course, observing how the weather is changing, and then transferring waypoints into my EFIS manually. Or I just fly the autopilot in Heading mode to pick my way through the holes. Most of the time on this trip, I was in the clear, underneath a ceiling with good visibility and no rain.

Only when I reached the western edge of the hill country did I run into a real north/south line of storms that stretched from Del Rio to west of Fort Worth. By the time I got there, parts of the line were showing some pretty good storms, but about 30 miles south of my direct line, there was a clear passage of only level one precipitation. It was an easy passage, and I never even lost VFR visibility. I was down close to the MEAs, but having both terrain and obstacle data on the EFIS adds a lot of confidence.

After popping out the east side of the massive line, which stayed in the same spot for an additional 24 hours, I decided to take on fuel at Kestrel Airpark north of San Antonio. The gas prices were good, and I figured that I would rather end up at home base close to dark with more than 12 gallons of fuel, as I knew the clouds would get lower as night approached. Climbing out after the fuel stop, I made it comfortably to 7500 feet with a few scattered clouds below and a layer above. It was a nice, smooth ride for the 55 minutes it took to get home, now with a tailwind, and as I descended for the field, I could see the clouds getting lower as I approached the coast and its moisture-laden air. As I entered crosswind for runway 14, my 396 beeped and went into night mode as it computed the exact moment of sunset, so I guess I log that as a night landing! I rolled to a stop with an additional 3+30 on the clock since KCNM -headwinds can do that to you!

Once again, this wonderful trip was made possible by the wonders of the RV airframe and the magic of modern avionics-all coupled to some conservative judgment and a few years of weather watching. And once again, I am simply amazed at the capability given us by XM weather. I also like to think that the most important electronic tool in the entire airplane is my cell phone. If the weather goes below my personal minimums, I can retreat, land and call the office to tell them I won’t be home in time for my scheduled meeting, simulation or other "critical activity." There is always someone else that I can talk into taking my place.