Looking to inject new performance into the established Sportsman design, Glasair Aviation has created a new model by installing a turbocharged, 180-horsepower engine and making the switch from fiberglass to carbon fiber in the fuselage structure. The airplane’s traditional cro-moly steel-tube frame remains as before, though strategically beefed up to accommodate an increase in maximum-gross weight.

The engine, a variant of the parallel-valve Lycoming IO-360, is turbo normalized; that is, it retains its 8.5:1 compression ratio and makes its 180 horses at 30 inches of manifold pressure. It employs a sophisticated automatic wastegate and intercooler. The cowling is similar to the normal Sportsman item, though fitted with extra cooling louvers; the entire turbo system fits under the familiar outline. For the first prototype, the Sportsman TC is fitted with a two-blade Hartzell composite constant-speed prop. 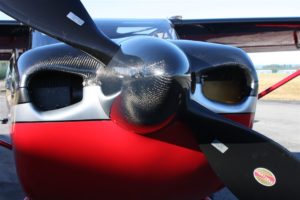 According to the company, “Advanced design and engineering changes, combined with the new carbon-fiber fuselage, have resulted in a 40 pound reduction in empty weight and a 150-pound increase in gross weight. This equates to an amazing 200-pound increase in useful load, which now totals nearly 1200 pounds. After his first flight to over 16,000 ft in the Sportsman TC, Glasair President, Mikael Via was all smiles, and praised the new airplane’s performance and capabilities. ‘I’ve always thought that the Sportsman had great performance, but I think I’m going to have to redefine “great.” Putting it all together—the airframe changes and carbon fuselage, the advanced turbo-normalized engine, and the big carbon-fiber Hartzell prop—the TC is a game changer for us.’ “ 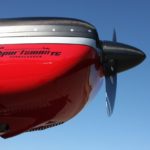 The aircraft has just flown, so full performance numbers are not available. The company estimates a cruise speed of 165 knots at 20,000 feet, burning around 9 gph while running comfortably at lean-of-peak mixture settings.

Prices have not been set, though it’s expected that the Sportsman TC will be offered in the Two Weeks to Taxi program alongside the regular Sportsman 2+2. It can be outfitted as a tricycle gear or taildragger model, and can be fitted with amphibious floats. Other improvements to the kit include high-intensity-discharge landing lights in the wingtips, LED nav/strobe lights, and integrated door locks.