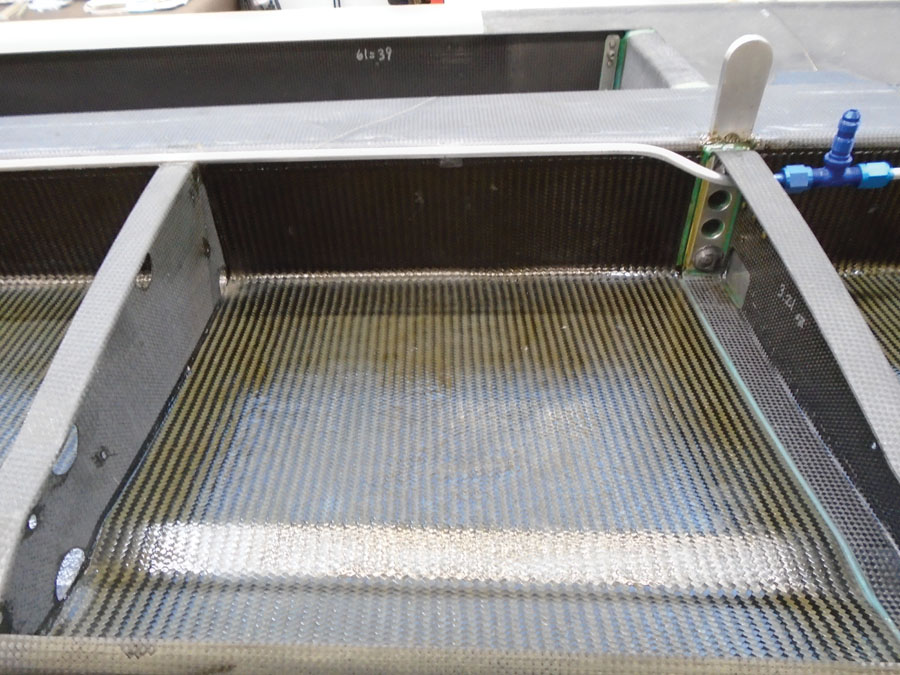 This is the penultimate article in the rapid prototyping series for now, and the last of our discussions on shop experiments. In the next article, we will look at a couple of opportunities for further education for those interested in learning more about composites and experimental design.

Last time we discussed some of the basic properties concerning epoxies. Based on that information, we conducted a set of tests designed to determine which epoxy would be best for a particular application, in this case the construction of a composite fuel tank. 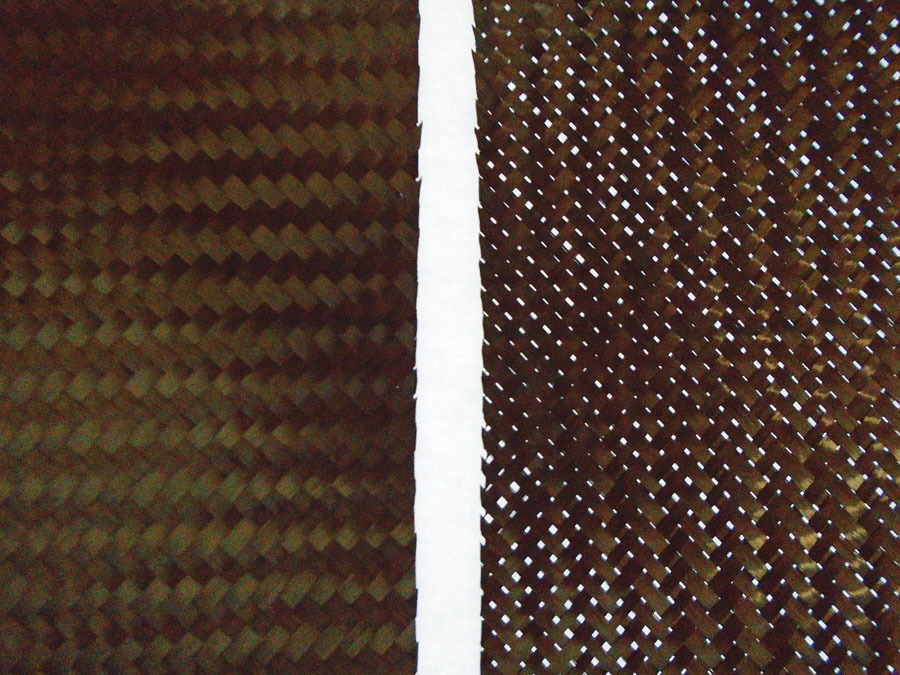 Which Epoxy to Choose?

Like strength, chemical resistance of epoxy systems is strongly tied (among other factors) to the degree of crosslinking achieved in the cured part. For this reason, when constructing composite fuel tanks, the biggest advantage you can give yourself is to (a) choose a system with a proven history of success when used for fuel tanks, and (b) post cure the tank to the highest permissible temperature.

The SR-1 race plane that has been the basis of this series has integral wing fuel tanks. One proven method of sealing such tanks is to use a novolac sealer like Rhino (Jeffco) 9700, which forms a thick (.05-.15 inch, depending on application technique and number of coats) surface coat for sealing the inside of the tank. This is the factory specified method used on Lancairs, for example.

Unfortunately this method is somewhat heavy and thus not ideal for the SR-1, which is a severely weight-critical aircraft. However, Rutan-style aircraft builders (Long-EZs, etc.) have successfully built wing strake fuel tanks without sealer for years. Based on personal and forum discussions on this topic, I decided to seal my tanks by applying (over the existing sandwich skin) a skim layer of neat resin, followed by another skim layer of resin mixed with cabosil (to the consistency of petroleum jelly), followed by a final layer of Hexcel PrimeTex 284 carbon fiber with an approximately 40/60 fiber/resin ratio. (If you have read previous articles in this series, you will recognize 40/60 as being a very resin-rich layup.) PrimeTex 284 differs from bog-standard 284 in having very low open area, thus minimizing pinholes.

The next question was which epoxy would be most fuel resistant? Now, I have no intention of ever putting alcohol-laced mogas into the tank (a major reason for tank failures, as alcohol attacks epoxy). But while some tanks are fuel proof simply by virtue of having walls thick enough so that any chemical degradation never has a chance to make a hole through them, the thinness of my sealing layer (about .020 inch) meant that I wanted to assure that I had the most chemically resistant epoxy coating possible. I therefore decided to test three different epoxies for chemical resistance.

Figure 1: Test Matrix. Two coupons were used for each test for a total of 54 coupons.

The test matrix consists of three epoxies, three post cure treatments, and three chemical environments, giving 27 test permutations, with two coupons per test (see Figure 1), for a total of 54 coupons tested over a period of 18 months.

According to various sources, E-Z Poxy E-Z 10 resin with E-Z 87 slow hardener is the epoxy of choice for fuel tanks for Rutan aircraft builders. According to EAA technical counselor and former Shell “Answer Man” for epoxy resins, Gary Hunter, E-Z 87 is the only aromatic amine hardener available for homebuilders, as compared to aliphatic and cycloaliphatic amines, which are more common in commercially available systems. While from a health and safety standpoint aromatic amines are nastier than the aliphatic/cycloaliphatic amines, they are superior for chemical resistance.

According to Gary, MGS 285/287 uses the aforementioned cycloaliphatic amine hardener, and is what I use generally for SR-1 parts, so I also wanted to test that system (it is also what the underlying wing skin is made with). Finally, I chose Jeffco 1307/3176, as it is a less expensive system that is popular among homebuilders.

All coupons were initially cured for 24 hours at room temp (approximately 85 F), followed by no post cure or a 24-hour post cure at 122 F or 176 F. Coupons were nominally 4.0×1.5x 1/8 inch, and were tested for Barcol hardness and weighed before being placed in a 16-ounce glass jar filled with either 100LL, 93 octane E10 auto gas, or acetone. The percentage of ethanol in the E10 mogas was 8.4%, as determined by a water admixture test.

Although one would not normally expect to have parts subjected to long-term immersion in a solvent like acetone, it was included as a means of examining the performance of coupons in a strong solvent environment, as a sort of proxy for a longer-term test. Whether this can be used to infer/extrapolate performance in a less harsh but longer-term environment is definitely debatable, and possibly specious. As Peter Meszaros of Airheart Distributing (North American distributors of MGS epoxy) points out by way of illustration, a paper towel soaked in acetone holds up just fine, but one soaked in water quickly disintegrates. So the acetone tests should be viewed in that light, but the results were nonetheless interesting and confirm Gary’s exoneration to builders that there is no substitute for post curing to achieve chemical resistance. 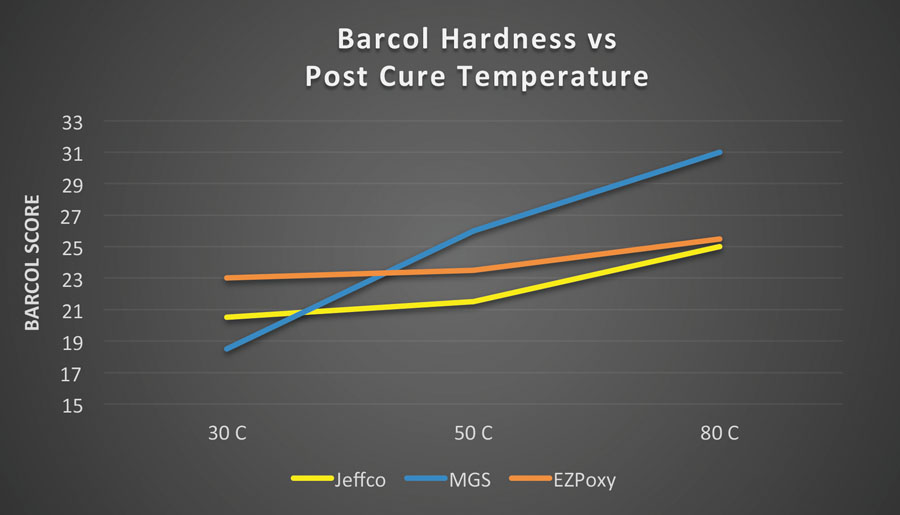 None of the coupons immersed in either 100LL or 93 octane E10 mogas showed any visible signs of deterioration. No particular difference among coupons based on brand or post cure was discernible. Almost all coupons, however, did gain weight over the period of the test, with weight gain from avgas being least and acetone being greatest. As can be seen in Figure 3, post curing reduced the amount of weight gain. 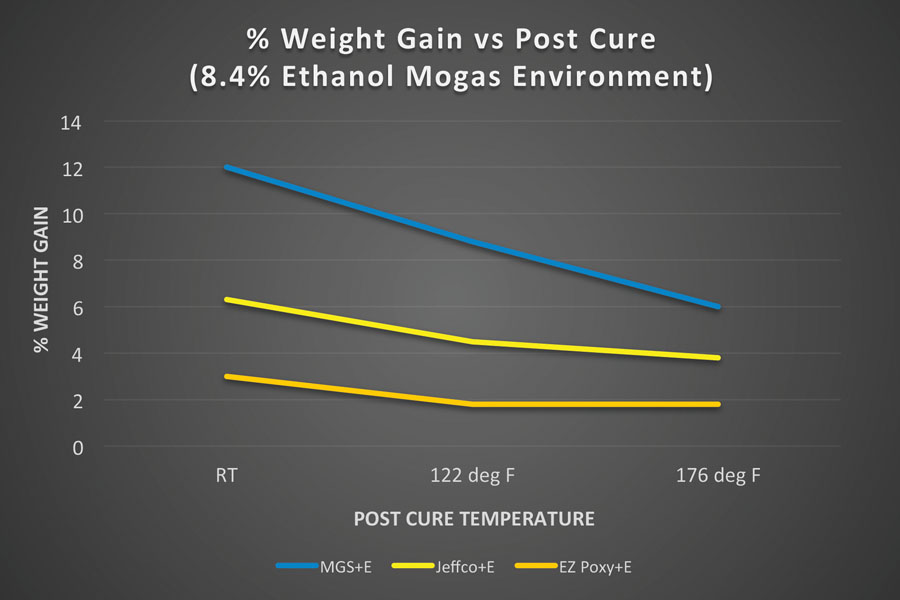 Coupons immersed in acetone showed degradation ranging from slight to severe. Figure 4 shows a graphic representation of these coupons, with degradation being given a number value based on a subjective assessment of the degree of degradation, with 1 representing no degradation and 4 representing severe degradation. E-Z Poxy and MGS performed similarly, but surprisingly Jeffco outperformed both. That said, differences in post curing had a larger impact on degradation than differences in epoxy brand. This again appears to confirm Gary’s position that the most important consideration when constructing parts for chemical resistance is achieving a good post cure. 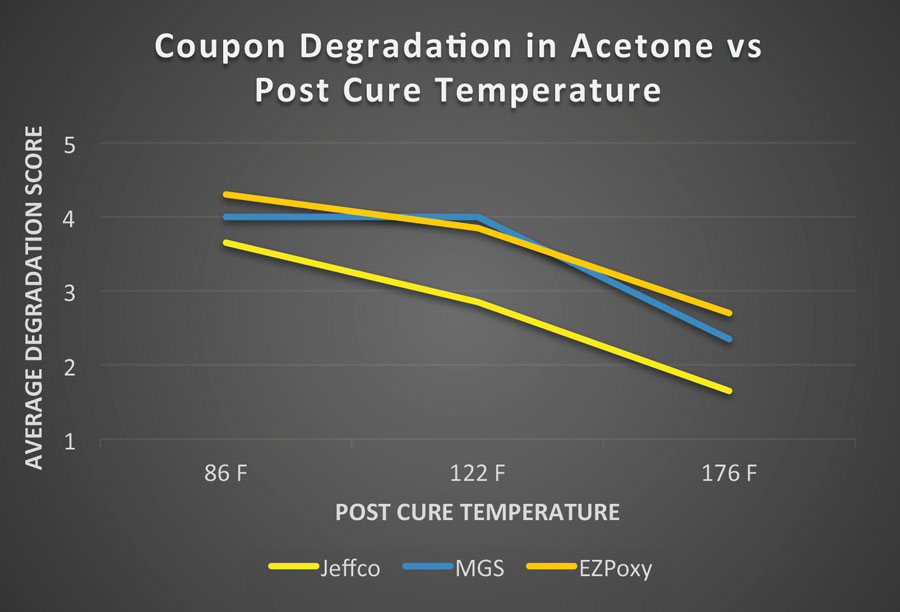 It should be noted that with only two coupons per sample, these results lack any statistical significance. The results should be interpreted as observed trends.

That wraps up our look into epoxy. Next time we’ll finish up the series with a look at continuing education classes by Abaris Technology of Reno, Nevada, and Micro-Measurements of Raleigh, North Carolina. Until then, happy building.

Acknowledgements: Many thanks to Gary Hunter and Peter Meszaros for answering my questions while I was preparing these epoxy articles. Klaus Savier of Lightspeed Engineering provided access to his post curing oven for the coupon tests as well as his Barcol hardness tester. Ricardo Stary, the 2016 SR-1 Project intern, fabricated the coupons.

The E-Z Poxy line of products has a long history of use in the aviation industry, being originally developed for the Long-EZ kit aircraft. Of the hardeners, E-Z 83B, 87B, and 92B are almost identical, with only a slight variation in accelerator to help vary gel time. The differences in fuel resistance between these three should be negligible.

E-Z 84B is a bit different. All hardeners have a similar resistance to diesel fuel (containing 5% biodiesel), with a slight advantage given to E-Z 84B over the 83B/87B/92B group of products. However, when exposed to gasoline (containing 10% ethanol) the E-Z 83B/87B/92B group of hardeners are definitely more fuel resistant than E-Z 84B. In addition, when directly exposed to solvents (50/50 isopropyl alcohol/xylene blend), 83B/87B/92B are almost twice as resistant as E-Z 84B. Bottom line, for the best fuel and solvent resistance use E-Z 10A Resin with either E-Z 83B, 87B or 92B Hardeners.

Note: Mike doesn’t mention post curing, which we have shown to be the single most important factor in chemical resistance. 83B and 87B have identical post cure Tg, so either one should be fine for use in fuel systems as long as they are appropriately post cured.

When starting my race plane project, I visited a friend’s composites shop and noticed a number of leather, lead-filled shot bags holding things down. Searching where to buy some for myself, I came across steel shot bags offered by Lowing Light & Grip (LLG). Adam Boeskool, the company’s product manager, donated a few bags to the SR-1 project in return for feedback that might help him develop a set of bags for the experimental aircraft industry. 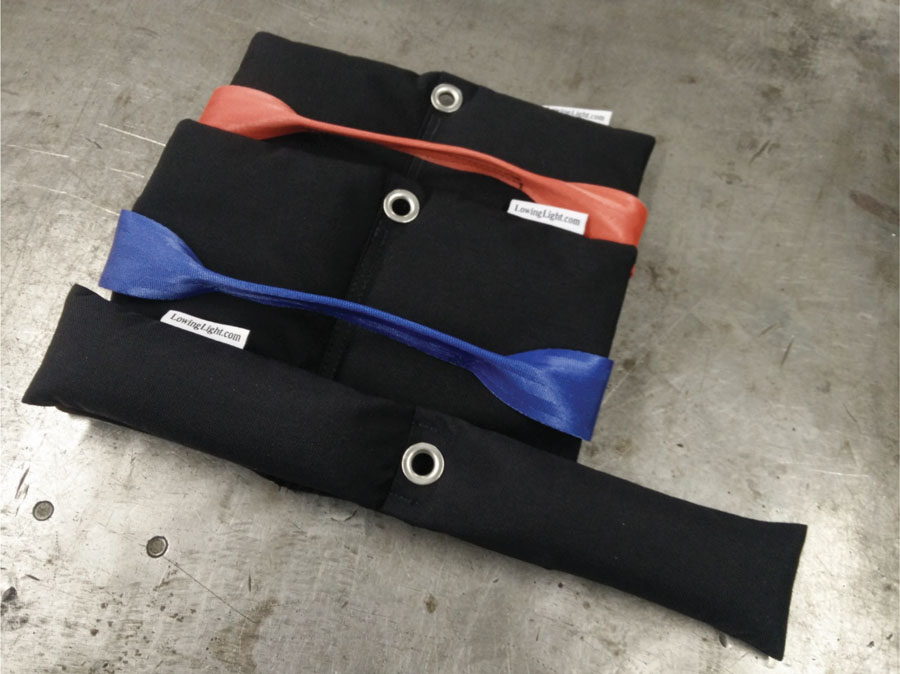 Lowing Light & Grip shot bag kit for homebuilders. The company makes shot bags for the film industry, but has supplied bags to big names in aerospace as well.

I find the bags incredibly useful. I mostly use them to stabilize things, for example when sanding, and also to hold templates and cloth in place when cutting carbon fiber. From a health safety point of view, I like that the shot is steel instead of lead. The butterfly grips make them much easier to pick up and move than handleless bags, and the canvas conforms nicely over parts. Mine were on the heavy side though, so I thought the shapes and weights could be improved for homebuilders. Based on that feedback, Adam put together a set of three bags (see photo) and shipped them to Jay Pratt at RV Central (a builder assist center) for additional feedback (Jay also received his bags free of charge in return for feedback).

Jay really likes his bags. “I don’t know how I’d live without them at this point. I use them almost every day for all sorts of tasks. I have a couple of 25-pound, round, metal-forming bags, but I don’t use them nearly as much as I now use these. They are just too heavy and not really the right shape. The LLG tube weight is fantastic for sanding, drilling, and deburring.

“I use them on the workbench more than anywhere else, and for composites work. For example, when riveting the stabilizer skins, the tube weight stabilizes the part so it’s much easier to rivet. And the fairings that come with the RV kits aren’t exactly known for the best fit, so when we rework them for a tighter fit, we lay up the fiberglass, put on a sheet of wax paper, then use the weight to hold it tight against the structure. We’ve done that with tail fairings and also the RV-8 canopy fairing, where I prop it up against the fuselage with a broom stick.

“I’m pretty amazed how much I have used them. I even use them for non-aviation stuff—I used one to help change a bike tire the other day.”

The shot bag kit for homebuilders is $115, plus about $35 for shipping. Would Jay pay that much for a set? “Well, homebuilders can be pretty tight. But knowing what I know now—yes, for sure. I’ve probably spent that much just on lead shot. I would recommend these to anybody; they are very useful.” LLG carries many other sized weights as well, which you can see at their website, www.lowinglight.com.

Kitplanes - August 19, 2022
0
KITPLANES editor at large Paul Dye takes you through a brief tour of the...